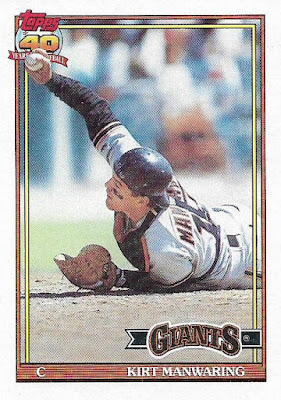 I'm happy to say that the two shoeboxes full of cards sold at the yard sale earlier today. The mailman, making his usual stop, spotted the boxes and said he knew a family with a kid who liked baseball.

The mailman then called the family and went on his way. Sure enough, a little while later, a van pulled up, someone got out, and bought both boxes of cards.

One person I know was not in those boxes of cards is Kirt Manwaring. Because you don't just give away a Kirt Manwaring card. Manwaring's birthday is today, so it's an appropriate time to honor his contribution to cardboard.

Manwaring may be a little too well-known for the Legend of Cardboard series, but really he had only one solid season at the plate, 1993 when the Giants challenged the Braves for the NL West title. Overall, he was an exceptional defensive catcher who struggled to get into the lineup regularly. He made up for it, though, by matching up his career with the 1990s, a decade particularly kind to catchers.

Out of all the fantastic cards of catchers from the '90s, I don't know if any can match Manwaring's. And if they do, it's only because they were Piazza or Ivan Rodriguez with an embarrassment of riches as far as cardboard. Manwaring enjoyed far fewer cards. But, he really did make the most of them. 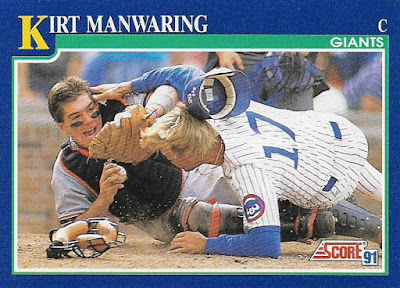 This is his most well-known card, with good reason. Manwaring has just been bowled over by the Cubs' Mark Grace in a home plate collision (remember those?), but he's still got that ball ... and the shit-eating grin. Mr. Grace, I think you may be out (I didn't do the research, I don't care about the research right now).

But this is just the start of Manwaring's legend.

Grace isn't the only player to appear on Manwaring's cards. 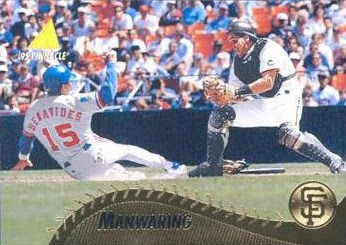 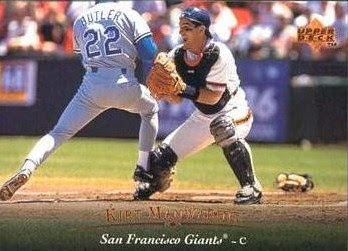 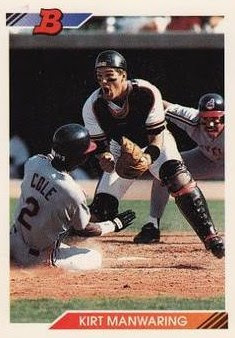 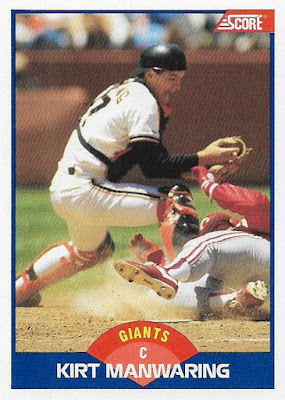 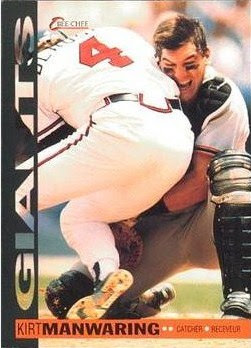 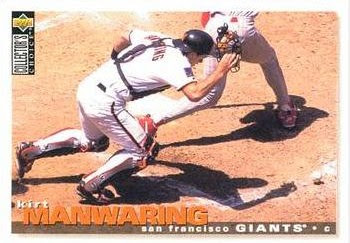 There's another Cincinnati Red (I think). And, heck, is that the Mets' Frank Viola?

That makes for some great cardboard.

It's two other things. 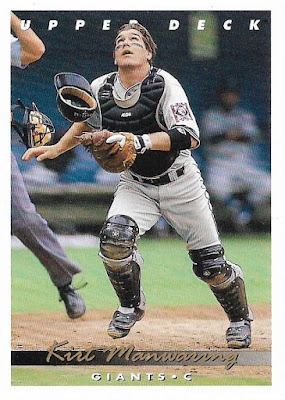 One, he appears to be always in motion. If card companies wanted to make you believe that Manwaring never stopped, even for a second, that he was a whirling dervish, with an abnormal obsession for tracking down foul pop ups, then they did an excellent job.

I've never seen one person chase down so many foul pop ups on cardboard. 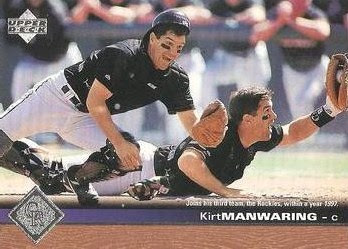 Two, Manwaring was very expressive out there on the field.

Action is action. It's exciting. But the only thing that makes it more exciting is the expressions of the players. If the player goes about his business in a grim-faced fashion, it's not going to make for the best of the best cards.

Manwaring didn't do that. Just about every play that he made on cardboard appeared to be the most shocking surprise to him: "WHAT???? I HAVE THE BALL????? WHAT???? ANOTHER POP UP????"

That is why he's a legend of cardboard.

A couple of more quick examples and then I'll get out of here. 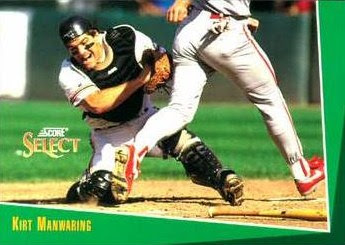 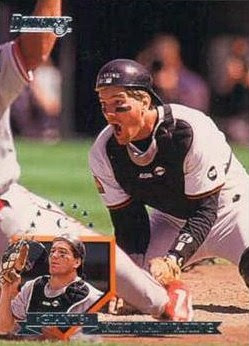 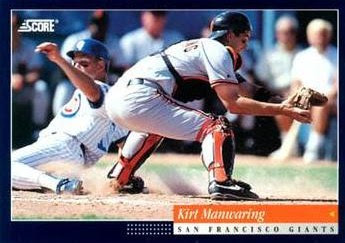 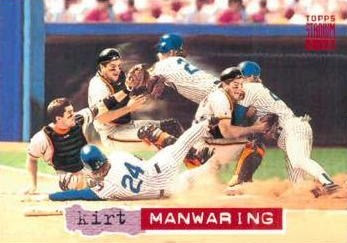 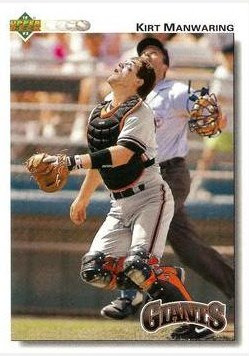 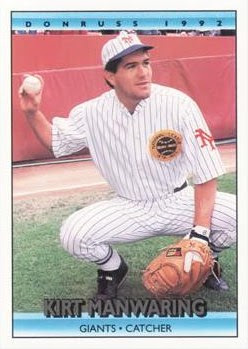 I threw in that last one just for giggles.

Just recently, the blog Bob Walk The Plank surmised that Jason Kendall, also a catcher, possessed some of the greatest cards. And, it's true, he does. Kendall even gets in some doozies on offense, which is Manwaring's weak point, partly because he didn't produce on offense like Kendall did.

Again, Kendall was more well-known and successful than Manwaring, so he could never contend for this series.

I mean just consider this for a moment:

Manwaring's career ended almost 20 years ago and his cardboard is still making an impression.

Also, he spent most of his career as a Giant, and here I am a Dodger blue patriot through and through, paying tribute to him. 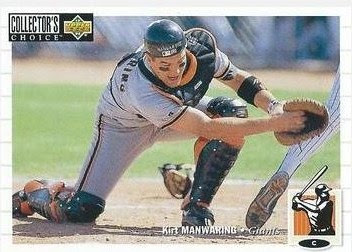 He's a Legend of Cardboard.

Big Tone said…
Back in the 6th grade ,we had a student teacher who used to brag about how he was good friends with Manwaring.I was probably the only student in the room who actually knew who Kirt Manwaring was lol. I'll never forget that.
July 15, 2017 at 8:34 PM

John Bateman said…
Great Post. Did the card company's conspire to get great shots of him. It does not seem like a coincidence. Did you ever run a series on who had the 10 best cards (or just the best cards ) in the 1970s. Off the top of my head I would think it was Johnny Bench (but it is easier to remember the SuperStars. Kent Tekulve comes to mind spanning the 1970s and 1980s.
July 15, 2017 at 10:18 PM

Nick said…
Manwaring is probably the single most represented player in my frankensets, and I'm convinced card companies had some little side bet in the early '90s as to who could produce the best card of him. My favorite is probably the multiple-exposure from '94 Stadium Club, though I'm also partial to the '89 Score because that's a Reds pitcher sliding into home (as indicated by the warm-up jacket).
July 15, 2017 at 11:16 PM

arpsmith said…
Great post! I have been meaning to do a post on Manwaring's great cards for a couple of years now and just haven't pulled it together. I was scooped on a Giants topic by a Dodger fan - I should lose my blogging license.
July 16, 2017 at 8:04 AM

Fuji said…
I tip my cap to you. You must have a photographic memory or something. How the heck does a Dodger fan remember all of these cool Manwaring cards? I barely remember him... let alone his cards. Glad you did though... because there are some awesome pieces of cardboard in this post. Like I mentioned on Matthew's post... I'm especially fond of the ones where the catchers are chasing down popups.
July 16, 2017 at 12:13 PM

acrackedbat said…
Great tribute to a guy who lived up to his name! I've recently begun collecting his cards after giving them away for years. I've been doing that a lot. My appreciation for the game and the catcher position has grown over the years. Kirt was fearless!
July 16, 2017 at 1:51 PM

Kin said…
Great post! You're 100% on point, he has some great action shots.

Bru said…
I'm not sure how I missed this one, but Nick V. linked back here and I just want to say that yes, I fully agree. This is a phenomenon that I have noticed for quite some time. Even his few Astros cards are really nice. 1997 Score and 1997 Topps come to mind - the latter shows him sprinting around the bases in a head-on shot. He looks like he's about to barrel someone over himself.
September 19, 2018 at 11:39 AM