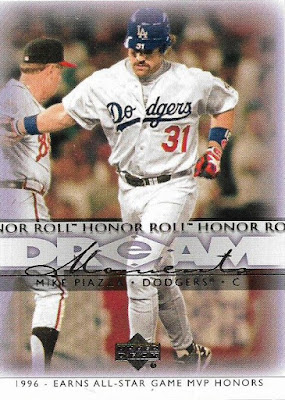 A couple of American League teams of little interest to me are scheduled to play tonight, but basically the All-Star break is here and All-Star Week has begun.

Although the lack of games this week is brutal (that extra day off on Thursday hurts me both as a fan and in my job), I've always looked forward to this week. I do what I can to honor it, and you can bet that there will be a few posts this week that at least make reference to it, if they aren't devoted fully to it.

I like to think that a few posts dedicated to the game itself is a more appropriate tribute to the Midsummer Classic than red-carpet gimmickry and home run derbies. Two years ago, I dedicated a full week of posts to the All-Star Game. That may have been a little over the top, but not nearly as much as treating baseball players like Hollywood celebrities and/or superheroes.

I will not be watching any red carpet stuff, and my only viewing of the home run derby will be to gauge when it's ending for work deadline purposes. My sole devotion is to the actual game, as watered-down as it has become.

Today's all-star tribute is to the All-Star Game from 1996.

That game happened this very night 21 years ago. It is the last All-Star Game to be completed on July 9th with a winner. The 2002 All-Star Game also occurred on July 9th but that ended in a 7-7 tie and led to a string of nonsense that we're still dealing with today. (This is the 15th anniversary of that).

The July 9th, 1996 game holds a special place in my heart as it was the last All-Star Game that the National League won until 2010. It's also the most recent All-Star Game in which the MVP was from the Dodgers.

Mike Piazza launched a solo home run off of Charles Nagy as the first batter in the bottom of the second inning. The next inning he drove in Barry Larkin from third base with a double. And because of that, Piazza was named the catcher on my All-Time All-Star Dodgers team.

Enjoy the festivities this week, whether you're all about the hype and gimmicks or about the game. It's a fun week, regardless.

But by Wednesday I'll be wondering where my baseball went.