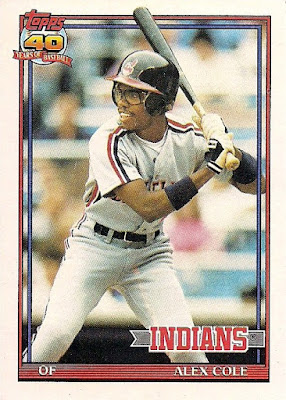 I am already putting the integrity of the "Legends of Cardboard" series on the line with this selection. I am assuming that a fair amount of the general baseball public knows who Alex Cole is.

The "Legends of Cardboard" premise is based on the fact that these are major league players almost forgotten by time who still managed to generate terrific cardboard. So with some trepidation, I looked into Cole's online background and actually came across this introduction: "if you don't remember Alex Cole, nobody can blame you ..."

Good enough for me.

Oh, sure, there is probably some Indians fan out there who remembers as a 12-year-old when Cole stole five bases in a game in 1990. But Cleveland was second-to-last in attendance in 1990, so I believe nobody really noticed.

Most references to Cole are obviously freshly researched pieces as they recount his brief, flashy career, his blazing speed, the Indians' doomed plan to move the fences back to accommodate Cole's quickness, his appearance on the first Colorado Rockies team, his bouncing from team-to-team, his problems hitting and fielding, and, sadly, his arrest for intent to sell heroin after his MLB career ended.

And with that, general baseball fans are caught up to date.

But card collectors were never out of date. They knew about Alex Cole all along. He has some of the most memorable cards of the junk wax era. And that is because of one thing: 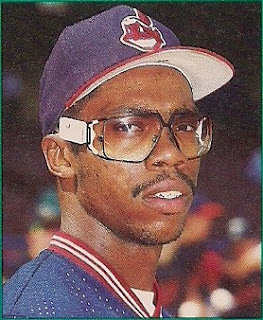 Alex Cole wore them like MC Hammer was coming for inspections. And Cole donned those goggles for the life of his baseball cards. Although his major league career lasted only from 1991 to 1995 and he was done by the age of 30, his cards are in abundance, and he's wearing goggles on every one.

If you read those non-cardboard accounts of Cole, they'll mentioned his goggles as a side note: Yes, his goggles were cool, now let's get back to these very important statistics about how Cole couldn't hit. But card collectors know that the goggles were everything. There is nothing else. Just goggles. 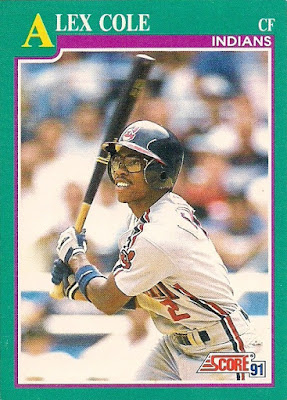 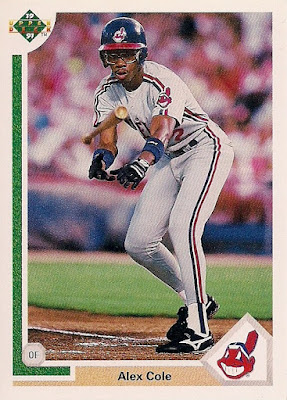 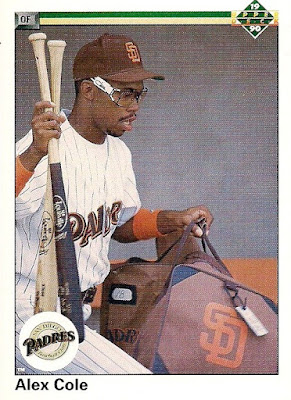 Goggles make his cards memorable -- unforgettable even. They turn a run-of-the-mill baseball card photo into something with character. They bring comedy to the card. Goggles are collectible all by themselves. You don't need cold hard stats when you have goggles. Five career home runs? Who cares? Goggles! I want all the Alex Cole cards! 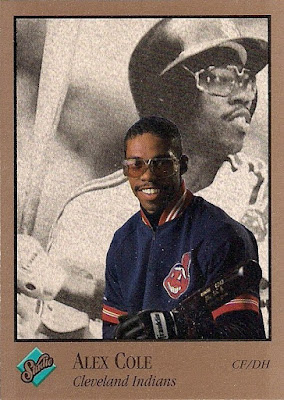 Alex Cole has three of my favorite cards of the junk wax period. I'll start with 1992 Studio. If you look at the card quickly, you'll swear you saw Willie Mays Hayes -- only with goggles.

Cole is supporting goggles twice in this photo, a personal record for him, which was later equaled by appearances on mid-1990s Flair. And for an extra bit of insight you can turn the card over:

Yes, Cole liked House Party 1 and 2 equally, Rotten Tomatoes be damned. But the more important factoid here is Cole was a big fan of Wesley Snipes, who also happens to be ... Willie Mays Hayes. Uncanny. 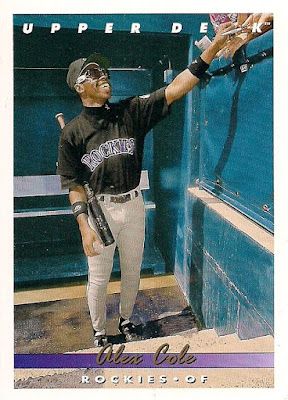 Favorite card No. 2. If you know me, you know how much respect I have for 1993 Upper Deck. Well, hold on to something, because this is one of my most favorite cards in the entire '93 Upper Deck set. That, fellow readers, is doing some damage.

Why do I like this card so much? Well, it's the obvious exchange between a player and fans. And it's more than that. It's Cole pausing at the dugout steps, bat under shoulder, on his way to work. It's the joyous smile on his face. It's the goggles. 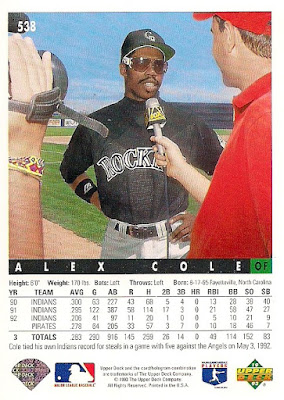 The back shows a more serious-minded Cole, plus outdated interviewing equipment. And goggles. 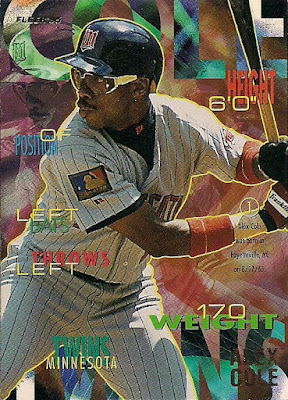 Favorite card No. 3 is from 1995 Fleer, also known as the "acid trip set". This is a bit of unfortunate foreshadowing as Cole would be sentenced to 18 months in prison after pleading guilty in 2002 of conspiring to possess and distribute heroin. He was playing for an independent league team when he was arrested. I am going to assume he was wearing goggles.

There are a number of great Cole cards that have eluded me so far. Just a few: 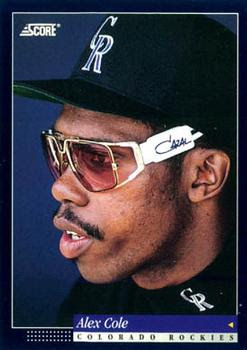 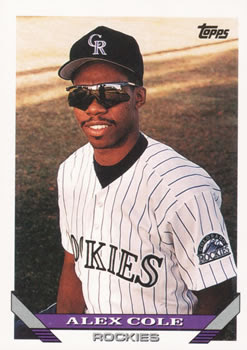 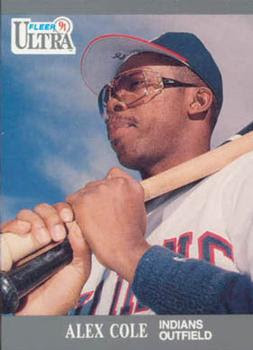 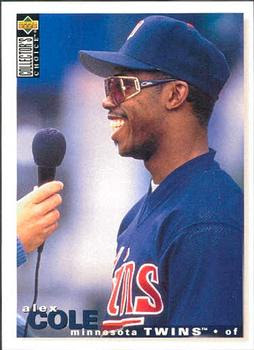 And there is this one from his pre-major league days that I absolutely must have: 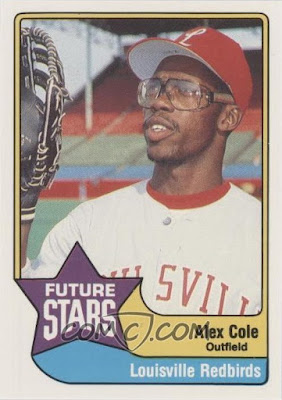 The point is, every Cole card was an interesting card, simply because of his choice of eyewear. By the mid-1990s, Cole's "You Can't Touch This" goggles had given way to Locs sunglasses, but Cole stayed with what worked, and his cards were better for it.

For a less-interesting-looking dude, you could talk OPS for BABIP or -- pour another pot of coffee -- weighted runs created. For that dude, his appearance isn't going to carry the card all by itself.

But for Alex Cole, that wasn't necessary. Because of a single fashion choice, he is a Legend of Cardboard. 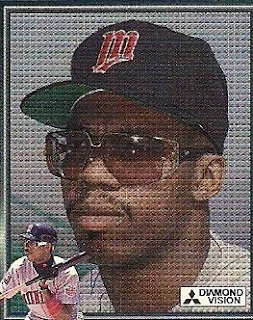 Jamie Meyers said…
Cole has a special place in Connecticut baseball lore since when he was arrested for the offense you mentioned, the cops busted him in the locker room at Harbor Yard in Bridgeport, where he was playing at the time. I can't quickly find a photo of him from the Bluefish but I'm guessing he was wearing googles too. After serving his sentence he got hit with a lawsuit for running up $30 K in credit card charges against a friend's card. Real stand-up guy.
July 6, 2015 at 8:42 PM

BobWalkthePlank said…
Someone needs to start wearing eyewear like this again. Every card bloggers head would explode.
July 7, 2015 at 7:50 AM

Fuji said…
This post is proof that I don't take enough time to appreciate a card's photography. I collected most of these cards... and have no recollection of Mr. Cole. Long live Alex Cole cardboard!
July 7, 2015 at 9:39 AM

Jason Presley said…
I seemed to accumulate a lot of his 1989 ProCards Louisville Redbirds and 1990 Fleer cards. Looking at my Sportlots inventory, I'm only showing 4 & 5 respectively, but I swear every time I would sort cards, one of those two cards would somehow turn up.
July 7, 2015 at 2:02 PM

Anonymous said…
Surprised there's no card showing him on the basepaths. His goggles are awesome though. I miss the old days when you'd see players with glasses on cards all the time.
July 7, 2015 at 3:32 PM

defgav said…
I was into speedsters back then, so I was a fan of Alex Cole, Vince Coleman, Rickey, Lofton, and the like. Loved that "year zero" 1990 UD Padres card, in particular. Bummer he never really put it together.. and then ran into legal problems. Hopefully he's turned his life around in recent years? He was the subject of a silly Baseball Card Vandals card a few months ago.. so there's that!
July 8, 2015 at 3:30 PM

Unknown said…
Alex Cole was ridiculously fast, too bad he couldn't hit to save his life. He was one of those speedsters that if he worked on his hitting could have been a real hood player. The Eric Dickerson goggles were rad though.
August 1, 2019 at 7:09 AM