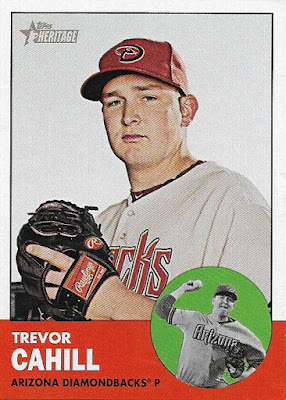 Topps released its 2015 Heritage High Numbers checklist today. I'm a little more interested in it this year because you're actually going to be able to buy these cards in packs from a store, instead of the online exclusive goofiness of past years.

I scanned through the checklist, and as I panned down the page, I grew more and more hopeful that there would be no Dodgers in Heritage High Numbers. I'm still trying to chase down Dodgers from the regular Heritage set.

This is the point when the good, faithful Dodger fans reading this raise their hands and say, "But wait, Mr. Night Owl, Trevor Cahill didn't play for the Dodgers."

Yes, of course, Cahill didn't play for the Dodgers. Yet there he is in Heritage High Numbers, listed as a Dodger.

The Dodgers signed Cahill to a minor-league deal in early July this year. He pitched rather poorly in 34-plus innings for a 5.24 ERA for L.A.'s Triple A team in Oklahoma City. Then, in early August, he opted out of his contract with the Dodgers, never wearing blue in a big league game.

So, apparently, the time for putting together the Heritage High Numbers set is in July, and then there's no going back on the photos when August hits.

I'm not thrilled about collecting a non-Dodger Dodger when it's getting more and more difficult each year to track the actual Dodgers. But I'll do it, because something about that "Los Angeles Dodgers" on the front and the photoshopped cap makes some part of my brain believe that this is a Dodgers card.

Besides, it's not the first time -- nor will it be the last. with the way teams like the Dodgers rapid-fire sign and release players these days -- that a player appeared with a club on a baseball card but never played for them.

There are loads of examples of this, including this famous one: 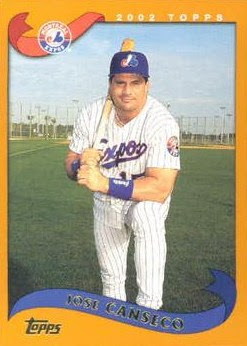 And seeing Canseco as an Expo makes me want to add this card to my collection.

We team collectors are such suckers.

Zippy Zappy said…
I'm very familiar with this predicament and I'm often left wondering if there's a line between a team and an organization. And if there is why the line is so blurry.

Jeff Jones said…
I too have this problem, Trevor Cahill was awful for us as was Eric Stults. He still on the roster?
September 21, 2015 at 9:08 PM

AthleticGigantes said…
I understand the dilema. However will you remember why you collected the Cahill card 20 years from now? Sometimes when I look at my old baseball cards I wonder why I included a certain card with others unless I place a note to remind me in the future.
September 21, 2015 at 9:09 PM

Tony Burbs said…
Cahill is working out pretty well for Chicago. Couldn't they at least do one of their patented poor photoshop jobs? I mean, at least he's pitched for the Cubs this year.
September 21, 2015 at 9:29 PM

Cardboard Jones said…
At least he didn't pitch for your team- be thankful for that. I would happily accept his inclusion if it had meant he hadn't pitched for Atlanta. He did- and he sucked.
September 21, 2015 at 10:01 PM

Nick said…
I've devoted much of my life to tracking down these types of cards.

Stubby said…
The one that always confused me as a kid was the '68 Dick Kenworthy. There he is on his '68 card, designated as a Met. Yet virtually his entire career--major and minor--was spent with the White Sox. The Mets purchased him conditionally and then returned him, as it turned out. Coming out of '67, the word was that Ed Charles was toast, that he'd either retire or be released. And the Mets had said all the right things about Kenworthy. Heck, he was going to play every day for the Mets in '68. Get that card in the set! Except he didn't impress in spring training and Ed Charles did.

Now I just feel sorry for Kenworthy. His lone contemporaneous baseball card (and the OPC and Venezuelan "parallels") shows him with a team for whom he never played. That's gotta hurt.
September 22, 2015 at 12:04 AM

madding said…
This always frustrates me considering how many players there are out there who get plate or mound appearances with your club and no baseball card to show for it.
September 22, 2015 at 3:21 AM

Fuji said…
I need to check to see if I have that Canseco sitting among the thousands of Expos' base cards I've accumulated over the past few years. That card is awesome!
September 25, 2015 at 3:06 PM

Mike Matson said…
Seeing that Canseco Expos card means I'll eventually (hopefully) have him as both a Jay and Expo..
September 27, 2015 at 10:19 PM