August 09, 2015
I don't know about you, but around here antique shows far outnumber card shows.

In general, I have a faint appreciation for antiques. Old stuff is always interesting, except when you start getting into drapes or blankets and then it gets kind of creepy. And speaking of creepy, nobody wants your ancient clown dolls or oversized baby head paintings.

But, for an hour or so, I can amuse myself with looking at old furniture or toys or wall hangings. Not that I'll buy any of it because it's far too expensive.

It also falls under the heading of I DON'T HAVE ROOM FOR THIS STUFF, which is why I collect cards. I have a lot of cards, but probably, if I really, really tried, I could get them all into one small room in my house. If I collected antiques, a couple of shows would force me out of that small room.

I usually don't bother with antique shows because the chances of cards being there are very slight. But, as you know, card shows have been disappearing at a rapid rate around here. So desperate times ...

There was an antique show today in the very same spot that there used to be a card show every summer. It's held in a hockey rink by the river in a summer vacation town near me. Still disappointed about not being able to drive to that town on a cloudless summer day and shop for cards by the river, I decided to chance it. So the wife and I hopped in the car for an afternoon of antiquing, but not really antiquing because we have no money.

Since it's August -- the worst time to buy cards that isn't December -- I grabbed a meager amount of cash and we set off.

I could tell it wasn't a card show right away because it cost 7 bucks per person to walk into the place. Don't they know that's one less rack pack that I can buy?

But we ambled in with our nifty blue wrist bands and were greeted with the usual junk ... I mean, antiques. Benches and chairs and mirrors and walking sticks and doorstops and jewelry -- practically a full landfill of jewelry.

I let my wife take over because she likes some of that stuff a lot more than me. And I wandered through content with nothing more than a pleasant drive and a day without work.

We traveled down one aisle, back up another aisle, and down one more aisle, wandering through various stations. Every time I saw a small table of books or magazines, my card senses perked up. But except for one space that featured those drinking glasses with cards on them (a rookie card Brooks Robinson, a '73 Joe Morgan), there was nothing that resembled trading cards.

Since this was a hockey rink, there was an upstairs area where fans sit during games. I noticed right away that there were dealers up there, and I felt sorry for them because they probably didn't get much traffic, considering most of the clientele didn't look too capable of climbing stairs.

We decided to see what was up there, and I glanced over duck decoys and old fishing lures and ancient sewing machines. We turned around and at the second-to-last table in the whole place, I saw a small area of baseball cards among a bunch of pricey paintings.

They were in top loaders, stacked up as a display. In front of those was a glass case with some cards I couldn't afford. A '56 Harmon Killebrew and a few others that were soon dwarfed by a $1,000 Christy Mathewson tobacco card.

I quickly turned my attention to the top loaders.

They were all pretty interesting cards, ranging from Play Ball from the '40s, through the '50s and '60s with some stray '70s cards added. If I had money to throw away, I'd have grabbed a bunch for trade bait. But I zeroed in on my collecting interests.

Toward the back was this card: 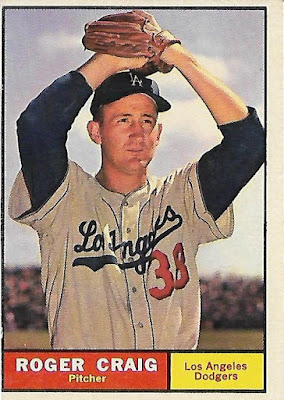 I recognized it instantly as a '61 Dodger that I didn't own. I figured that it had to be a high number.

The price on it was pretty cheap for a high number, even with the card severely off-center. 1961 high numbers go for something like this:

And that's the book from a few years ago.

I gave the card to the dealer, who was looking down at the traffic below him. He took ahold of the card and said "ah, Roger!" as if he knew the guy. Then he gave it back to me and cut the price on the card in half.

Caught off guard by this development -- I hadn't expected to find any cards at all remember -- I went back and found another card that interested me. 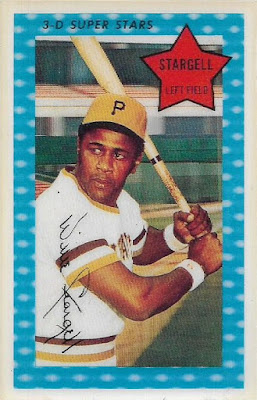 Kellogg's cards without cracks are almost the greatest cards on earth.

The pleasant dealer looked at that card and took 10 bucks off that one, too, which again is less than you can find it online.

I almost went back and grabbed a third card that I wanted -- a 1963 Post Maury Wills -- and am kicking myself for not doing so, but I had to remind myself it was August.

And for it being August, and it being an antique show, and there being very little money in my pocket, these two cards were well worth the trip.

The only thing is now I'm going to have to go through every antique show in the state.

One thing I keep being told by people who collect "antiques" is that people are trying to blur the line between "vintage" and "junk that just happens to be old."
August 9, 2015 at 8:15 PM

Scott Crawford said…
I didn't see a lot of them, but the cards I found at the Brimfield show were of pretty high quality. Antiques shows (and shops) are always worth at least a look.
August 9, 2015 at 9:25 PM

Adam said…
Antique shows are fun if nothing else just to walk through. There are a few antique malls in my area I've been meaning to hit up but I'm like you right now, I have zero extra money to buy cards with. I'd say for the $7 admission fee, you did quite well.
August 9, 2015 at 10:15 PM

Community Gum said…
Very cool. The few antique shows I've been to are really excuses for local etsy dealers to peddle their wares with a couple furniture refurbishers mixed in. I think the most interesting part of the story is that a price guide is actually an accurate representation of the prices.
This reminded me that there's a massive antique show in September near my home town. I may have to convince the wife to make a trip.
August 10, 2015 at 1:26 AM

Tony Burbs said…
Every antique show or shop I've ever been too, the only baseball cards they ever have are '88 Donruss and the like and they want what you just paid for those beauts for a Cal Ripken base card... I think the actual dealers might be antiques too.
August 10, 2015 at 8:19 AM

The Lost Collector said…
Makes it all the better when you unexpectedly find cards. Well done!
August 10, 2015 at 9:21 AM