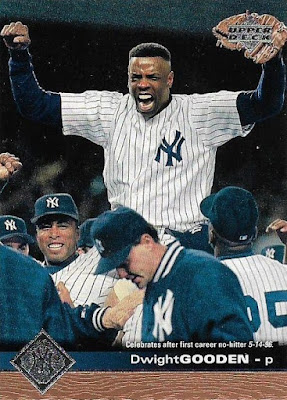 After yesterday's post, I have this modest bit of no-hitter research sitting here on a post-it note when it should be properly presented out in the open so anyone can look at it and twist it into whatever they like.

So, without further ado, a list of how many times each major league team has been no-hit in the last 40 years, separated by division:

-- Every major league franchise has been no-hit in the last 40 years (if we lump the Nationals in with the Expos, that is. The Nationals, since they've been know as the Nationals, haven't been no-hit). The Cubs ensured that I could say that when they were no-hit by Cole Hamels earlier this year. It was the first time the Cubs had been no-hit in 50 years.

-- The no-hitter is the best "you never know" (to quote Joaquin Andujar) moment in baseball. The time that has passed between some teams being no-hit is crazy. The Reds hadn't been no-hit for 39 years until Roy Halladay blanked them in the playoffs in 2010. The previous time they'd been no-hit was when Rick Wise pitched one against them in 1971. The previous team to be no-hit prior to Wise's no-hitter against the Reds? The Reds -- twenty days earlier.

-- The Rays have the most devastating cluster of no-hitters thrown against them in the last 40 years. They have been no-hit victims in 2009, twice in 2010, and in 2012. Not to mention the indignity of being no-hit by Edwin Jackson.

-- Now that the Cubs are out of the way, the team that has gone the longest without being no-hit is the A's, who were last no-hit in 1991 by a foursome of Orioles pitchers. The last single pitcher to no-hit the A's? Nolan Ryan with his sixth no-hitter in 1990. The other team that has gone a long time without being no-hit is the Red Sox. The last time they were no-hit was in 1993 by Seattle's Chris Bosio.

So that's a little glimpse of what I think is interesting.

I promise I won't talk about no-hitters in the next post.

Night Card Binder candidate: Dwight Gooden, 1997 Upper Deck, #120
Does it make the binder?:  No. As interesting a card as it is, it can't beat this.

Brett Alan said…
I don't think your "this" links to what you want it to. Unless it's a problem with my browser....

BobWalkthePlank said…
When Scherzer no hit the Pirates this year that was all I was thinking. "Hey, at least this guy is good all the time."
August 24, 2015 at 8:04 AM

Stack22 said…
Wallach is a magnet for no-hitters, both for and against. He was involved in at least six as a player, I haven't been keeping track how many he's been part of as a coach.
August 24, 2015 at 11:10 AM

Steve at 1975BaseballCards.com said…
No hitters may be meaningless for stats, but they're fun to watch live when your team's delivering. I missed seeing the Mariners/Orioles no hitter in the stadium by just a few days...
August 24, 2015 at 11:23 AM