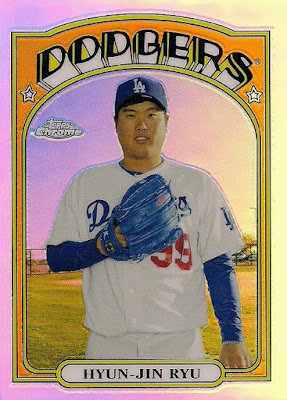 I have no shortage of kinds of cards I collect. Although my collections are not as eccentric as some, it keeps me busy.

I really don't need to be adding anything else to that list, especially something that I have collected once already.

But, Lord help me, I'm doing this.

Ever since Topps started putting old cards in current product and placing a silver stamp on them, I've treated them with amusement. Well, first I was annoyed, but now it's nothing but amusing -- how these stamped cards from my childhood are treated as golden, unobtainable, "hits" in Topps products. A card that I bought from a 10-card pack for 15 cents is now a hobby box hit.

That means cards from 1975 Topps, now featuring stamps on them and called "buyback cards," are being pulled out of hobby boxes, and some (not all) are treating them as if they're hits.

That is so wrong. And amusing at the same time.

That's it. It's time to see if I can collect a full set of 1975 Topps buyback cards.

It's ridiculous and amusing, mixed with 1975 Topps, my favorite set. And I can find one whenever the mood hits and not care whether I get another one for two years because I have the complete set of non-stamped 1975 Topps cards right here!

Whenever I've seen a 1975 buyback card pop up on the blogs, I've left a comment asking whether a transaction is possible. And that's led to a couple buybacks in my collection here and there.

Just a few days ago, Robert of $30 A Week Habit sent me some cards and included three 1975 Topps buybacks.

Let's see them in all their weirdly stamped glory. 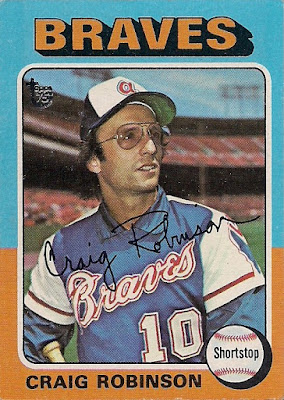 Craig Robinson, bewildered by the presence of a tiny "Topps 75th" foil stamp buzzing around his head. 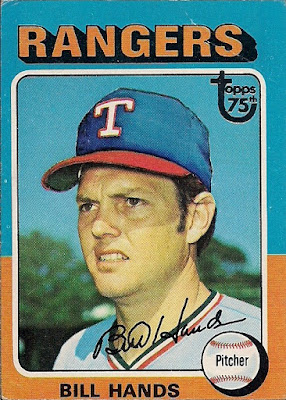 Bill Hands, now not only irritated by the airbrushed Rangers cap on his head but the much LARGER "Topps 75th" foil stamp hovering nearby. 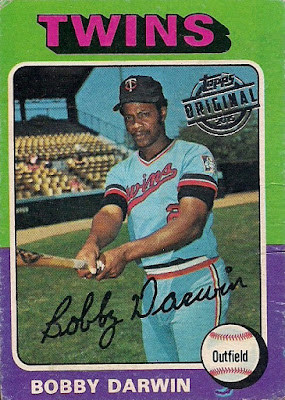 And, Bobby Darwin, who doesn't want none of that "Topps Original" stuff. First of all, what happened to the Topps 75th stamp? Second of all, why do we have to mention it's Original? Are people faking 1975 Topps Bobby Darwin cards?

The different logos, the ridiculousness of it all, the fact that Topps could have just placed a 1975 Topps card in the middle of a 2015 Topps hobby break and almost anyone would be just as happy/disinterested, adds to the amusement of the whole thing for me.

Robert sent some other cards with the buybacks, for my "real" collections. 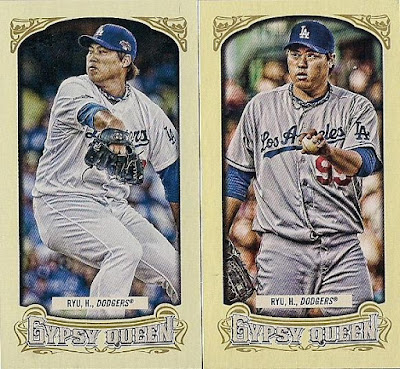 Two 2014 Gypsy Queen Hyun-Jin Ryu minis. I'm assuming one of these is the short-print mini. I don't know which one that is because I pay little attention to GQ. Which means some GQ fan just exclaimed "THIS GUY DOESN'T EVEN KNOW WHICH ONE IS THE SHORT-PRINT! I CAN'T BELIEVE THIS!"

Sorry, bud. You can't have the card. Whichever one it is. 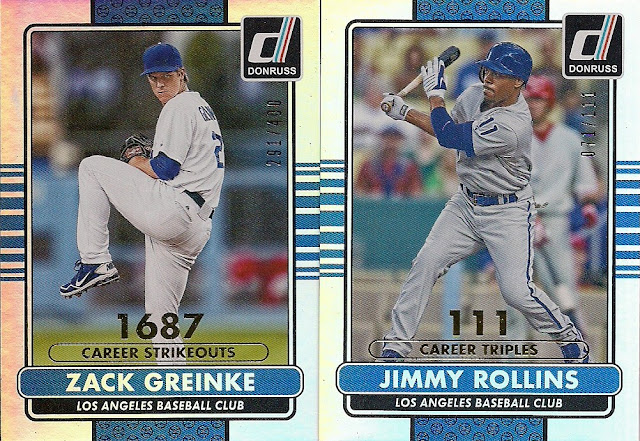 Ah, yes, the Dodgers from sets I refuse to buy are coming fast and furious now. These are numbered parallels from this year's Panini Donruss set in the fashion of the Donruss sets from the early aughts or late '90s that did this kind of stuff.

I'm hoping Robert found these in a card show and didn't buy a case of Panini Donruss to unearth them. If so, maybe that's why we haven't heard from him in a week. 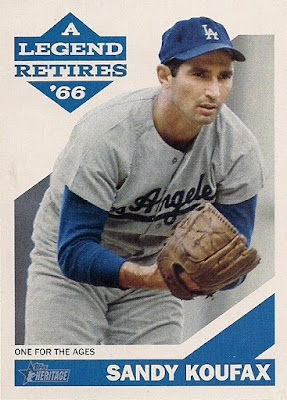 This is my second "Legend Retires" Sandy card. Only 13 to go. It also uses a headline that I've leaned on a time or two: "One for the Ages". Now that I've admitted that, I can never use it again. 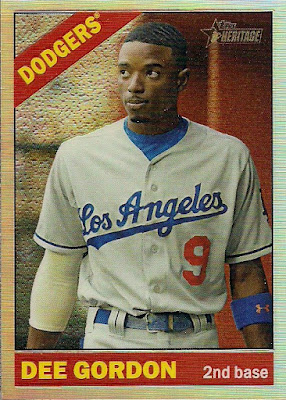 A shiny Dee. Gordon's come back to earth and is hitting a mere .368 right now. 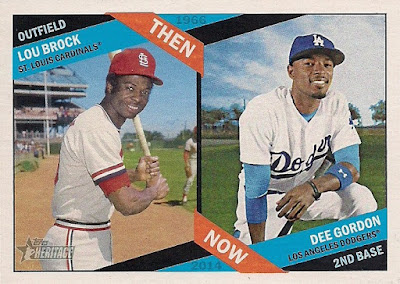 More Dee, this time with Lou "How Could They Let This Guy In The Hall Of Fame" Brock. That's not my opinion. I've just heard it a time or two or 450. 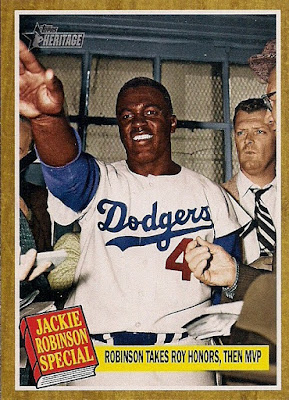 Finally, one of the Jackie Robinson short-prints from 2011 Heritage. And, look! A different Jackie photo!


So, Robert provided lots of stuff for the Dodger collection, which I'm very serious about, by the way.

The '75 buyback thing is kind of frivolous. But that doesn't mean you can't think of me if you turn up one of those '75 buybacks. I actually do want them.

I mean what else are you going to do with them?

P.S.: Robert knew it all along:

I love buy back stamped cards. Love them. I will take any and all that someone pulled and is disgusted to look at.
June 4, 2015 at 8:49 PM

Zippy Zappy said…
You're never going to be freed from a 1975 Topps related mission are you?

Robert said…
N.O., I'm glad that the cards made it safely to you. I did find the serial #'d Donruss at a show (case breaking, or even pack breaking isn't really an option for me at the moment).

If I remember correctly, the buybacks were just a quarter apiece. A small price to pay to watch the magic of people sending you the '75 buybacks in droves.

Brian said…
That's quite the Quixotic Mission - I'll keep an eye out for you for stamped '75s as well!

chuckneo said…
I love this. If my baseball cards weren't all in disarray because I just moved, I'd be going through to find if I have any 1975 stamped cards to send you (I don't think I do though).

Stack22 said…
Are you sure there is even a complete set to be had?

I like the idea of the Topps buyback, but hate the execution. They should be much more abundant. Younger collector's might take more interest in vintage if they were pulling one in every other pack.
June 5, 2015 at 9:10 AM

BobWalkthePlank said…
Good luck on the mission. Did they do the entire set? That would be quite an accomplishment to finish.
June 5, 2015 at 9:14 AM

GCA said…
Was just thinking that I haven't considered listing all the things I'm collecting at one time before, but then I realized, yes I do - it's called my want list website! Long pages of baseball, football, and hockey set wants, 50+ baseball, a dozen or so football and one hockey player collections, and one football team hoard (not listed). Plus a T205 team set, some non-sports astronauts and Star Trek/Star Wars, one basketball set and one card for another. And after all that, there are still a few things in binders, etc. that I don't have documented! Not to mention the few things like the tobacco card dog sets and umpire sets I've seen online, but never in person that I've left for the future.... It boggles the mind.
June 5, 2015 at 9:28 AM

defgav said…
I'm pretty sure there isn't a complete set. I've never seen a stamped buyback of any big $ card.. for example the Brett and Yount RCs don't show any buyback results in an eBay search (including completed auctions). And let's not forget Pete Rose.. I don't think Topps would let him sneak back into their sets like that. (although I see via eBay his 74 All-Star card shared with Bobby Murcer did have a buyback last year, so maybe I'm wrong on that.)
June 8, 2015 at 3:38 PM

Steve at 1975BaseballCards.com said…
I like your quest of putting together a 75 buyback set! I recently picked up 3 of those cards (one for each of the stamps).

I just wrote what I know about these. In case anyone's interested the post is here: http://1975baseballcards.com/?p=372