Blog bat around: I always get my man

Hey, the Blog Bat Around is back! It's only been four years since I wrote one of these things. I suppose if I actually did anything to jump-start this series on my own maybe four years wouldn't go by between episodes.

Anyway, this latest edition has been started by garveyceyrusselllopes. He discusses cards he used to own and wishes he still did, and wonders if others have similar regrets.

My first response to that was "I know how you feel, but, no, not really."

Then, I thought about it a little, and that's still the way I think. But it took some time to get there. Let me tell you a little story first before I explain why.

Perhaps you've heard, there has been a manhunt for two escaped murderers in the wilds of Adirondack Park. 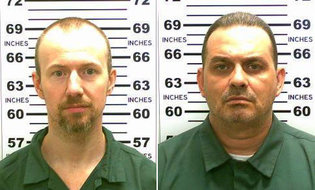 Yesterday, police found, shot and killed one of the escapees, Richard Matt, the man on the right. The other man, David Sweat, is still on the run as of this writing. But I know they'll get him, too.

For most of you, you've probably never heard of the areas that have been discussed in the news stories covering these events: Dannemora, Lake Titus, Owl's Head, Malone, etc. But these places are between 2 and 3 hours from me. I've been to Malone many times, covered sports events there and even had my car towed there once a long time ago.

Considering that there is nothing but small towns, a few small colleges, farmland and desertion between me and Malone, I might as well live right next to the site of the cabin where the escapee was hiding, and believe me, the news media around here has flipped right out. Our paper has people on the ground and are fielding calls from the BBC and other far-off places.

Until yesterday, some people were questioning whether these guys would ever get caught, whether police were using the right tactics, blah, blah, blah, the usual nonsense that people talk about when they want to talk and say nothing. But I'm confident. Because in collecting, when a card escapes me that I really still want, I will not stop until I find it again.

Most of this concerns cards that disappeared when I was collecting as a child. That's when I didn't know what I was doing, hadn't formed allegiances yet, and just cast aside cards depending on my whims or who was badgering me. 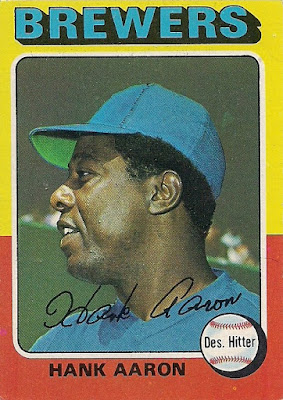 I've mentioned this card several times under the topic of "cards that got away." I pulled the 1975 Topps Hank Aaron card out of a pack that I had shoplifted from a drug store that year. Badgered by a friend who was more aware of who Aaron was and by the relentless guilt of my ill-gotten cards, I traded it to him for a 1975 Ron Cey card.

I regretted the trade not too long afterward and the feeling remained for years.

But I got my man. When I was trying to complete the first set I collected as a child, I acquired the '75 Aaron, for really not much money as I recall, and it was in my collection again. 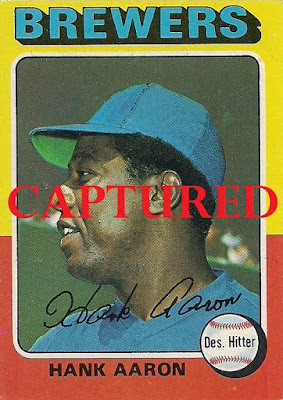 The most painful memory of that first year of collecting cards had to do with the priciest and probably most famous card in the entire set. 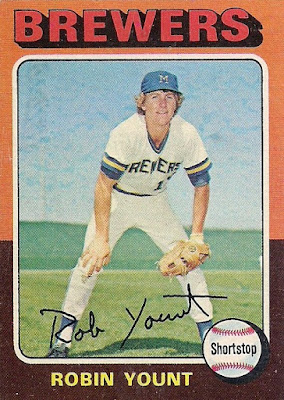 It's difficult to remember exactly, but I know that the Robin Yount rookie card was one the first 50 or so cards that I ever pulled out of packs that I purchased. It's quite possible that it arrived in the first three packs I ever bought.

But it was no matter to me, at the age of 9 anyway. Somehow it escaped my clutches. I must have traded it away. I don't think it was to anybody who knew what a big deal Yount was. We were all still kids and news didn't travel the way it does now. We were pretty clueless about this player except for the .250 batting average on the back of his card.

It didn't take long once I got really serious about collecting to beat myself over the head several times a month with the knowledge that I once owned a Yount rookie card and TRADED IT AWAY. Then, when I was trying to complete the set years later, that knowledge haunted me everyday.

But I eventually did get my man. It was one of the last cards I needed to complete the set. And I set aside a day to actually purchase the card, waiting until I had accumulated the money. Then I marched into that coins, stamps, cards and collectibles store and plunked down my money and walked out with a Yount rookie. 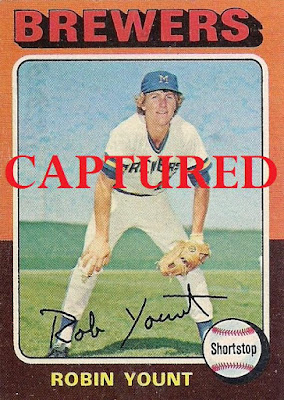 That's mostly the way it's been. The only cards that I no longer owned that really bothered me were cards from my childhood, when my decision-making wasn't the best. 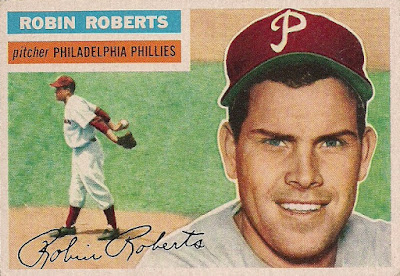 Last year, at a card show, I came across the card and threw some money at it to make the demons go away. 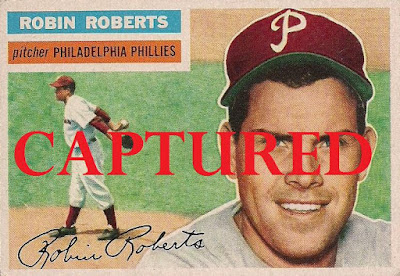 But that's where the regret ends. For the most part, I don't regret trades I make as an adult collector. The cards I send to people or trade to people I want to send to them. The moment they leave my possession, they're not mine anymore and really I don't think about them anymore either.

I don't wish I hadn't done that or run right out to buy the card again. I simply didn't think it needed to be in my collection anymore. Better to have someone else own it.

Maybe that's my rationalization for dealing with the loss of a card, but I don't think it is.

I can only think of a couple of types of cards that I traded since the start of this blog that I wished I didn't. 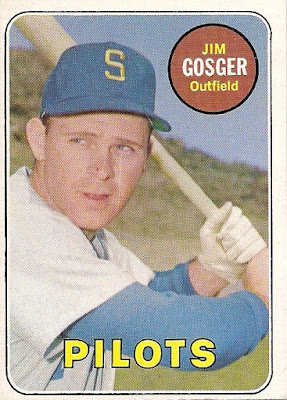 I've dealt a few 1969 cards to a few different people in the early years of the blog, and I really shouldn't have done that. All of those cards are from the first vintage cards I ever owned, acquired in a trade with a friend of mine.

It felt wonderful to own those super-old cards (which, by the way, were probably only 10 years old at the time of the trade), and that's not something I should have traded away.

Since then, I've re-acquired just about all of those cards, through trades or gifts or a card show or two. But there was no hurry in picking them up again. I knew they'd come back to me eventually. 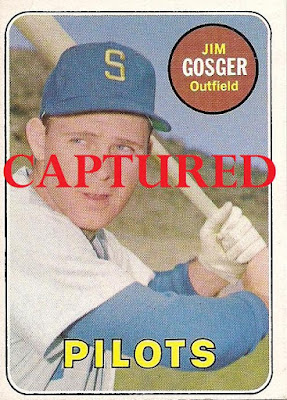 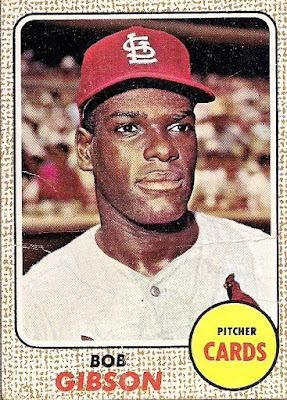 I also traded this card away in a blog deal years ago. I didn't really want to part with it, but at the same time I couldn't see the point of hanging onto it. It had stayed in my collection because it was a 1968 card of a superstar and it was in immaculate shape -- fresh out of a pack. That was so rare in my collection.

But I sent it off with only a tinge of remorse, and then it was forgotten.

Years later, and last summer, I was at a card show, going through a bunch of mangled and scrawled-upon cards. This Gibson card -- not immaculate anymore, but still looking wonderful -- appeared in front of me. Not far after that, was a 1968 Topps Denny McLain card.

I took that as a sign. They're both mine now. 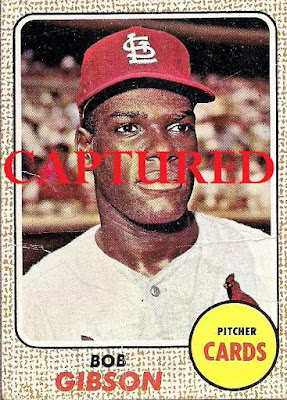 So by letting the Gibson free originally, I got the Gibson back and the McLain, too.

There is something mystical, spiritual and wonderful in that. Somehow, if it's a card you really wanted, it just might come back to you.

And these kinds of transactions and discoveries give me confidence -- not regret.

Because I always get my man.

Johnnys Trading Spot said…
I have regrets sort of, but only 1 card in a trade, the rest (13) I sold and I can live with that, they might come back to me....one day. All Mantles. The 52 Bowman was the one card I traded that I had more of remorse afterwards. I was excited at the time. I got a 3K count box of of 50s, 60s, and 70s in gd-ex condition including a handful of stars. I don't regret the trade, was again very happy at the time. I just have major doubts of ever getting the 52 back. But, hey thinking positively it might too!
June 27, 2015 at 10:07 PM

Billy Kingsley said…
I actually have family members taking part in the manhunt. Even been shown on the major news station...CNN I think, but the closest thing to a news station I watch is SportsCenter.

For me, I have only one card I traded away, back in 1996, and it's haunted me ever since. I have never sold a card since I began collecting in 1988, and I only trade duplicates, I did lose a few to thievery but I've since replaced them. Only one of them was rare but I happened to come across a better condition copy several years later- more than a decade ago now for that particular card.

By an odd coincidence the one I traded away and the one rare card stolen were from the same set, 1995-96 Upper Deck (NBA).

I really should just buy a replacement for the one I traded, it would cost me under $5. I just can't bring myself to do it for some reason. Collectors have odd mentalities sometimes, I suppose.
June 28, 2015 at 1:08 AM

Fuji said…
Great post. I had a little trouble thinking of a card, because most of the stuff I've sold or traded that I later regretted have been repurchased since I reentered the hobby. However... I dug deep into the memory banks and ventured to a trade I made in the late 80s to find my Blog Bat Around entry.
June 28, 2015 at 11:25 AM

GCA said…
My friend likes to tell the story that I traded him my '75 George Brett for the last '79 football card I needed for the set. Some Jets guy that didn't play very long. Got another one several years later when I was completing the set.
June 29, 2015 at 8:50 AM