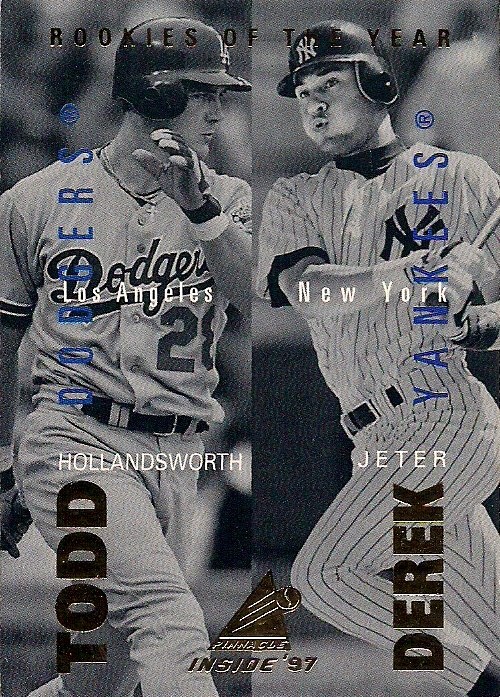 If you don't live in New York State perhaps you missed it. Derek Jeter hit a game-winning single in his ... oh, who am I kidding, you all get ESPN, right?

Suffice it to say, I think people overreacted juuuuust a little last night. But I don't have anything negative to say about Jeter. Hall of Fame player. Charmed career. Too bad he had to play for THAT team.

Unlike billions of collectors, Jeter doesn't fit into my collecting priorities much. In fact, the card above is the only way he gets in any of the Dodgers binders. All other necessary Jeters are related to sets I've collected.

But that other guy who is retiring in a matter of days, that first baseman for the White Sox  -- the one who is a little more of my kind of player -- can be found in my binders everywhere. 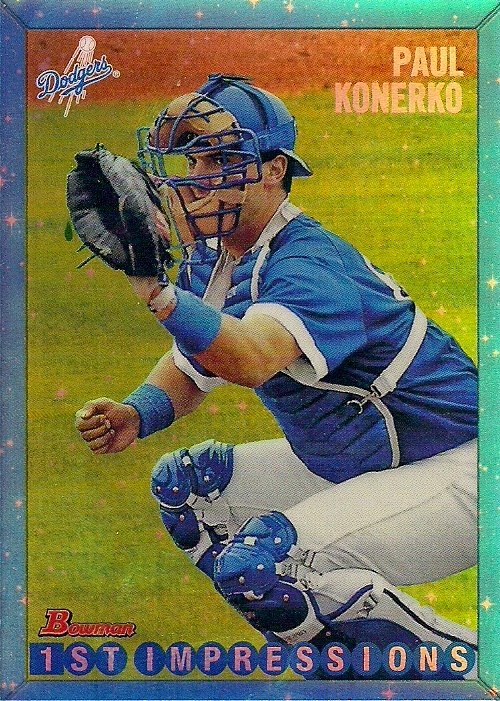 It's Paul Konerko Day in Chicago on Saturday. I hear they're going to run some sort of video, and then I hope Konerko goes out and blows up a light tower like Roy Hobbs and no one can ever stop talking about it.

If my records are correct, I have 104 cards of Konerko. Somewhere between 65-75 of them are of him with the Dodgers, the team that drafted him. He played only 55 games for the Dodgers in his career and I have a card for every game, plus probably the 26 games he played for the Reds after he was traded to them by L.A.

A big part of why I have an attachment to Konerko is because of what could have been. If the Dodgers never traded him, they probably could have enjoyed stability at first base for years. No signing of an over-the-hill Fred McGriff. No position experiments with Shawn Green and Nomar Garciaparra. No desperate expectations with Hee-Seop Choi. No waiting seven years for James Loney to realize his potential. No giving prospect-lovers heartburn with an epic trade with Boston. So much effort that could have been conserved.

What gives me consolation is, yes, all of those Konerko Dodgers cards. They are proof that the 400-homer-hitting slugger began with my team. And to salute him on his final weekend now, here are the Dodgers cards of his that I could scrape up: 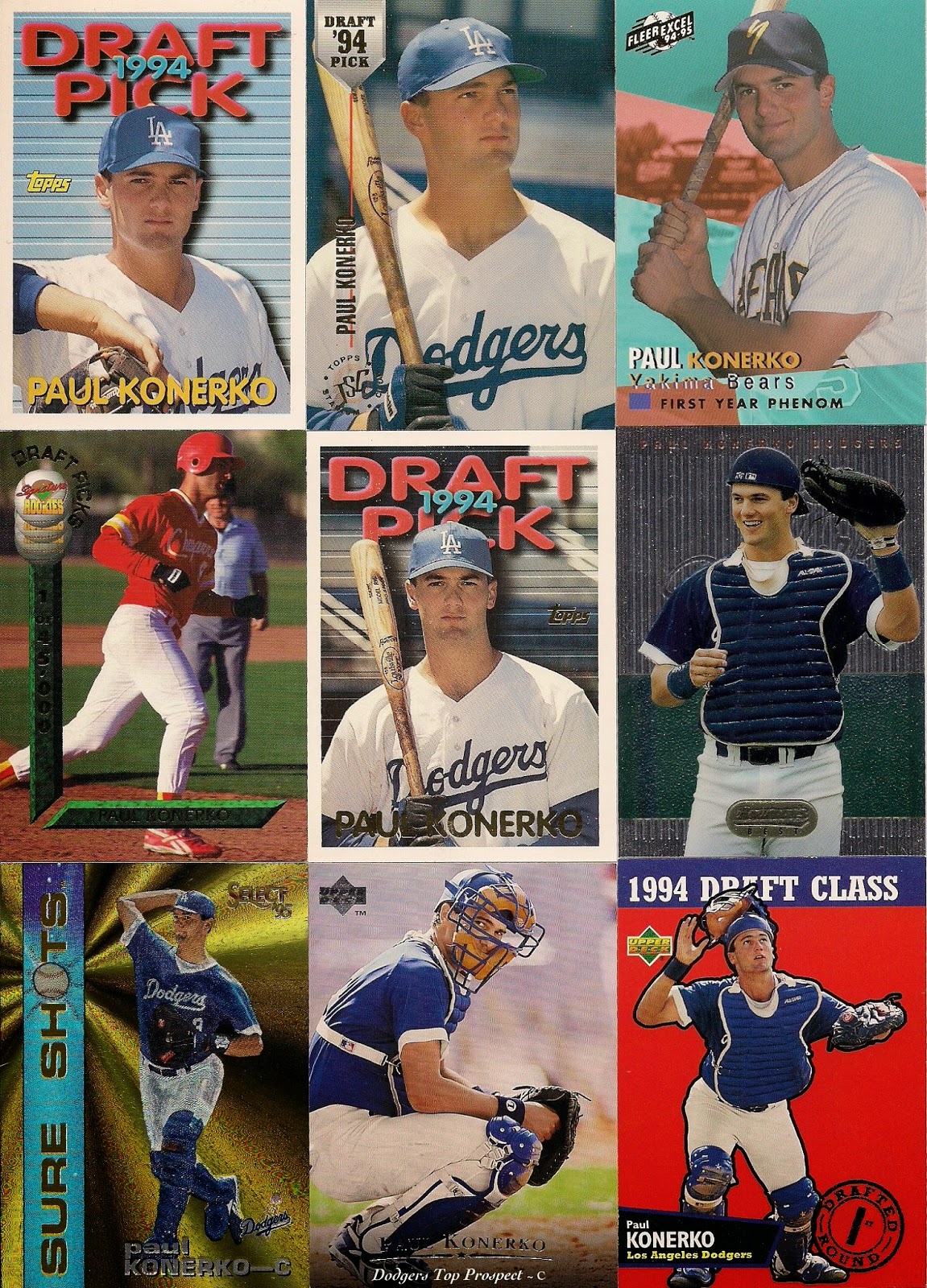 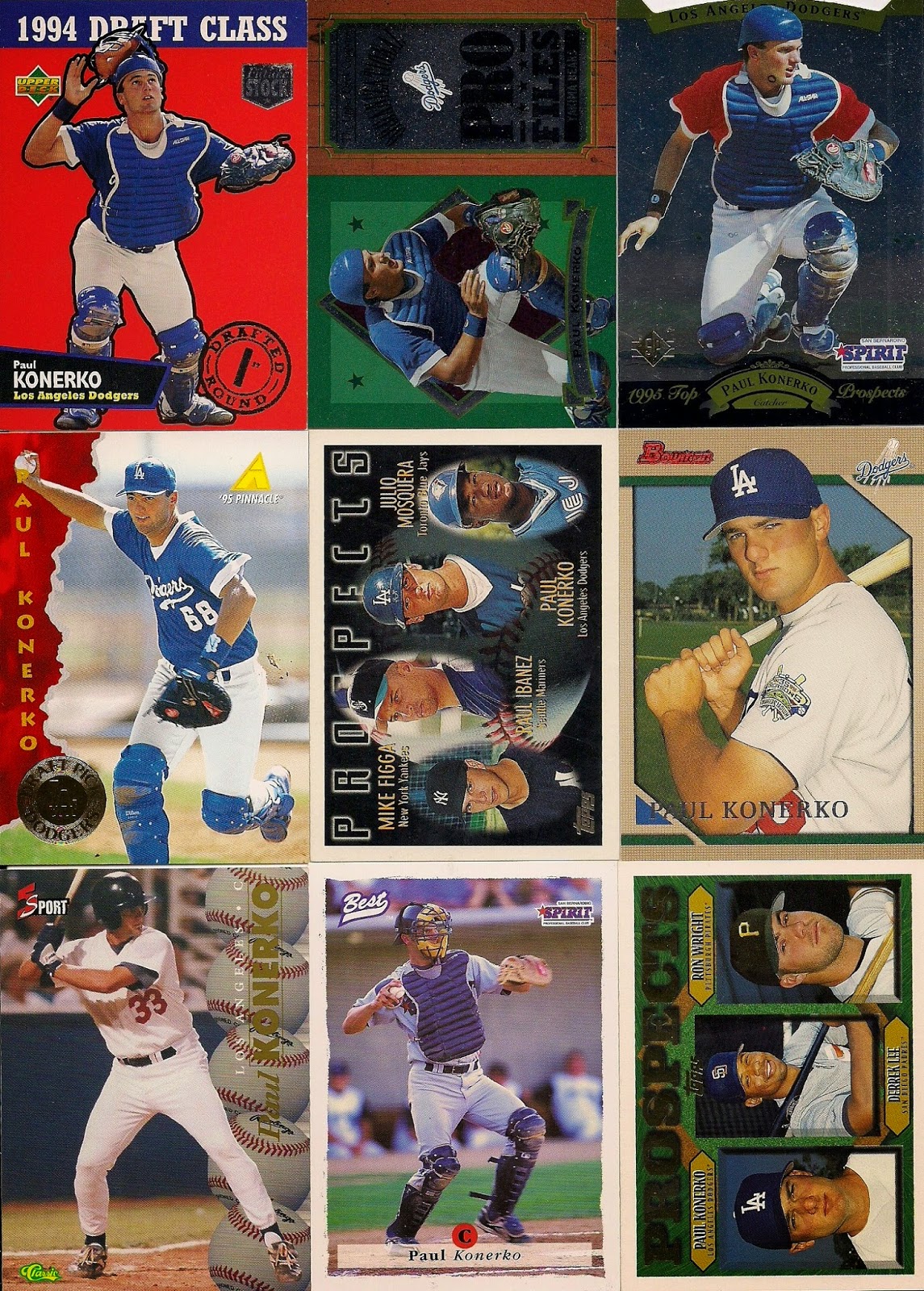 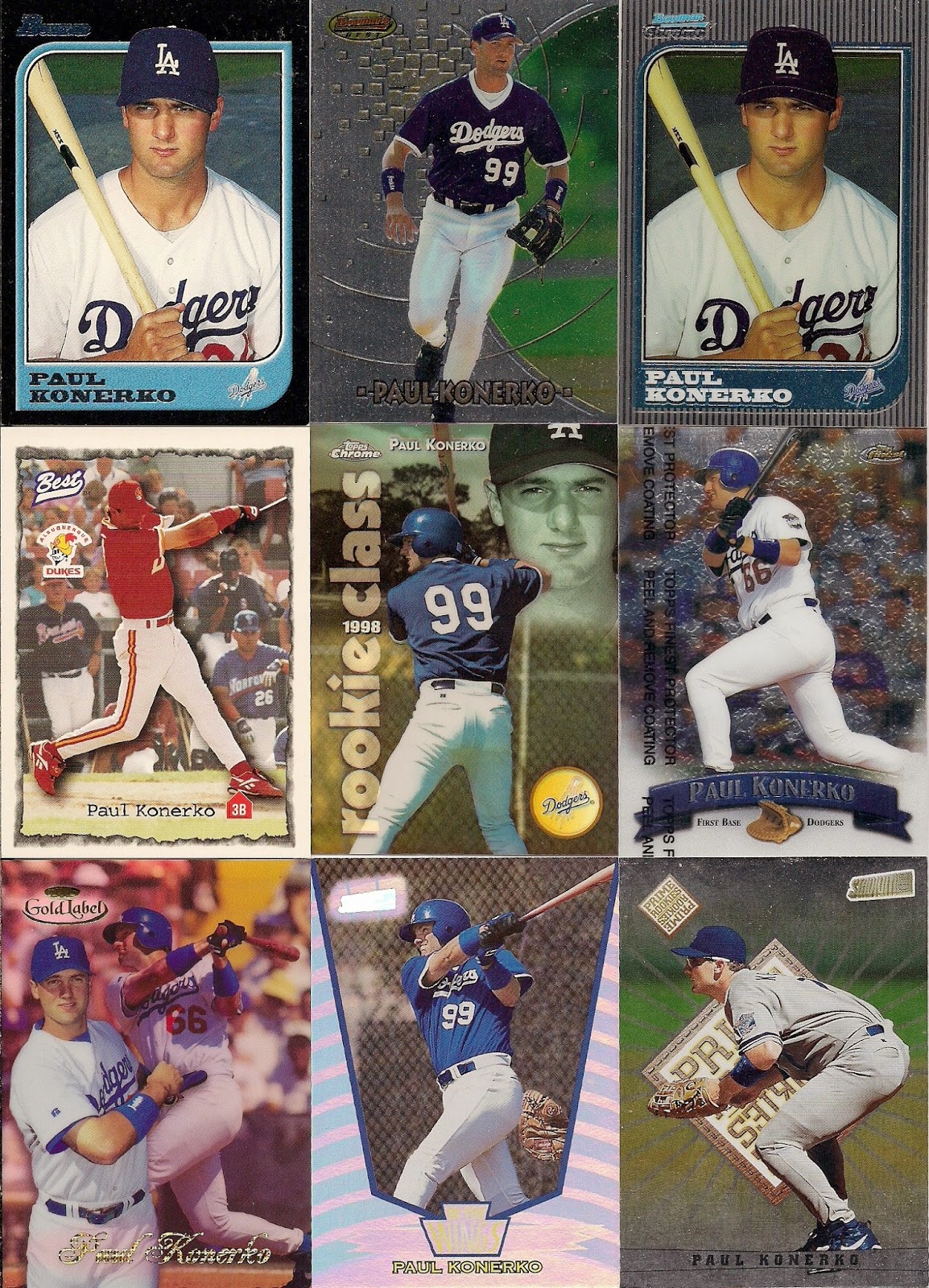 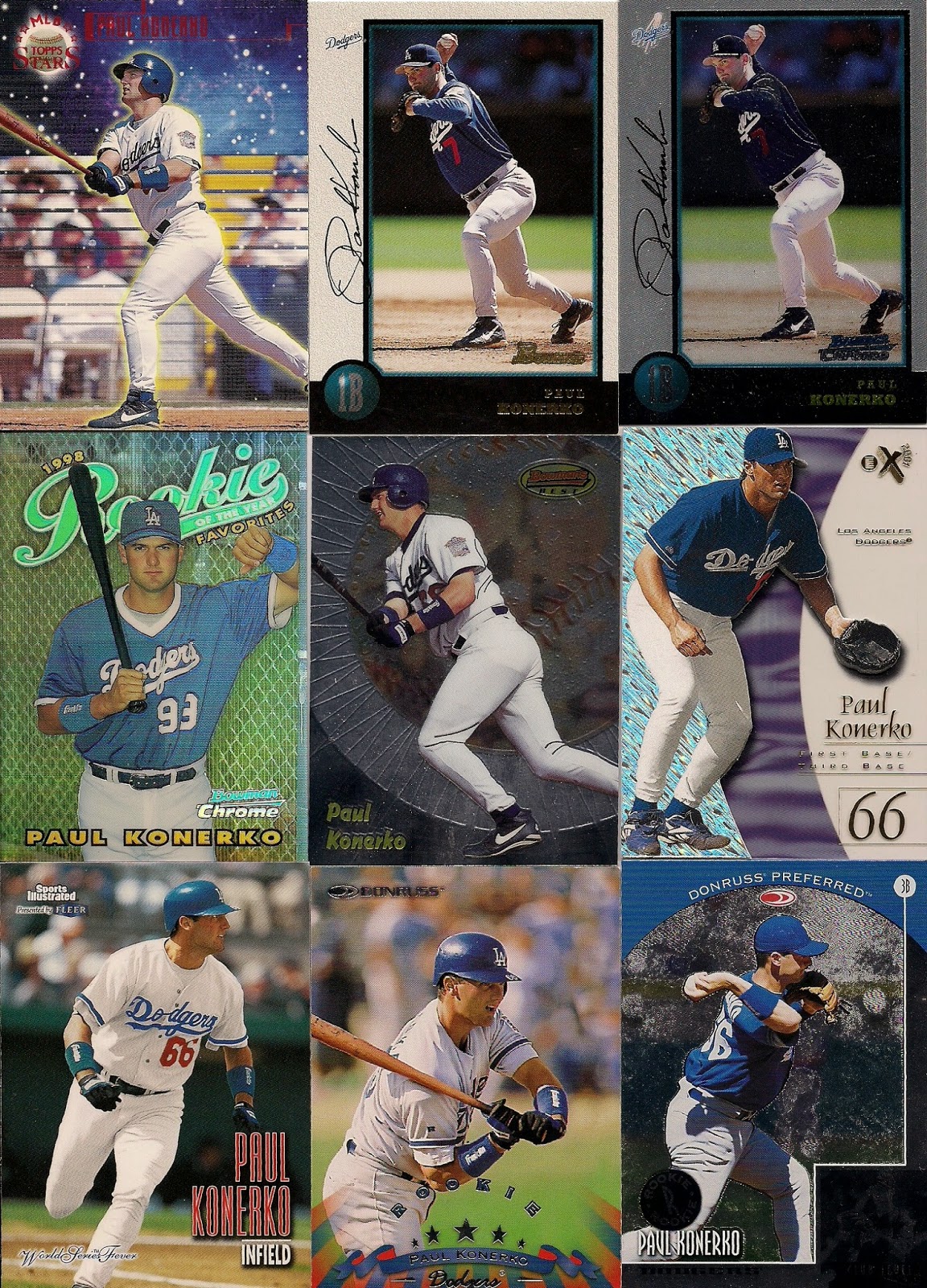 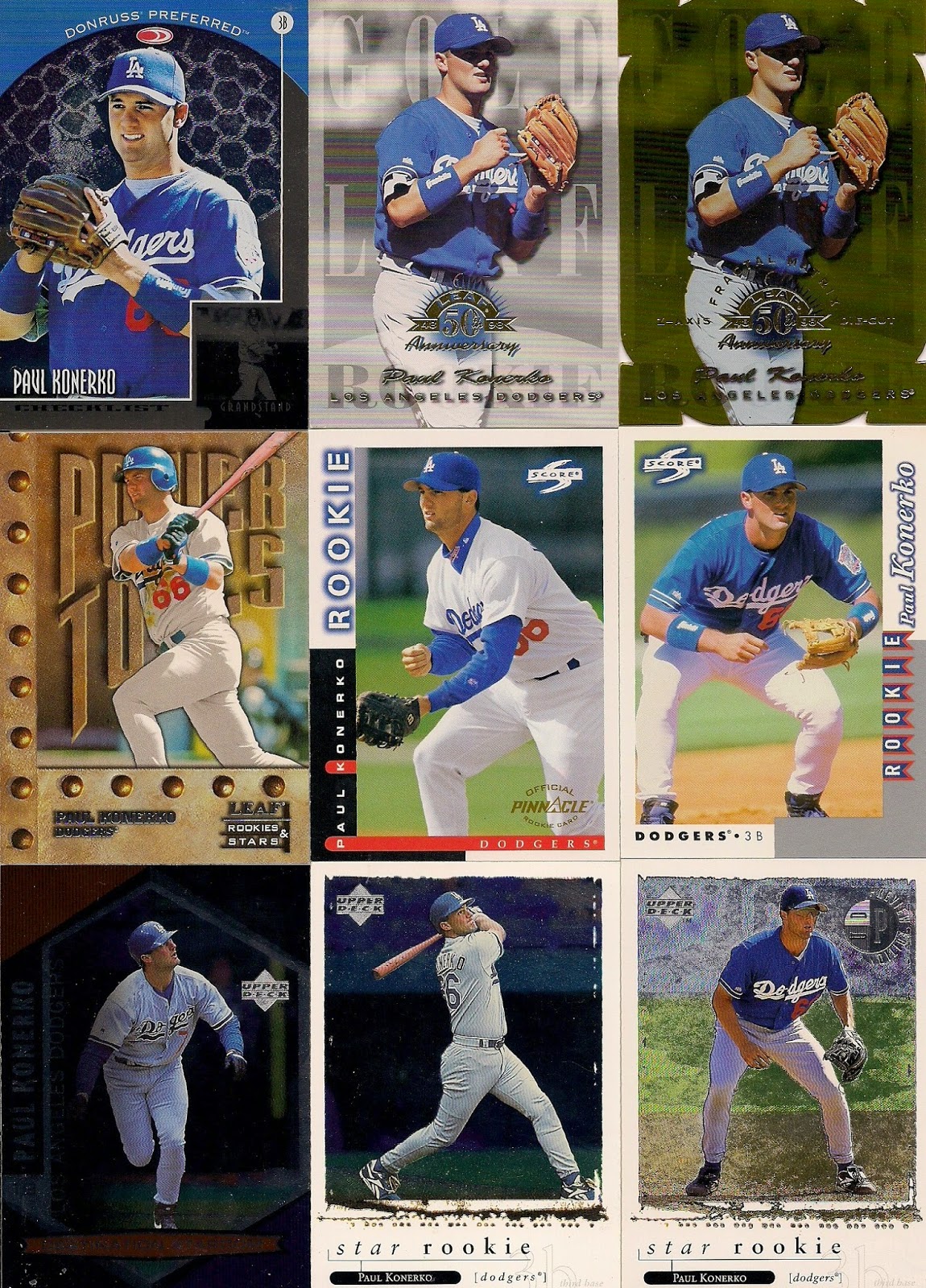 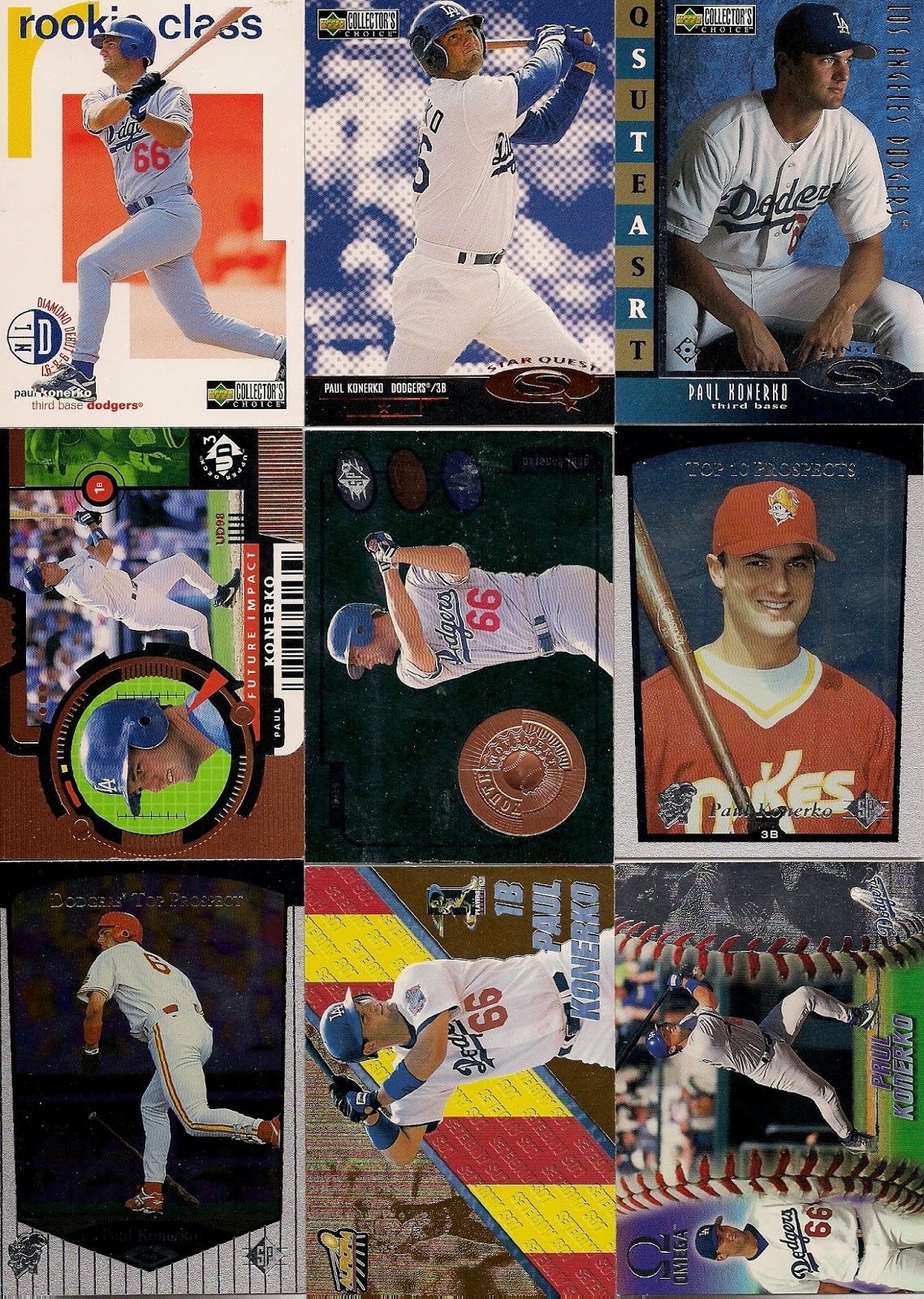 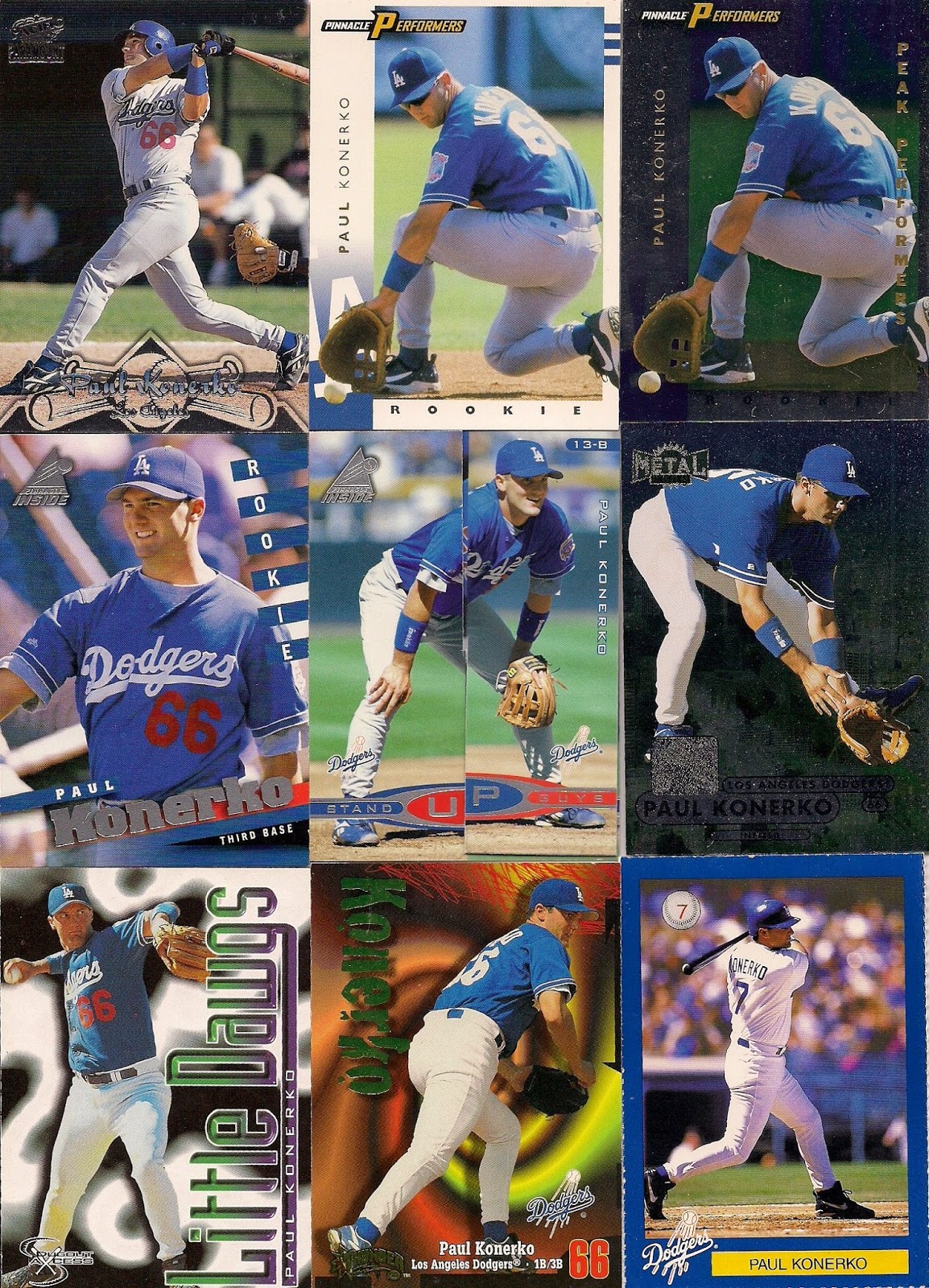 A lot of cards with the word "ROOKIE" plastered all over them.

I didn't track down all of the Dodger Konerkos I have, mostly in the interest of time and sanity, since I have to put all these back in the exact order in which I removed them.

But you do get the idea that I have a decent reminder of Konerko's days as a Dodger. 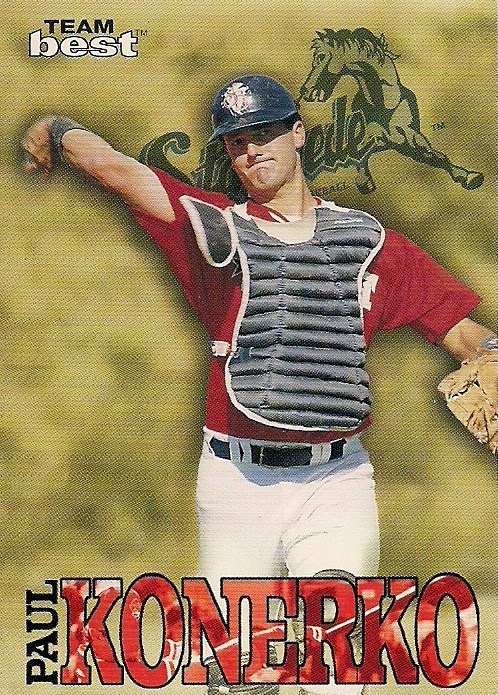 And to you White Sox fans who look at these and say "THAT isn't Konerko," you know what? 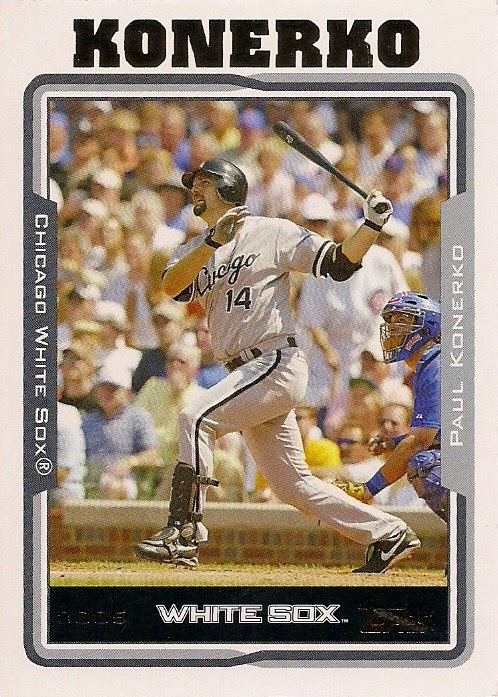 Blasting the light tower in his final at-bat to win the game.

The Angels In Order said…
Yikes! Did you take the time to perfectly align all those 9-card pics on your scanner? Oh, great Konerko collection too.
September 26, 2014 at 9:11 PM

JediJeff said…
Just send me all your Konerko cards and give them a rightful home.
September 26, 2014 at 9:47 PM

steelehere said…
Paul Konerko will always remind me of Tommy Lasorda's horrible job as a general manager for the Dodgers. He traded Paul Konerko and Dennys Reyes for reliever Jeff Shaw in a desperate attempt to save his job because Fox just took over ownership of the Dodgers. Even worse, Jeff Shaw was a free agent after the 1998 season and Lasorda assumed that he was getting a 1st round draft pick as compensation if Shaw signed with another team.. Unfortunately, he didn't know MLB's rules at the time which didn't allow draft pick compensation for players traded mid-season who didn't resign with the new team.
September 27, 2014 at 12:59 AM

Bo said…
One of the sets there was a ton of card from in the boxes I gor last week was 94 Stadium Club draft, and I'm pretty sure there were multiple Konerkos in there. Let me know if you need that one.
September 27, 2014 at 3:59 PM

Fuji said…
The 94 Stadium Club draft card was the first card that popped into my head when I thought Konerko & Dodgers.
September 28, 2014 at 11:58 PM