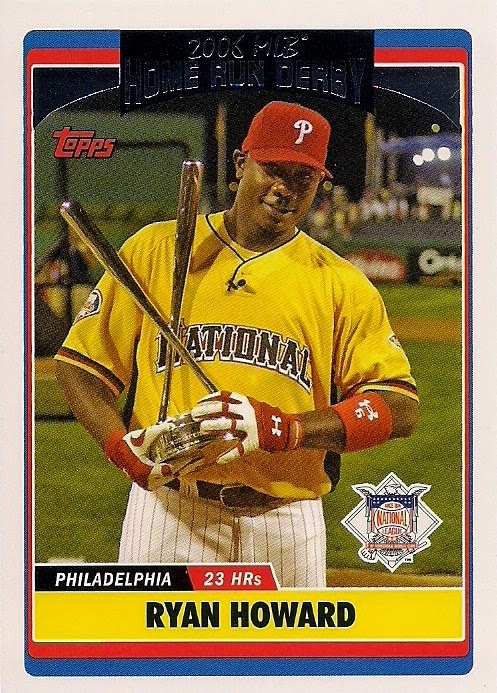 A couple of people have weighed in on the recent Topps announcement that it is extending the 2015 base set by 20 cards per series. Instead of 330 cards, as has been the case since 2006, I believe, Series 1 and Series 2 will be 350 cards.

Of course, there is a lot of speculation about what Topps will do with those extra 20 cards. I don't really care what Topps does with them because I don't collect the base set anymore. If Topps surprises me and produces a 20-card "turn back the clock" subset, then you will hear some giddy noises from me. But throwing in 20 extra relief pitchers isn't going to bring back Topps Total. And expanding so there can be a fourth card of Mike Trout or a 20-card Derek Jeter tribute is merely what everyone expects.

Where my "concern" -- and I use that word lightly -- lies is in what Topps does with the Update set. Will that set, which also has been 330 cards the last few years, be 350 cards, too? Because that thing is already bloated at least 100 cards beyond what it should be.

Update is Topps' version of a fast food buffet. Yes, you can have as many cards as you like. Multiple helpings of cards. Go ahead! Gorge yourself! But you don't really need them. They serve no purpose beyond the 230 calories ... er, cards .. that really need to be there.

Since Topps can't fill the Update set without filler now, what is it going to do with the set with 20 extra cards?

In recent years I have been relieved to see that the lame combo cards disappeared out of Update. Now my quest is to get rid of the useless Home Run Derby cards.

The Home Run Derby should represented by one card. See that Ryan Howard card from 2006 Update? That's the only mention of the 2006 HR Derby necessary. Put a nice little write-up on the derby on the back with the results -- doing it in tabular or graphic form would be more interesting than a simple paragraph, by the way -- and you're done. With one card.

Instead of doing this: 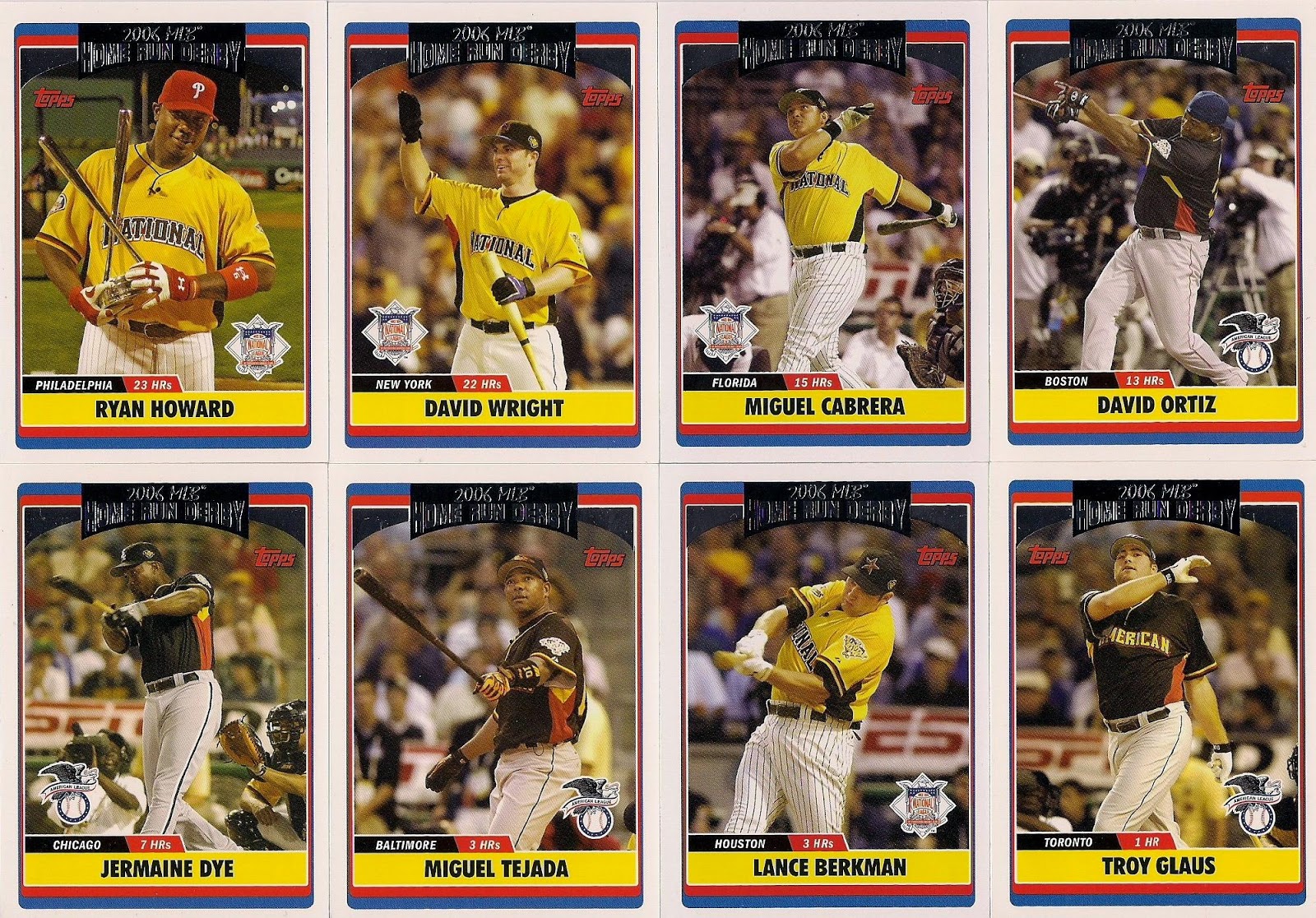 What a waste of good artificial cardboard.

I believe every participant is represented there. Normally, I applaud being thorough, but not only is this pointless and overblown, but it's really, ugly. Only a lover of '91 Fleer could enjoy these cards.

Once I returned to collecting, I attempted to complete Update only in 2006. After I saw what was involved, I bought less and less of it in ensuing years.

I don't know if the set represents the HR Derby as thoroughly as it did in '06, but I know that there are still too many cards devoted to it. I still buy some Update packs because I like to see people in new uniforms -- shocking view of Update, I know -- and too many HR Derby cards fall out. 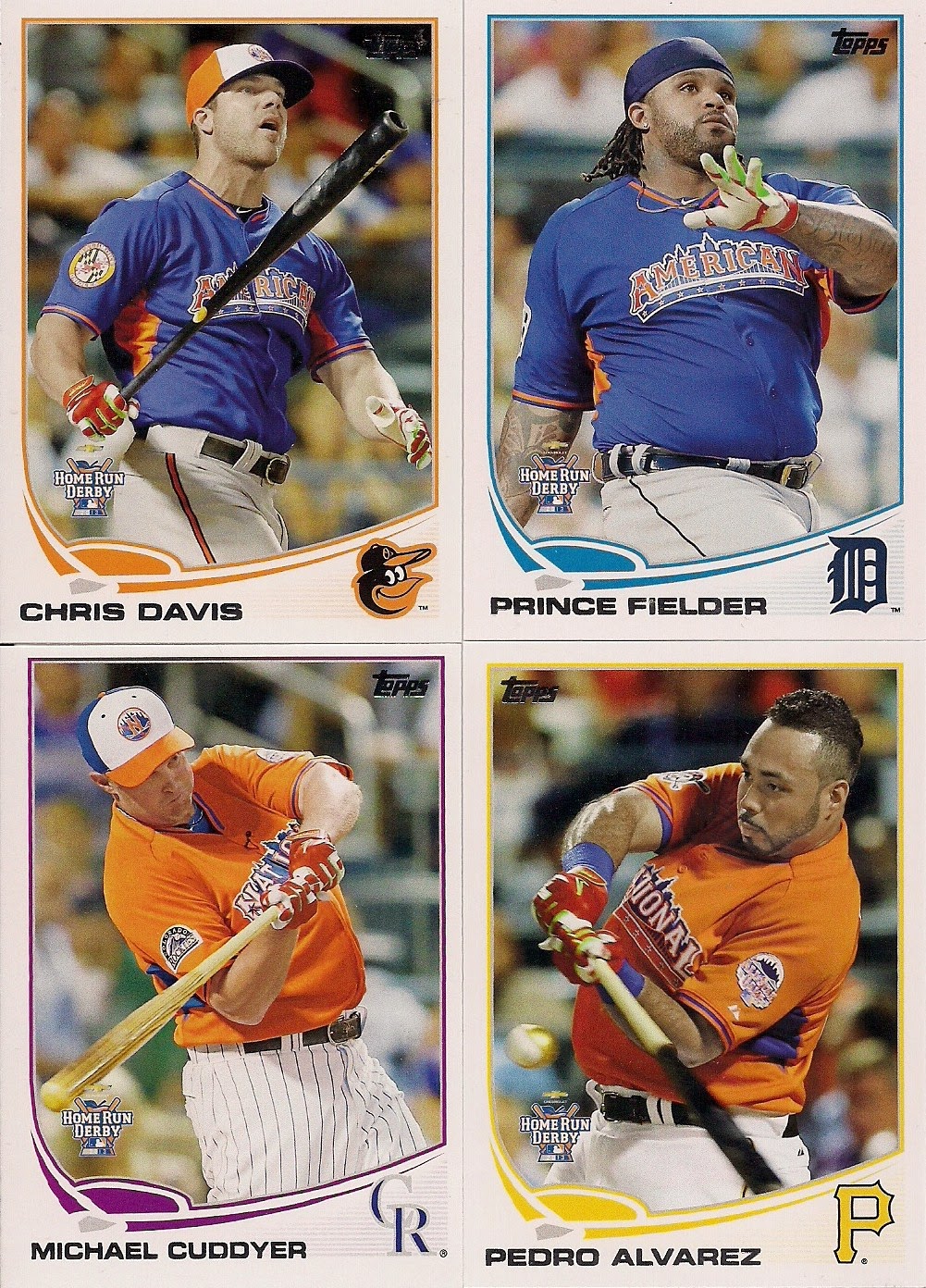 This is what I ended up with from last year's Update purchases. That's four cards too many because none of them won the HR Derby. Also, it's way too many opportunities to show people swinging a bat without wearing a cap, which should never be allowed. 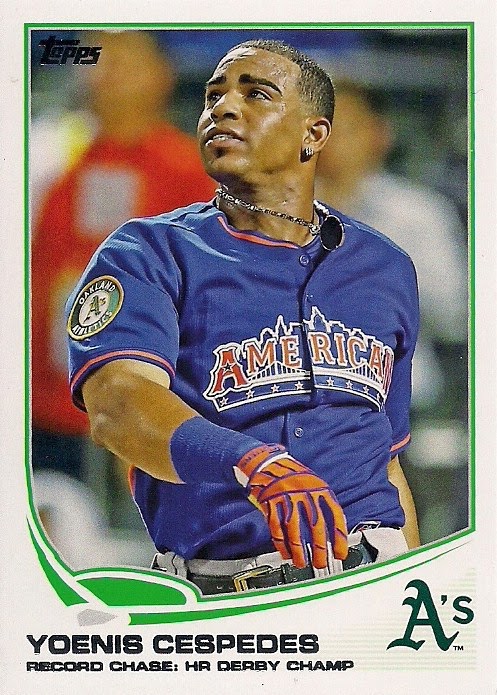 There's the guy that did win it, and that's not technically a HR Derby card, but a checklist card, because there's another card of Cespedes (in basically the same pose) that's his HR Derby card.

The Update set would be so much more succinct, so much more collectable, if there was just one card celebrating the HR Derby. A nice posed shot with the winner and the trophy, like ol' Ryan up there, would be just perfect. Remember the card of Kurt Bevacqua blowing the bubble? That was a meaningless tournament, too. And Topps confined it to a single card, now one of the most popular cards in the entire 1976 set.

I can only imagine how useless that card would be today if there was a card for every player that competed in that bubble gum blowing contest. Yeah, I know that sounds cool right now, but trust me, it'd get lame very quickly.

So, that's my "concern" with expanding the set -- that is, if Topps is going to do that with Update, too.

But I won't be trying to complete it, so, you know, don't listen to me.

Night Card Binder candidate: Ryan Howard, 2006 Topps Updates and Highlights, #UH283
Does it make the binder?: It does (and I shudder to think how many HR Derby cards are already in the binder).

Ana Lu said…
When Topps lose the 'exclusive' tag we see what they come up with. They have to change something. They are getting too much into routine and do nothing out-of-the-box.
September 8, 2014 at 4:30 AM