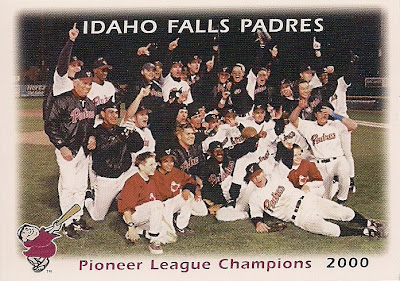 The Dodgers can't beat anyone right now. I have no answer for why that it is. But you can blame it on whatever you like, injuries, misfortune, lack of depth, declining skills, strategical decisions, not enough scrappy, even the lame "no chemistry" argument.

In more pleasant times, I would be too proud to show a card like this. Normally, I consider the Padres half the organization that the Dodgers are. But sitting in last place, there is nothing derisive that I can say about any team without receiving a comeback that I can't answer.

So, here is a minor league issue of a card commemorating the Idaho Falls Padres' Pioneer League championship in 2000. I believe it happened in their first year of existence. It's somewhat fitting that Idaho Falls swept the Great Falls Dodgers in two games to win the championship. All-in-all, it's a miserable card during a miserable time for my team.

I received this card from Bo of Baseball Cards Come to Life! You'll see some more pleasant cards from him later.

He also sent these three cards for my 1979 Topps completion quest:

The year 1979 happens to be the first year that I was thoroughly disappointed in the Dodgers.

Oh sure, they lost the World Series in each of my first two years of watching baseball in 1977 and 1978. But making the Series isn't anything to look back on with embarrassment.

The 1979 Dodgers were essentially the same team that they were in 1977 and 1978. Tommy John was gone, but rookie Rick Sutcliffe matched him in numbers that year.

I kept waiting for the Dodgers to return to their normal pennant-winning selves month after month after month. But they never did. Injuries to Reggie Smith and Doug Rau apparently were too much to overcome and they finished a very unexpected fourth.

1979 was my first indication that expectations are worthless in baseball. Experts can write all they want about how they're the experts, but we're the fools for paying attention to them.

Which is why I'm not giving up on this year's Dodgers either, despite what many are saying about the season being finished.

If I want to keep watching baseball games in 2013, I need it.

Night Card Binder candidate: Idaho Falls Padres, 2000 Grandstand
Does it make the binder?: No. There's no card number on the thing. Plus, there's the whole business of Padres celebrating.

BASEBALL DAD said…
Everyone thinks I'm crazy, but I always have faith in the Tribe and expect a pennant, until they are mathematically done. And then I still watch !

BaseSetCalling said…
The Tribe just had a great weekend. Francona is one smart cookie.