The best Dodger cards ever made countdown: 100-91 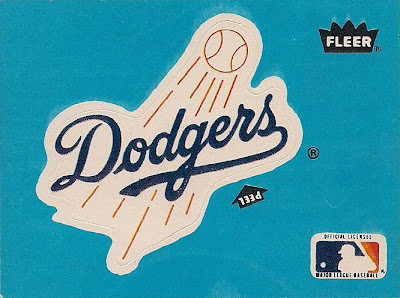 Well, you might be as disturbed as that random collector, but I am here to serve you. This is the beginning of The Best Dodger Cards Ever Made Countdown.

A few words before the countdown begins. As mentioned before, I am including only Dodger cards in my collection. Why would I count down cards I don't have? Cards I don't have are automatically less great.

Also, my criteria for making the countdown isn't very strict, but there are reasons why I chose certain cards. Card image is important. Card set is somewhat important. Perspective is important. For example, if the card is a player's rookie card, did the player go on to achieve something notable? Did the card seem unimportant at the time, but looking back, grow in importance?

A card that is unlike any other card is important, too. A card that commemorates a moment is also notable. What was going on at the time in baseball, with the team or with the player? That plays a part in the greatness of a card, too.

Mojo factor is not important. A card can have seven signatures on it, but it probably looks like crap. So unless I find something uniquely special about a "hit" card, it's not going on the countdown. A piece of cloth or a signature doesn't make the card great.

OK, so that actually is quite a few rules. But I didn't use charts or graphs or calculations on this. Much like the way Don Mattingly or Joe Girardi manages, I am going by "feel." I'm sorry if that makes you groan, but it's my countdown, my blog, my cards, my free time. I do what I want.

Also, I reserve the right to change the countdown at any time. I will be acquiring great Dodger cards in the future, I'm sure, and if that acquisition belongs on the countdown, I will be updating it with an update post.

Finally, I am breaking up these Dodger Countdown posts at 10 cards apiece. And I will be not be featuring the countdown consecutively -- meaning this won't be an entire week of countdown posts. I will be spacing them out much like my other regular features, basically so the whole thing doesn't bore me.

Yup, this thing is all about me. 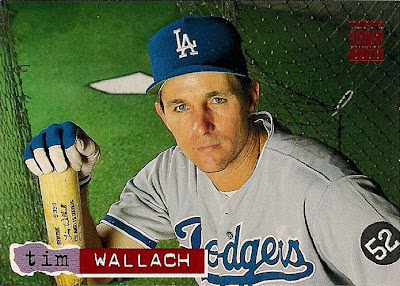 A card that has appeared on this blog a couple of times already, and was once featured in my blog header. This card is here solely for the intrigue of a photo taken in an underground batting practice facility. I am sure there are other cards like this, but this is the first one I saw and it's a terrific shot. The No. 52 patch memorializing departed pitcher Tim Crews adds a somber air to the photo. 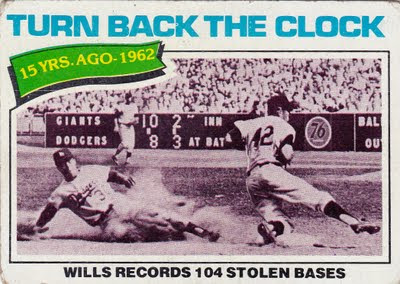 The first of several moment-in-time cards in the countdown and a sick scoreboard card. The card commemorates Wills' former season-stolen base record with the actual photo of Wills' 104th stolen base, achieved against the Giants. Great action. Great stuff. 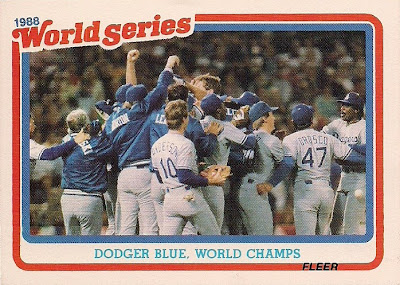 I'll get it out of the way right now. This is a crappy photo. I count the back of eight heads. ("Everybody wanna be in the picture? Get up and go to the other side of the table!") But the problem is that Topps shafted the Dodgers after almost every World Series win. No World Series subset in 1966 Topps (for the first time in seven years!!!). None in 1982 Topps. None in 1989 Topps. So this '89 Fleer offering is the first card to recognize a Dodger Series championship since the 1964 Topps set. I'll take what I can get. 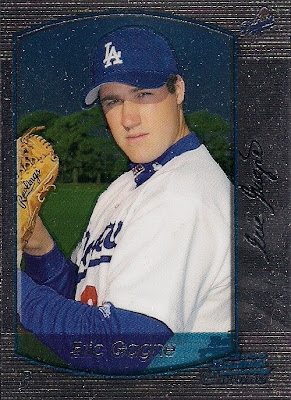 I believe Gagne's rookie card is the 1999 Fleer Tradition Update card (I don't follow rookie cards closely). It's a card I don't have. But somewhere along the line while I wasn't collecting cards, Bowman Chrome became THE rookie card to have. This is Gagne's first BoChro and that's good enough for me. Gagne gets a lot of flack for his confessed HGH use, as he should. But I still am not convinced it had anything to do with his amazing save streak and that's why this card is here. 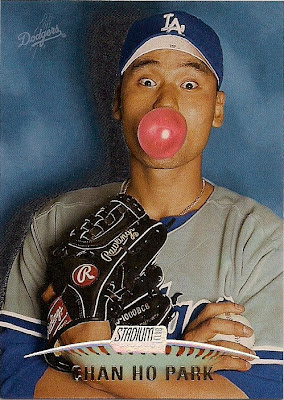 You know me. I love quirky. I love bubble gum. Who knew Chan Ho could be so wacky? He seemed so uptight when he was with the Dodgers. This card breaks all kinds of barriers and makes me smile every time I see it. It's the best Park card of many, many, many Park cards. 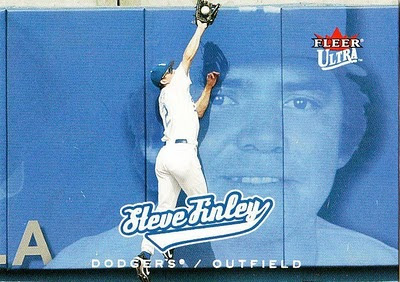 Let's not be coy. This card is here because of the giant picture of Fernando's head. But the juxtaposition of the Valenzuela wall photo with Finley's posed "fantastic catch" is both odd and tremendous at the same time. It's nothing ever seen before and that's good enough for the countdown. 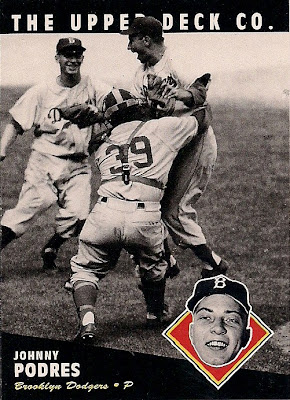 There are plenty of great Johnny Podres cards, some of which you'll see on the countdown. And everyone has seen the Brooklyn Bums celebrating their long-awaited 1955 World Series title in archival film footage over and over. But until this set, the Dodgers' celebration hadn't been captured on cardboard to my knowledge. How unfortunate. And how nice of Upper Deck to right a wrong ... and add a floating head to tie it all together. 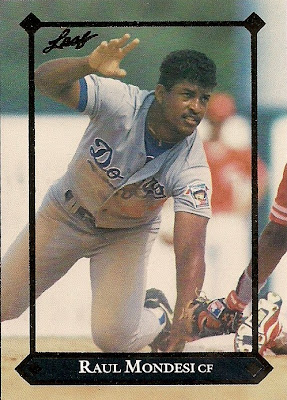 Mondesi's rookie cards, I believe, are his 1991 offerings. I have those cards. But I think this is the best of Mondesi's early cards because it captures the amazing promise that he offered at this time. Mondesi was the most naturally gifted baseball player to ever wear the Dodger uniform during my time as a Dodger fan. He could do it all -- a true five-tool player -- in the most exciting way possible. This card captures those expectations for me. 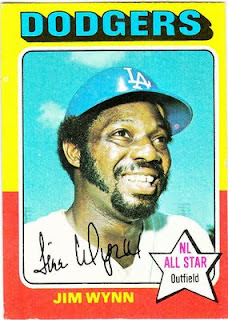 When your team makes a trade for a big-name player, it's a big day. As a collector, your mind goes immediately to that player's future first card in your team's uniform. The moment when you pull the card of that player is one of the greatest collecting moments ever. Unfortunately, I didn't get to pull this card of Wynn, an All-Star and Comeback Player of the Year in his first year with the Dodgers in 1974. But I coveted it for a long time, just because it was Wynn's First Card As A Dodger (Traded cards didn't count back then). Also, look at that crazy smile and them sideburns. 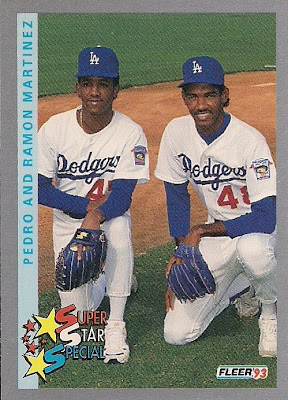 Long before Pedro Martinez became part of Red Sox Nation lore, he was known as Ramon's little brother. It was super-cool to have both of them on a baseball card together. Ramon was the ace of the Dodgers at the time, despite some injury woes. Pedro was an up-and-comer, though few envisioned the kind of amazing career that he would have. This is when SuperStar Specials worked especially well. Not that "random players posed together" nonsense. (Plus, the dual blue gloves is awesome).

The cards will get more exciting than this. But don't expect to be blown away. I'm just your random guy with a random collection.

Who likes the Dodgers and doing little countdown shows.

Nick said…
Glad that Mr. Wynn found his way into the Top 100, that's one of my personal favorite Dodger cards as well.

Spiegel83 said…
This is going to be a fun and epic set of posts. This countdown will also give me a checklist for my collection.

Commishbob said…
The Finley and Podres are my faves out of this run. Looking forward to the rest.
October 1, 2012 at 8:47 PM

runfore!kelloggs baseball cards said…
Nice work as usual. I loved the Fleer sticker. I thought that was going to be #100, even though it's not really a card.
October 1, 2012 at 9:24 PM

Zayden said…
Good stuff! I don't own any of the cards you've listed so far but I'm definitely going to keep an eye out on these posts to see how many I end up having in common.
October 1, 2012 at 9:58 PM

i believe that batting cage in card 100 is the netted cage downstairs behind the dugout. been down there once on a private 'tour'.
there's also a possibility that's the actual cage that Gibby hit off the 'T' before the moment the improbable met the impossible.
October 1, 2012 at 10:58 PM

shoeboxlegends said…
Great start, I like the Finley, Podres and Wills cards best. Really looking forward to the rest of the countdown!
October 2, 2012 at 9:31 AM

AdamE said…
Why waste time writing on my own blog when I can comment on yours...

100. My brain can't process his hat right away. At first glance it looks like it is on sideways because of the plate behind him.

98. When I go to a ballgame and take pictures 90% of them are of the players back or at least a partial back shot. I figure in 40 years, when I am looking at my pictures from a game I went to, I'm not going to remember what half the guys on the team’s faces look like but I will be able to read the names on the jerseys. So in 40 years I can look at pictures with my son and I don't have to say, "Look when you were one you saw Pokey Reese play in Kansas City it is right here in a picture." "Who is Pokey Reese you say?" "Well he was a guy that played for the Sox when they won their first World Series in a long time." "All those other guys got a ring that year too but damn if I can remember who they are." "Both the one with the dreadlocks and that kind of fat left-handed batter look familiar but I can't seem to remember their names." "Man I wish I could at least see what number they are."
97. Most will think this is utter blasphemy but I don’t care who used steroids. In 98 did everything they could to hit the most home runs; Griffey didn't he got 3rd.

96. So much better than the last Park card. Give me gum shots over junk shots any day!

95. Sometimes my favorite color is red. Sometimes it is red. Right now it is blue so that is a good looking card.

93. When I see this card I don't see "amazing promise", I see a grown man sporting a little kids 80s bowl.

92. Wynn is much too happy looking for his facial hair.