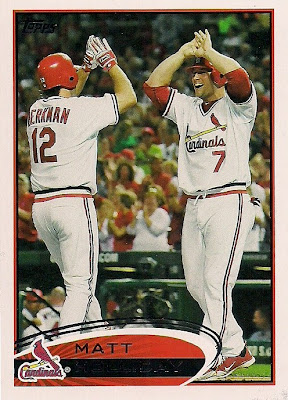 As the perfect capper to it at all, there is a good chance that I will be spending the end of a crap-filled weekend by writing a happy newspaper headline declaring another championship for my least favorite team on this planet. It could be the second time out of three years that I have done this and it doesn't get any easier.

My hope is that the Tigers will somehow find a way to win the next two games and then it will be someone else's job to write the final headline. But I don't expect that to happen given the Giants' voodoo all regular season and postseason -- balls bouncing off of third base, bunts suddenly stopping dead in their tracks. This is why I called the Giants as Series winners at the start of the postseason. You don't pick up Ryan Vogelsong off the scrap heap and he magically transforms into a guaranteed winner without raising an eyebrow. Destined? Yeah, in the most irksome way possible.

It makes me long for 2011 and the Cardinals, the only team to break up the Giants' run over the last three years. I know very few people like the Cardinals outside of St. Louis, but they sure look pretty good to me when I have to stare at all that orange.

By the way, remember around 2009 or so, when everyone was declaring the American League's dominance and that the National League was a pathetic, inferior league with the implication that this is how it would be for quite awhile? If the Giants win, the NL will have won three straight World Series, 4 of the last 5, 5 of the last 7, and the past three All-Star Games. For what it's worth.

That's my silver lining if the Giants win.

But I would have much rather have it be the Cardinals. Anybody else really.

Baseball is just another ugly adult matter these days.

Bring on the offseason. 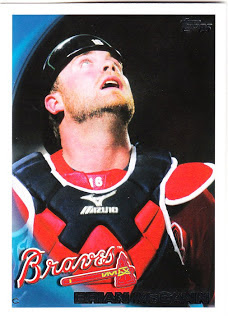 Just different enough to hang on to its spot.

Eric Bracke said…
As a Cardinals fan, I love the Matt Holliday card in the old throw back polyester uniform. I think the card is made even better by the presence of Lance Berkman. I also understand your pain on the Giants. They are annoying to watch.
October 28, 2012 at 4:48 PM

steelehere said…
I could really use the next installment of the greatest Dodger cards. What I just saw on Fox tonight is making my stomach sick!
October 28, 2012 at 11:55 PM

madding said…
This is my favorite non-subset card of the Topps flagship set this year. I guess it's because of the throwback stripes. The Cards almost never wear throwbacks, so I get excited when I see them on cards. The Edward Mujica card from Update this year is great for that reason, too.

I was quite frankly surprised to see "awesome" and the Cardinals used in the same post.

Personally, I am just bummed that baseball is over for the year. I didn't watch a ton of the World Series this year, but I still didn't want it to be over even though I don't really care for the Giants or the Tigers.
October 29, 2012 at 3:08 AM