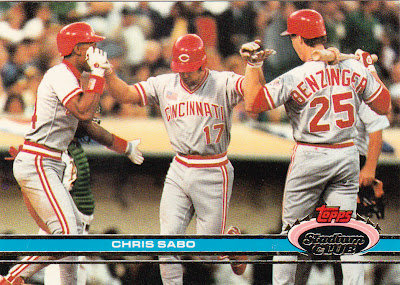 If baseball cards didn't have nostalgia, they would be nothing. Collections would be a lot smaller. Collectors would throw their cards away at the end of the year. Dealers would go broke.

I have boxes and boxes of cards that exist because I like to pull them out once in awhile and see what I miss about whatever is portrayed in the card.

So, this is what I miss from the photo in this card:

1. Spuds
2. Skinny ballplayers
3. Elastic waistbands (I have no idea why)
4. A world in which the Reds and A's can play in a World Series
5. Stadium Club
6. Reds uniforms without black in them
7. A's uniforms without black in them
8. Eric Davis before he became a Dodger bust
9. Todd Benzinger before he became a Dodger one-year .239 wonder
10. The old-style batting helmets

Every time I think of Sabo, I think about how he had the misfortune to come along at the same time as the Spuds McKenzie beer commercials. He was doomed to the nickname. The only other instance of this that I can think off the top of my head is Willie McGee, who emerged as the movie "E.T." was a hit. The connection was instant.

Every time I think of Davis, I just get angry. It's natural instinct for a Dodger fan.

Every time I think of Benzinger, I recall that his nickname was "Mercedes."

By the way, this is a photograph of Sabo crossing the plate after the second of his home runs against the A's during Game 3 of the World Series on Oct. 19, 1990. It was the big blow in a seven-run third inning. Davis had singled two batters ahead of Sabo and scored on Sabo's home run. Benzinger came up next and singled as well, chasing A's pitcher Mike Moore.

I don't remember much about the 1990 World Series. It went by so quickly. But I do remember that it was the only World Series that I ever watched entirely on a black-and-white TV (it's all I had in my apartment at the time). I have no memories of color from this World Series (unless I saw a later highlight somewhere years later).

I suppose that's what I like so much about this card. I get to see what that World Series looked like in color.

Night Card Binder candidate: Chris Sabo, 1991 Stadium Club, #165
Does it make the binder?: Spuds is in the binder

night owl said…
An odd feature of this card that I just noticed:

Play at the Plate said…
That jumped out at me: the fact that you can't see anyone's face. Still, it's a great card. I love cards where you can identify the exact moment.
March 12, 2012 at 4:04 AM