Proud to be a card collector 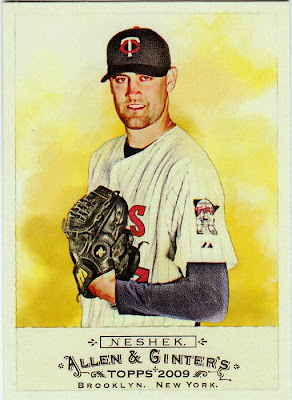 One of the unfortunate after-effects of the news about Topps gaining exclusive rights to make MLB-sanctioned baseball cards, was that it attracted the attention of the mainstream media, and the general blogging public.

Now, normally, that would be a fine thing. Who wouldn't want a little publicity for their hobby, right? But, as is the case in too many stories today, the news item was treated by many with the hit-and-run approach -- find the most sensational angles, frame them in all-or-nothing terms, don't bother to go into depth, stereotype and generalize as much as possible.

Two sports journalists who I like quite a bit -- Tony Kornheiser and Michael Wilbon -- did one of their Pardon The Interruption snippets about the Topps exclusivity news on Thursday. Their only thought during the minute or so they addressed the topic was that the news doesn't matter because no one cares about cards anymore.

Wilbon, who I have talked to in person and agree with quite often, said this: "No one under 50 cares about baseball cards."

No one? It's obvious that's not true. But without actually saying the sentence, they said the baseball card industry was dead. Now, I'm pretty sure I'm alive, so that's at least one collector still breathing. It's a recorded fact that Twins pitcher Pat Neshek collects cards. So that brings the number of suckers up to two. And I'm sending packages of cards to somebody in the mail, and people keep sending me thank you emails back, so that's a few more people.

I know that's not a lot, but come on. Collecting may be dying, but it ain't dead. And I'm not 50 yet either.

But the thing that bothers me the most is the general dismissive tone that comes out of some of these stories -- that collectors (the few of them that there are) are old and fat, bald and single, clinging to a kid's pastime, living in the basement, yada, yada, yada. In actuality, many collectors are young and many are married and have children.

But some of those married collectors deal with a wife or husband who looks down on their spouse's hobby and terms it "for children." More dismissiveness.

I am quite comfortable with my hobby, which hasn't been "for children" for decades. (In fact the reason why people say the hobby is dying is that most children don't care about sports cards anymore). But I'm sick of defending it from attacks by people who know nothing about the hobby. Within moderation, there is absolutely nothing wrong with my hobby. It's a simple leisure activity. And I am proud of it.

-- Connects me with the sport I love
-- Helps me learn more about one of our country's national institutions
-- Helps me learn more about the history of the game, its players, its teams and of what was going on in the world at the time
-- Connects me with my daughter in a very limited, yet very real way
-- Provides a positive outlet from everyday stress
-- Builds relationships and fosters friendships with other collectors in my hometown, across the country and beyond its borders.

My leisure activity does not:

Yet, somehow it is made to feel inferior to other leisurely pursuits. How would others like it if I criticized their pastimes the way that they snicker over mine? For example:

1. Painting. "What are you going to do with all those paintings? We don't have any room for that."
2. Video games. "What's the matter, do you have trouble facing reality?"
3. Comic book collecting. "You know those characters aren't real, right?"
4. Candle making. "Are you trying to burn the house down?"
5. Photography. "Is this just an excuse to take pictures of pretty girls?" OR "You're not going to force me to look at all your photos are you?"
6. Camping. "How can you go that long without a TV?"
7. Raising animals. "You're not going to turn into one of those cat ladies, are you?"
8. Crafting. "So what do you get out of dressing up stuffed animals in people clothes?"
9. Rock climbing/bungee jumping: "Do you have a death wish?"
10. Gardening. "The dog just eats those flowers, what's the point?"
11. Golfing. "So you just hit a ball around for 5 hours and then go home?"
12. Fishing. "So you just sit in a boat for 5 hours and then go home?"
13. Hunting. "So you just stand in the woods for 5 hours and then go home?"
14. Clubbing. "Don't come home with a disease."
15. Antiquing. "You know, I think you're turning the house into a firetrap."
16. Cooking. "Let's eat out tonight!"
17. Coin collecting. "Why don't you just spend all that. It is money, right?"
18. Blogging. "So you just sit on your butt there all day, write something and then hope somebody reads it?"
19. Knitting. "I'm never going to wear that sweater."
20. Body piercing. "I don't love you anymore."

I could go on. Now, keep in mind, this isn't an indictment of any of these hobbies. I have participated in many of them myself and enjoyed several of them (I won't name the ones I didn't).

All I'm saying is, if the hobby isn't hurting anyone and is enjoyable to someone out there, what's the problem? Let them enjoy it without making dismissive comments. If the collector is your spouse, aren't you glad to see them happy?

And to those others, I really don't care if you collected cards when you were 12 and then never collected them again. That's not my problem. That's your problem.

Captain Canuck said…
ugh. Tony Kornheiser. The man who singlehandidly ruined Monday Night Football.
Why would you hire someone to be in the broadcast booth that knows NOTHING about the sport being played?
August 7, 2009 at 10:45 PM

Motherscratcher said…
I do think it's unfortunate the way that the hobby is viewed by some people. It's too bad that the people that don't really know what the hobby is anymore seem to be the ones in front of the microphone lately.

A lot of people collect a lot of different things. I can't explain why baseball cards is viewed as something that should only be for kids and an adult is strange for collecting. At the same time, an adult collecting just about anything else is OK. It's just baseball cards for some reason. Even other forms of memorabilia are OK. It doesn't really make sense.

Anonymous said…
I love this hobby and I hate all the negative vibes goin around! Im 17 and I dont have much money but I love this hobby because this got me into TTM and also very genorous friends who send me nice cards here and there! I mean it beats payin 500 bucks for an auto from steiner sports who are communists! The blogs and bloggers are almost like a family to me and give me things to look forward to!
August 8, 2009 at 12:03 AM

opoohwan said…
I am just getting back into but I agree. My point of view of card collecting has changed through the years. Initially it was a grown up thing. I would get some basic cards, but then just drool over the collections that others had. Then it became a misguided attempt at collecting for resell value. But When I got back into cards it is now an extension of the game, and now that I have kids it is a way to bring baseball to them and get them involved and introduced to a sport that I love to follow and watch.
August 8, 2009 at 12:18 AM

zman40 said…
Great post. I asked Ross Gload for an autograph last year and he said "for you kids sure, since kids don't collect cards anymore". Granted, I am 30 years old, but Ross nailed it on the head. Kids do not collect anymore because they are too expensive. I told him that and he agreeed with me.
August 8, 2009 at 1:35 AM

Play at the Plate said…
Do they give Pulitzer Prizes for "Blog Post of the Year"? They should. Night Owl, thanks for a well thought out post. You captured the thoughts of a lot of collectors.
August 8, 2009 at 10:40 AM

Rod (Padrographs) said…
I collect cards and I am over 50 years old. My wife doesn't seem too perturbed I spend my extra money on it. It doesn't interfere with life, it keeps me off the streets. Baseball and the occassional other sports cards help me connect with the sport, my community (I collect players from my state) and history, I collect President Eisenhower.
August 8, 2009 at 10:46 AM

Anonymous said…
Ya, your absoulty right. Im proud that a collect cards and its fun and relaxing.
August 8, 2009 at 3:07 PM

Tom said…
Excellent post! Card collecting is still alive and strong. People have said stamp collecting is a dead hobby, too; I've traded with hundreds of people all across the world and of all ages, so I'm guessing it is as alive as ever...just as card collecting is.

BASEBALL DAD said…
I'm a little late getting around to reading and commenting on some of the blogs.I've been busy working on my baseball card collection.There I've said it, and I'm almost 60 !! Both of my sons collect and are under 25. I am trying my best to get more young kids involved but video games are stiff competition.Great post.
August 9, 2009 at 9:16 AM