What's going on back there? 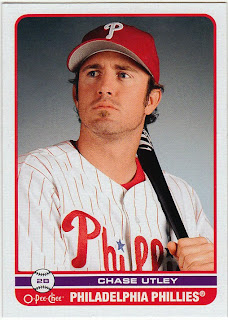 Like I said yesterday, I bought a couple of jumbo packs of Upper Deck O-Pee-Chee to satisfy my curiosity. I had already decided I wouldn't collect the set, although it's one that is supposedly in my wheelhouse, since it's old school/retro/imitation vintage. It just didn't interest me enough to fully commit.

After seeing the cards in person, I know I made the right choice, mostly because of one factor that I'll get to in a minute. But before I do that, I'll mention all that I like about the set, because, really, it is much better than a bunch of stuff that's out there right now:

1. The cardboard stock. Always a plus. They should jettison the super-glossy, index-card flimstrosity that they're printing cards on now and go with the thicker board forever. 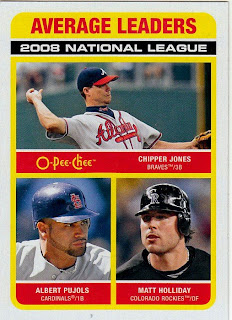 2. The old-school, bright-color look. A lot of folks are saying these cards remind them of 1976 Topps, because of the two bars of different colors across the bottom of the player cards. I can see that a little. What I think they really look like are all of those odd-ball cards of the late 1980s. Especially some of the subset cards like the league leader cards. 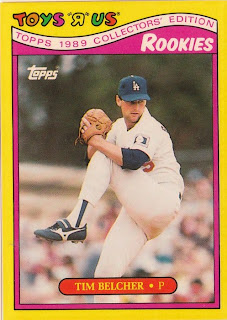 There's an odd-ball '80s card for comparison. I think that card would fit in perfectly with this year's OPC set. 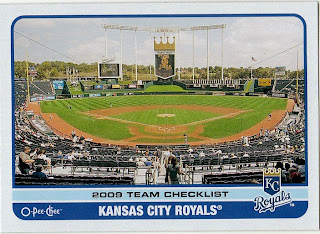 3. The team cards. The stadium shots are a great touch. Team photo day has been done to death. This is much better. 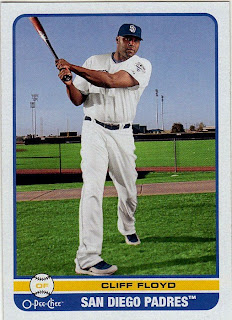 4. Some of the photos are cool. Look at how they shot Cliff Floyd. I know he's a pretty big guy to begin with, but they made him look absolutely giant. I wish there was a person standing on the sidewalk behind him for comparison. 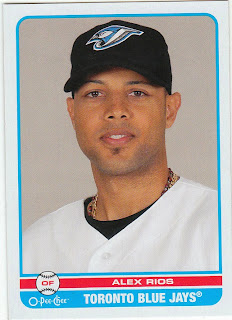 As for the amount of inserts and whether or not this set is truly a set-collector's set, a bunch of people have covered that already. I'll just say, I'm a set collector. I'm not collecting it. So that's my take.

But now we get to the part of OPC that turns me off. You can see it on the Chase Utley card up at the top and the Alex Rios card here. You know what it is don't you? If you don't know, cover your ears because here it comes:

Why hasn't anyone anyone mentioned how many studio shots are in OPC yet? Out of the 48 cards I received, 46 were players and 21 of those player cards were shot in a studio setting. That's almost half! Ahhhhh!!!!!! I just wanna buy monkeycards!

Why do this? And I don't understand why this doesn't bother anyone else. Is it because it's been going on since Stadium Club in the early '90s? To me, calling a ballplayer off the field, out of his element, and taking his photo inside, in front of a backdrop, doesn't convey baseball at all. 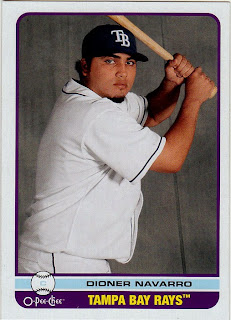 Look at Dioner Navarro in his baggy uniform here. What is that behind him? A curtain? I don't ever want to think about curtains when I'm thinking about baseball. Studio shots are for Hollywood types. Movie stars. Baseball players should appear on a ballfield. Behind them, I want to see sun and sky and grass and dirt and fans and stands and coaches spitting, not ... 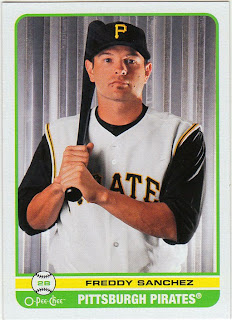 ... VERTICAL BLINDS? Are those blinds behind Freddy? Geez. I know some people complain about too many spring training photos in sets. Personally, I don't have any problem with that. If this is the alternative, take every single player's photo outside during spring training with a palm tree in the background of every last one. It was good enough in the '70s and '80s. I mean part of the fun of looking at a baseball card is determining what's going on in the background.

I suppose some people like this. I suppose it's the continued Hollywoodization of professional athletes (I can't take watching the NBA just because games are turned into Hollywood movie premieres). Give me a country ballplayer on a ballfield, pretending to throw a pitch and smiling for the camera. I know they make millions of dollars, but don't give them another reason to get an inflated ego.

Studio shots are fine if you're going to make a separate insert set/subset to lend special emphasis to the set. But for the base set, mixing the action shots with posed shots in a baseball setting is perfect. No tinkering necessary.

So that pretty much ruins the old-school factor for me with OPC. Although there is one thing with the set that reminds me of my childhood.

They stuck the Dodgers with pink again. Thanks a lot, OPC.

Carl Crawford Cards said…
Couldn't agree more with on on the studio shots. Uninventive portraits are bad enough, but the studio stuff should have gone away long ago.

Like you pointed out with the Floyd, one CAN take something old (the typical guy with a bat in a park shot), tweak it (shoot him from an angle), and make something worth writing about (that card is PHAT).

zman40 said…
Too bad the Kauffman Stadium shot is at least three years old. It brings back memories, though.

I haven't got that card yet and I was wondering if you would be kind enough to list the Royals in the set. I know that Grienke, Soria, and Aviles are in it. And for some reason Shealy (who has been in AAA all year) and Peralta (who was cut in Spring Training) are in it? Any more cards like that that shouln't be in it.
June 27, 2009 at 9:59 PM

night owl said…
Zman, these are the Royals listed on the back of the card:

UD website doesn't have photos of the front of the team checklist cards and I have only seen a few pop up on the auction site so it's been slow going trying to determine which ones I should collect because I want just the ones with stadium shots.
June 28, 2009 at 6:07 AM

Jeffrey Wolfe said…
I agree completely on the studio shots but everything else about this set is old-school and I love it. Except for the 6-card packs. And I love the odd color combinations for the teams. Very retro Topps.
June 29, 2009 at 12:53 PM