What a triple relic will get ya 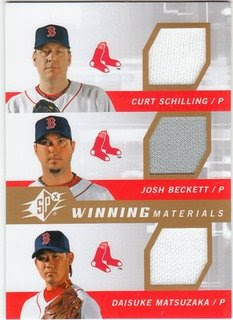 You may remember I pulled this card from a pack of Upper Deck SPx from the hobby shop a couple weeks ago. I immediately put it on the blogging block because I knew someone would be interested in it and give me something nifty in exchange.

That someone turned out to be Ben of Cardboard Icons, who is a noted Red Sox fan and a familiar trade partner. I dropped his card in the mail on Saturday, but I have already received the cards he sent me. And we're going to have a look.

Now, keep in mind not all of these cards were sent in exchange for the relic. A bunch were Dodgers that Ben had set aside already. And I sent him some other Red Sox besides the relic (I actually need to send him a few more). The two cards that sold me on the trade are featured first, then others will follow. 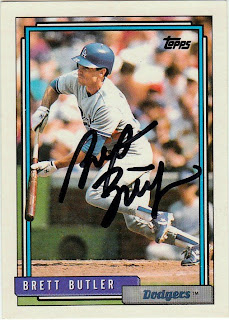 Ben sent an autographed card of Brett Butler. I can't think of a more appropriate card of Butler to get autographed than this '92 Topps. He was a bunting machine. 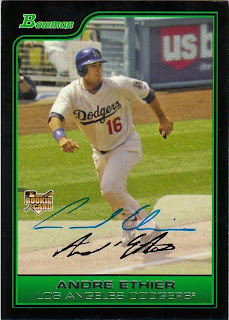 And here is an autographed Bowman rookie card of Andre Ethier. Andre must have gotten finger cramps autographing it because that first name in blue doesn't much resemble the facsimile auto in black. I don't know if it's his actual first card. I'm going to say no. But I'm not telling my brain that. 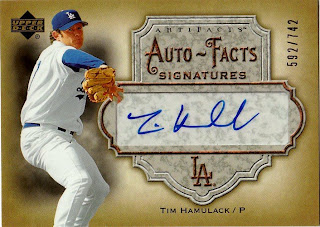 Ben didn't stop there, though, sending this nice card of, uh, Zach Kindred. ...
... What? That's not Zach Kindred? It's Tim Hamulack? Well, look at his signature, it looks like it could be Zach Kindred to me. You'd think a guy like Hamulack, who is an on-the-fringe major leaguer, would want people to know who he was when he signed his name. But he also probably had to sign 742 stickers. So there's that.
OK, onto the random Dodgers that I received. 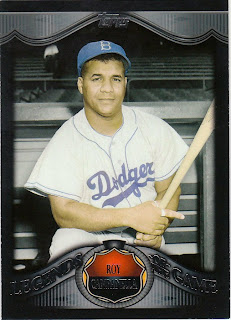 A Legends of the Game insert from Series I, I believe. Most of my '09 Topps collecting has been at Target, so I missed out on many of the Wal-Mart LOG cards. I'm having a hard time keeping up with which LOG cards are at which store. Not enough hours in the day. 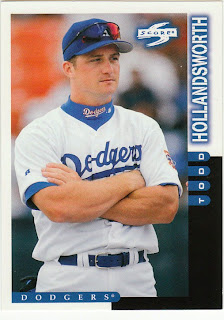 I received a healthy bushel of 1998 Score Dodgers. I stand by an earlier statement in which I implied '98 Score features the thinnest card stock of all-time. If someone would put one in their mouth, I'm pretty sure it would melt (Disclaimer: do not do this, unless you really, really like the taste of 1998 Score cards).
Next up are a bunch of vintage Dodgers. I will refrain from commenting until the end: 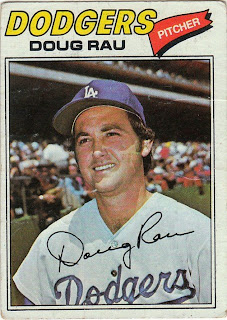 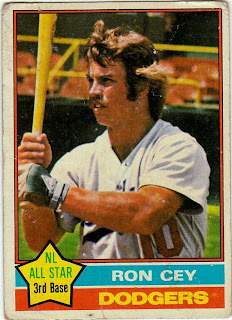 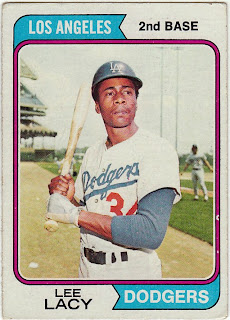 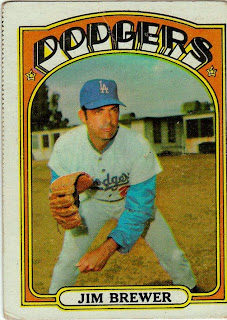 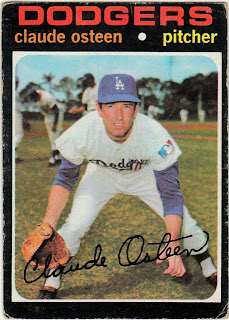 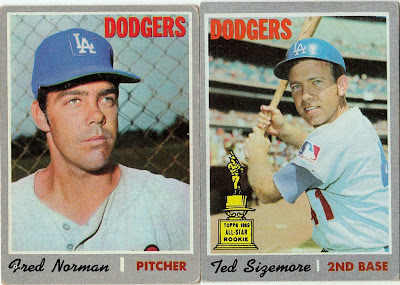 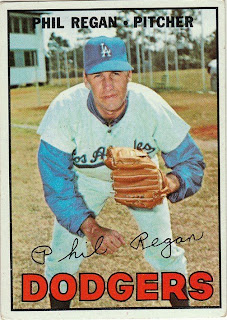 OK, here are the comments:
After all of that vintage, you're probably ready for a more modern card. 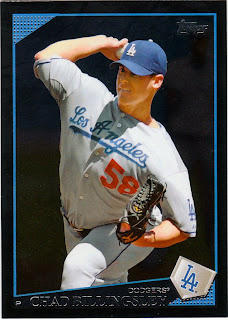 Here it is. One of the few Topps dark variation Dodgers I still needed from Series I (only Blake, Ramirez and Park left). Very happy to have Mr. Billingsley's variation card. Chad needs a nickname, by the way. And don't tell me they call him "Bills." That's not a nickname.
Many thanks for the cards, Ben. Enjoy the triple-swatch-fest card.

zman40 said…
Tim is playing for the Omaha Royals and I was able to get him to sign in Des Moines. His signature looked like that after signing three cards for me. So, that must have been one of the first stickers he signed.
June 29, 2009 at 11:22 PM

gcrl said…
yeah, ethier as an athletic back in 05. i just sent that card to butler to sign. he has a lot of good bunting cards to choose from.

Anonymous said…
Greg, you should know that I got that Butler signed last July. I believe Butler signed that card while he was away from managing after having suffered a stroke -- good back story for its new owner to know. I received that card, an 89 Upper Deck Giants card and two index cards (which I did not ask for) about a week after the stroke. He signed the index cards and added a smiley face.
June 30, 2009 at 12:07 AM