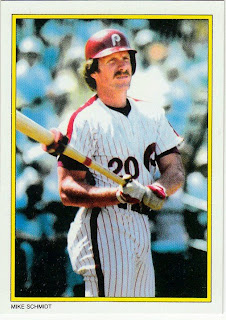 Andy, over at Traded Sets, is giving away some 2006 Mike Schmidt "rookie" cards. He's got a whole bunch and you don't have to do much to get one. One of the ways to obtain one of the cards is to mention his blog, which I kind of just did. I also have to email him the link to this post, which is the tricky part for me. Because forgetting to send emails is one of the things I do best.

So, maybe if I go through all of my Mike Schmidt cards, and pull and scan the ones I like the best, and feature them here on the blog, my aging brain will actually retain Andy's contest rules and tell my fingers to tap out an email to him, and then I'll have another Schmidt in my collection! Sounds like a plan, doesn't it?

The other thing I noticed is Schmidt got screwed on the photos that companies chose for him. There are just some terrible cards of him. Check out his 1988 Topps card, or any of the 1982 Fleer cards he has. The 1982 Topps cards, both the base card and the All-Star card, are lousy, too. Some other less-than-stellar efforts: 1983 Fleer, 1984 Topps, 1987 Topps.

But I was able to weed out five favorites that I'll show here. Michael Jack Schmidt deserves even better than these five. But I'm sure ever since he was inducted into the Hall, he's beyond little slights like that. At least I hope he is. 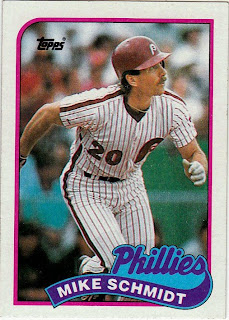 5. 1989 Topps. You may not think this is all that spectacular, but there weren't a lot of Schmidt cards in the 1980s that reflected what he did best, hitting the big fly. I think that's what he is admiring in this photo.

Also, the vast majority of Schmidt cards from the '80s show him on the road, so he's featured in those blue jammies the Phillies wore. And that's never good. This is one of the few home shots. 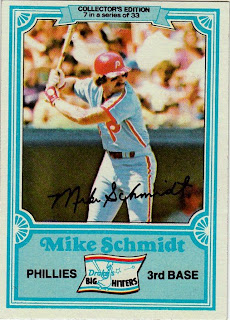 4. 1981 Drake's. I know, it's not a great image, but there is a reason why this card is a favorite. I've mentioned before that there was a time, long, long ago, in a galaxy far, far away, when a player would get one card for the entire year. Whatever image was on that card was the image that was associated with that player for that year. There were no multiple cards of a player in a set, there were no competing companies with different cards of the player. None of that.
So, when we saw this Drake's card, that featured a different photo of Schmidt than the one that was on his 1981 Topps card, it was beyond cool. It was wild. Truly. Believe me. It was. 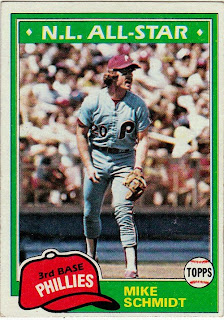 3. 1981 Topps. Here is the '81 Topps card and the Schmidt image stamped in our brain for that year. Any kind of action shot was good back then, even something rather static like Schmidt merely standing out on the field.
But the coolest thing about this card was the All-Star mention on the front. Phillies fans will remember this, but this was only the second time that Schmidt was voted the starting third baseman for the NL in the All-Star Game. You might think someone who was so dominant would have made a few starts by then. But Pete Rose had third base fairly sewed up then. And my favorite player ever, Ron Cey, managed to squeeze in three starts over Schmidt in 1974, 1975 and 1977. 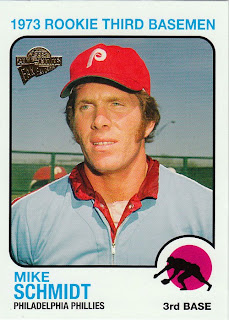 2. 2005 Topps Fan Favorites. Now this is an even better-looking "rookie" card of Schmidt than the one Andy is giving away. Not only do they use the 1973 design of Schmidt's rookie year, but they actually found a photo of Schmidt from around that time period. Check out those sideburns that he was only wearing during the early/mid-70s.
And I can't move on without mentioning the great old school bullpen golf cart with the giant Phillies hat in the background. We took those wacky carts that transported relievers to the mound for granted back in the '70s. Now I look at them and chalk it up to cocaine use, or too much disco, or something. 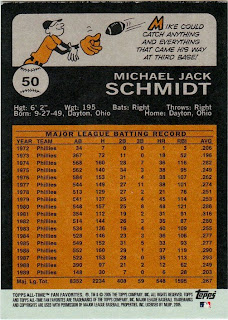 There's the back. The familiar black-and-gold theme of the '73 backs. 1. 1976 Topps. I just remembered that I probably should have included the 1977 Topps card somewhere in this list. I do like that one. But it doesn't top this card, which is my favorite Schmidt card.
I keep meaning to upgrade the card in my continuing effort to collect the '76 set. But the condition of this card reminds me of Schmidt's 1976 season, which really put him the minds of every baseball fan, even though he had already produced two 30-home runs seasons. That four-homer game he had at Wrigley Field in 1976 really made me take notice as kid. And when I pulled this card out of the pack that year, and saw it was a cool action shot, I valued it even more.
That'll wrap it up. How'd I do, Andy?

That fan fav rookie card is pretty awesome. I wish I had a pile of those instead of the ones I've got.