Returning to the sucker club 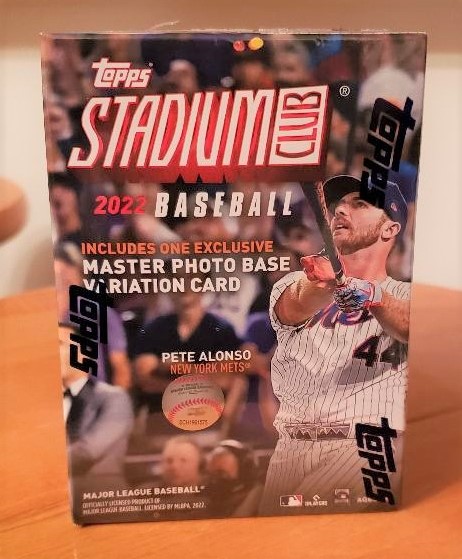 I made one of my six-times-a-year visits to Walmart on Sunday.
I'd like it to be less than that, but I've documented the pitfalls of living in a semi-populated area many times. I tell myself at least it's not as often as 10 years ago when I was making once-a-week trips to find cards.
But speaking of that, I was there to get a couple household items, a combination of which you can only find there, or by ordering online and waiting two weeks for them to arrive in the mail. I naturally ambled over to the card kiosk section to take the edge off. It's really a candy-and-such kiosk but do I see any of that other stuff? No.
It's funny how Walmart has suddenly become the place to go for cards now. Target has been a disaster since mid-2020. But Walmart, which had been a card desert for at least five years, has rebounded a bit. There, I found blasters of Allen & Ginter, Heritage, Stadium Club, Bowman Platinum and various Panini things that didn't register.
I felt lucky. And then I realized that very little there would make me happy. I'm not collecting any of it. I've opened all the 2022 Heritage I care to open. A&G is always fun, but I'm done with that. Buying Platinum would just make me sad, even if there's Dodgers in there I need.
But I succumbed. Stadium Club it was. I still need a couple of Dodgers from that set. I haven't opened any of it yet. The pictures are always nice. These are all rationalizations. Welcome to 2010, night owl! You're a sucker again. And at five-dollars-a-box more!
But enough of beating myself up. We all know these cards are useful to more than my collection. It's trade bait. It's blog material. It's substance-abuse free (well, except for the Canseco card I'm about to show). 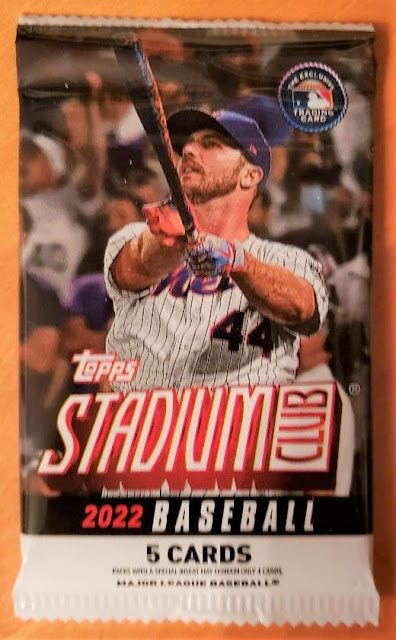 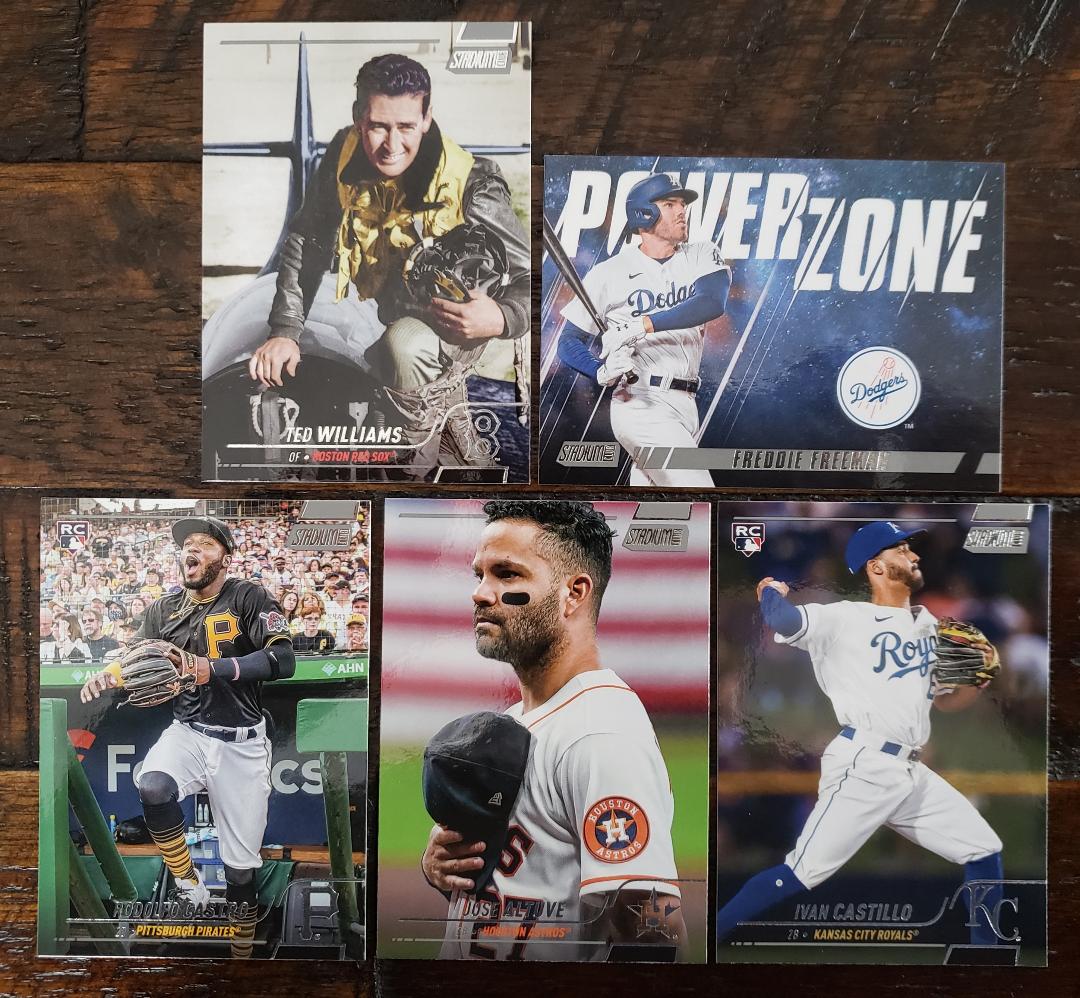 PACK 1
82 - Ted Williams, Red Sox
PZ-15 - Freddie Freeman, Dodgers, Power Zone insert
146 - Rodolfo Castro, Pirates
160 - Jose Altuve, Astros
248- Ivan Castillo, Royals
All right, we see why I'm not buying cards once a week anymore and also why I'm glad I bought this. Glad I bought it because DODGER INSERT. Not buying once-a-week because 2 rookie cards in a 5-card pack is modern-card nonsense. I may be a sucker but at least I'm not a rookie-card sucker.
(P.S.: My dad would really like that Williams card). 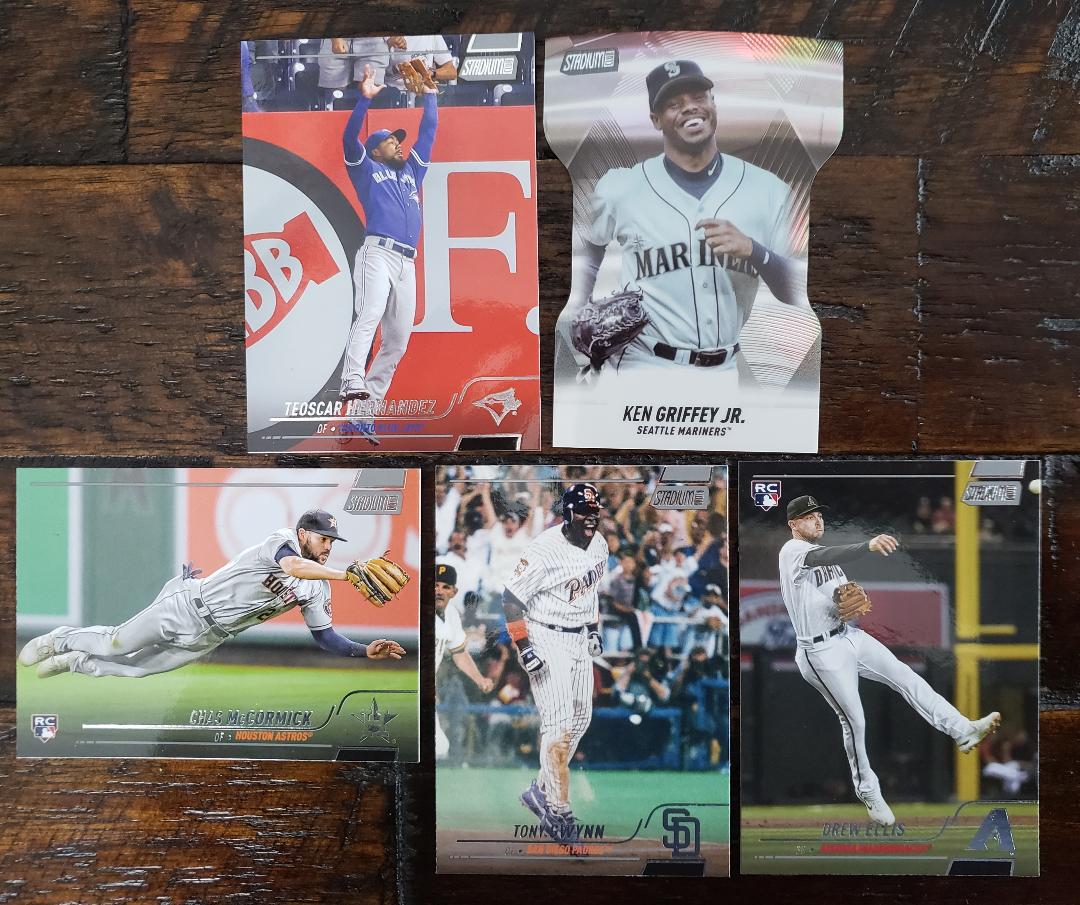 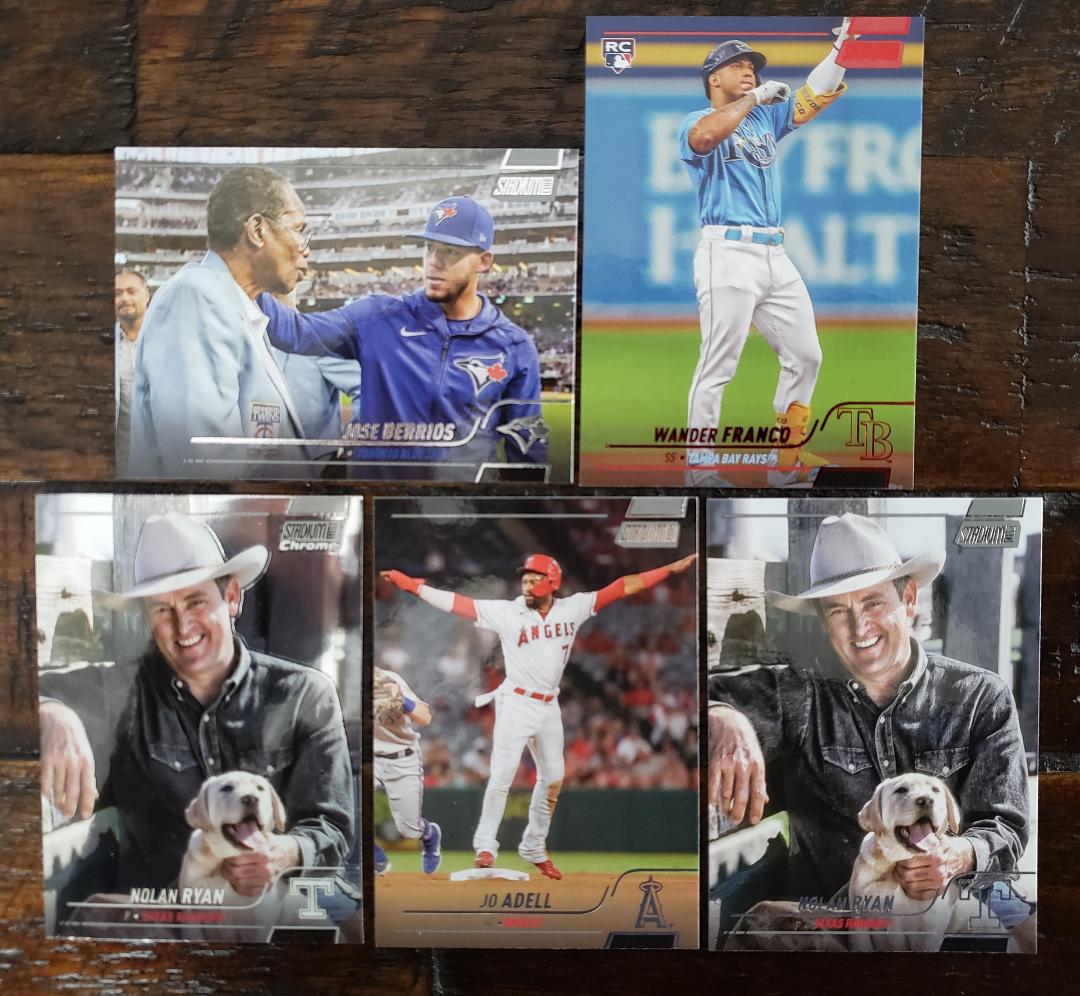 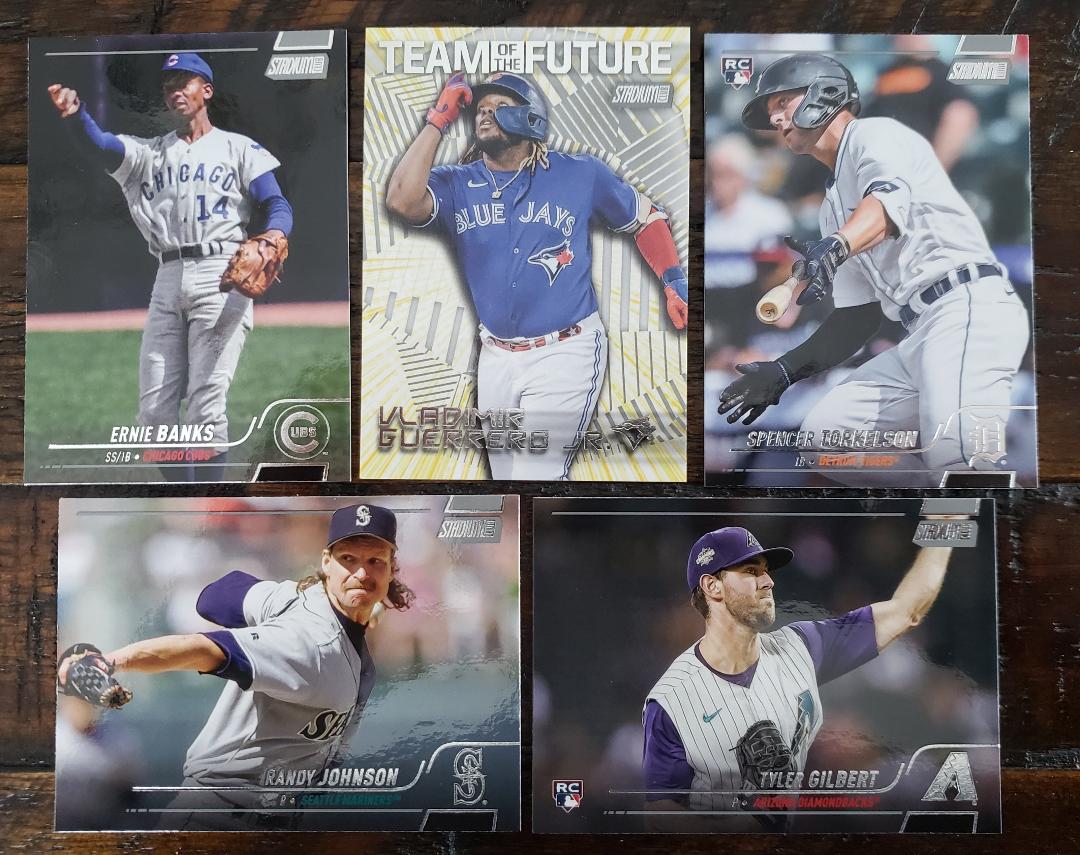 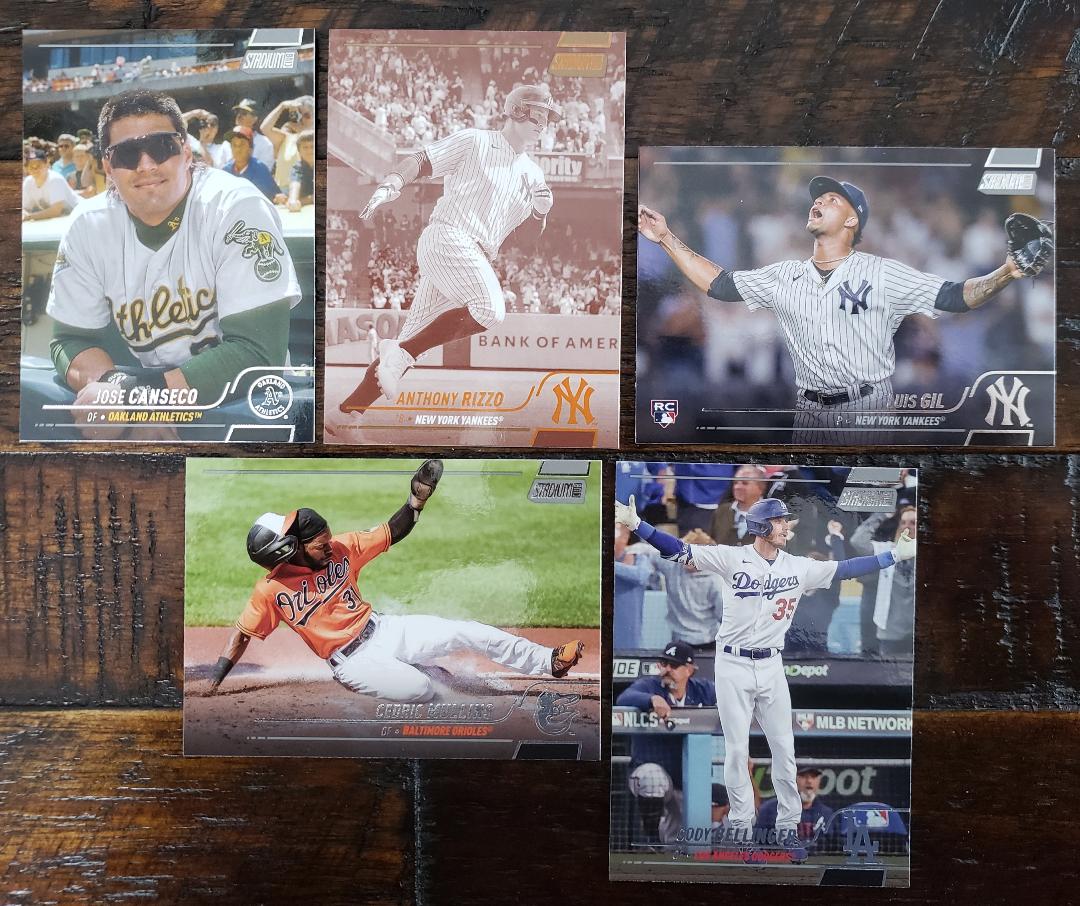 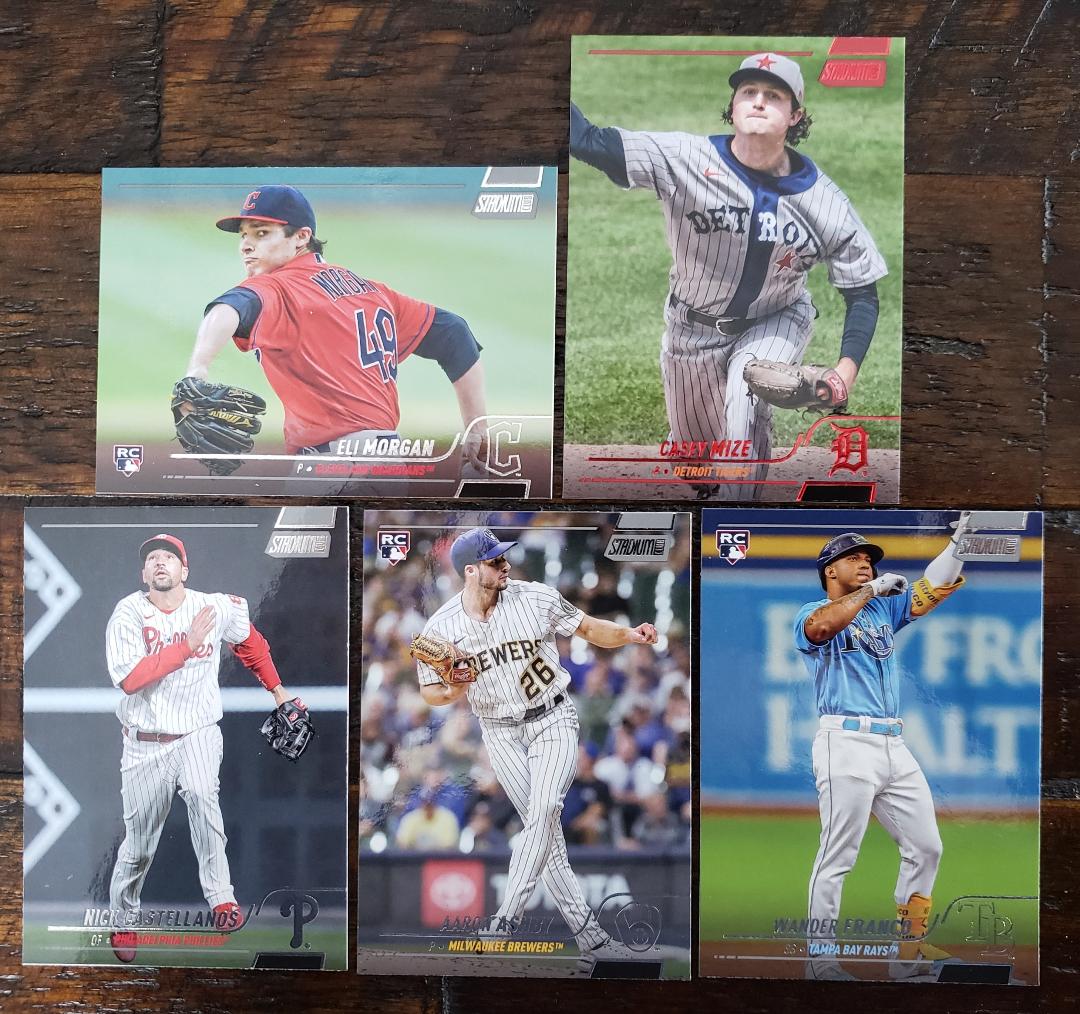 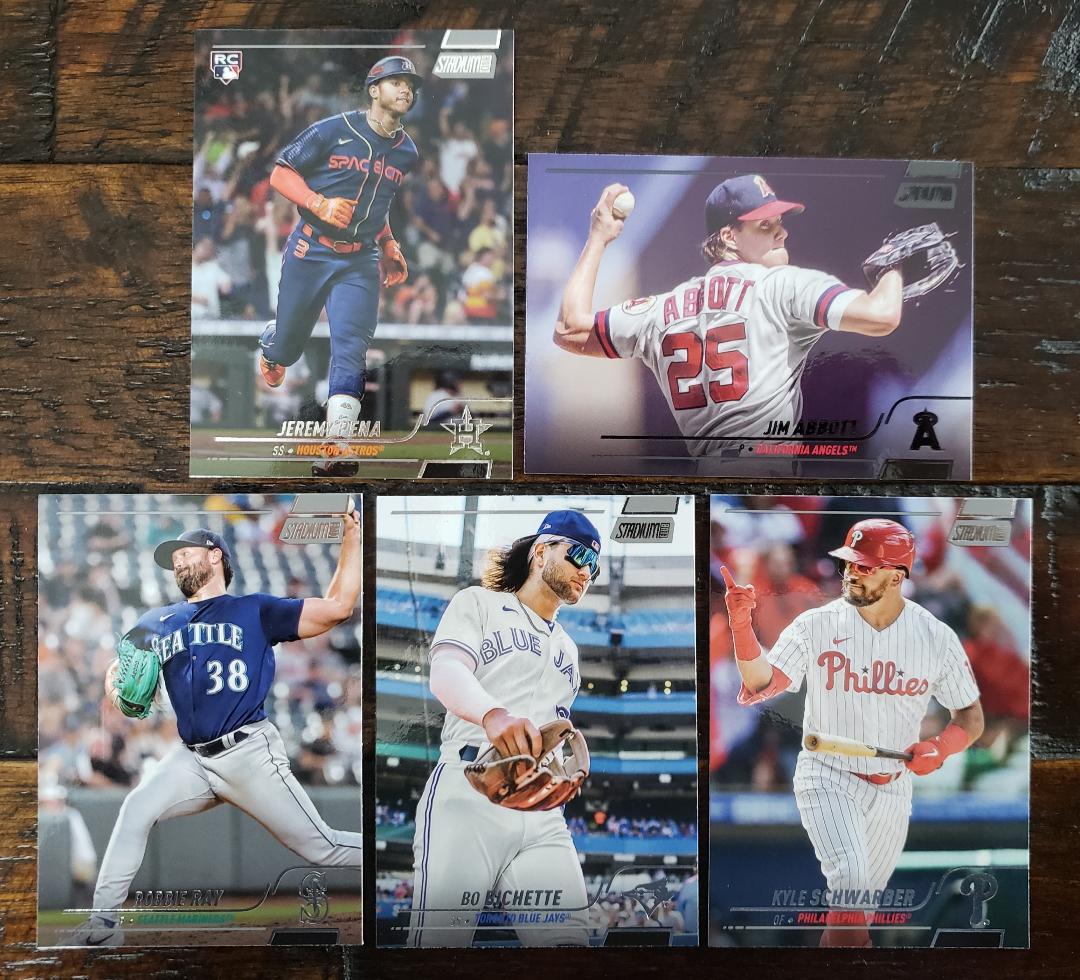 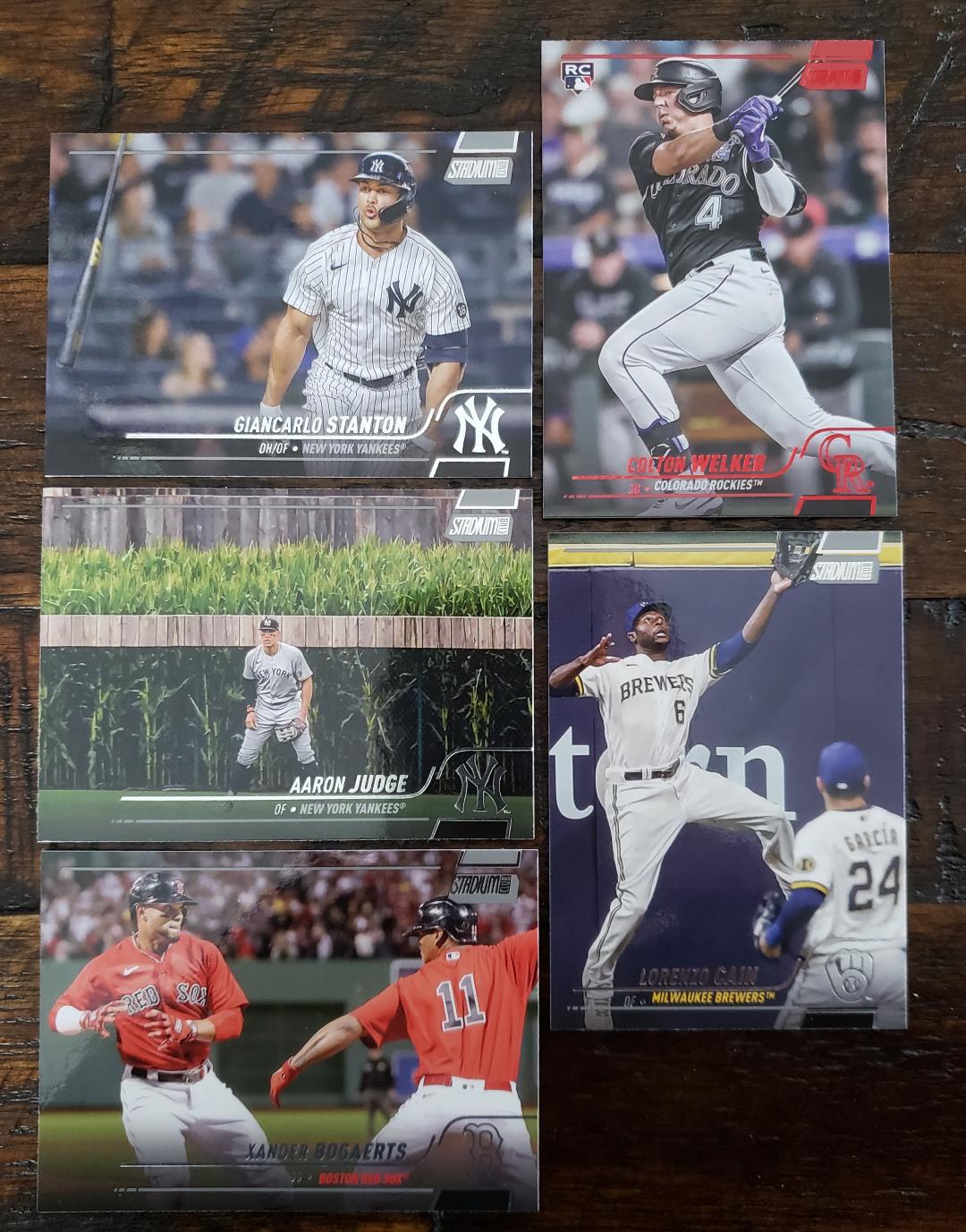 PACK 8
232 - Giancarlo Stanton, Yankees
66 - Colton Welker, Rockies, red foil parallel
161 - Aaron Judge, Yankees
73 - Xander Bogaerts, Red Sox
194 - Lorenzo Cain, Brewers
The Judge card is probably my favorite look out of the box. I must be a sucker for MLB stunts, too. Rookie card count: 12.
So, that's the whole box. For the rundown we've got:
Rookie cards: 12.
Regular veteran players (which make up the vast majority of baseball rosters): 22.
Inserts/parallels: 9.
Cards needed to complete the set if I was completing the set: 34.
Percentage of the set that I received: 11.3%
Price per card: Around 62 cents.
Yup, I'm back in the sucker club. I can't even get interested in most of the images anymore..
See you in a few months, Walmart.
(P.S.: There was also a Master photo insert thingy in the box, but I'm saving that to send to someone. Shh, it's a surprise).

Jeremya1um said…
I wish you could pass that Franco magic to me! I’ve been having Torkelson magic the past month or two.
January 24, 2023 at 8:05 PM

Robert said…
Both the Target and Wal-Mart in my neck of the woods are stocked full of cards. I haven't given in to the Stadium Club "sucker" club so far, but have dipped my toes in a couple of other products in the past few weeks.
January 24, 2023 at 8:59 PM

Fuji said…
Once a sucker... always a sucker. Glad Walmart in your area has cards. I'm not a fan of the Walmarts in my area... but I'm always a sucker for blasters when I go to Target. It's a good thing they never have any blasters on the shelves, otherwise I know I'd buy one.

I've seen several SC posts now and the Judge still reigns supreme. First time I've seen a Gwynn though. Could that be a brand new photo of Mr. Padre?
January 25, 2023 at 12:15 AM

Greg Zakwin said…
The Wanders would make me feel better about falling prey to the temptation. But damn, it's always so tempting.
January 25, 2023 at 3:04 AM

Benjamin said…
See, that's a cool box. I would have loved the Torkelson rookie, being a Tigers fan. The second Franco is great trade bait in exchange for base cards to finish the set. I just can't stomach the $ for that few cards and to be nowhere close to finishing the set (which is my priority).

Jimetal7212 said…
I have a great way of not joining the sucker club, have a Walmart and Target that doesn't carry cards anymore. Haven't seen anything on the shelves in awhile. At least you can recoup most/all of the blaster cost with just a handful of those rookies you aren't going to hold on to...
January 25, 2023 at 9:24 AM

GCA said…
I thought my local Wal-Marts were getting out of the card biz before the pandemic. They have a few things here and there, but I walked away the last couple times I visited. My Target has all the cards behind the customer service counter beyond the registers. I glanced but didn't catch anything that I would take the trouble to ask for.
And like you said, now that Ginter's basically over, my retail hunting is done. These SClubs are decent, but I know I'd be years trying to finish the inserts, so I'm skiddish about jumping in again.

night owl said…
"Cards needed to complete the set" means I found 34 cards that I would need if I was trying to finish the set.

Re: the Rizzo card. I'm confused now. According to Beckett, the black-and-white parallels are hobby-only. But there is no "sepia" parallel listed and after the list, it shows a Mookie Betts card that clearly looks like the Rizzo. So, shruggy shrug. https://www.beckett.com/news/2022-topps-stadium-club-baseball-cards/
January 25, 2023 at 1:15 PM

The Diamond King said…
Now that's one of the few boxes I have seen busted that I wish I had bought for myself! I never see them around here, but I even like the RCs, especially the red Wander and the Pena. Congrats!
January 25, 2023 at 10:39 PM

Doc Samson said…
You’re probably like me, Mr. Owl. There is something alluring about opening a pack as opposed to purchasing cards online. Perhaps it’s a memory berry when we used to rip open packs way back when Topps was the only card company. You had a nice hall, BTW.

On another note, I would love to hear your thoughts on Stadium Club’s first set in 1991 and its long-term impact on card collecting and manufacturing.
January 26, 2023 at 12:38 AM

Nick Vossbrink said…
This thing where 20% of what you buy are cards you don't want makes it really really hard for me to justify ripping Stadium Club.
January 26, 2023 at 12:53 AM

Bo said…
Too bad Topps thinks that good photography only belongs in one set.

Don't know if you saw Johnny's response to your comment on my blog, but he wants you to send him your Laughlin want list.
January 26, 2023 at 12:40 PM

Jafronius said…
I'll have to defend the Targets around me, they have been pretty good at stocking for a few months now. The Wal-Marts around me have slowly caught up. I agree with the others, it was a nice box rip.
January 28, 2023 at 3:15 PM

Nick said…
I can't remember the last retail card purchase I made, which I suppose is a good thing because I've noticed the massive rookie influx as well. I get that most sets need to have a decent crop of young stars, but it seems like it's been getting out of hand lately.
January 28, 2023 at 11:29 PM