Collecting is a full-time job 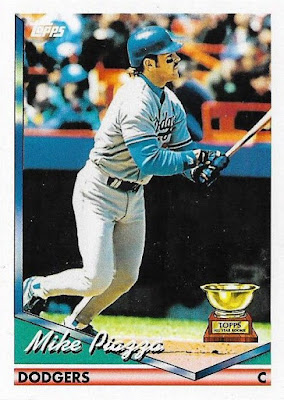 I've mentioned a number of times that with the number of different sets and parallels and variations out there today that card collecting these days could become a full-time job, if you let it.

There is so much to keep track of, just from the Heritage standpoint alone -- error variations, uniform photo variations, action photo variations, team name color variations (oh, brother), gum-stain-back variations (even dumber), red-back parallels (huh?), mini parallels (of course), chrome parallels, black refractors, gold refractors, hot box refractors, and, oh did we mention the last 75 cards are short-printed? -- that even if you attempt a fraction of the list above, I don't know what you leave out of your life to get it done, but you're leaving out something.

And it's not just with Heritage, it's with every set, and has been for quite some time.

There is so much to occupy your time with this hobby, more so than ever before.

Here is one other example.

Tell me which card here is the actual 1994 Topps Mike Piazza card.

The one on the right, you say? 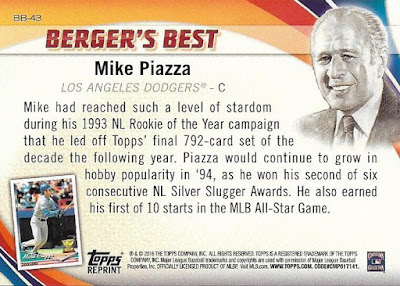 Wrong. It's the Berger's Best insert from this year's flagship set.

The one on the left? 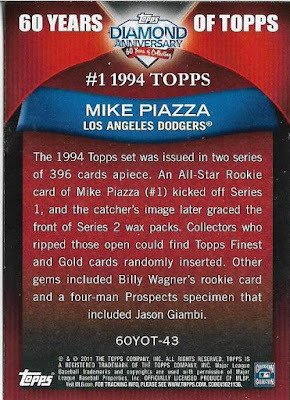 The actual '94 Piazza is the one on the left in this scan. It is different from the other two Piazzas (outside of the card back being different) in that the color of the team-position bar on the bottom is darker and the rookie cup logo isn't as well-defined as it is in the inserts -- you can read the rookie cup lettering better on the inserts. Also, the script player name writing is more angled on the original than it is on the inserts.

But say you're some mom who doesn't know anything about baseball or cards who is picking up a 1994 Piazza rookie cup card for her budding baseball collector at home. We know how sloppy online sellers can get. Is she going to look at the back? Is she going to compare player name script? Why are we comparing Topps' own cards with each other like we're trying to determine whether a card is counterfeit?

Fortunately, I know the difference because I try to keep up with what's in each year's baseball product. But I'm one of those diehards who writes a daily blog about baseball cards.

The Berger's Best insert, to me, is the biggest disappointment of the 2016 Topps inserts. This could have been an appropriate tribute to the man who made Topps the icon that it is.

Instead of merely republishing its own famous cards, something Topps has done many times, it could have made each of the inserts unique, perhaps by featuring a smaller image of the card on the front, in conjuction with another photo of the player, and a stylized heading that says "Berger's Best." Hell, you could throw Berger's mug out there, too, you're paying tribute to the guy.

If I could do photoshop, I'd make a mock-up myself because the idea in my head is a heck of a lot better than "let's reprint the card we just reprinted five years ago."

I am aware that Topps doesn't expect collectors to complete every insert set, every parallel set, etc. It's up to collectors to figure out what they can do and what is allowed in their budgets. Topps is just trying to stay afloat, and be all things to all collectors. I am also aware that Topps likely has much more limited resources than we collectors assume it has. And I also know the chances of confusing a reprint with the actual card is probably quite slim (although I'm sure it's happened many times, especially with reprints of '90s cards where everything is glossy).

But now you know why I am eternally nostalgic for the days when there was just one set to collect and nobody got bored with it.

Collecting was something you did at recess or after school got out. And you could fit it into the time you had before your mom or dad turned out the lights. And you didn't lie awake at night feeling like you were missing half of what was being offered.

In other words, it wasn't a full-time job. 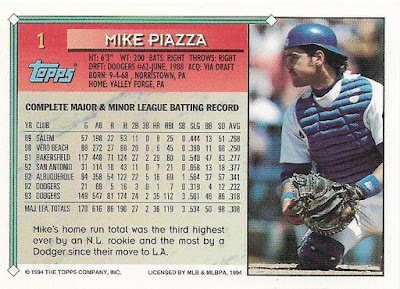 deal said…
I like the fact that there is a discussion of the card on the back (kind of like blogging), but yeah since a lot of the text is similar to what was just written a few years back that is a... redundant.
March 8, 2016 at 8:19 PM

Adam said…
I'm with you. I really don't see the point in reprinting the same cards multiple times over the years for different insert sets. Heritage, I can see why they do what they do with the variations, errors, and what not. It's a way to pay homage to the particular set design they are using. But still, the reprinting of cards numerous times is annoying.
March 8, 2016 at 8:33 PM

Nick said…
I often wonder how people who analyze the backs of Heritage cards for error variations, gum stains, etc. don't end up losing their eyesight and/or their minds.
March 8, 2016 at 8:53 PM

AdamE said…
When the Powerball was a billion last month (or whatever) I bought my very first lottery ticket of any kind. (Never even a scratcher before) If I won my plan was to be a full time card collector. (When I want on vacation to whatever tropical island I bought)
March 8, 2016 at 10:40 PM

bamlinden said…
While the hobby doesn't feel like a full-time job, keeping up with my player collection master checklist does. There are so many products with 10...20...30 cards in each. It's ballooned my wantlist exponentially over the past couple years.

But....I see the positives in it. Cards I chase don't tend to hold their "value" as long so patience becomes key. In fact, it's fun when I can grab a card for a great price.

Why companies create so many similar looking items is beyond me. I feel like products are definitely being geared towards player collecting or just flat out "hits" as opposed to the old-school set collector. It's a shame because I think a lot of people (myself included) would enjoy a simple set build if the parameters weren't so out of whack.

At the end of the day, I am in sole control of how I approach this hobby and how I enjoy it. I can't put blame on anyone or anything else. If I'm not happy with things...I need to alter how I do things. I should not rely on a card company to cater to my every need. I think for the most part they do a good job...its' up to me to decipher how I want to approach collecting.

Tony Burbs said…
You forgot to add "sitting on a mountain of cash" to your list of qualifiers for full-time collecting!
March 8, 2016 at 11:38 PM

Anonymous said…
The gum-stained nonsense is bad enough (why not have miscut or creased parallels while you're at it?), but apparently there are variations in Heritage that involve "San Francisco" being misspelled on one line of Hunter Pence's stats, and another card where the variation involves a dot added to the "i" in Mike Zunino's facsimile autograph. You have got to be effing kidding me.

Jeremya1um said…
The Bergers Best set is a joke. They should've put a pic of him on the front and maybe went in depth about the design he came up with or give some story having to do with Berger and the card, not just make a reprint and slap his name on the back and talk more about the card than the man the insert was named for.

I don't care for all the variations and sps and the like in sets. I too miss the days when you just have a set and a few inserts with it and maybe a Gold parallel set to go along with it. Wish they could keep the parallels to maybe 2 per set and have no variations or sps and crap like that. You're totally right about it being a full time job if you let it.
March 9, 2016 at 4:54 AM

BobWalkthePlank said…
Heritage is the must frustrating set when it comes to variations and parallels. You need cardboardconnection.com up just to tell you how to find half the errors.
March 9, 2016 at 8:11 AM

Big Tone said…
I like the idea of a smaller shot of the rc and a larger pic of the same player on the last team he played with or the team he is currently on.Although since I'm just getting back into collecting,i don't mind the reprints so much.I am also not as entrenched In the hobby to even know who Berger Is so owning a card with his mug on It really wouldn't interest me. I just wish baseball cards would go back to just featuring baseball players and managers and anything closely related to the actual game.Like the "first pitch" inserts.I could give two craps about who threw out the first pitch before a baseball game and would rather pull Mets bench player over an Abby Wambach anyday.
March 9, 2016 at 10:46 AM

GCA said…
Jeremya1um nailed it. Berger's Best has nothing to do with Sy at all. They got lazy...again.

I actually did complete a Heritage set! I'm almost 50, single, own a house, and spend a lot of time on cards. It only took me eight years! http://thecollectivemind.blogspot.com/2016/03/i-actually-completed-heritage-set.html
March 9, 2016 at 12:20 PM

Fuji said…
When I was looking for your 2001 UD Decade needs, I noticed how well you document your needs. Then it hit me. Holy cow. How they heck do you keep track of all of these cards and still find the time to write such detailed and well thought out posts. 98% of the time I enjoy collecting... but there have been at least a handful of times these past few years where I almost stepped away from this hobby, because it seemed like more work than pleasure.
March 10, 2016 at 12:08 AM

beefman said…
Ha! I lined up these 3 cards myself about a week ago and was thinking exactly the same thing! Wow, that's an incredible coincidence when you think about it. Great post, Mr. Owl ☺