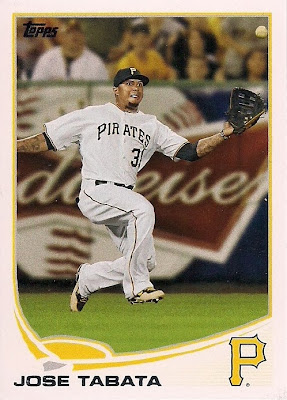 It's that time of year when I begin to put the past year's uncompleted sets away (thanks a lot, Topps). I take them from their stacks on a desk and store them in boxes.

While leafing through the cards, I took note of this excellent night card item, and of course the Budweiser sign displayed prominently in the background.

"Silly Topps," I said to myself, shaking my head internally (yes, it can be done). "Handing out free advertising again."

I've noted this at least a billion times before, and devoted an entire post to it a couple of times. Each occasion I mentioned that there is a ton of advertising in ballparks, even more so than 20 or 30 years ago, and that it's impossible for the ads not to appear on cards these days. But it's also possible that there is a deal between Topps and advertisers to get those ads on cards.

But as I was going through the 2013 base set, I began to notice that there weren't as many ads in the background of photos as I thought there would be. And it occurred to me that the close-cropping of photos the last 2 or 3 years might be the reason. 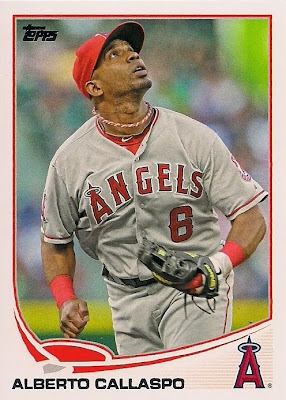 How are you going to see any ads if all you can see are the creases and crannies in Alberto Callaspo's neck?

I began to look at the close cropping trend a little differently. Maybe Topps isn't cropping so tightly on the subjects lately to get those super-emotion, "we take you as close to the game as you can get" moments. Maybe they're cropping tightly to avoid free advertising on cards. Maybe they're trying to satisfy their license with Major League Baseball and only show ads of MLB sponsors.

Here is a list of the official sponsors of Major League Baseball according to the MLB website:

Including the Tabata night card with the Budweiser ad, I was able to find 19 cards in the 2013 set with advertising where I could determine what was being sold. There were many, many ads on other cards that were so blurred out or obscured that I couldn't figure out what it was. I'm sure that's by design.

But among the ones that weren't -- or not enough anyway to go undetected -- were the following: 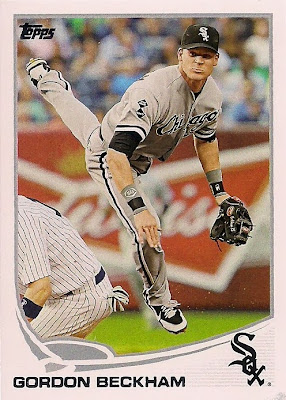 More advertising for the King of Beers 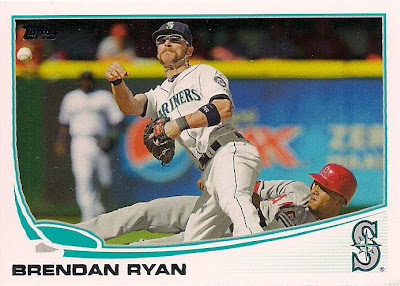 Here's advertising for another MLB sponsor, Pepsi (I still don't really know what Pepsi Max is). 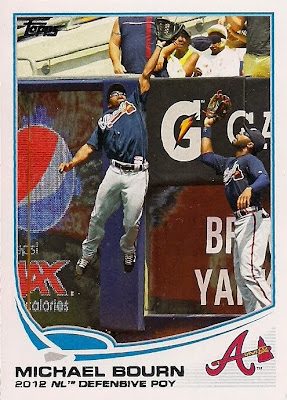 And there's advertising for Pepsi and MLB-sponsor Gatorade. 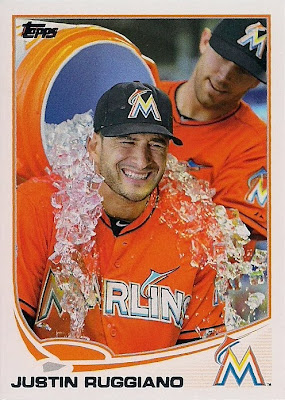 You can't see the Gatorade logo on this card, but there's no doubt that's a Gatorade tub of ice spilling out on Ruggiano. 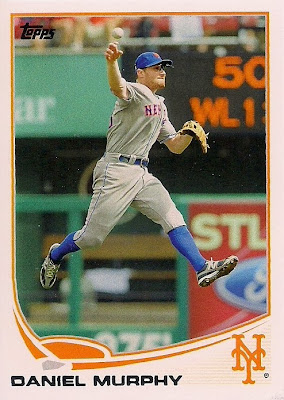 Advertising for MLB-sponsor Ford in the lower right corner. 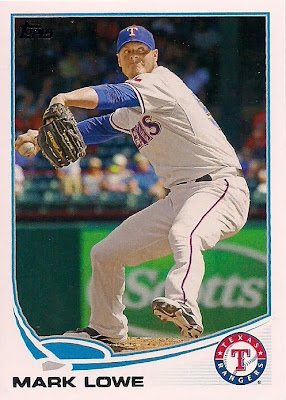 And there's MLB-sponsor Scotts, also in the lower right. 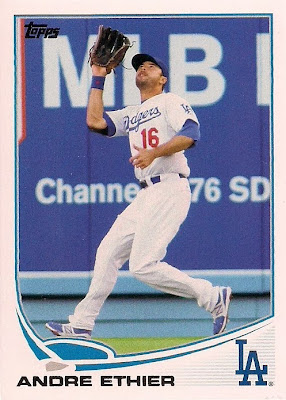 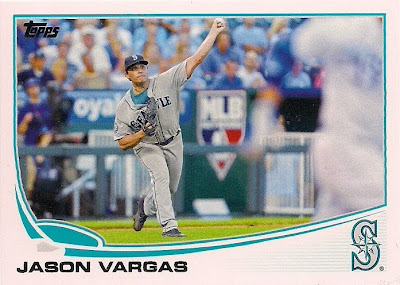 Of course, MLB is in business for itself with a number of ventures. And Topps gets those in on a couple of cards, too.

Now, this isn't to say that the 2013 set was totally successful in advertising only official MLB sponsors. 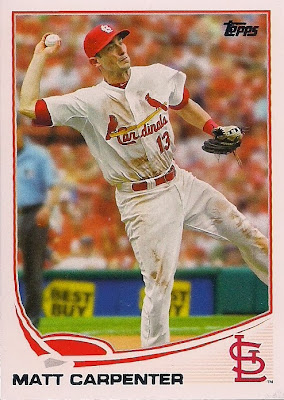 Here is an ad for Best Buy. But Best Buy does sell phones by MLB sponsor T-Mobile. 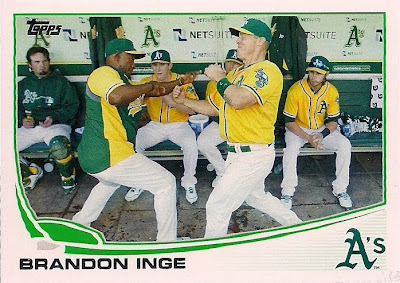 There is an ad on the dugout wall for NetSuite, which is involved in cloud computing, which is also a specialty of MLB-sponsor EMC. I would assume that would put them in competition, but I know little about the advertising world and the computing world.

Lots of advertising for the Carrier Corporation, which isn't listed as an MLB sponsor. Again maybe Topps swung a side deal.

Here's more advertising that I couldn't connect directly to MLB: 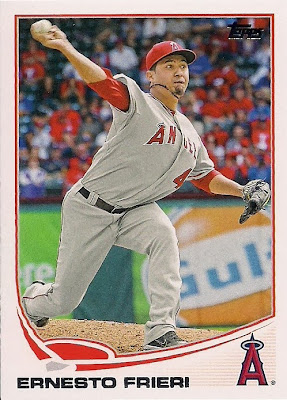 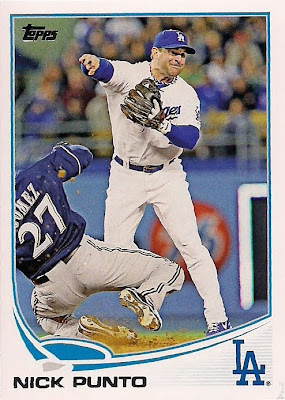 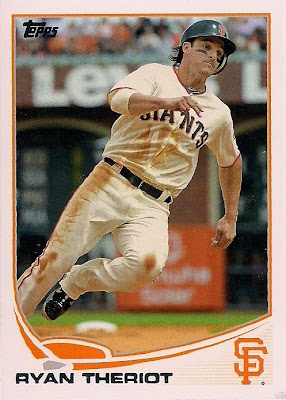 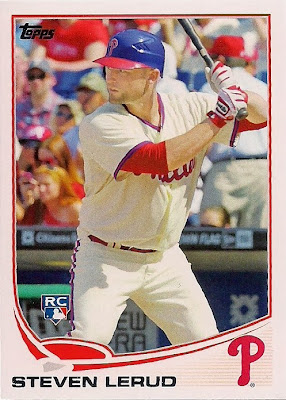 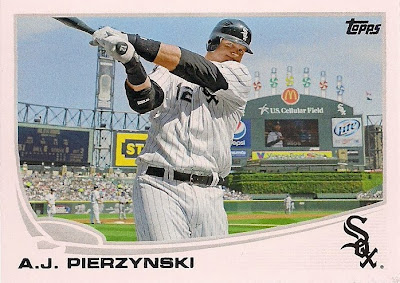 But that's all the advertising I could find in the 2013 set. Granted I don't have the entire 2013 set (thanks again, Topps), but that's still a seemingly significant drop from a set like 2009 Topps.

So, I'm not sure what this means. Perhaps it's impossible to eliminate all advertising except for MLB sponsors. Perhaps these other companies shown really are MLB sponsors in some sort of "non-official" capacity. Perhaps Topps has separate deals with other advertisers. Or perhaps Topps had no intent with the ad placement at all (which is hard for me to believe).

At any rate, I am now looking at the close-cropping of photos in a new light.

All thanks to a single night card.

Night Card Binder candidate: Jose Tabata, 2013 Topps, #31
Does it make the binder?: Yes. There is another #31 night card, but I need that one for a set quest.

Quick - who manufactures all the uniforms for the teams? If you said "Nike", you must send me all your Mantle rookie cards. It's Majestic, but considering the undershirt of all the MLB players, you would think otherwise.
November 24, 2013 at 9:11 PM

Play at the Plate said…
Greatness. Pure greatness and further proof that sometimes the most interesting thing on a card is NOT the featured player.
November 25, 2013 at 5:02 AM