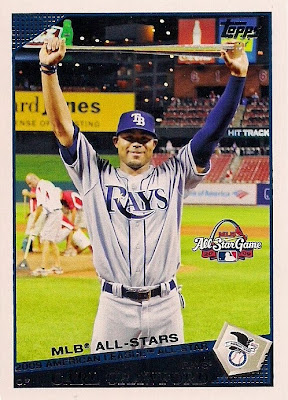 I didn't think I'd have time to post today what with the 14-hour work day that comes attached to every second weekend in November. But I've managed to squeeze in a short write-up just from a couple of cards I had lying around.

When I first started noticing night cards and that I liked them, part of the attraction was how seldom they appeared. Night games were such a novelty that they rarely appeared on cards and were confined mostly to cards that referenced the postseason.

Today, night games are everywhere and so are night cards. I no longer have the fear that I will run out of night cards to feature on this blog -- yes, this was an actual concern in the early days of this blog -- I know I'll have new ones for as long as I want to do this thing.

This is just one example of how pervasive they are.

The card above is one of my favorite night cards, just because it's filled with stuff you almost never see. Carl Crawford is celebrating his selection as the 2009 All-Star Game MVP by lofting his trophy, while the grounds crew cleans up the infield. It's fun, there's a lot going on, and, best of all, it takes place at night.

But today, with cards that I have just sitting out: 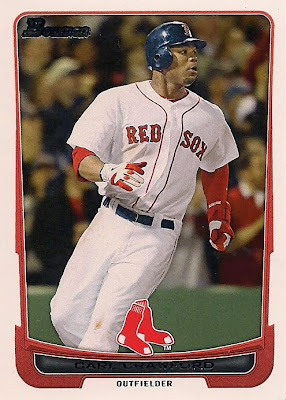 "There's my night card of Carl Crawford. He's in a Red Sox uniform." 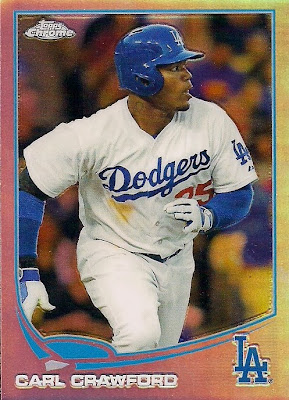 There's my night card of Carl Crawford. He's in a Dodgers uniform."

Today, the choice is yours. As often as a player changes teams, you can probably get a night card of that player in your favorite uniform.

It takes away some of the novelty, probably some of what made a night card special. But it doesn't really bother me.

Night card binder candidate: Carl Crawford, 2009 Topps Updates and Highlights, All-Star, #318
Does it make the binder?: Yes (Also, Red Sox Crawford also makes the binder. But Dodgers Crawford does not -- it goes in the Dodger binder)

Anonymous said…
Everyone's blogroll shows my last post as being on Friday, but I posted new stuff both yesterday and today. I guess I'm low priority because I'm on WordPress.