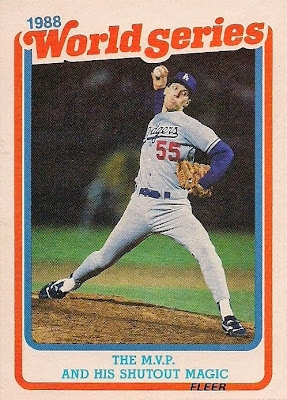 Twenty-five years ago today, the Dodgers won their most recent World Series title (yes, I will be continuing on the postseason theme for a couple more posts -- you expect me to open Topps Update or something?)

I wish I could tell you exactly what I was doing on Oct. 20, 1988, but I can't even tell you if I was watching the game. (My records show that I had a story published in the Niagara Gazette on Oct. 21, 1988, so it's possible I was working that night -- although it was a high school football preview story so it could have been done in advance).

But everyone knows what happened that game. It was the night that Orel Hershiser solidified his Bulldog reputation, pitching his second complete-game win of the World Series in Game 5 and clinching MVP honors.

While reviewing this game, I couldn't help but think of last night's game between the Tigers and Red Sox. For the second time in the ALCS, Detroit starter Max Scherzer's magnificent performance melted away in a spectacular blazing flame-out by the Tigers relief staff.

Scherzer was not allowed to complete either Game 2 or Game 6 of the ALCS, and the Red Sox responded by torching Detroit's relievers for grand slams in each game.

During the 1988 World Series, Hershiser first pitched a three-hit shutout in Game 2. He didn't get into much trouble in that game. But there were a couple instances where you wonder whether he would have been removed if pitching in that kind of game today.

Hershiser barely broke 100 pitches for that entire game and the Dodgers were cruising with a six-run lead since the fourth inning, so it's possible that even in 2013 he wouldn't have been removed that game.

Game 5 was a little rockier for Hershiser. Staked to a 2-0 lead on Mickey Hatcher's two-run home run in the first inning, Hershiser encountered trouble in the third, allowing singles to the first two hitters. But with men on first and second and a run already in, Hershiser famously retired Jose Canseco on a groundout.

Now we switch to the present tense to enhance the drama: The Dodgers' lead grows to 5-1 over the next four innings and Hershiser reaches the eighth inning. This is the inning in which he surpasses 100 pitches. He walks the first batter, Tony Phillips, who then reaches second when Weiss grounds out. Stan Javier then singles and drives in Phillips with the A's second run.

No. Dave Henderson comes to the plate ... and walks.

Canseco comes to the plate.

No. Canseco pops out to first. Two outs.

Dave Parker comes to the plate.

No. Hershiser throws a wild pitch and runners Javier and Henderson advance to third and second, respectively.

No. Hershiser strikes out Parker swinging for out three.

Hershiser gave up a two-out single in the ninth inning, but with a three-run lead, it was inconsequential and the Bulldog clinched the Dodgers' World Series title.

Of course, circumstances between Hershiser and Scherzer are different. Not only are they vastly different eras, but the mind-set of those eras creates different pitchers. Scherzer, I don't think, has ever pitched a complete game, while even just five years into his career, Hershiser was a veteran of the complete game by the '88 World Series.

Also, last night's game was a lot closer. And, given that it was only the ALCS, the Tigers would have needed Scherzer for the World Series and didn't want to blow all his energy in Game 6 of a playoff series. Meanwhile, Game 5 of the World Series could have been Hershiser's last shot at competing in the postseason.

But it's interesting to think what the Tigers might have accomplished if Scherzer was allowed to complete one of those games. If pitch count wasn't still such a crippling stat.

Perhaps the Tigers could have been aiming for their first title since 1984. After all, it's been 25 years for the Dodgers, but it's been 29 for the Tigers.

Awesome night card: Orel Hershiser, 1989 Fleer 1988 World Series set, #11
Does it make the binder?: I think I have a double of this card somewhere. If I can find it, then, yes, it will knock out this card.

BaseSetCalling said…
woulda been interesting to hear Hershiser's call of the game but some other doofuses were on the ESPN radio call so I stuck with my homer announcers. Hopefully he is on the World Series broadcasts; though I do like the KMOX team well enough, and the similar crusty vet / heir-to-be team in Boston. But I like hearing the call from veteran ball players.
October 21, 2013 at 11:31 AM

Nice card. Just to get your OCD going, remember that there is a glossy version of this card to be collected.
October 21, 2013 at 11:43 AM