A gift from the vanquished 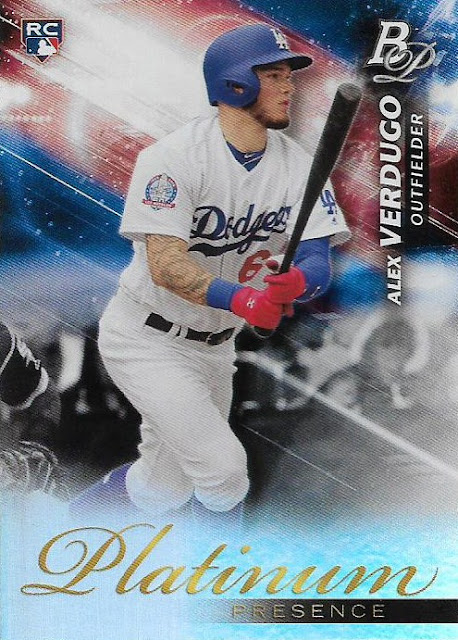 Living in Upstate New York all my life, I know which baseball fans I am going to come across on a regular basis:
Yankees fans, without a doubt. More of these than anything else. I don't get it. But it's obviously the chosen team around here.
Mets fans to a lesser degree. Over the years, the ranks of Red Sox fans have grown in this area and it's probably equal to the number of Mets fans I come across now. Dodgers fans are in the definite minority, but they exist and I've always known others besides myself.
Over the many years, I've come across fans of almost every team. I can think of Mariners fans I've known here in the Northeast. I've known Angels fans and A's fans. I've met Twins fans, Royals fans and Rays fans.
But one kind of fan I know I have never met in more than 50 years on this planet is a Padres fan.
I had never heard of such a thing growing up. When I was a kid, the Padres were the worst of the worst. Why would someone be a fan of them? They were awful. My brother, a Red Sox fan, bought a Padres plastic helmet as a joke. He ordered a Padres yearbook as a joke. As kids with imaginations, we would pretend our stuffed animals talked and we'd give them personalities. One stuffed bear in particular was given a nasty personality, he was an outcast, said the wrong things and liked the wrong things. He was also a Padres fan. Because that's what such a miserable creature would root for, a team that nobody else liked.
Fast forward 40-plus years into the future. The Padres are the darlings of the baseball media. They are the go-to team for those who worship young stars rather than root for teams. (After the Padres were eliminated, some guy who apparently writes for a major network tweeted something like "I don't give a (bleep) about who wins the World Series, Padres and White Sox were the two most fun teams in baseball this year." OK, dude, have another brewskie). And here's something that would blow away 11-year-old me: I actually know Padres fans.
Well, I "know" them in the virtual way. Also, they're way over on the west coast. So I still haven't actually met one.
They're pretty nice, too, not like that stuffed bear at all. One of them comments on all of my posts. And another one sends me cool stuff.
The one who sends me cool stuff shipped another package to the nest recently. He didn't put his name on it. But I figured it out from the zip code. Can't fool me, Rod.
All of this came my way even though the Dodgers just swept the Padres in the NLDS. OK, so the package arrived before that, but it's nice to have something to celebrate my Dodgers' victory and sent by a Padres fan! 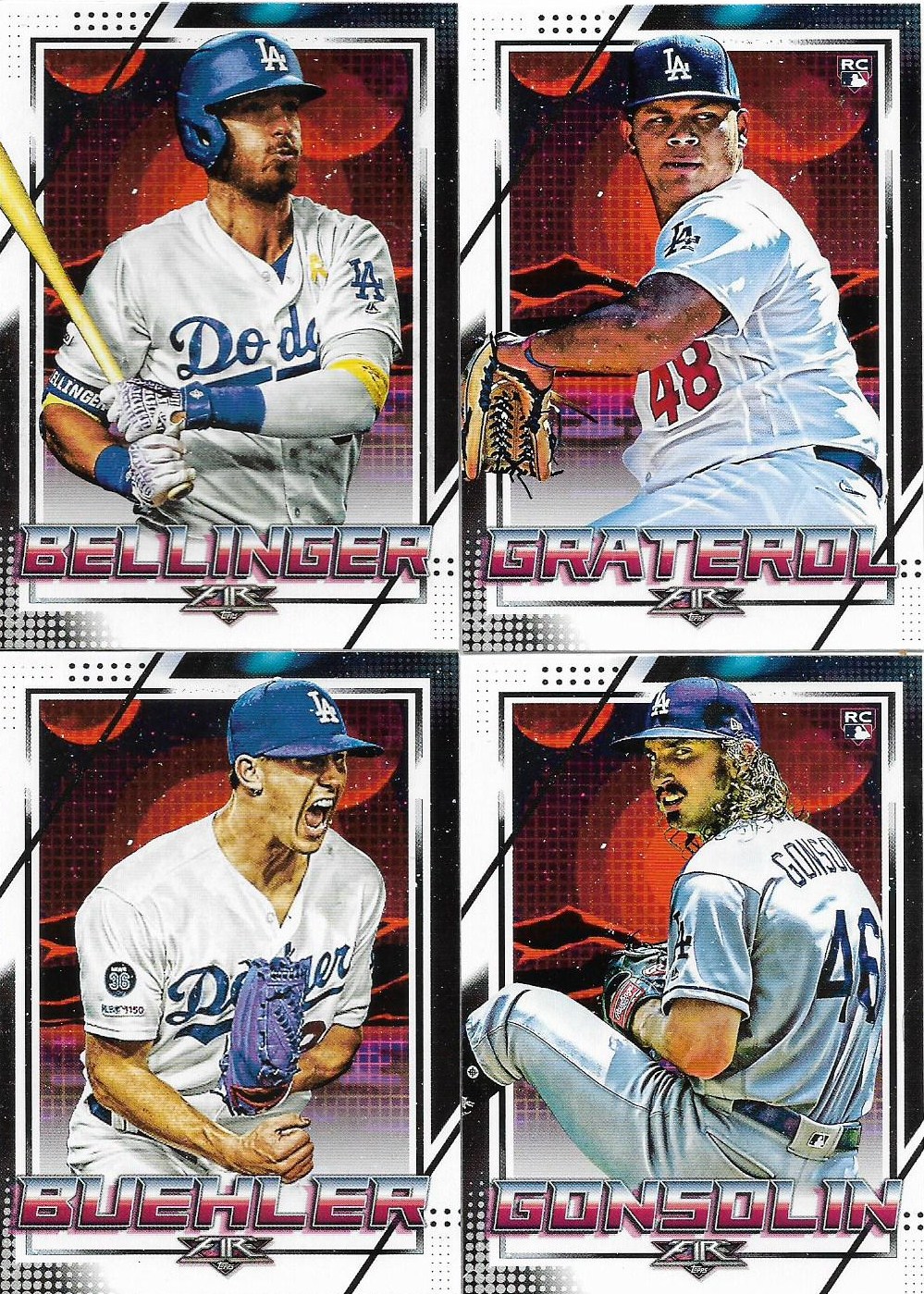 Also, Rod is a Padres fan who apparently (*mind blown*) requests the Dodgers during group breaks? I'm not 100 percent sure on this, just going by some random evidence I've rounded up. But I know there would never be a world in which I'd ask for the Padres in a group break (also because there's like 3 Padres per set).
So anyway, He sent me a bunch of 2020 Dodgers goodies, including what seems to be all of the Dodgers in 2020 Fire's 1980s video game design. Those are pretty cool. 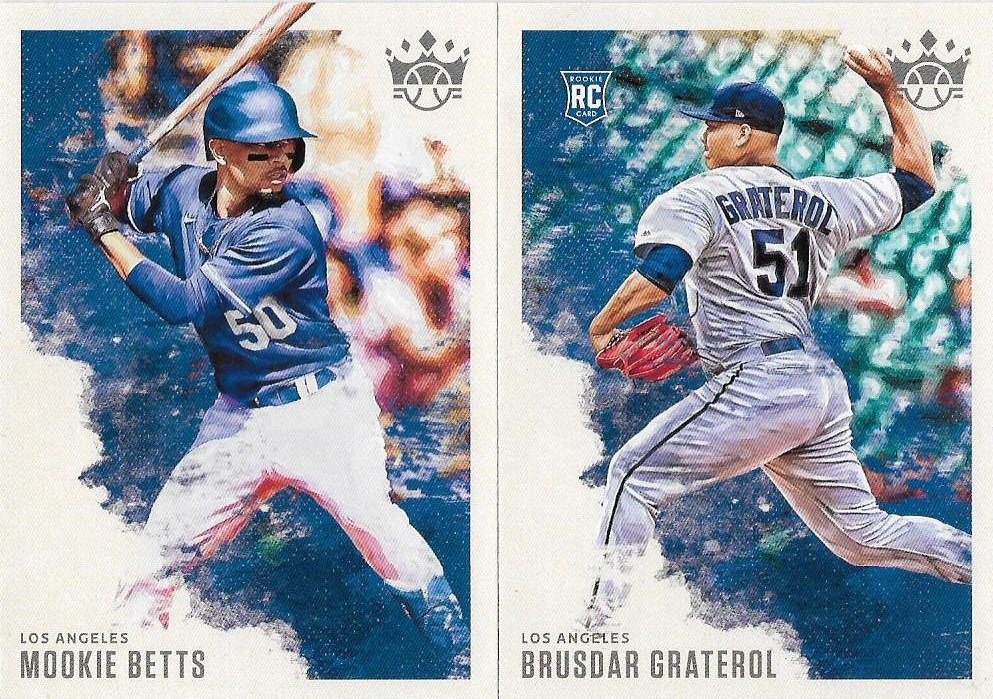 Here are the last Dodgers base set needs from 2020 Diamond Kings, both notable players in the Dodgers' win over the Padres. No wonder Rod wanted to get rid of these! 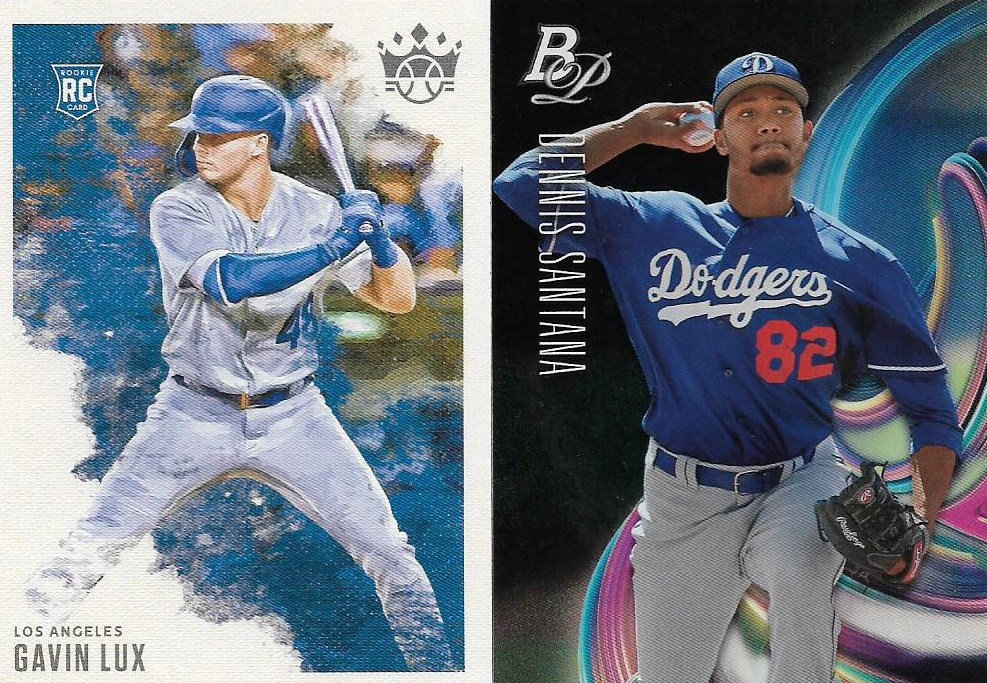 I positioned these two together because every modern collector knows frustration of having the parallel card but not the base card. In each case, base card now acquired! 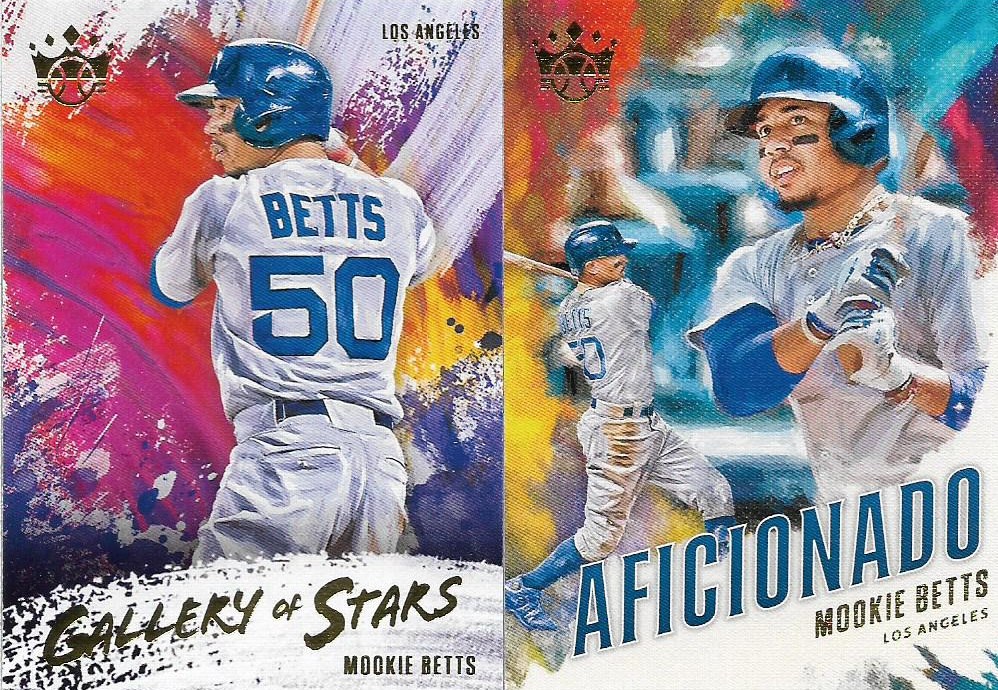 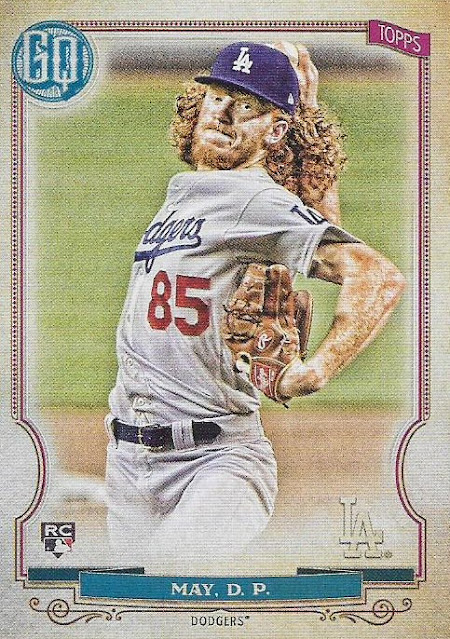 Slowly but surely acquiring the 2020 Gypsy Queen Dodgers card-by-card. I hope Dave Roberts lets Dustin May go more than one inning in his start in the NLCS. 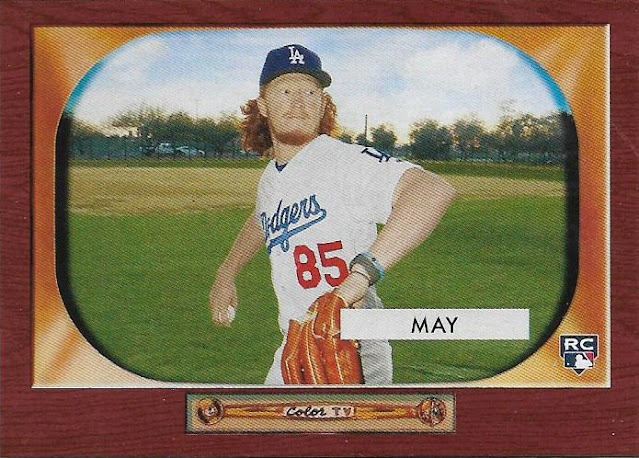 This is May on one of the inserts for 2020 Archives this year. It's the 1955 Bowman TV design.
I am now going to turn this card over so you can see the back. Please try to contain yourself: 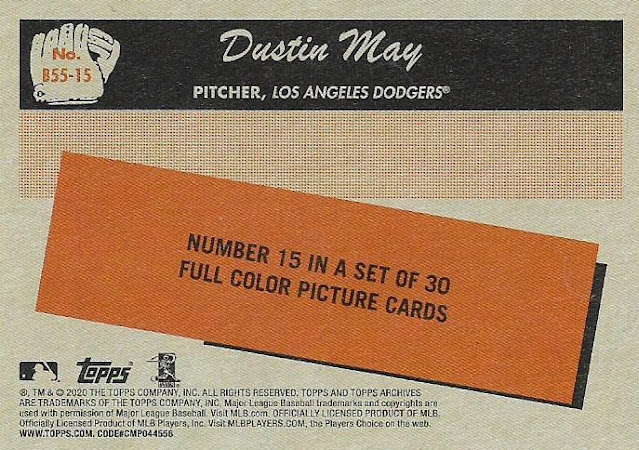 That is the entirety of the back. Gracious.
The abysmal card backs from Topps' online exclusives have now apparently infected the inserts in its retail products. If you want to know why I buy fewer modern cards, Topps, one reason that is currently soaring up the list is making me pay full price for half a card. 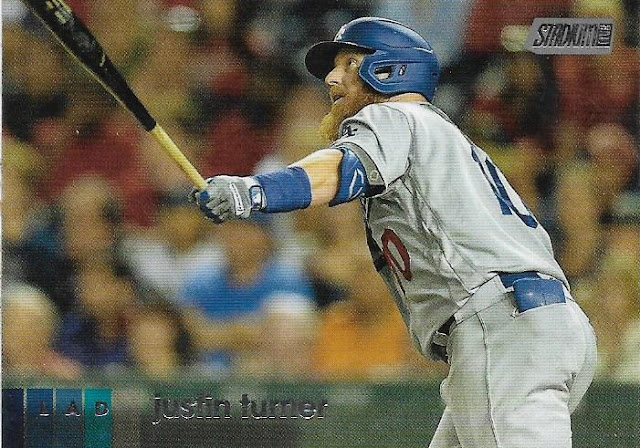 I landed the majority of the Dodgers' 2020 Stadium Club cards through a group break (still need Muncy and Betts), but Rod filled one of the cards that fell through in Justin Turner. The Dodgers certainly have their quota of redheads. 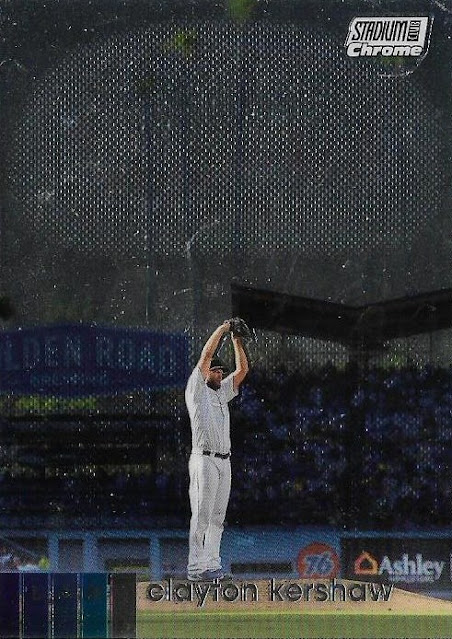 This is the chrome version of Clayton Kershaw's Stadium Club card. It doesn't scan well, but it's fancy, fancy. And, yes, Kershaw is wearing that horrible Players Weekend uniform from last year. Kinda takes the charm out of the card. 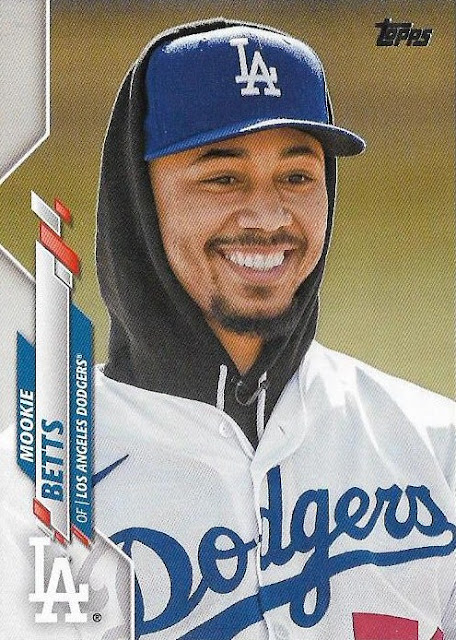 Weeeeee! A Mookie short-print!
Here's something that makes me want to meet a Padres fan in person and shake his hand! 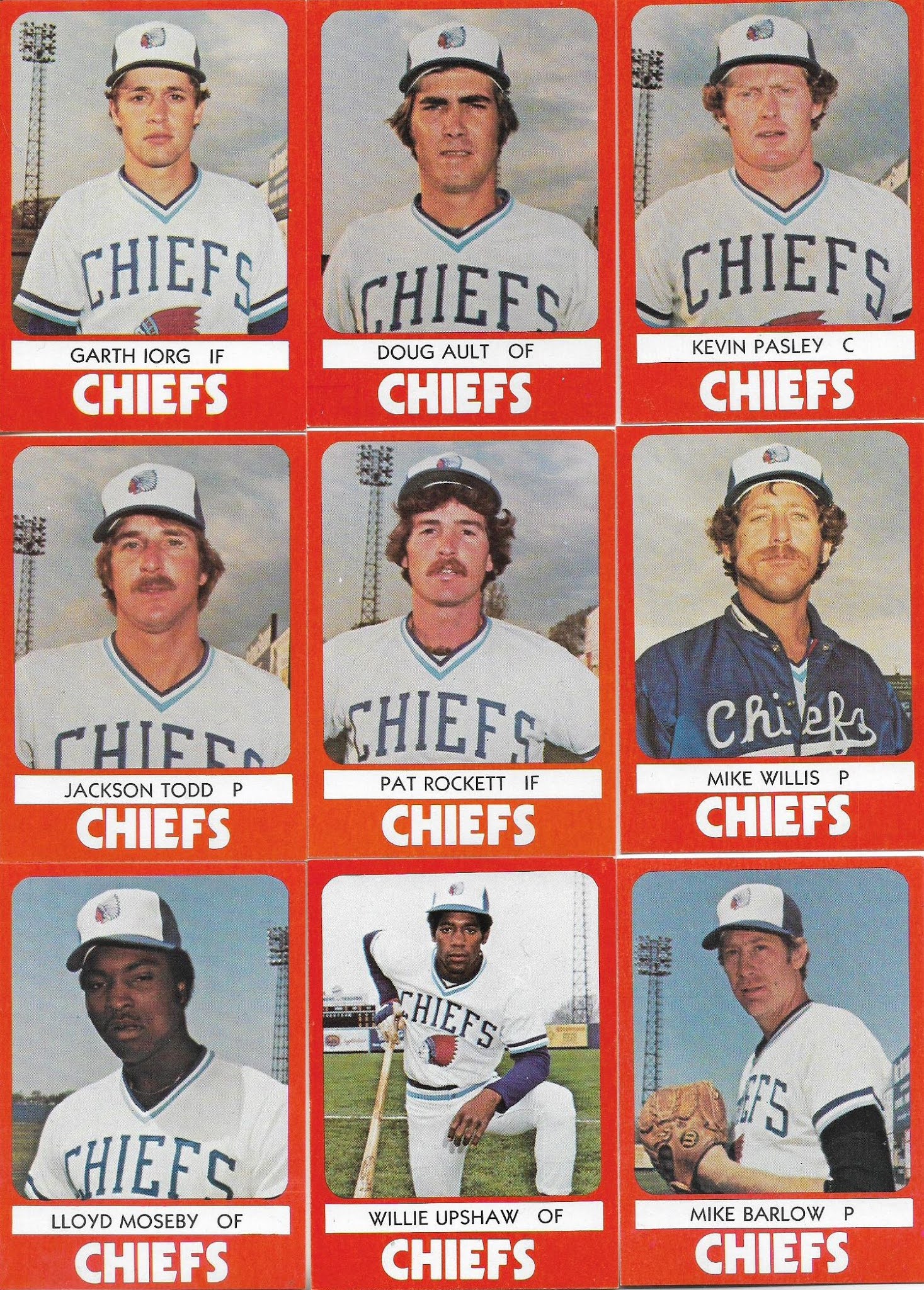 Rod even sent a bunch of 1980 TCMA Syracuse Chiefs cards. Very cool.
In fact, the whole set was in the package, except for the Danny Ainge card, which is far-and-away the most expensive card in the set. Not a problem for me, what do I want a basketball player for? 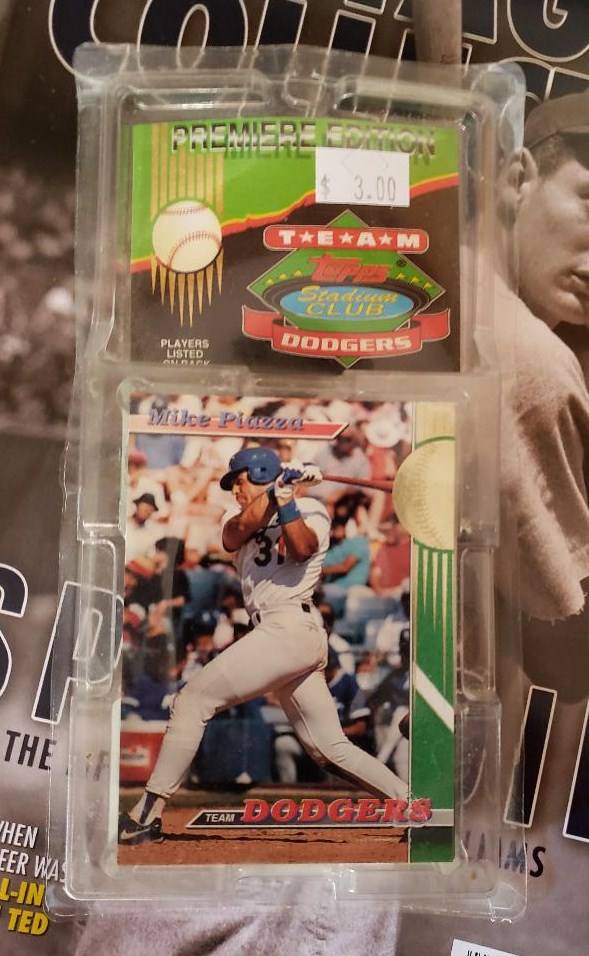 Rod also sent the entire 1993 Team Stadium Club Dodgers set completely packaged. I own all of these cards already, but this might make a nice display item if I can find room in the card room!
So that's quite the treat from a Padres fan, a person that for many years I didn't think even existed.
I still don't understand rooting for the Padres. I don't understand suddenly rooting for Manny Machado. I don't understand adoring those ugly Padres colors. I don't understand a manager named "Jayce" (sounds like the lead female character of a 1980s kids cartoon superhero show) nor that manager using a pitcher per inning.
But their fans sure do send nice baseball cards.

Nick Vossbrink said…
That 1955 Bowman is professionally embarrassing. I've been annoyed at the tendency for relics/autos to have useless backs which just state what's on the front of the card but at least those still serve as a certificate of authenticity of sorts. The online-only releases are clearly a "jam them out as fast as possible" cash grab. I don't excuse them there but I understand why it happens. But to do this in a retail product is inexcusably offensive to me as a designer.

The idea that someone created this and multiple people then signed off on it suggests that Topps is content to milk a cash cow and has zero professional pride in its products. Insultingly lazy and the kind of thing that makes me fear for its future in the business.
October 12, 2020 at 4:03 PM

Elliptical Man said…
Didn't you pick the Dodgers because they were good? Probably not the person who should be passing judgment on others' rooting choices.
October 12, 2020 at 4:25 PM

night owl said…
I picked the Dodgers because the first card I pulled out of a pack was a 1974 Topps Tommy John, not because they were good. I've mentioned it many times. Stay with me here. ... However, I do believe in following teams who have a habit of attempting to play well. The Padres have done that only some of the time.

bryan was here said…
I'm gonna come right out and say it, I'm a Padres fan living right here in Northeast Ohio. Thanks to the Interwebs, I can purchase their gear online, whereas before, I had to get lucky and stumble upon their stuff at an out of the way sports shop. I found a T shirt with the new logo in a shop in PA back in '85.

Love that '80 Syracuse team set. That was a pretty loaded set, besides the aforementioned Ainge, also has Willie Upshaw, Garth Iorg and Lloyd Moseby, three keys to those first really good Blue Jay clubs in the mid '80s.
October 12, 2020 at 5:15 PM

Matt said…
Down south of Buffalo, in the Southern Tier, there were Yankee fans of course, but also a lot of Indians fans, with a smattering of Pirates and Blue Jays fans mixed in. Those 3 cities were geographically closer than NYC, and of course all 3 teams used the Buffalo Bisons as their AAA affiliate at some point.
October 12, 2020 at 5:17 PM

David said…
My wife is from San Diego and claims to be a Padres fan. I asked her to name any current Padre but she could not. All-time, she could only come up with Tony Gwynn and, her favorite, Tim Flannery!

Another funny thing was when she learned that Steve Garvey was not always a Padre. She was distraught. Go Dodgers!!
October 12, 2020 at 8:34 PM

Nick said…
The stupid Players' Weekend uniform on the Kershaw really bugs me because that'd be an absolutely perfect card without it.
October 12, 2020 at 10:45 PM

bbcardz said…
I've lived in or near Los Angeles County my whole life and still have never seen a Padres fan in person--even at Dodgers vs. Padres games at Dodger Stadium.
October 12, 2020 at 11:38 PM

Fuji said…
Rooting for Machado isn't easy. Neither is supporting Jayce and the switching up pitchers faster than his dip. But ugly colors? Now you crossed the line.

On a more serious note... loved the story about the stuffed bear with the nasty personality. And I'm not really on Twitter, so I'm not sure who said the White Sox and Padres were two of the most fun teams in baseball this year... but I like him. I didn't watch any White Sox games, but I always looked at their box scores. Oh yeah... and one more thing. Go Padres!
October 13, 2020 at 7:40 PM