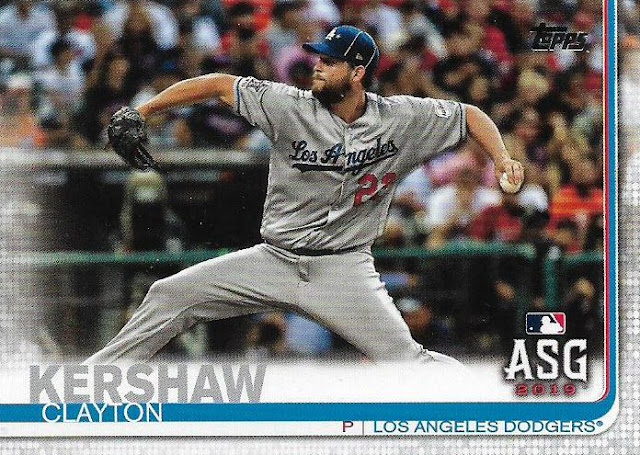 Soon, probably before the year is out, I will have added the 700th different Clayton Kershaw card to my collection.

No, no, please, don't applaud. No, really, it isn't necessary.

I'll probably make a big deal about card No. 700, or at least make an announcement. But my heart won't be in it.

This is why I am a set-collector, or at least why I am much more interested in set collecting than player collecting. Set collecting, the actual completion of a large set of hundreds and hundreds of cards, feels like more of an accomplishment than announcing the accumulation of a round number of cards of a certain player. I feel more accomplished when I add that last card into that last slot.

It involves searching for the right card, not just any card with that player's face.

So that's why I am trying to complete many different sets right now, because I need that rush that I just won't get by announcing that a certain card in the near future is my 700th Clayton Kershaw card. (I'm not saying player collecting doesn't contain thrills all its own, I'm just saying it doesn't work for me).

Anyway, the card above is the 689th Kershaw card in my collection. It came from Adam of ARPSmith's Sportscard Obsession. He sent a bunch of 2019 Update Dodgers, including a visual aid for what I just wrote above. 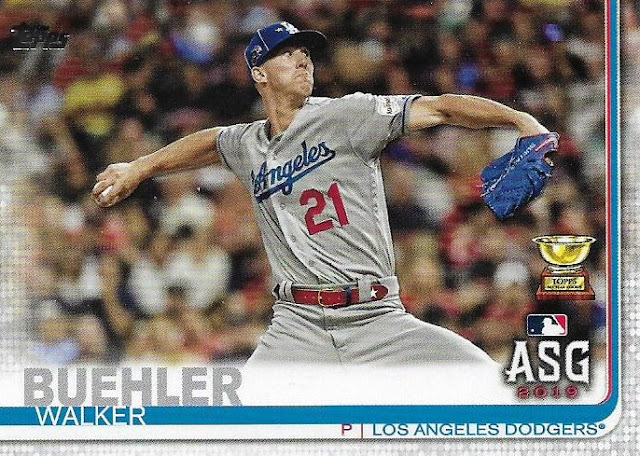 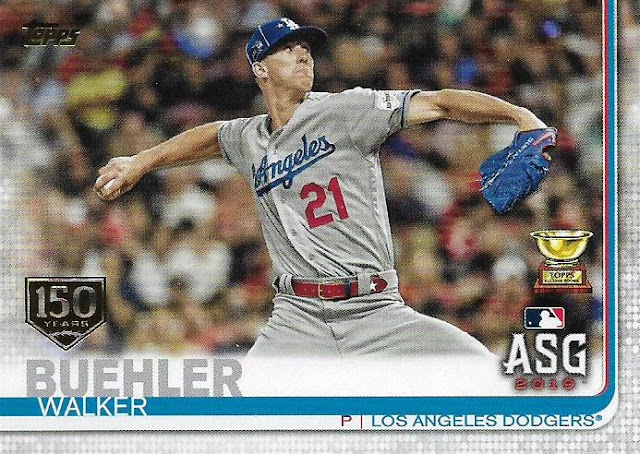 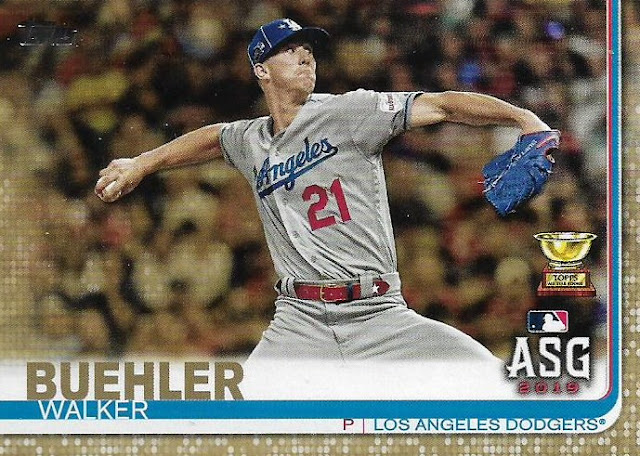 By the way, I'm up to 66 cards of Buehler, who's been in the league for barely more than two years.

But you all know that. Bloat is all over the modern hobby and especially Topps Update. Let's see some more Update cards from Adam: 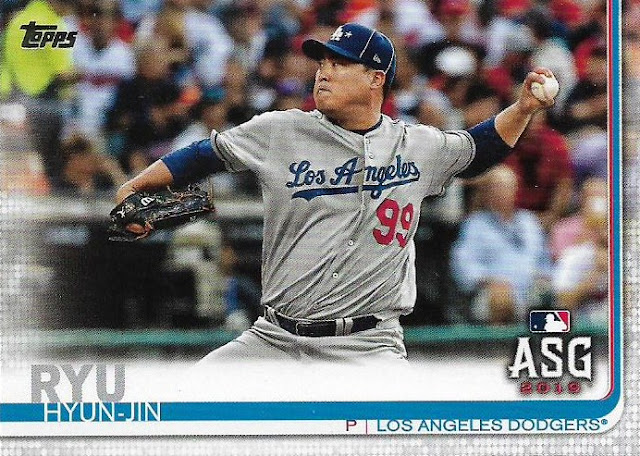 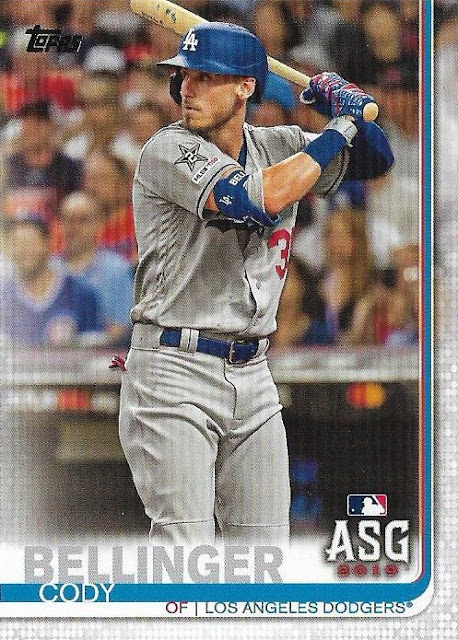 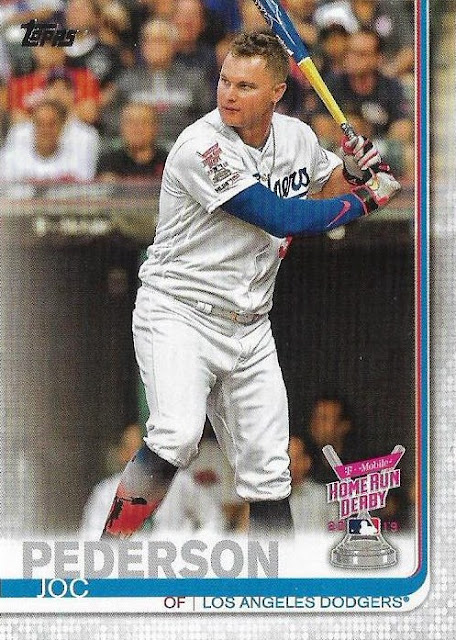 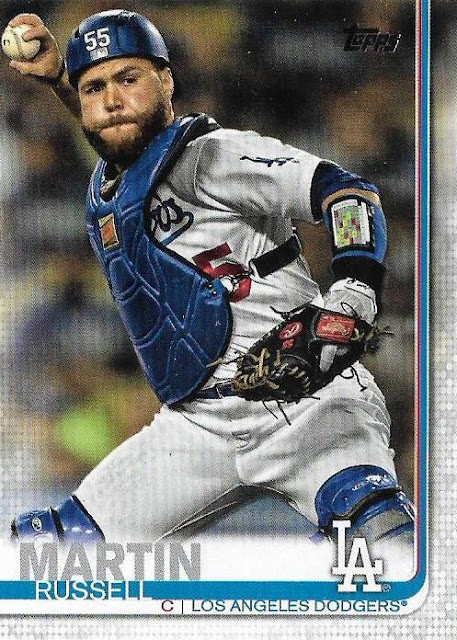 Out of all the Update cards that Adam sent, I'm the most interested in the Russell Martin card because that's what means the most to me from Update -- players featured with their new teams (or in Martin's case, his old team, too). All the rest is just filler. Especially those Home Run Derby cards.

I sure do appreciate someone sending me a 2019 Topps Bellinger card, though. Still trying to get that Series 2 Bellinger!

Adam also sent a few needs from some other sets. 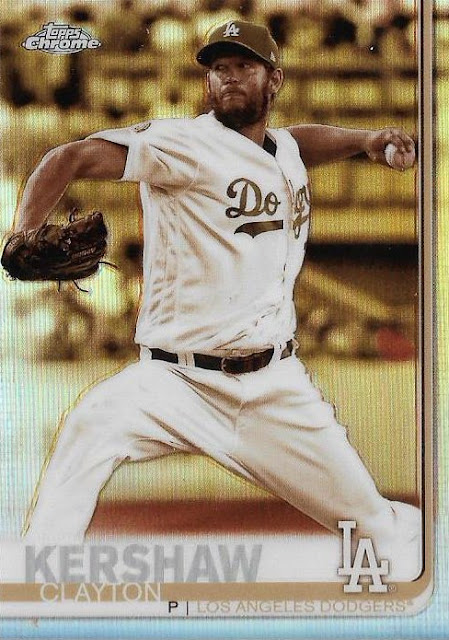 Here is Kershaw card No. 690. A sepia parallel.

His fly is still zipped as it is on his regular Chrome card. You may think, "well, of course it is." But that means you haven't seen the disaster that is Kershaw's 2019 Topps Holiday cards, which show flies zipped or unzipped depending on -- I don't know, what? -- whether they hired the 1989 Fleer employees who worked on the Billy Ripken F-face card? Geez. 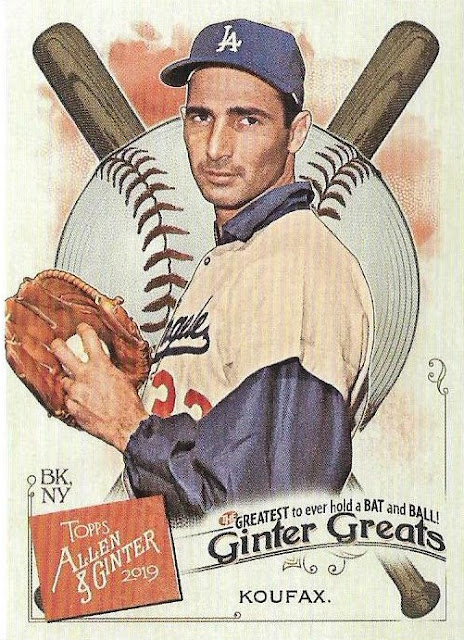 Moving on to Legends Bloat. this is a need from 2019 A&G, the Ginter Greats insert set, not to be confused with the Star Signs insert set, which also includes Sandy Koufax.

Unrelated to anything, I now have 206 cards of Koufax, all but 25 issued after his career ended. Even with Koufax, I've reached the mere accumulation stage. 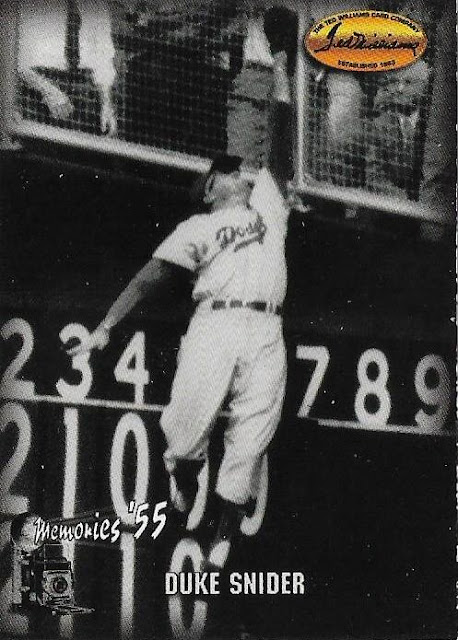 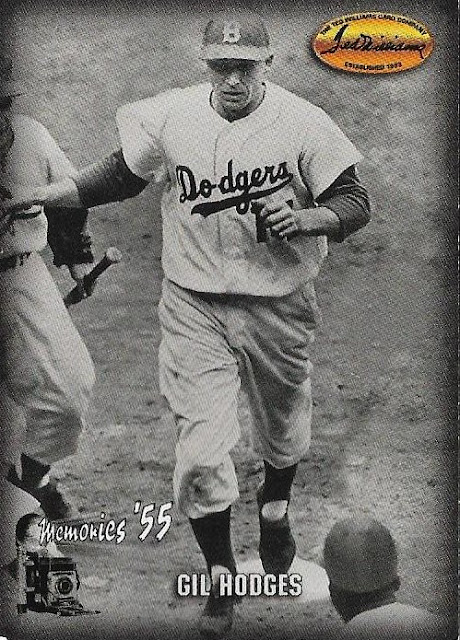 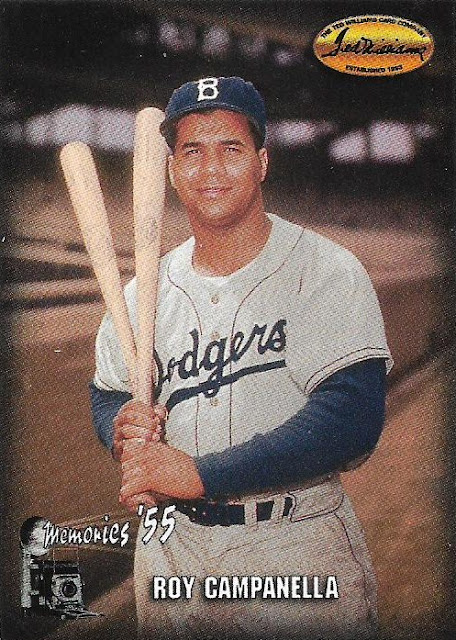 Now we are talking.

It's been quite awhile since I've done anything with my needs from the 93-94 Ted Williams Card Company sets. All of these are from the the 1993 Memories insert set. For the Dodgers in that insert set I need two of each card, since I'm collecting one for my team set needs and one for the actual set.

Check out how large the "B" is on the hats. Gracious.

Instinctively, I felt a rush of satisfaction with those Ted Williams Co. cards that I didn't feel with the Update cards.

Sure, I still want the Update team needs. I always must have my Dodgers, but it underlines how I'm wired.

I want completion over mere accumulation.

Zippy Zappy said…
"Say, maybe 700 different cards of Matt Lawton. I'd be kinda awed by that."

Well it's not quite that but I do have 137 different Luis Torrens cards (not including customs). But yes, I echo your feelings of how cards are merely meant to be consumed and accumulated now more than anything else.
November 5, 2019 at 8:51 PM

Fuji said…
I've been in accumulation mode since the 80's. Growing up in that era brainwashed me as a collector. At least you don't have the desire to accumulate multiples. A few weeks ago, I bought 8 copies of the same Ronald Acuna card. It sounds silly saying it... and it looks even sillier typing it out.
November 6, 2019 at 8:57 AM

David said…
From 1996 to about 2007, I worked on a PC of a favorite player from the late '80s: Wally Joyner. Not quite Lawton-esque but not a superstar either. More than crazy fanhood, I did it more to sample the broad universe of sets, inserts, and parallels of the late '80s and '90s with a thin slice. My collection of Joyners stands at 606 different. I've identified 77 more that I do not have but the collecting drive has waned. It may stay at 606 for a long time!
November 6, 2019 at 9:56 AM

GCA said…
I kinda feel that way about the new flagship sets. I dutifully build the base and whatever inserts and then never look at them again except to add the final few inserts that elude me annually.
Sets are better for completion, but player collections are better for diversity. Like David above, I started Willie Jones to sample more of the 50's era stuff without having to pay Mickey Mantle prices. The trick is limiting yourself to a finite list, excluding those rare regional issues or anything serial numbered to less than 10.
Yeah, Fuji ~ that is crazy....