It only took 8 years 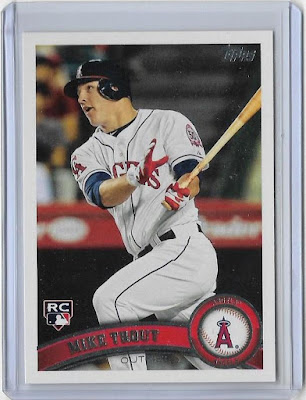 That is my Mike Trout rookie card. Most days it sits under lock-and-key because I just know there are thieves lurking in the bushes so they can steal it from me.

Even when I pull it out for blog occasions like this one, I don't like scanning it outside of its top-loader. I'd do it if I had to -- I don't care about it that much -- but all it will take is one trip to ebay to see how much it is selling for and I suddenly feel like hiring armed guards.

My goal is to sell this card someday and I probably would have sold it already, but I've held on to it because I wasn't done with the 2011 Topps Update set yet.

No, I haven't completed the 2011 Update set -- no plans to do that -- but there was one card from that set that I wanted above any other one and it took ages for me to get it.

The Matt Kemp Toppstown card from that set lounged on my Nebulous 9 list longer than any other card that I've placed on there. But if you look over at the Nebulous 9 now, you'll notice that it's not there anymore. 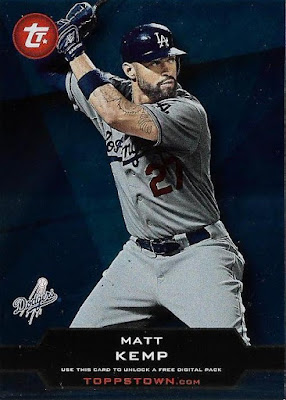 Because, finally, it's mine.

I received it from Gavin of Baseball Card Breakdown. He went out of his way to track down a copy of it because -- in his words -- he "got sick of seeing this card on your Nebulous 9 forever."

I hear ya, Gavin. Imagine how I felt!

For the record, the Kemp Toppstown card didn't sit on the list forever. It's been up there for around 2 1/2 years. I went to the Wayback Machine and noted that the Kemp card was not on my Nebulous 9 in April of 2016: 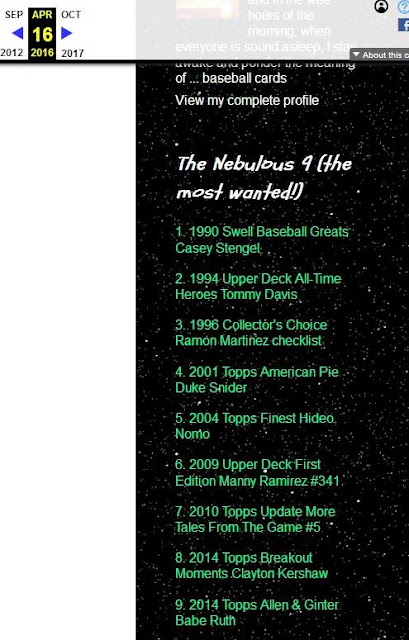 (If you want to feel good about your collection, find a past want list like this and note that all of the cards are now in your possession!)

Another trip to the Wayback Machine revealed that the Kemp card was appearing on the Nebulous 9 list by December of 2017.

The reason such a ridiculous card (the Toppstown site doesn't exist anymore) eluded me for so long is partly because I didn't feel like chasing down a dumb Toppstown card, but mostly it's because it wasn't available because everyone in the world is hoarding 2011 Topps Update cards.

It's interesting to me to see the development of 2011 Topps Update from a run-of-the-mill set to the most coveted Update set of the last decade. I remember buying Topps Update in 2011 -- you can read about it on this blog -- and I had no difficulty pulling the Trout card or any of the many rookie notables in the set, Altuve, Freeman, Blackmon, Hosmer, Rizzo, Goldschmidt, Sale, J.D. Martinez, etc. The cards were plentiful on the shelves and I accumulated a little more than half the set.

I never even bothered to show the Trout rookie card when I pulled it because I'm sure I didn't know who he was.

But slowly, as Trout's rise to Baseball God became complete, the 2011 Update set became less and less available and prices for any card in the set, even a stupid Toppstown card (albeit a card of the rightful 2011 NL MVP), rose.

This phenomenon has interested me because 2011 Update was never difficult to find. It's not like 1984 Fleer Update or any set that was known to be released in fewer quantities or in exclusive fashion (such as factory set only). Yet, you will pay if you want to own it.

And even if you want one lousy Toppstown card from it, you will be inconvenienced. I pulled the other Dodger in the Toppstown set in Update, Chad Billingsley, back in 2011. Finally -- eight years later -- Matt Kemp has joined him. In that time, Billingsley's career ended and Kemp went to the Padres, then the Braves, then back to the Dodgers, then the Reds.

Also, Toppstown cards scan like crap, so here is a photo of the card to take in its shininess. 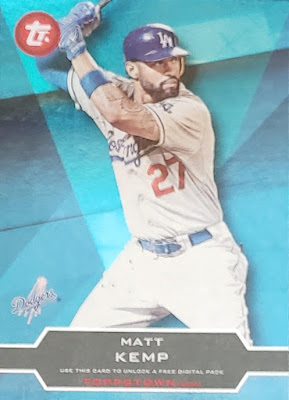 But now I am done with the 2011 Update set. There are no other cards I want from that set.

That's good. Because if I do decide I want any, I might have to fund them by selling my Mike Trout rookie.

Chris said…
Congrats on finally crossing the Kemp off your list (Good on ya, Gav!) I remember buying a bunch of 2011 Update and accumulating about 2/3 of the set - but I never pulled the Trout. Once that card starting selling for triple digits I sold/traded most of them, except the Rizzo RC and maybe one or two others.

Tony Burbs said…
I've been trying to chase down a base rookie of backup catcher Chris Gimenez from 2011 Update for over a year now and I was astounded as to how difficult the search had become. I'd forgotten that Trout's rookie card was in that set, seeing as I don't set collect, pursue Angels, or chase major rookies. It all makes sense now though...
July 1, 2019 at 4:50 PM

Fuji said…
Wow. Never heard of the Wayback Machine until today. That is pretty awesome! But I gotta admit... that Trout of yours is even awesomer! That's one of the cards I'll always want... but will never fork out the cash to actually own.
July 1, 2019 at 8:28 PM

BaseSetCalling said…
I looked for that Kemp in my stack a couple different times. One of the few I didn't pull, as I bought a lot of discounted '11 Update.

On that Trout card - the bad news - it might soon cost $65 to get one graded.

The good news - that's because PSA 10s have started crossing $1000 in value I believe, and the grading fee is based on avg. value of card.