Round, hard things you can't spend or eat 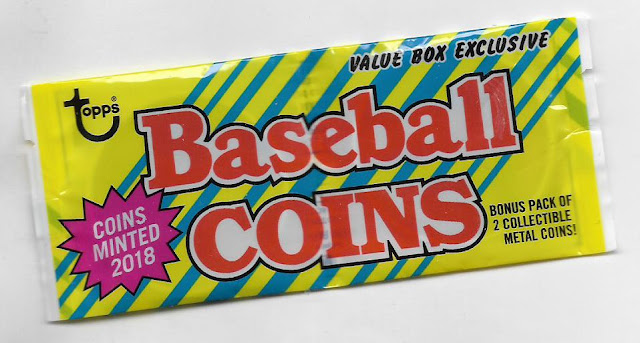 I haven't had much time for card stuff lately and during a brief break in the action yesterday (i.e. someone I needed to interview stiffed me), I decided to stop by Target and buy some cards just to prove I still could.

I wound up with a blaster of last year's Archives, which ideally would be fun. But I've finished off almost all the Dodgers and I'm not trying to complete the set so this was purely a mad money purchase.

Also, when I opened the blaster it occurred to me why I avoided Archives blasters last year:

1. Those blasted Sandlot cards. I'm about 1 of 2 bloggers who doesn't appreciate that movie and there is no reason for me to have the cards. I ended up with one of the cards -- don't ask me who it was, it wasn't the girl or the guy in the Dodgers hat.

The coins are an exclusive to the blasters.

I've never gotten into collectible coins. I have several of the '60s ones but that's because they're from the '60s and everything made back then is cool. But the '80s coins just clutter up the place. I can't spend them or eat them so what is the point?

I end up throwing them in a box where they clink around, annoying me. I should really store them in pages like I have with the '80s baseball pins, but I need to get myself to care first.

Also, I don't like how they tend to rust when they get older. I feel like I'll get tetanus. That's mostly because of my mom freaking me out about stepping on rusty nails when I was a kid but it's still very real.

Anyway, I just opened the package here on my limited dinner break and these are the results: 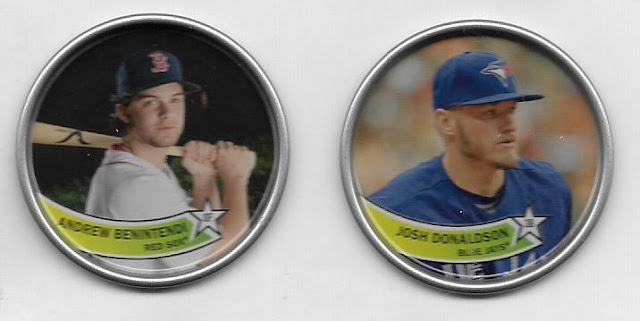 OK. That's enough of that.

Billy Kingsley said…
Those aren't even coins. They are medals. To be a coin it needs to be created by a government or a licensed agency and created with the purpose of facilitating commerce.
April 6, 2019 at 12:18 AM

JediJeff said…
"I'm about 1 of 2 bloggers who doesn't appreciate that movie and there is no reason for me to have the cards."

Laurens said…
I saw that movie once with family at a budget movie theater that cost $1.75 to get in - I liked it enough at the time, but I can't really recall anything but the basics.
April 6, 2019 at 4:13 AM

Jeremya1um said…
I also don’t care for coins. Why waste space in a box. That could’ve been another pack.
I think MLB network constantly playing The Sandlot kind of ruined the charm of the movie for me.
April 6, 2019 at 4:54 AM

Mark Hoyle said…
I binder the coins . There’s quite a few issues over the yrs. I went to a coin shop got the coin holders they slide right in a page
April 6, 2019 at 7:56 AM

Fuji said…
A few days ago, I was talking to my brother and he was telling me that a lot of people don't bother showing up to interviews these days. Like no phone call or anything. I was pretty blown away. I can't even imagine lining up a job interview and then blowing it off like it was nothing, but he says it's a pretty common thing nowadays. That being said... it still annoys the heck out of him.
April 6, 2019 at 10:28 AM

Bulldog said…
I'm definitely in the the no coin camp. I pulled a Trout with mine last year but couldn't even get excited about it.
April 6, 2019 at 10:54 AM

night owl said…
I was referring to interviewing for a story, but I suppose on the good side for your brother not showing up for a job interview helps weed out who not to hire.
April 6, 2019 at 11:33 AM

Brett Alan said…
Same here. I didn't remember its existence at all until these cards were announced. I think I was too old for it.
April 6, 2019 at 11:49 AM

Henry Blanchette said…
I'm in full agreement with you about the Sandlot cards. As for the coins, I'm a pretty big fan of those.
April 6, 2019 at 5:39 PM

Baltmoss68 said…
Never really cared for the movie and avoid the cards. One of the few times I find an insert silly. That said, I like the Major League set. Go figure!
April 7, 2019 at 6:36 PM