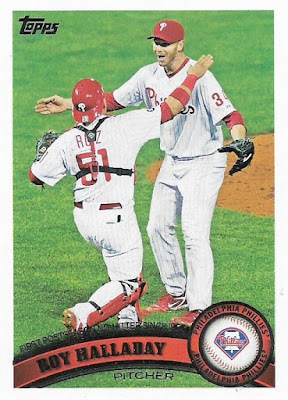 My spreadsheet says I have 45 cards of Roy Halladay. That sounds about right for a modern player who I didn't pay much attention to when he was playing.

That's why I don't feel qualified to write a tribute to Halladay after the news yesterday of his death in a plane crash at age 40. I'm not a fan of the Blue Jays or Phillies. I knew that he was very good when he was playing but didn't watch many of his games.

So I'm just going to stick to baseball cards. Of those 45 cards of Halladay, most are part of sets that I have completed or like quite a bit. I've probably traded off any of the other Halladays.

While going through the cards I have of him, I realized that he is in just about every set that has had meaning to me over the last dozen years. 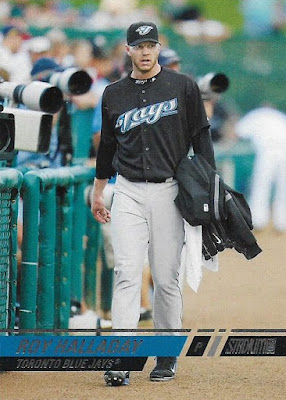 This was a card that fell out of just about every pack of 2008 Stadium Club. The collation of that set sucked in a variety of ways and shame on it for making me grow tired of this card. 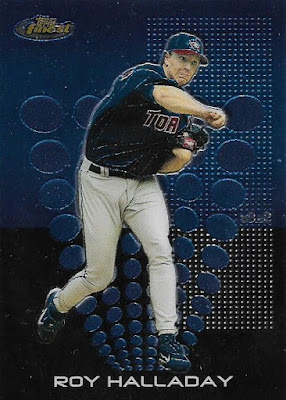 Even though you can find Halladay cards from the late 1990s, his 2004 Finest card is the earliest one I have of him. This is my favorite Finest set of all-time. 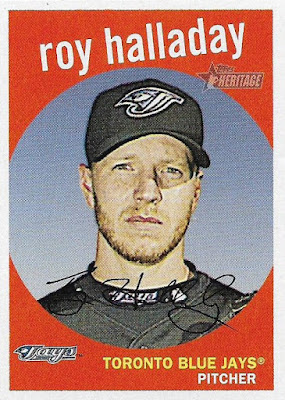 Halladay is part of my long dormant quest to complete the 2008 Topps Heritage set. 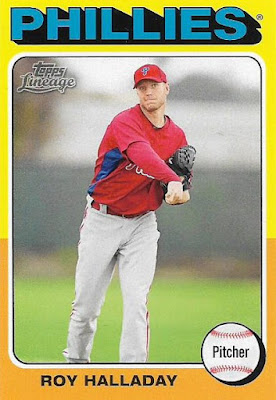 He resides in my complete set of 2011 Topps Lineage '75-style minis. 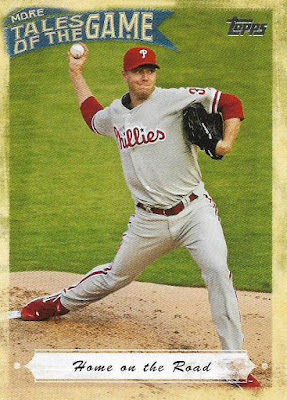 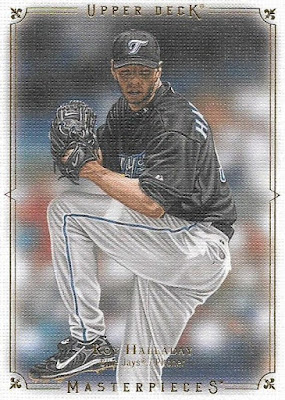 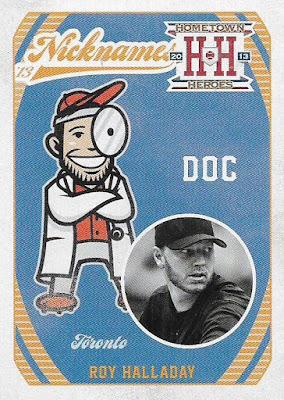 And part of the best insert set in the HH set. 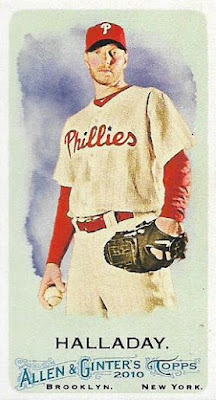 Halladay is even part of set of my very own. He's card No. 96 in my Allen and Ginter mini frankenset.

Halladay's cards never seemed all that interesting to me. Maybe it was the emotionless way he went about his business or the fact that relatively few cards brought out how tall a 6-foot-6 player looks out there on the mound (there are a couple cards that emphasize his height).

The only card of his that struck a cord with me is one I've shown many times on this blog. 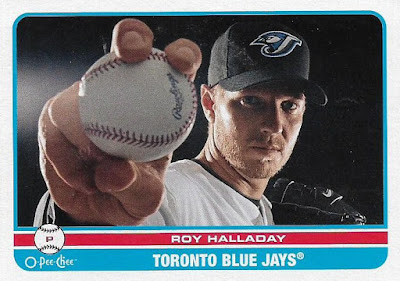 It's his 2009 Upper Deck O-Pee-Chee card. Yet another recent set including Halladay that I completed and enjoy quite a bit. It was part of my recently retired Night Owl Cards header for at least five years.

Of course, now, this card looks like an "in memoriam" version of the base card.

And that's because Halladay was so good that he belonged. He belonged in every damn set. You wouldn't even think of overlooking him. Even in these days of abbreviated sets, half the size that they were when I was collecting as a kid, Halladay was always there.

Think of any baseball conversation that you want to have about the best. Halladay belongs in all of those, too. And he belongs in the Hall of Fame.

It's too bad this is the very first time on this blog that the name "Roy Halladay" will appear in the labels of one of my posts. I'm not sure why it took that long.

Maybe I'll have to bring that old blog header back.

BobWalkthePlank said…
I agree about 2004 Finest, but I like just about every version of that set. The price point is just too high to ever purchase a box.