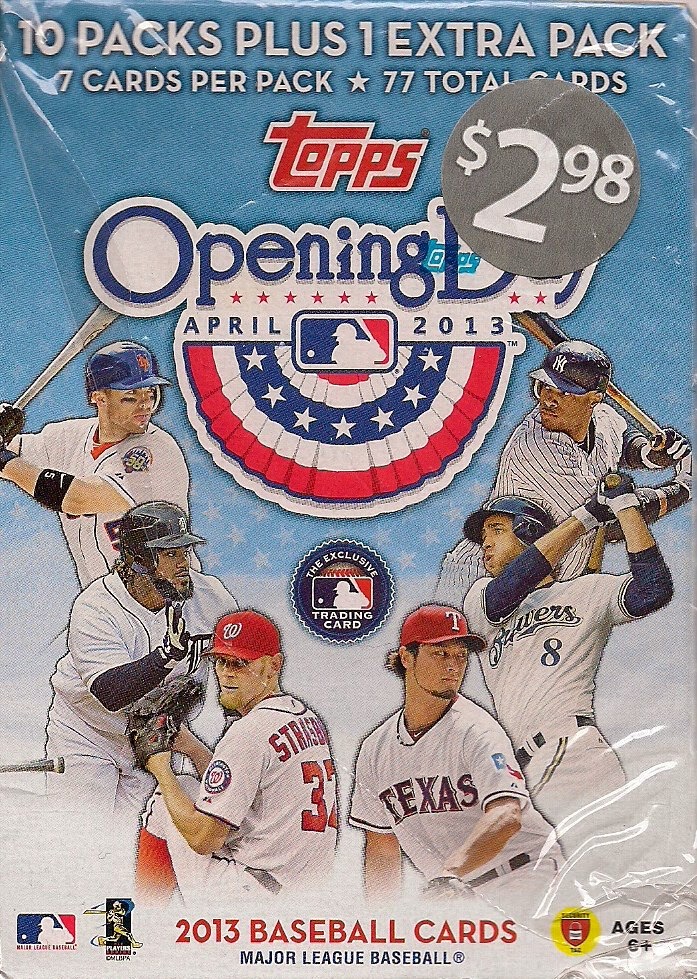 So, I was back at Walmart early, early, early Sunday morning -- 2:30 a.m. to be exact -- to finish up Mother's Day shopping. Yeah, sometimes I'm a last-minute guy.

Even for 2:30 a.m., the store was beyond dead. Just a couple customers, and some workers. Everyone must've been getting their beauty sleep because mom likes to get up with the roosters. I wandered around that vacant store like a king in an unfamiliar castle and after several disorienting passes through departments that I never wish to enter again, I staggered through the card aisle and saw something new.

There were three shelves of cardboard bins, stuffed with what I would call "modern party favors." It was a bunch of kid stuff priced very low that I think was probably put there for moms to pick up cheap for birthday party prizes.

Mixed among the items were -- lo, and behold, baseball cards.

Shaking out of my Mother's Day shopping haze, I grabbed one of these: 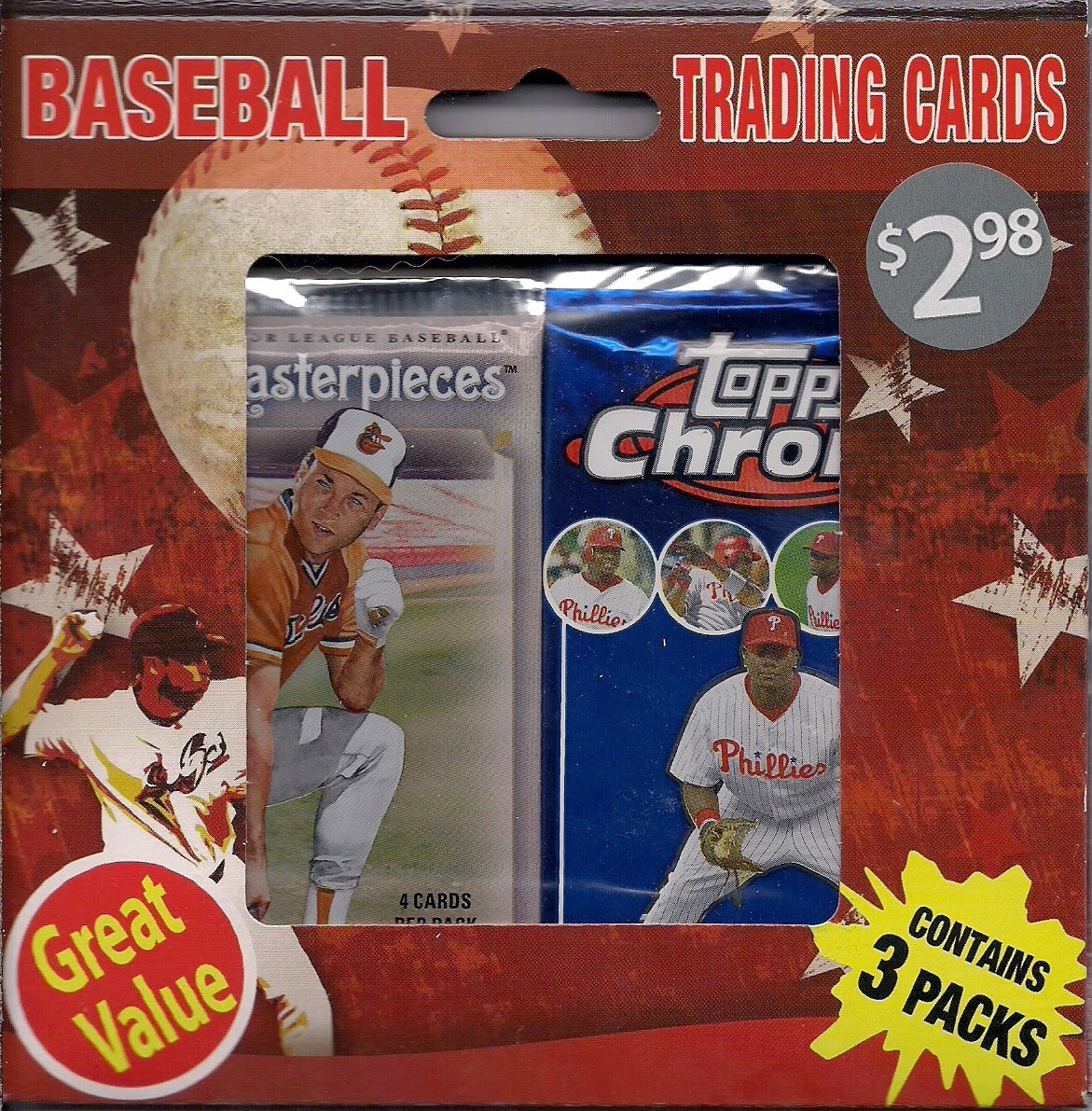 And I grabbed one of these:

I think sometimes 2007 Topps gets a bad rap. There were a ton of these, by the way.

There were also Upper Deck boxes for $2.98. Probably from 2008, because those things are everywhere. I ignored them.

Then I shifted my eyes over to the right and saw what you saw at the top of the post.

Stunned, I grabbed one box. Yeah, I know -- only one. But I'd been in that store for far too long and I still had to set up the Mother's Day Presentation and, good god, MOM GETS UP WITH THE ROOSTERS!

I vowed to myself that I'd return to Walmart the following night.

And this is what I got: 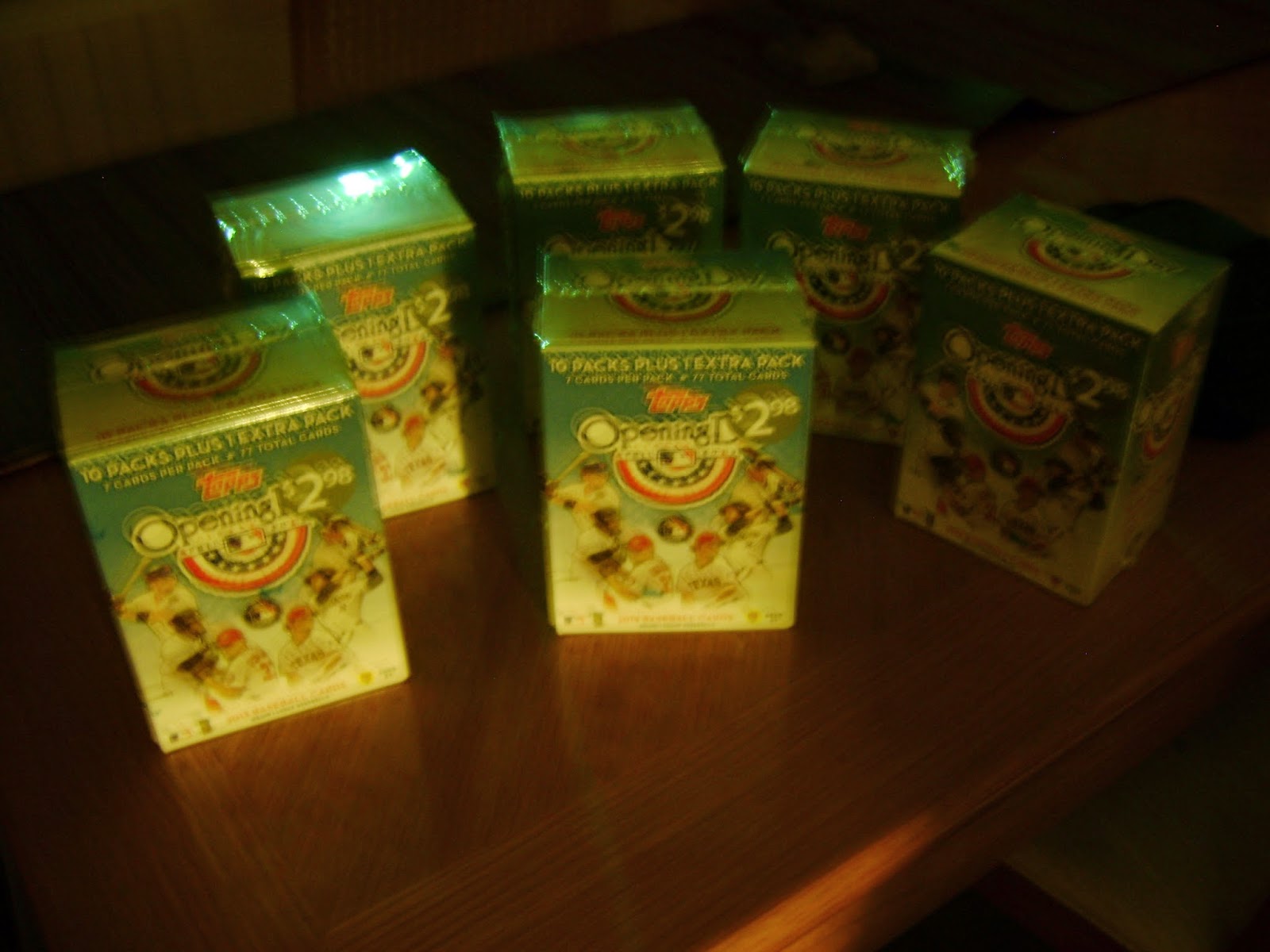 That's what photos look like when you take them at 3 a.m., by the way.

Now, I've bagged on Opening Day in the past. I'm one of those guys that doesn't really understand why it exists. The inserts are nice and all, but I rarely buy much of it.

However, ignoring $2.98 blasters is not in my nature. I wouldn't think it's in the nature of any card collector.

This afternoon, in what is a very busy day, I opened up all the boxes.

Here is the loot: 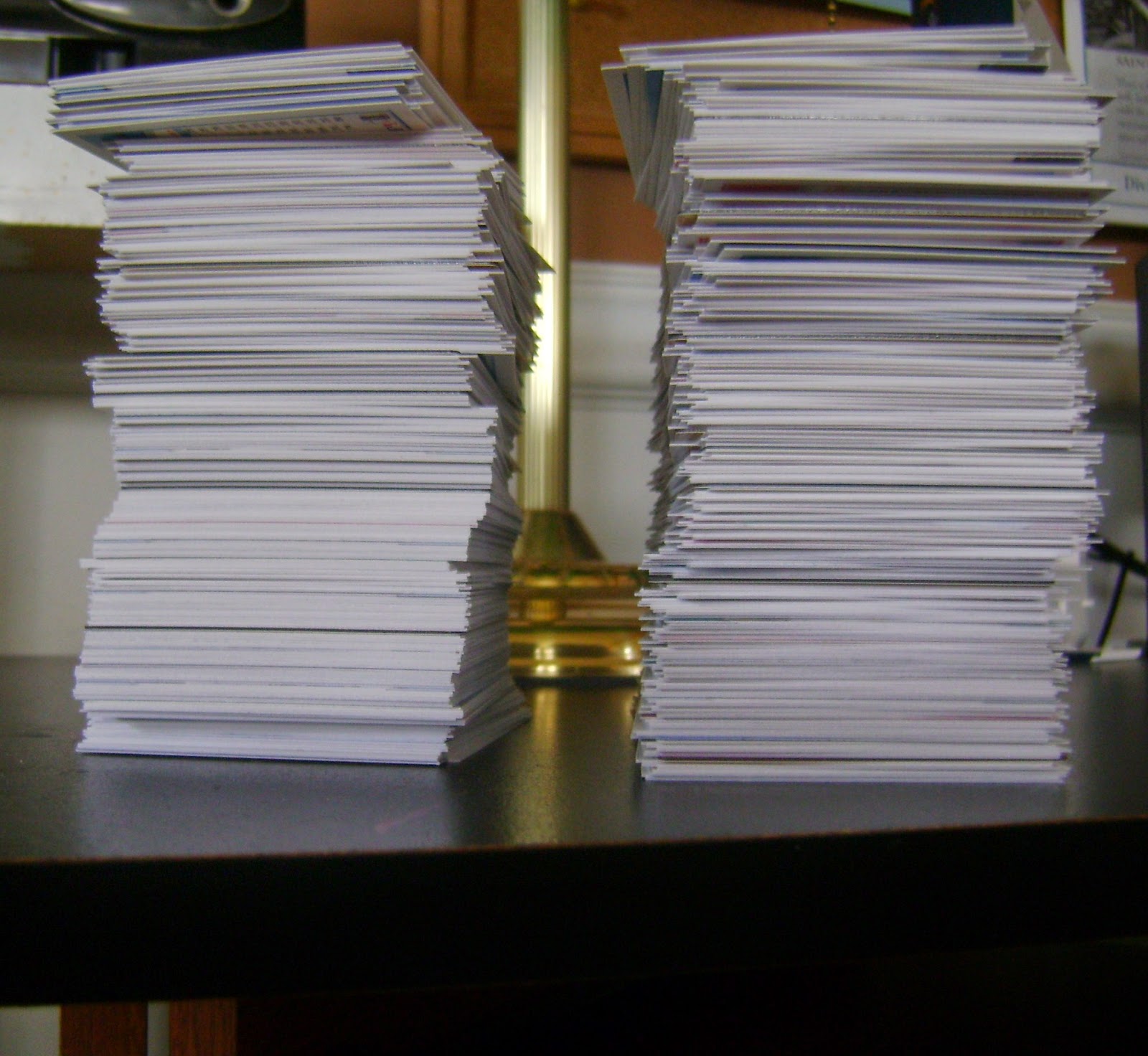 I haven't had a chance to go through the thing and see if I have the entire set. (Probably not as I don't remember seeing a Kershaw card in there).

But I did pull out the inserts and I now present them for you to see. 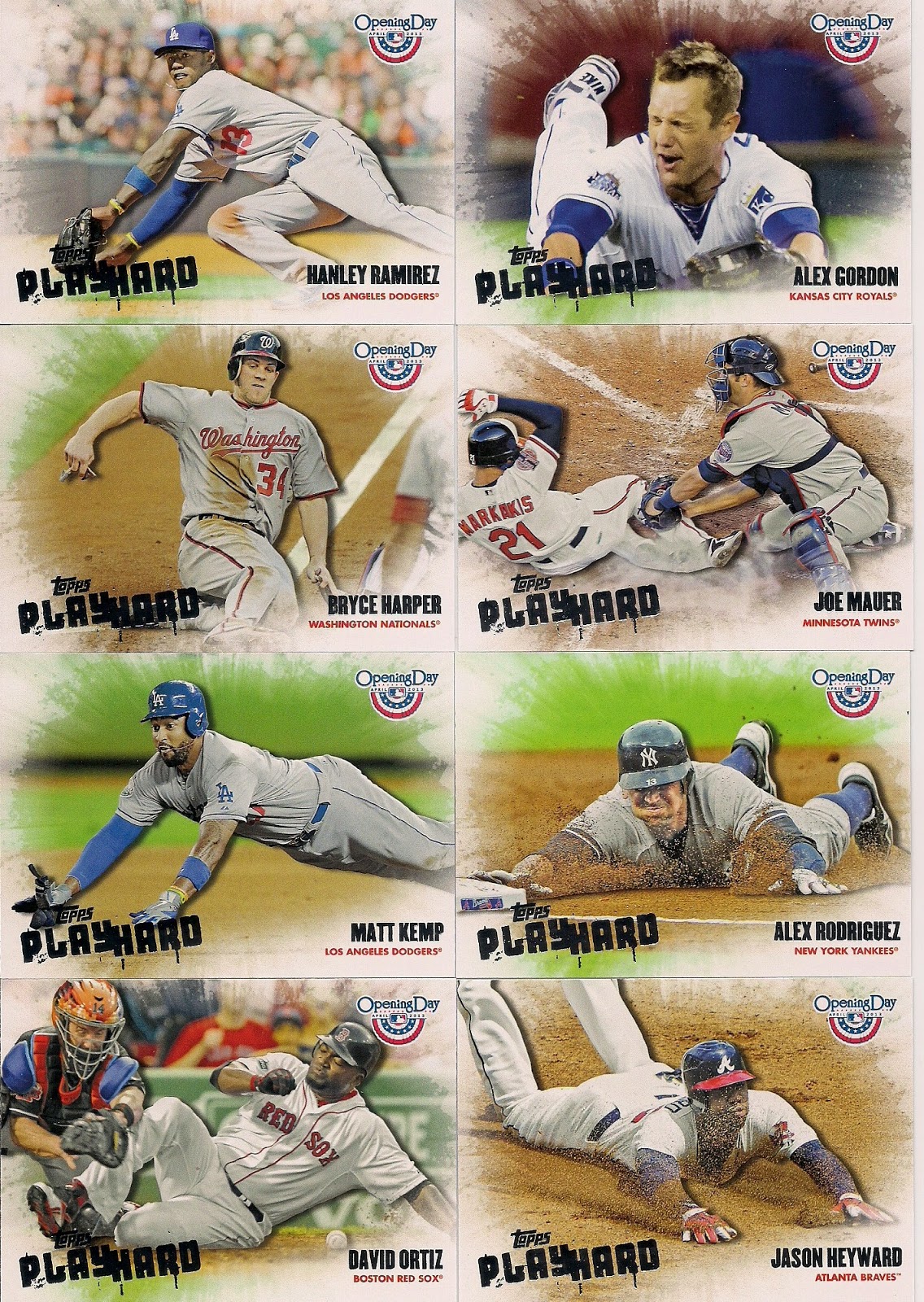 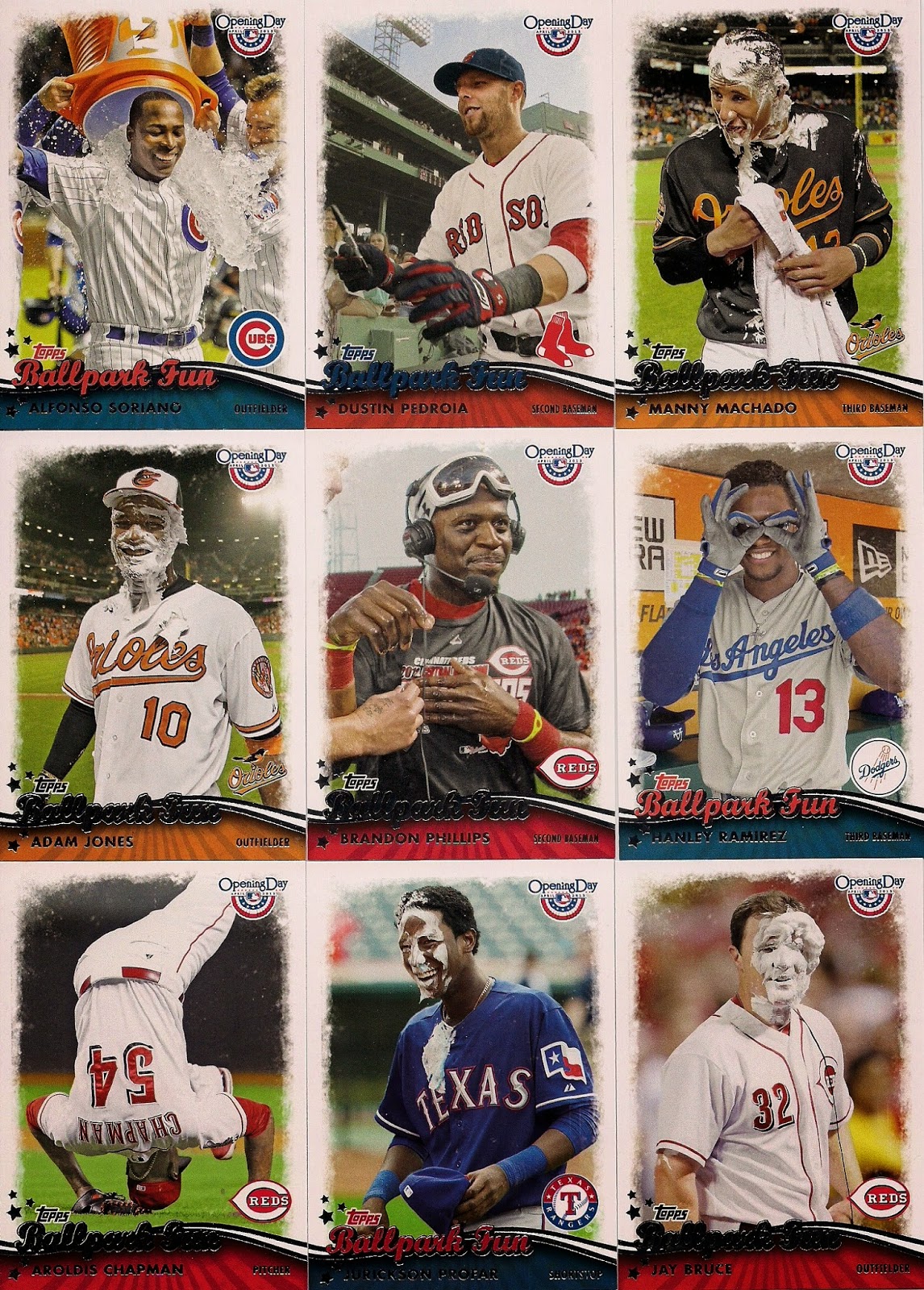 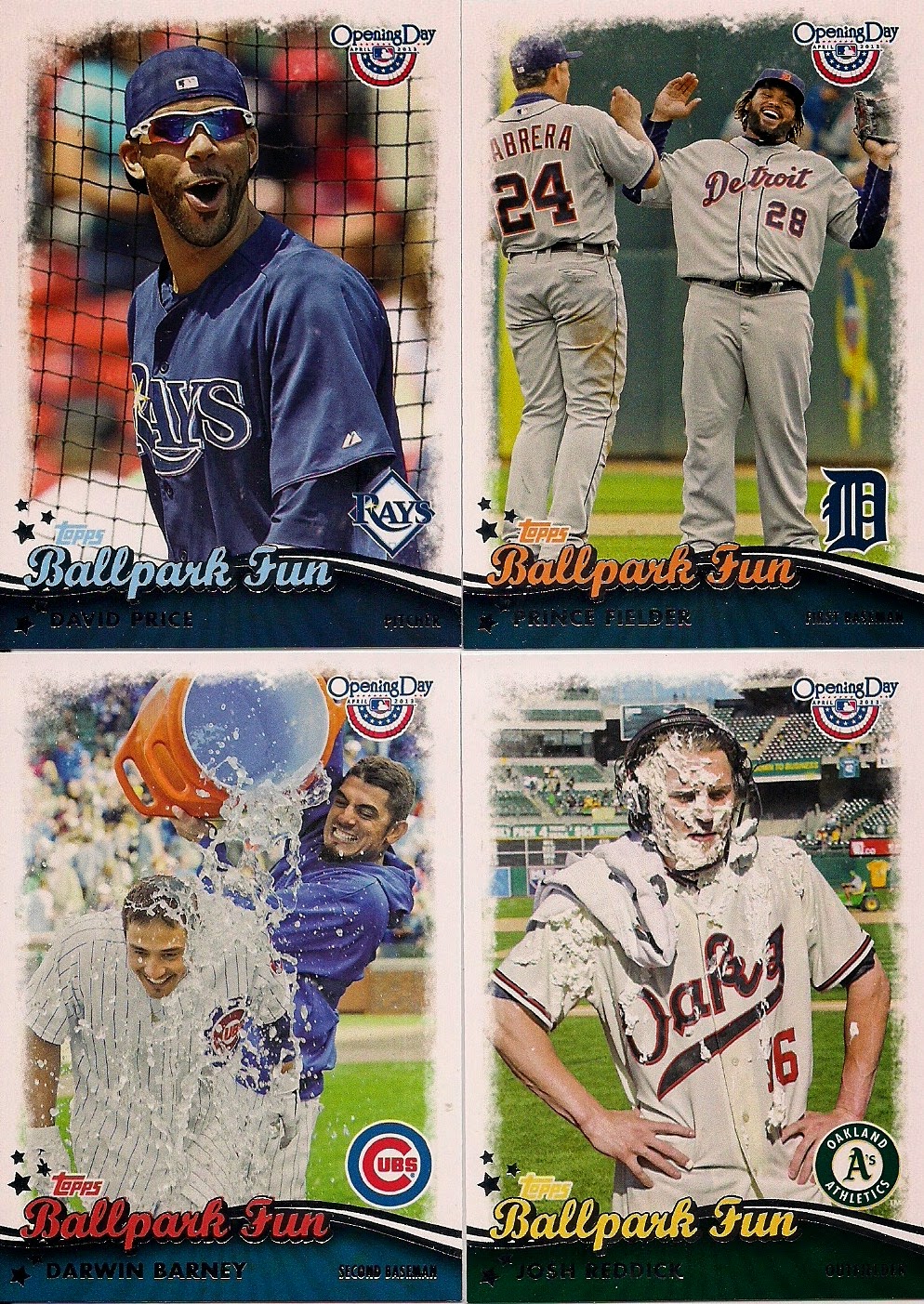 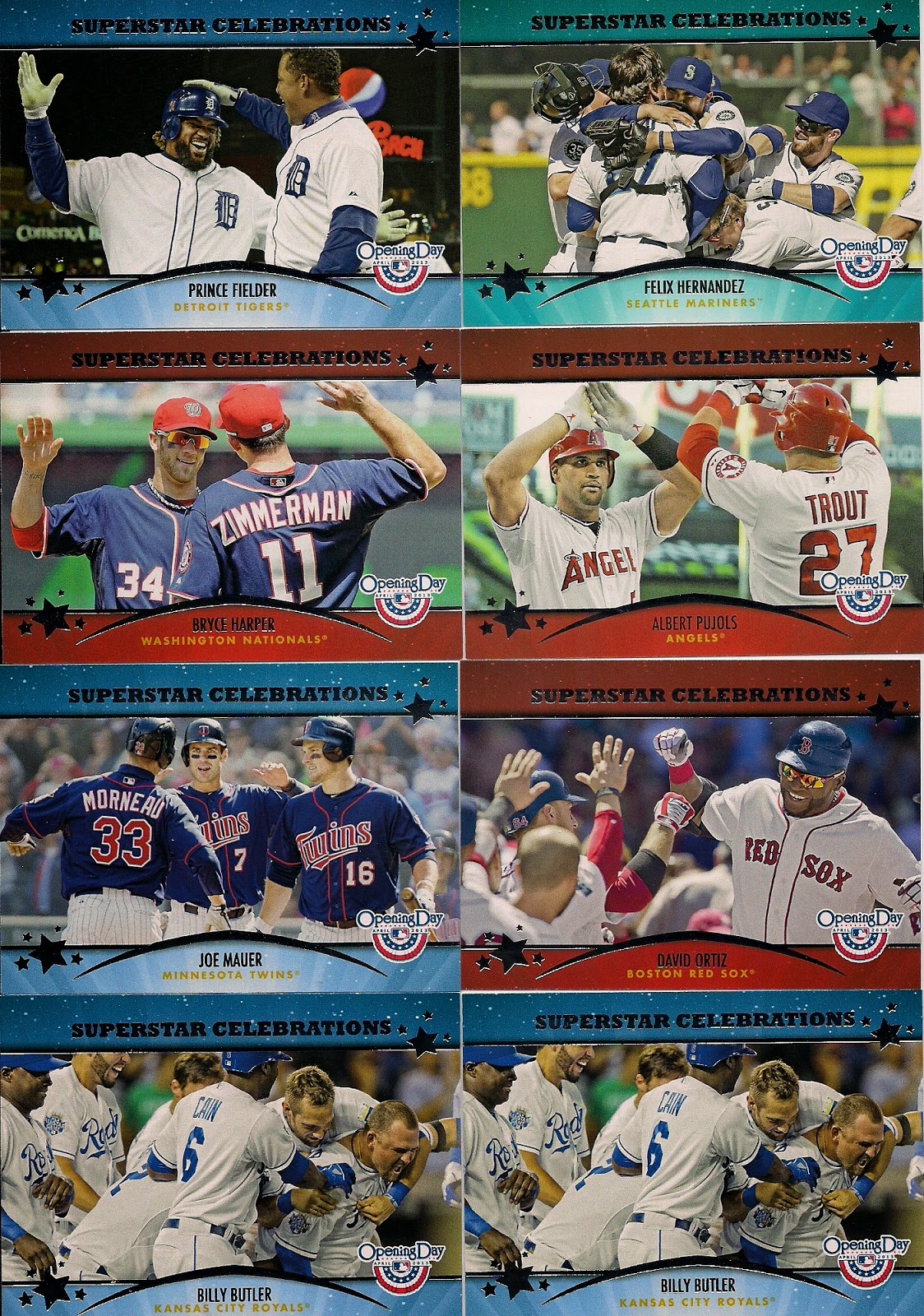 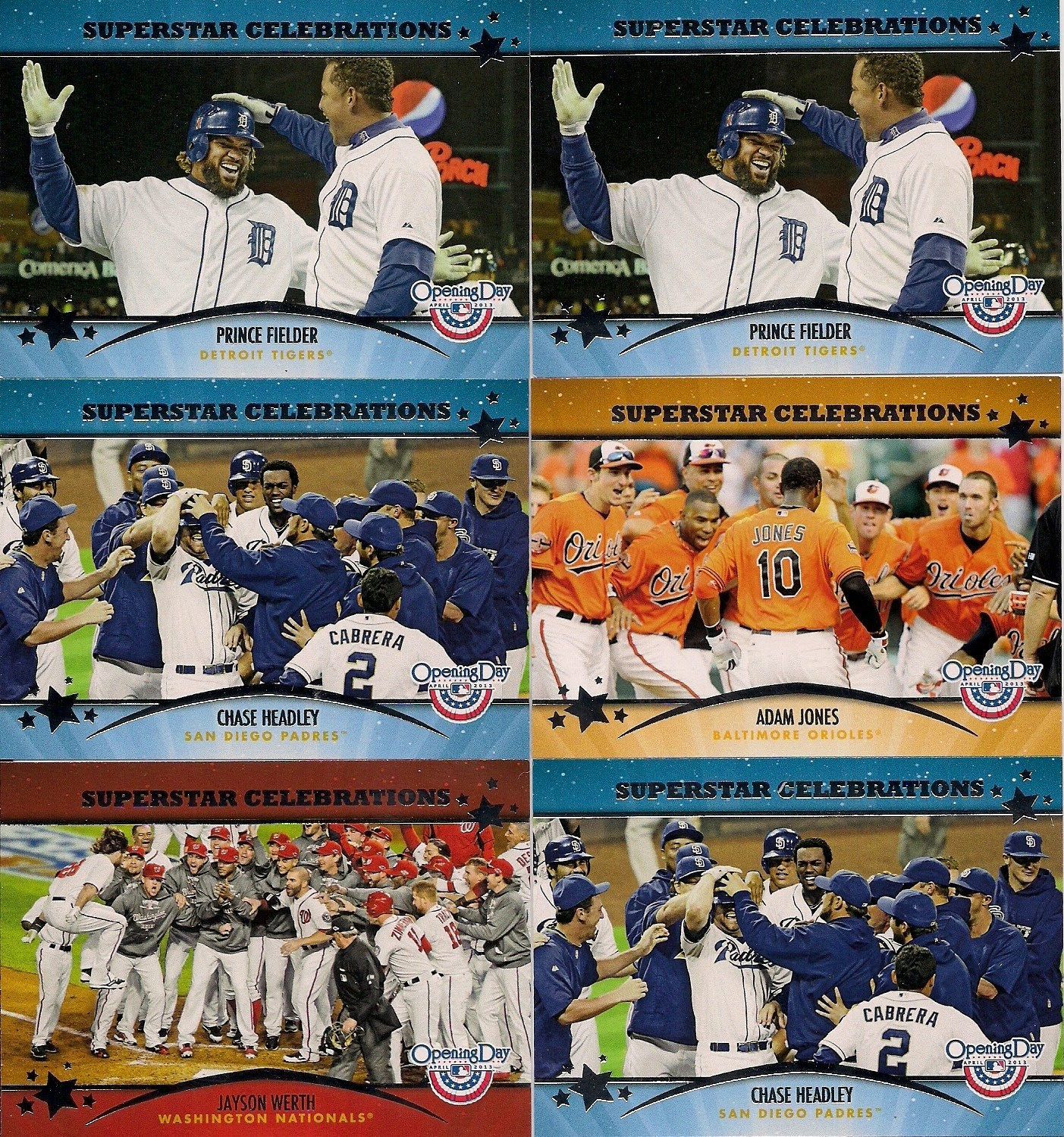 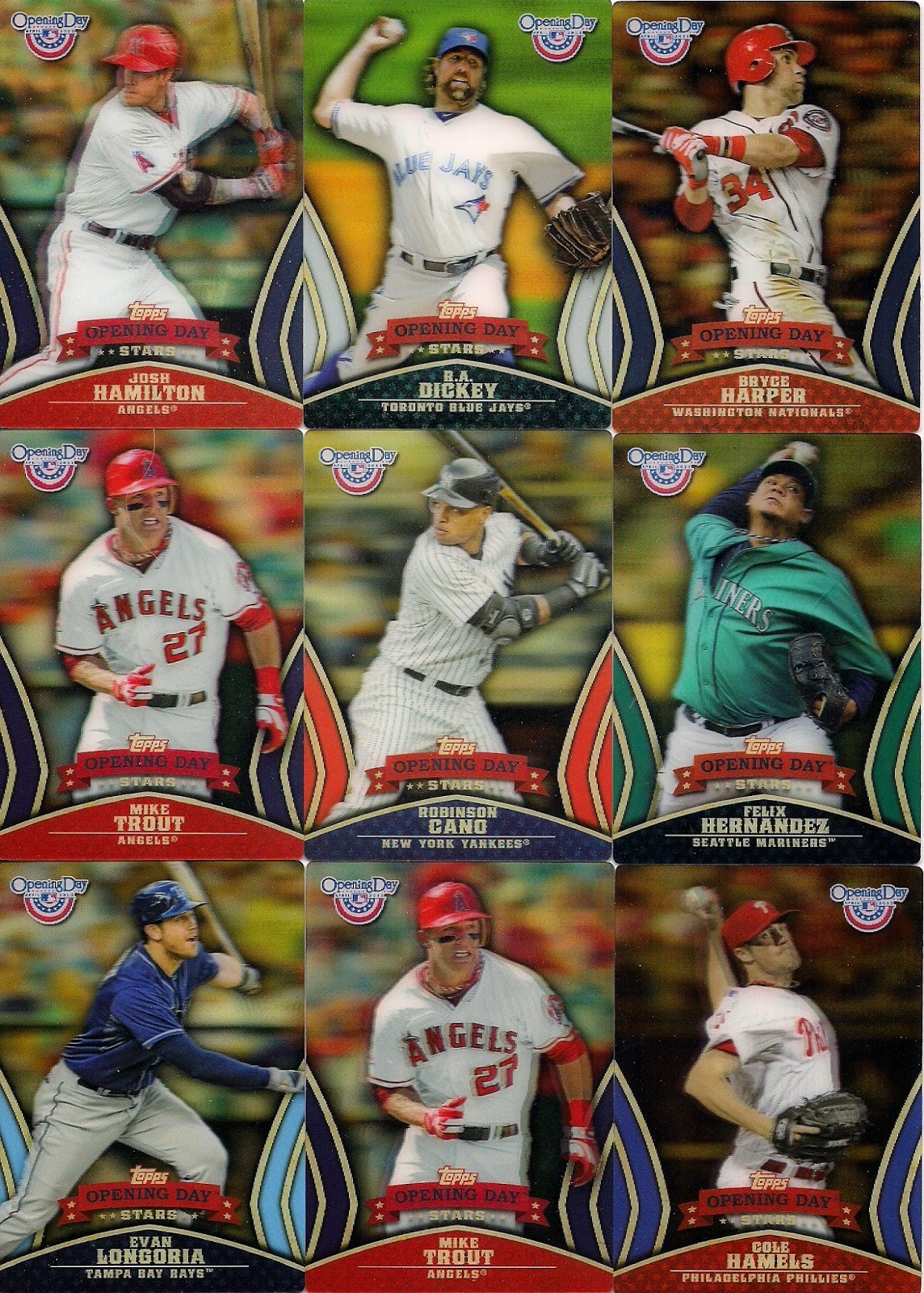 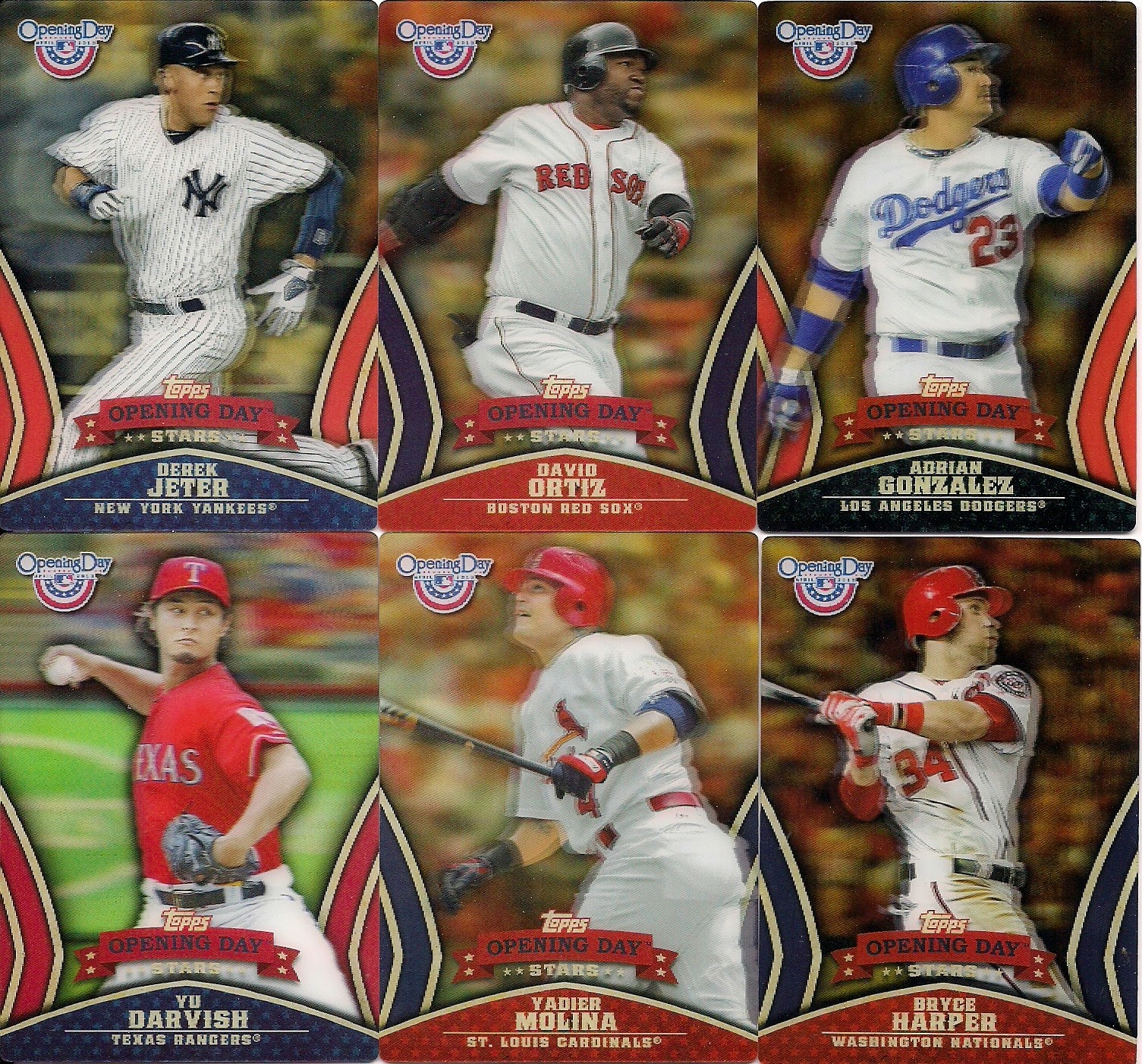 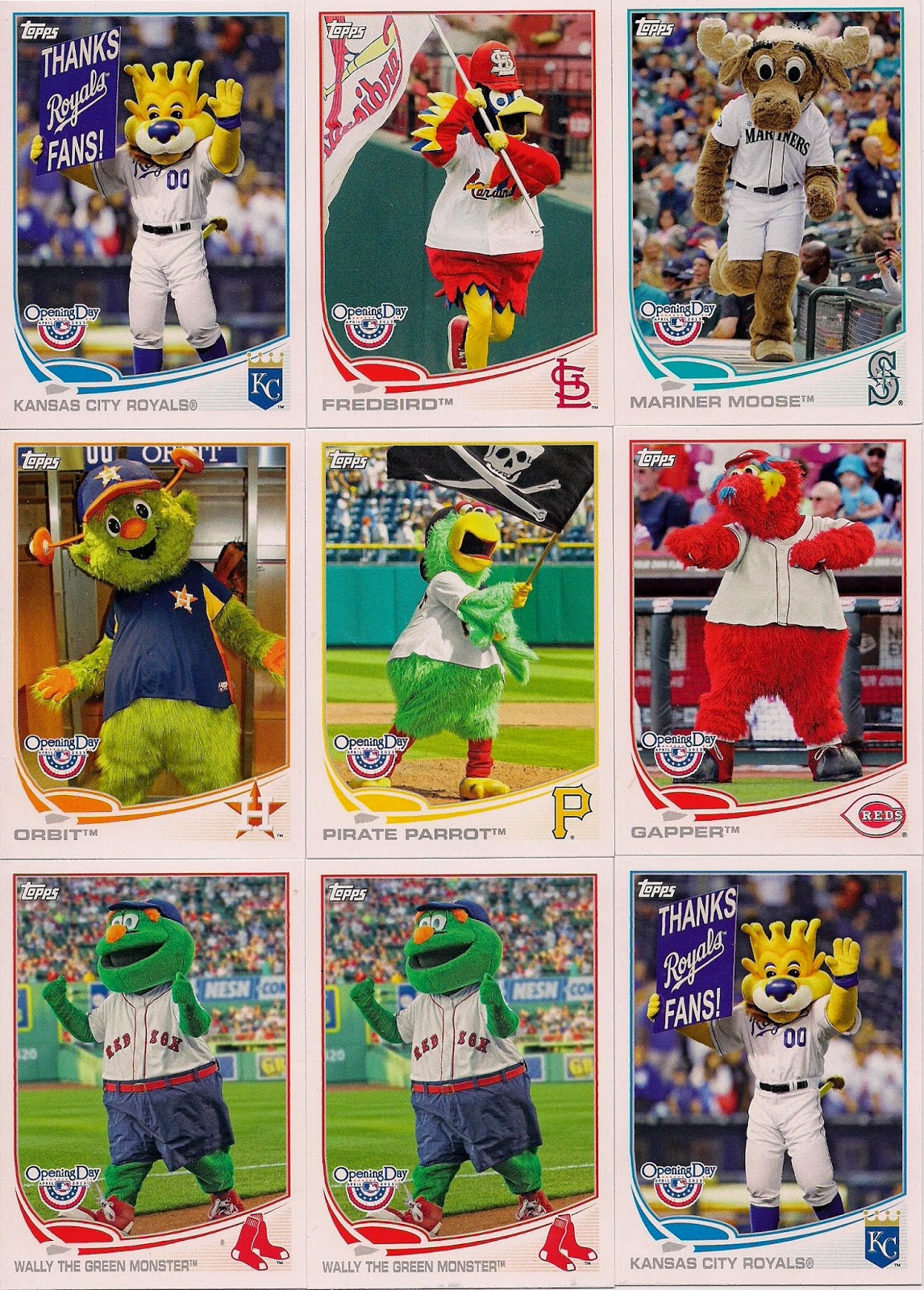 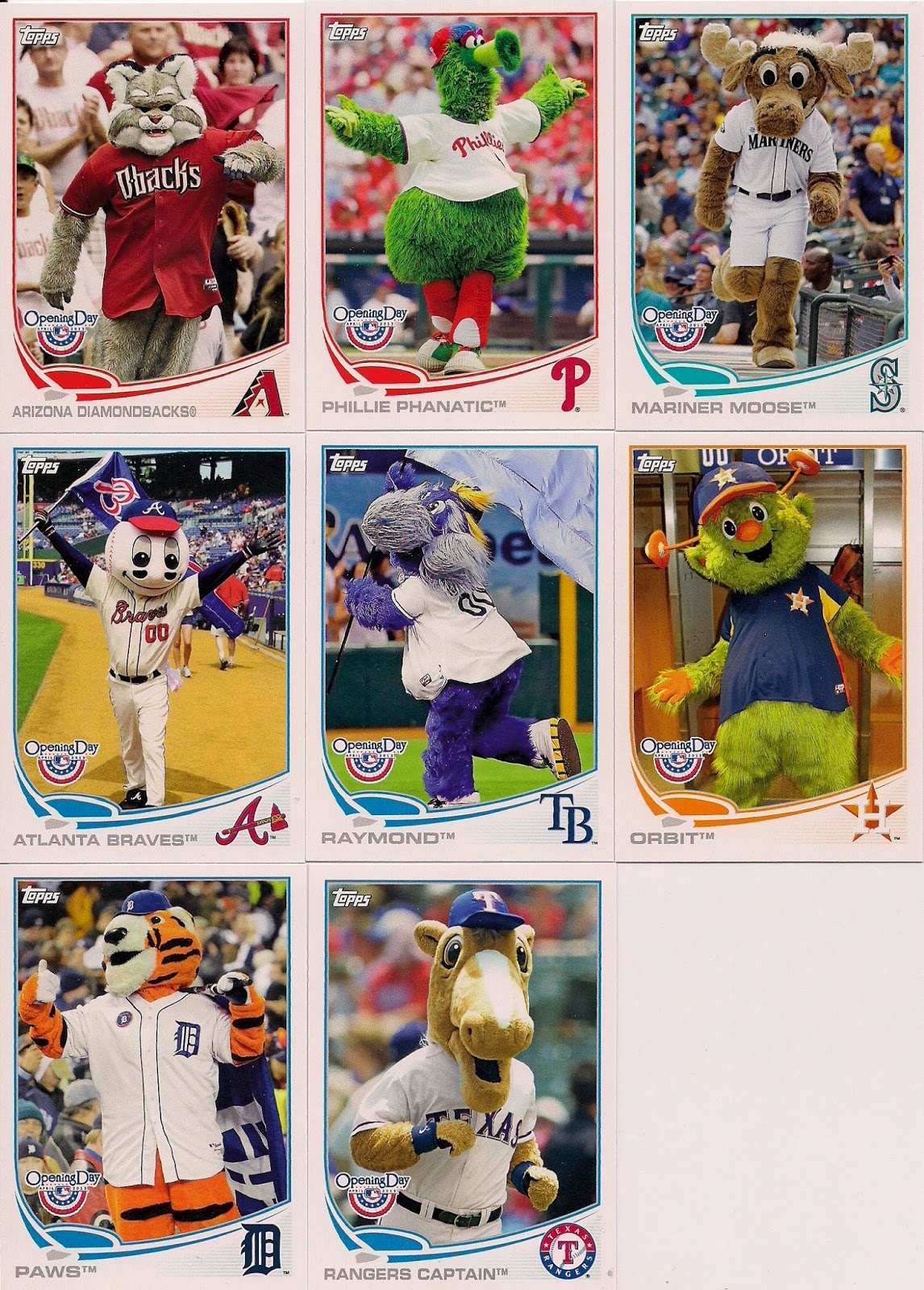 I actually have a second Pirate Parrot card that I missed scanning.

Of course, the best part of Opening Day from last year are the blue sparkly parallels. I pulled a number of them, most of which will be sent to respective pleasant blog folk (I've already worked out 1 or 2 deals).

Two of the blue sparkles were Dodgers: 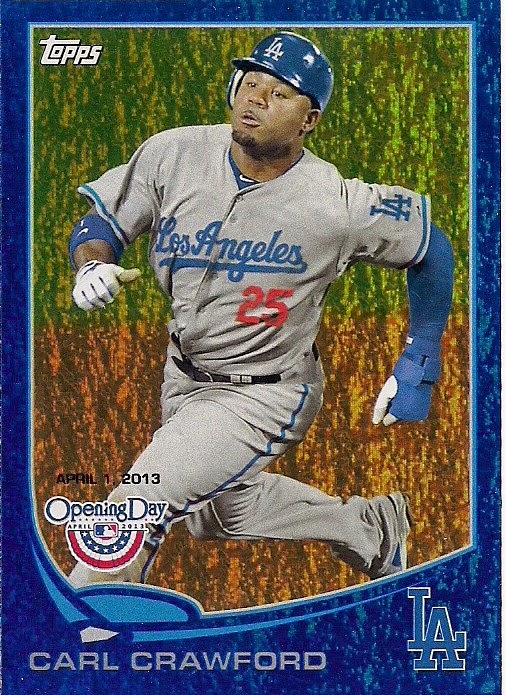 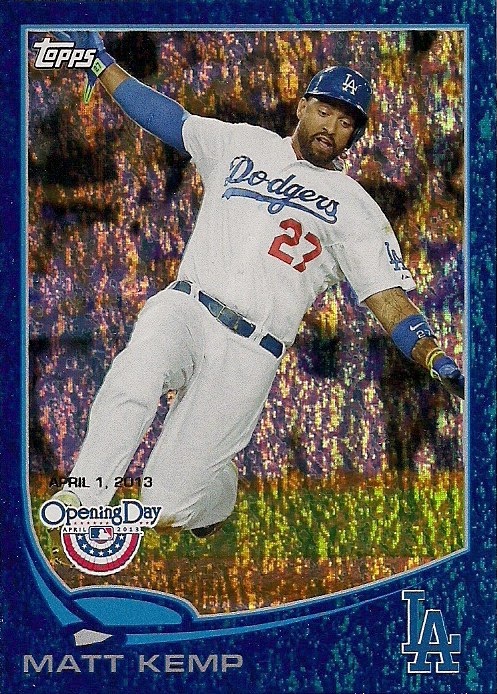 I have the Crawford card already so some Dodgery fan will get that one. The Kemp is very welcome and arrived in the very last blaster I opened.

As for the other inserts, I don't have any plans to complete any of them, so if I haven't already reserved cards for some people, they're available.

It was pretty cool finding a bargain like that. It doesn't happen very often. And, yeah, there was part of me that felt like I was snagging merchandise meant for kiddies, the mean old man taking candy from babies.

But even though it's Opening Day, we all know kids aren't buying this stuff. These cards are definitely for adults.

And that's why I'm going back tonight to grab the few discounted blasters that I spotted tucked in the corner of the shelf on the way out of the store.

AdamE said…
No fair my WM doesn't carry any cards at all now.

Jeff said…
None of my local blue parallel or red parallel stores keep past years' products. I would probably be a buyer of discounted stuff from older years. In fact, visiting my dad down in the south last year, I did pick up some discounted 2010 Topps.
May 12, 2014 at 8:30 PM

Nick said…
I'd love the Felix Hernandez "Superstar Celebrations" if you wouldn't mind setting it aside.
May 12, 2014 at 9:40 PM

hiflew said…
I don't have a red store nearby and the blue store seems to be getting rid of sports cards in favor of CCGs. Needless to say, I am very jealous at the moment. That is just a tremendous deal, especially the 2007s. I have never seen that Beltran card before or any other from that insert set.

BobWalkthePlank said…
That is awesome. I would have loaded up too. If the Parrot is still unclaimed I would be happy to trade you.
May 12, 2014 at 10:10 PM

night owl said…
AdamE ~ Any Red Sox I don't need for the base set are set aside for you.

PATP ~ I'll save most of the PATP Play Hard cards for you, but Molina was claimed by someone else.

Richard ~ I'll save the Rangers captain for you, and I know I pulled at least one blue Phillie, I'll have to check if it's one of those numbers.

hiflew ~ You're in luck, I pulled one of those 4 blue Rockies. I'll leave you in suspense on which.

Commishbob said…
Orbit!! He's the ONLY reason to go to an Astros game! (Well, that and to be amazed at how short Jose Altuve really is.) Save the dupe for me will ya? I have something coming your way.
May 13, 2014 at 8:38 AM

After all this time, I'm extremely light on Dodgers stuff, but I have a pretty significant card purchase coming up in a couple of weeks if all goes well.

Unknown said…
Curses foiled again. I went to 2 local Walmart's today, and all they had was the normal crappy 4 foot section of junk. I love finding those great deals. Just the other day I was at my local Meijer, and they had a couple of rack packs that I did not recognize from Topps. They had 80 cards and did not have a year listed on them. I looked at the back and saw that it was from 2008. Great I need a lot of Topps cards from 2008 and they were somewhat reduced. Reg $9.99 for $5.99. I figured that was a good price for 80 cards, especially now that you get 36 cards for 5 bucks. They ended up being the Topps 2008 update cards....Score, because I did not have a single update card from this set. Yea I know you don't like the update cards, but I like them because you get a lot of local team players you would not otherwise see.

Fuji said…
Amazing find. I saw this post at work today and drove to my local WM on my way home. Sadly... I didn't find squat. It was worth it just to pull all of those mascots and lenticular inserts.
May 15, 2014 at 12:35 AM