Another first for newbie night owl 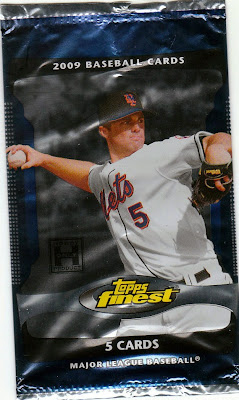 The other day I went to the mall to buy some new tires. Always a fun purchase. As usual, they didn't have the tires that I wanted. They were "out." But, amazingly, they had another brand of tire that was "the cheapest one we have," but still more expensive than the one I wanted.

I've been through this charade before. So, after a little haggling, I let them put some new tires on my vehicle and I hit the mall while they did the dirty deed. To ease my pain, I hit the overpriced hobby shop that is right next door.

I didn't have much money, especially after taking a hit on the tires, but I knew I wanted to grab a couple packs of Finest for one reason only. And that is: I have never bought a pack of Finest in my entire life. Never. Shocking isn't it? But I'm still keeping my card collector badge.

So I was prepared to take the plunge. The guy behind the counter was giddy when I asked for Finest. Then he reached in the box and pulled out the last pack. There was no second pack. I looked at the other 2009 options. Base Upper Deck and Topps. Stuff I can find in retail. Then I heard myself say, "I'll take a pack of SPx." I don't know why I said that. I don't like SPx. But I'm happy I did say that. And with that bit of foreshadowing, let's see what I got:

FINEST PACK (5 cards in a pack) 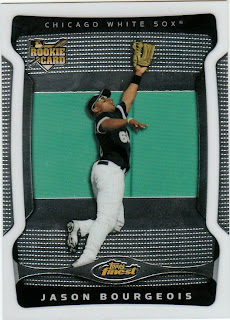 Never heard of this guy. He's now playing in the Brewers organization. I turned the card over to try to figure out who he was and two things caught my attention. 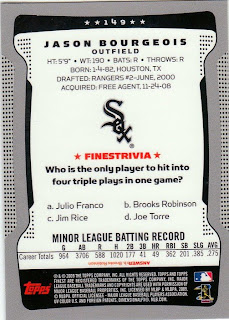 The first was that he had played 964 minor league games (!) in his career. Now that is a career minor leaguer. I later found out that he finally made his major league debut for the White Sox last September.
But the other thing that drew my eye was the trivia question. The question asks: "Who is the only player to hit in four triple plays in one game?" I read that and immediately knew something was screwed up. Four triple plays in one game? Any player who did that would have burnt the stadium down. I certainly would have heard of it before.
No, the question should have been, "Who is the only player to hit into four triple plays in a CAREER?" And the answer is Brooks Robinson. And I'm sure that Brooksie thought four in a career was plenty. 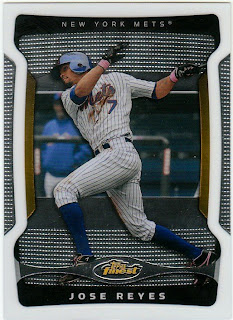 #7 - Jose Reyes, Mets. There sure are a lot of photos of the Mets playing on Mother's Day this year. Lots of pink wristbands. I'm not a Reyes fan. A lot of shenanigans going on with that guy. 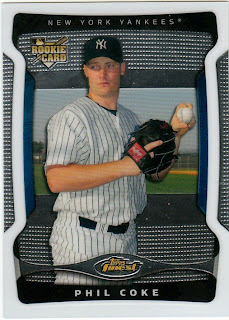 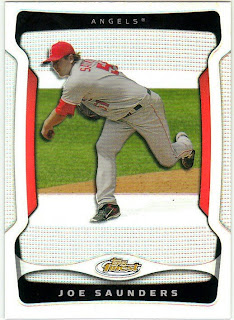 #122 - Joe Saunders, Angels, refractor. I didn't even know it was a refractor until I typed this. I pull a stunning number of Angels cards. I have pulled three Angels jersey cards this year. I already sent one to RWH. He'll be happy to know he's getting the other two, too. 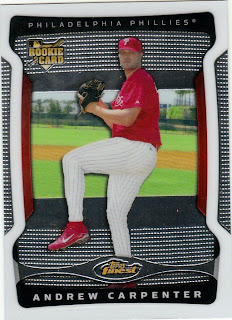 #126 - Andrew Carpenter, Phillies. Another guy I barely know.
And that completes the pack. Not a happy one. Certainly not worth the money. Time to open the SPx pack. 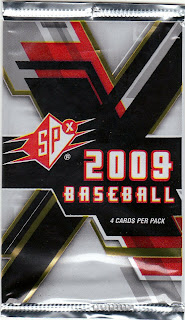 SPx PACK (Four cards in a pack -- but not this one) 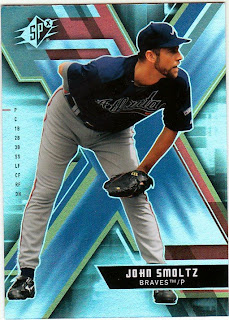 #84 - John Smoltz, Braves. Pictured with the Braves, which is how things should be. 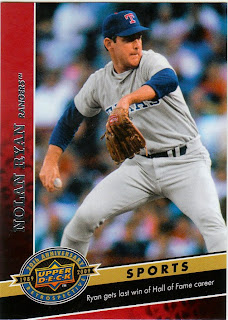 #571 - 20th anniversary Upper Deck retro shmetro Nolan Ryan gets last win of his career. The only thing good about this card is it was covering up this: 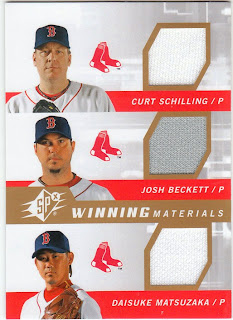 Winning Materials, triple swatchy relic thingy of Red Sox pitchers Curt Schilling, Josh Beckett and Daisuke Matsuzaka. Quite nice. And the card makes sense. Every player is with the same team and they're all pitchers. No pairing of Miguel Cabrera with Randy Johnson and trying to force feed it to collectors. I guess you could complain that Schilling hadn't pitched since 2007, but it's still cool.
OK, on to the business at hand. To you Red Sox fans who are drooling, here are the ground rules. Red Sox bloggers with whom I've traded get first crack at this card. That means Pursuit of 80sness, Thoughts and Sox, Cardboard Icons, and possibly someone else I'm forgetting. Andy of Traded Sets also gets a shot because I know he likes the relics. Also, if you're a reader that I've traded with before, you get first crack, too. Send me an email if you're interested. I am looking for something Dodgerish in exchange. Something on a similar scale or vintagey. If I don't hear from any of those guys, then I'll listen to anyone else. 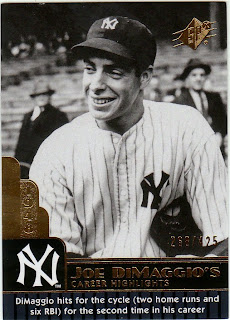 #JD-72 - Joe DiMaggio Career Highlight series. Joe D. hits for the cycle for the second time in his career. This is numbered 268/425. Why they have a series like this numbered is beyond my comprehension. 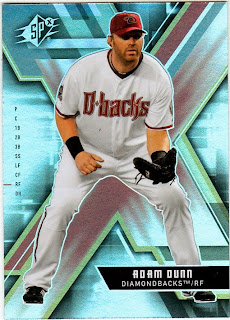 #19 - Adam Dunn, Diamondbacks (now with the Nationals). Meh.
Well, I never thought I'd say this, but the SPx pack just obliterated the Finest pack. Shows you what the newbie knows.

Steve Gierman said…
That is why I decided to pick up the White Sox Finest team set on the cheap on eBay this year. I cost less than a pack of Finest.

Mark Aubrey said…
Very nice pull. You know, though, the only reason I read to the end of your blog entries is to glance over at Alyssa Milano. Thanks.
June 18, 2009 at 10:18 AM

Andy said…
Thanks for the shot, but A) I have nothing to trade since I sent all my good stuff to gcrl in return for nothing and B) I hate the Red Sox and Schilling in particular.
Nice pull, though!
June 18, 2009 at 12:22 PM

night owl said…
OK, It's a done deal. The Red Sox triple relic will be headed to Newspaperman.

Unknown said…
love b. robinson! I can't believe he hit four triple plays..how amazing! I heard he is playing in the sports challenge soon...sounds cool. I love the cards!
June 18, 2009 at 6:30 PM