Yes, we get it, he's a third baseman 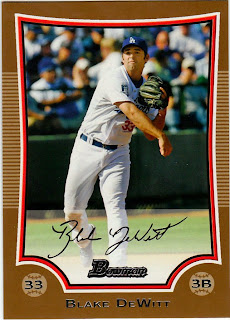 Marie, of A Cardboard Problem, was nice enough to send me some Dodgers the other day. One of the cards she sent was the first 2009 Bowman card I've seen in person (no Bowman where I live at the moment). It's a gold parallel of current Dodger minor leaguer Blake DeWitt.

But even though I haven't seen any Bowman yet, the card photo seemed awfully familiar. So I did a quick inventory. Sure enough, the photo was the same one used in the 2008 Bowman Chrome set. 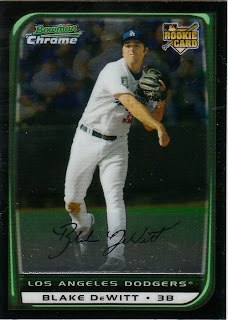 This stuff drives me batty. It's bad enough when the same photo is used in multiple sets during the same year. But we've turned the calendar to 2009 now. Find an updated photo, please, or at least a different one. This isn't 1969. You don't need to keep using the same Hank Aaron picture.
Even an exclusive card, like one with an autograph, isn't immune to DeWitt photo duplication. Here is the 2008 Stadium Club autographed card of DeWitt: 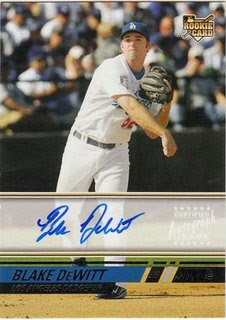 Golly gee, DeWitt's arm has got to be tired making all those multiple throws over to first for the nice photographer. Oh wait, no, it's not tired, because IT'S THE SAME PHOTO.
I realize this is fairly common these days. Derek Lowe has been shown pitching in San Francisco on countless cards over the last couple of years. But it boggles my mind that card companies would do this. In the newspaper business, we live in virtual terror that we'll end up using a photo that we've printed before. 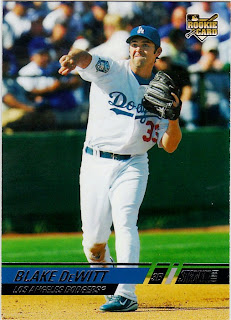 Here is the 2008 Stadium Club base card of DeWitt. This is the exact same play shown on the other cards, only photographed a couple seconds earlier. Apparently, DeWitt's time is so valuable that there was a window of only 10 seconds in which people were allowed to take his photo for baseball cards.
But I know that's not true, because I have cards of DeWitt in his batting stance, swinging at a pitch, in the on-deck circle, etc. That means card companies CAN offer different photos of each player. Perhaps they're simply issuing too many sets and don't have enough photographs to go around.
I just don't understand who would be happy with the same photo over and over again. DeWitt's family can't be. (Mama DeWitt: "Blakey, this is the same photo as LAST year.") There is only person I can think of that is happy with these DeWitt cards. 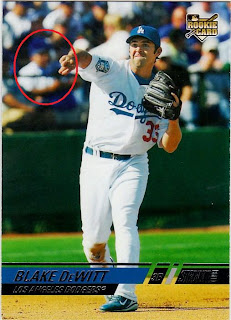 It's the guy I have circled in red. How lucky is that spectator? He gets to appear on multiple cards! And all he had to do was sit there like a lump. 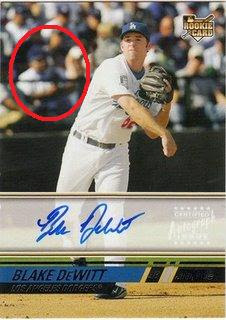 See? There he is again, admiring that familiar DeWitt toss across the diamond. I'll call him "Blue Cap Spectator Man." 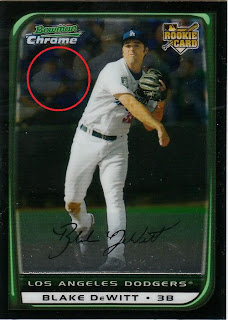 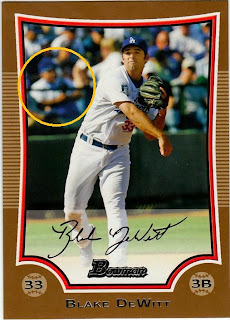 Except when card companies keep using the same photo over and over! There he is again! At this rate, Blue Cap Spectator Man may be appearing on baseball cards until the day he dies.
Anyway, enough of that. Marie sent me a few other Dodgers, too. 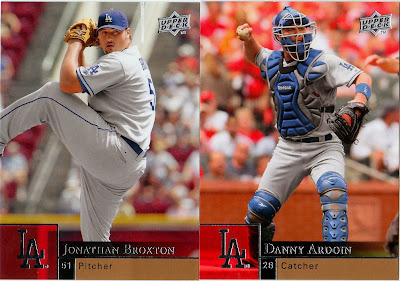 Here are two rough customers from 2009 Upper Deck Series 2. Jonathan Broxton and Danny Ardoin. These cards make up for not getting any Dodgers in the Series 2 blaster I bought the other day. 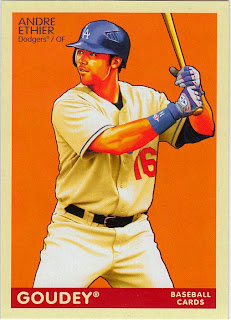 Here's a tolerable 2009 Goudey likeness of Andre Ethier, who needs to rediscover his April mojo. 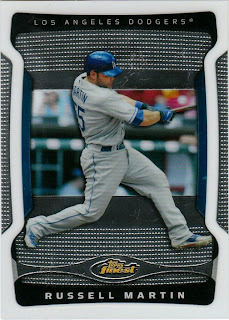 Lastly, a very fine Topps Finest card of Russell J. Now that I have two of the Martin Finest cards, should I collect all of the Martin parallels? I should, but I probably won't.
Thanks, Marie. I enjoy your blog quite a bit (Marie seems like a hoot to hang out with in person, by the way. Just a hunch). I'll be building a stack of cards you like. YSLs, Canos. Oh, and that Pujols guy.

Mark Aubrey said…
I think I've seen "Blue Cap Spectator Man" on other cards. He might have had different seats. Maybe he's like that guy that always shows up in the "Today Show" audience shots. I'll check later.
June 2, 2009 at 10:05 AM

Carl Crawford Cards said…
Man, that repeat is absolutely awful! You'd think Dewitt played a total of two innings or something and they had a hard time getting photos. On the other hand, maybe DeWitt is a Howard Hughes type and believes photos steal your soul, thus explaining why they only managed to sneak one photo of the guy.
June 2, 2009 at 2:12 PM

Anonymous said…
Wow, funny post! My guy Pelfrey rarely gets in many sets, If they repeated a photo for him it would really be tragic.
June 2, 2009 at 8:31 PM