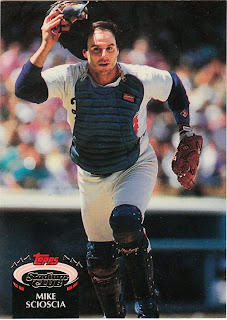 About a week-and-a-half ago, I featured a card package received from Lake Effect Cards. It was filled with Dodger goodies.

Before I even wrote the post, Greg emailed me and told me another package would be coming. This one would be even more tailored to my want lists. And it certainly was. Thanks to Greg, I can ignore a few sets forever. I like that. I'll grab the giant magic marker hanging over the fireplace that I have for such occasions and draw a huge line through four pesky sets.

The first one is the Dodger team set from 1992 Stadium Club. Mike Scioscia, Dave Hansen and Lenny Harris were the last three I needed, and I don't need none of them no more.

Here is another set that I don't have to waste brainpower on anymore:

1983 Topps. Now, you may have read how I completed this set already. But there were a few cards from the set in desperate need of upgrading. These three were the last of the woefully creased. And as much as Jack Clark cards deserve to be creased, I'm happy to have this perfect one in my '83 binder. 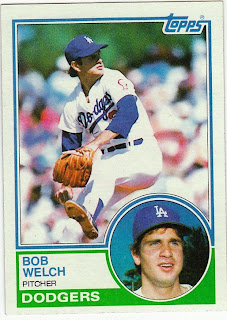 Also, Greg sent the last six Dodgers from the '83 set that I needed for my team binder. I'm featuring Welch here because he's another one my Dodger favorites. I need to track down his address for a TTM try. 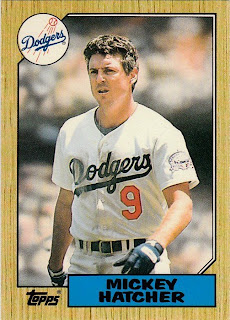 Next up are the Dodgers from 1987 Topps Traded. I'm enjoying all the suggestions on the name for the 1987 Topps design. I'll post on what I've settled on for the name sometime this weekend.

Greg sent five of the '87 traded Dodgers. The only one I need now is the much-maligned Matt Young. 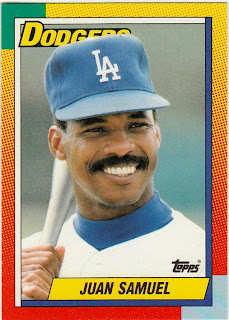 Here is the fourth set Greg completed for me. It's the 1990 Topps Traded Dodgers set. Juan Samuel and Stan Javier wrap up the whopping three-card set. Samuel was one of the many second baseman the Dodgers tried with minimal success after the departure of Steve Sax. It wasn't until Mark Grudzielanek and, really, Jeff Kent, until they had any kind of consistent production out of second again. 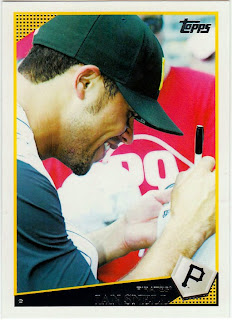 The other cards I received are for sets that I am a long way from completing. Among those were several 2009 Series 2 needs. I have been admiring this card of Nate Snell for awhile. This year, Topps is showing a wide variety of photos from tightly-cropped shots like Snell and Nelson Cruz to far away photos (Estaban German and a bunch of Oakland A's). They did a lot of that in the 1986 set, but for some reason it doesn't seem quite as jarring this time. 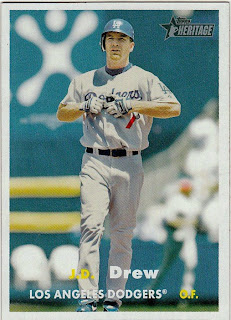 I also landed several 2006 Topps Heritage Dodgers. I'm displaying the J.D. Drew card because I like the Cingular Wireless logo in the background. Yeah, I know Cingular was taken over by AT&T. That's why I like it. Take that, you giant, soul-less corporation. That Cingular logo is there forever on this baseball card. 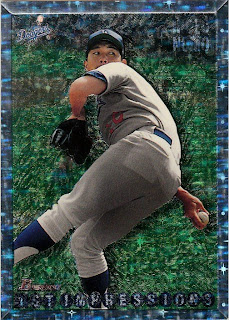 OK, the final two cards I'm showing are just plain cool. This one is from 1995 Bowman, some foil-type card of Hideo Nomo that gives off a very '90s-like wavy effect. Any Nomo card from his rookie year is very, very nice, and much appreciated. 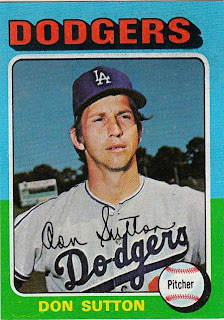 And this is my second 1975 Topps mini from Lake Effect Cards. A Don Sutton in surprisingly terrific shape. Not one of my mini cards is in this kind of shape. Very nice!

This is a set a I hope to complete one day. But I'm remaining realistic. I still need like 11 Dodgers and about 530 of the entire thing, so you know, we'll call it a "down-the-road" project.

Greg, I just dropped a package to you in the mail for the first set of cards. Another one will be on the way at some point. Thanks!

Dinged Corners said…
Wow. You have a card of player actually SMILING while signing an autograph! No grimitude!
June 17, 2009 at 1:18 AM