June 08, 2009
(Today is "Best Friends Day." What better day to appreciate others in the card blogging community? I do consider my fellow blog-ites friends. And I appreciate all that you do. Time for Cardboard Appreciation. This is the 34th in a series): 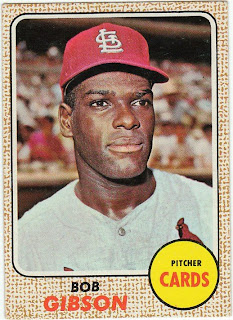 It is a bit odd that I should like this card so much, only because I do not like the 1968 Topps design at all. I've written about that before. In fact, for me, the '68 Topps set is very similar to a lot of modern sets in one particular way: I have very little interest in collecting the set because of how it looks, so therefore I try to find only the Dodgers and be done with it.

In fact, besides the Dodgers, I have only five cards from the '68 set (I've traded several away). One is the Ed Brinkman "yellow letters" variation card. One is Sam McDowell, because he's one of those 1960s pitchers that I so admire. And the other three make up a Cardinals trio that will probably get madding's attention.

One is Curt Flood, the other is Roger Maris (a card that I love since it's so odd to see him in anything other than a Yankee uniform), and the other is Bob Gibson, featured here. It is one great trifecta, one that I probably wouldn't trade, unless someone offered me some great old Dodgers in return.

But this Gibson card stands out for a few reasons. One is it is in fine shape for a 41-year-old card. The second is because the first time I saw the card was during my first year of collecting. The card was pictured in the 1975 Topps set as part of the '68 MVPs in the MVP subset.

The third is I have always admired Gibson. He is probably one of the top five dominant pitchers of all-time. You could make an argument for him being the most dominant of all-time.

Gibson was all business on the mound. He was intimidating, he worked very quickly, he didn't care whether you liked him or not. Roger Angell, my most favorite baseball writer, published a fantastic article on Gibson called, "Distance."

There is a great part of the article right at the beginning, in which Gibson is pitching during the 1968 World Series, the game in which he broke the record for most strikeouts in a game with 17. Gibson had just struck out Al Kaline for his 15th strikeout, which tied Sandy Koufax's mark.

Gibson's catcher, Tim McCarver, stood up and pointed to the scoreboard behind Gibson. Gibson kept gesturing for the ball, saying "Come on, come on. Let's go!" But finally Gibson turned around and read the scoreboard and reluctantly doffed his cap. "I hate that sort of thing," Angell quoted him as saying later.

Gibson was unique for his time. Athletes were supposed to be self-effacing. Gibson wasn't. He said, "I'm never surprised by what I do," and sportswriters were stunned. Talk like that was outrageous. Talk like that from a African-American athlete in a southern city was shocking.

Gibson understood the game was a business. And he did what he had to do to survive. He didn't pal around with players on other teams. He said, in Angell's story, that he didn't act arrogant or aloof to scare anyone, it was just how he felt. He would pitch inside. He was competitive, he wanted to win. No apologies. Everyone has a different method to survive between the lines. That was Gibson's method.

And here is an excerpt from the article by Angell that I find absolutely fascinating, a commentary on our adulation of athletes. This is Angell talking:

"It is my own suspicion that both sportswriters and fans are increasingly resentful of the fame and adulation and immense wealth that are now bestowed so swiftly upon so many young professional athletes, and are envious of their privileged and apparently carefree style of living. The resentment is a half-conscious appreciation of the fact that they themselves -- the fans and the media people, that is -- have to a great degree created these golden youths, and because of that there is indeed a wish to own them, to demand ceaseless, inhumanely repeated dazzling performances from them on the field, and to require absolute access to their private lives as well. Most athletes, who are very young when they first come to prominence and, for the most part, have a very limited experience of the world, respond to these demands either with a convulsive, wholly artificial public "image" of affability, or (more often, of late) with surliness or angry silence. Bob Gibson did neither. Somehow, he has always kept his distance and his strangeness, and there is something upright and old-fashioned about such stubborn propriety. He is there if anyone really wants to close that space -- the whole man, and not a piece of him or an image of him -- but many of us may prefer not to do so, because at a distance (from sixty feet six inches away, perhaps) he stands whole and undiminished, and beyond our envy: the athlete incarnate, the player."

Roger Angell
p. 147-148
"Distance"
"Once More Around the Park, A Baseball Reader"
Ballentine Books, 1991
Now, that kind of player is someone to appreciate.

Matt Runyon said…
Roger Angell was a great writer. I reread one of his books about once every couple of years.
June 8, 2009 at 11:28 PM

MMayes said…
I grew up a Cardinal fan in the 70's. My first Cardinal game was Sunday, September 26, 1971. Gibson was supposed to pitch, but they decided to shut him down and Darryl Patterson (who?) was inserted as the starter. That was one mad 7 year old. I absolutely loved Gibson and, when I get to his card in the 1972 set (#130), I'll share a little more of this.