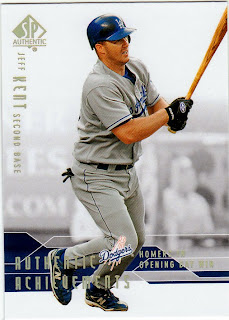 We are holding a garage sale today. There are all kinds of questionables pulling up to the house. The dog has been whining all day. I want it to be over quickly. So I'll post some cards I received in a couple of trades to take my mind off the proceedings.

The first are from Rob of Voice of the Collector. I keep sending him 20th anniversary Upper Deck cards, and instead of sending me something appropriate back, like a restraining order or anthrax, he sends me Dodgers! 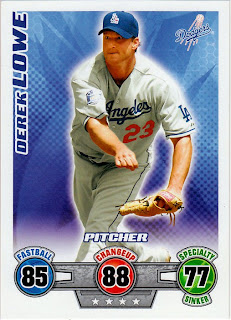 I received several Topps Attax cards. I may or may not have the whole set of Dodgers by now (aside from all the foil variations). I have no idea if there is a checklist for these cards.

I like this card because Lowe is wearing the patriotic Dodgers cap. I believe it's from his 4th of July start from last year. Appropriately, it was in San Francisco, where it seems just about all of Lowe's Dodger card photos were taken. Lowe got the win even after giving up five runs in five innings. 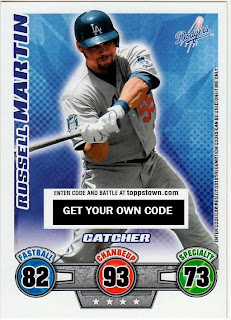 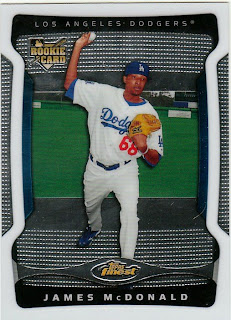 Lastly, a snazzy '09 Topps Finest card of James McDonald, who is now playing in Triple A for Albuquerque.
Thanks for the cards, Rob. I already have a few more 20th anniversary cards. Hmmm. How do I keep finding those things?
Next, I have some cards from the bearded wonder (at least I think he's still bearded). Beardy, a.k.a., Greg, is a trading maniac. I think that's pretty obvious. And he likes his O's. He sent me a shipment of Dodgers earlier this week. But I was ready. I have Orioles packed up and ready to go. It's very weird of me to be that prepared. 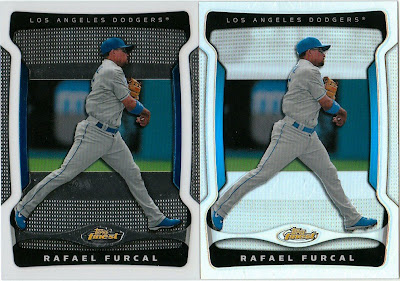 I'll start with two Finest cards of Rafael Furcal. The difference between the regular card and the refractor is very obvious here, but it certainly wasn't when I pulled them out of the package. I thought they were doubles. My powers of observation will not amaze you. 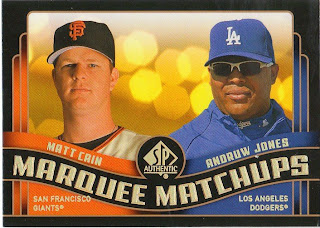 Nothing I can say can top the ridiculousness of the statement on this card. 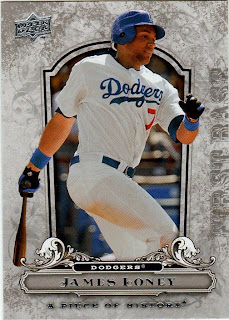 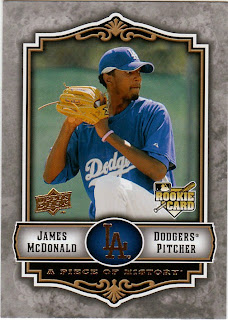 2009 Piece of Hooey. It looks a little better. I still don't ever want to think of tombstones when I look at baseball cards. So, now UD is making me question my place in the universe AND think about my mortality. That is heavy stuff, UD. Heavy, heavy stuff. 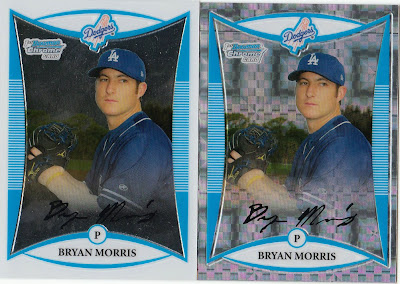 A couple of Bowman Chrome cards of former Dodgers prospect Bryan Morris, yet another Dodger minor leaguer who has dealt with arm problems. But now he's the Pirates' problem.
The xrefractor card is numbered to 250. I never noticed that they were numbered before. Golly gosh, now I have to check my other Bowman chrome xrefractors. A collector's job is never done. 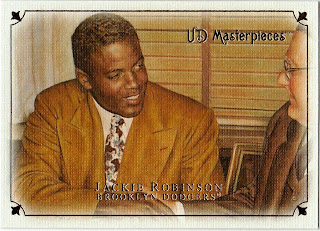 2007 Masterpieces Jackie Robinson. That completes the Masterpieces Dodgers set for me. I think. If I ever get my want list completely updated, I'll know.
So, thanks beardy. I've got to get back to the garage sale now. Or more accurately, I've got to see if my wife needs a break, or lunch, or a gun ... or something. Speaking of Piece of Hooey, it's amazing what you can get people to buy.

beardy said…
the beard is still alive and well. i came to my senses eventually, but if the Orioles keep this up i may be changing my handle to smoothy.

dayf said…
"I keep sending him 20th anniversary Upper Deck cards, and instead of sending me something appropriate back, like a restraining order or anthrax"

night owl said…
You know, DC, I tried to, but failed.

They were not anything great, nothing I could sell, say, on eBay and get anything for them. But I thought someone might pick them up.