Nobody wants ya, Zane 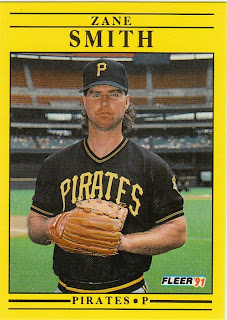 Like I mentioned yesterday, we held a garage sale this weekend. We did quite well. I wasn't expecting that. I'm never expecting that. I look at our puny display of junk and, every single time, say "nobody is going to buy any of this." And every time I'm proven wrong by the insanity of others.

So stuff I expected to take to the landfill ended up producing some much-needed cash. Books sold. Can you believe that? I thought no one read anymore. Books sold like crazy. Clothes sold. Kiddie toys sold (I expected that one). But one of the items that sat forlornly on the lawn for the entire sale was a shoebox of baseball cards.

These weren't special cards at all. I saw a few guys look over at them like they thought they might score a 1958 Willie Mays, only to realize they were cards from the last 25-30 years. But that's why they were in the garage sale. These weren't cards I could sell online, and I'm not a Craiglist idiot. I knew the cards were worthless. I couldn't trade most of these to any bloggers, because they were either cards from the land of overproduction or very recent cards that turn up in every single pack (no true collector on the planet needs another 2008 Heritage card of Erik Bedard).

But I figured for 8 bucks, someone would take a chance on 900 or so cards, right? Aren't there still people out there with no clue about cards who think every baseball card is going to make them rich? 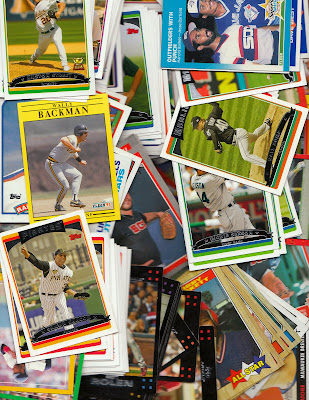 There's a cardboard sampling of what was offered. At the very least, I expected someone to scoop them up and give them to their grandson. That's what happened the last time I did this. I had a much bigger box then. A woman stopped by super early and bought the entire box. I think it was 30 bucks. I kind of wish I had the contents of that box to trade now. 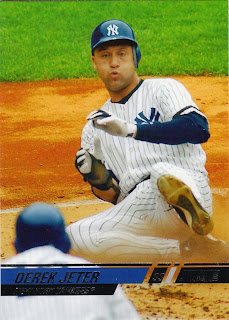 I even threw in a few key Yankees cards, because everyone around here practically loses control of their bodily functions every time they see a Yankee. It's pathetic, I know.
But the cards just sat there. I don't think it's because kids don't collect cards anymore. I don't fully subscribe to that idea. Yes, I admit that when I am in the card aisle and I hear the stamping of boys' feet as they run to the aisle, more often then not I do not have to step aside because what they're running for are Pokemon or Magic cards. But I still see kids looking through sports cards. I still see kids at card shows. And last year, when teachers asked parents to put together prize packages for an end-of-the-school-year raffle, I boxed up a bunch of Yankees doubles and other assorted cards and the boys turned into tiny Charlie Sheens trying to outbid each other for it.
So, I still hoped someone would come along and start a collection for somebody. But nobody did. I marked the box down. Still nobody. 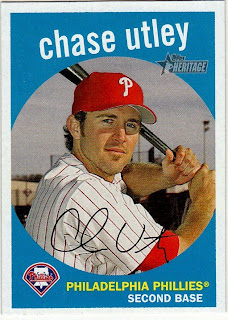 So, sorry Chase, nobody wants you. 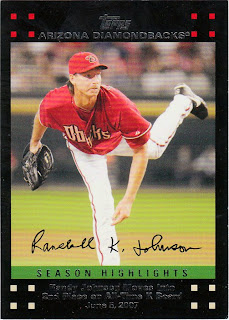 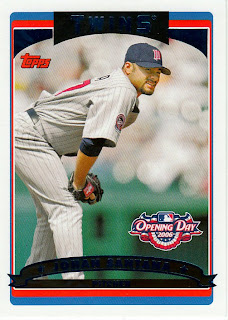 And that goes for you, Johan. 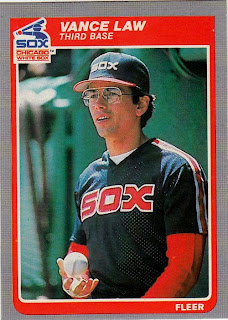 And even you, Vance.
But I don't think this is a sign of anything. Maybe with the economy, people are focusing on more practical things like clothes and handy household items. I don't know. I'm not disappointed, just a little surprised is all.
The disappointing part, for me, is I pulled all these cards, and now I dread the idea of filing them back. So, if anyone wants these things, I will be happy to send them off to the first person who is interested.
Now, I am warning you: there are a ton of doubles in here. A number of triples and quadruples, too. The 24 Todd Burns cards I landed a couple months ago? About half of them are in there. Many of these cards are ones you have seen if you bought even a minimum of packs the last few years. So if you're a regular card blogger, 98 percent of these cards you won't want. You might want to pass this one up, unless you know someone you can unload the cards on.
But if you want to give this baseball card collecting thing a try, it's not a bad place to start.

Motherscratcher said…
Hey! I remember the Todd Burns cards! (I would type LOL if I was the kind of person who types LOL...which I'm not).

I think that maybe the problem is that there are still a lot of people out there who think that cards are worth something, and they're just smart enough (or dumb enough depending on how you look at it) to know what cards Beckett says are worth money. I know a few years ago I would have been in that group. They looked through your box and didn't find a Mattingly or Gwynn rookie so they didn't want to spend 8 measily bucks on a box full of cards.

hartmanj said…
I would have bought them also. I have two little boys who would have loved them. They get cards for the right reasons. Because they love the pictures, reading the backs and trading each other. I love watching them work out a trade. They are only 5 and 7 and the reasons they trade or want a particular card are hilarious.
June 15, 2009 at 12:06 AM

jacobmrley said…
My favorite thing is buying baseball cards at garage sales. Doesn't matter what it is. They all have a story - I have plucked mint 1977 topps Dale Murphy rookie cards and 1989 Topps Luis Medina rookie cards with rounded corners and creases, and i enjoyed both ends of the spectrum, because i like to think about what kind of person owned these cards, what they did with them, etc. It also helps that I am a helpless collector and pack rat, but you know what I am driving at...
June 18, 2009 at 1:00 AM