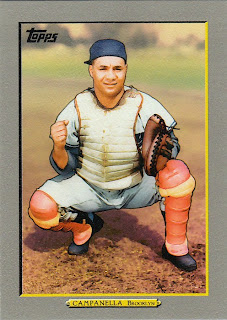 I like this Turkey Red card a lot. Zach of Autographed Cards sent it to me. It's one of those insert cards that are in random packs of 2009 Topps.

I've mentioned before that I don't like Turkey Red as a set all that much. The originals -- 1911 T3 -- are masterpieces, much larger in size. And when the card size and image is shrunken down, the appeal is lost on me. Topps was already issuing its Turkey Red sets by the time I got back into collecting. And when I finally saw some of the cards -- bought in a repack box or something -- it didn't interest me.

Some of the cards looked awfully dark, like the players were on the moon. And I didn't like some of the drawings, probably because Dick Perez was involved and I'm not crazy about his artwork. Never was. Some of it is cringe-inducing.

But these cards from 2009 look much better. The art work is more appealing. The photos are lighter and brighter, the background is less obtrusive, and I agree with those who say Turkey Red works better as an insert. All you had to do is follow the recent Turk-Off between beardy and motherscratcher to get an idea of what Turkey Red Overload is all about. For some reason, the cards are overwhelming in large quantities.

So, Topps, whatever you did this year, it was the right call. Because you've finally given me a Turkey Red card I can appreciate.

Anonymous said…
I think one of the reasons this particular card looks so nice is that Roy is in a crouch and fills up the entire frame, projecting depth beyond the player and to the card.

On the cards where the player is just standing the cards don't have that same "fullness" - too much of the background is showing, creating an illusion of flatness to the card.

Anyhow, I agree that this years issue is very nice and the above interpretation just might make me a gas bag!
June 1, 2009 at 8:28 PM

beardy said…
I am officially Turked-out.

School is out at the end of the week in these parts. ]]relief[[