Cleaning off the cabinet 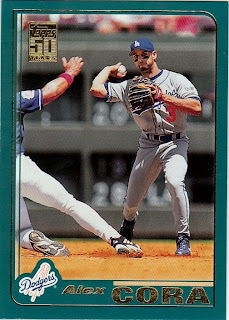 Most of my cards that have not been filed away are sitting on top of the left side of a cabinet that houses our TV, stereo, etc., in the living room. The stacks of cards in the back are from packages that I have received recently but have not posted yet. The stacks in the front are for trades going out that either aren't quite ready or I just haven't gotten time to package them up yet. Then there are the cards like '09 Topps and '09 Heritage that sit waiting for a binder.

So there's quite a bit going on in a small area, and during times like these when I've been receiving cards in the mail almost every day, I run out of space. So, it's time to clean up the clutter, and there's no better way to do that than with a massive trade post.

I'll be featuring cards from Saints of the Cheap Seats, Padrographs and Tribe Cards. All were supergenerous. Dan sent me 2 separate packages in a matter of weeks. Rod sent me cards and I'm still trying to figure out why. Just because, I'm guessing. And Tribe Cards is in the midst of one of his many giveaways.

I'll start with Dan first. He sent me several 2009 Series 2 needs, including this one: 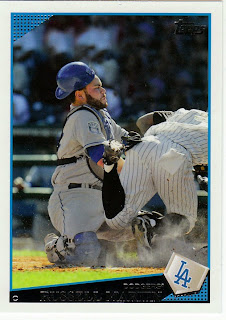 Topps is trying hard to duplicate all the great cards of Russell Martin from 2008. This is a good one, but not as good as last year. Too much dead space at the top of the card.
Martin's struggling at the plate this year, which is disappointing in a couple of ways. One is I was going to do a Martin-McCann comparison to defend Russell J.'s honor against dayf's scurrilous campaign to boost McCann at the expense of Martin. But I think I'll shelve that for a little bit. 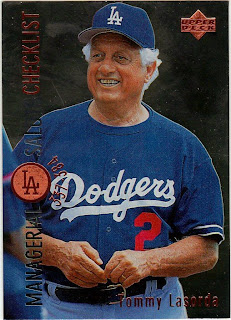 I only show this Upper Deck checklist card of Tommy Lasorda to point out how long his hair is. I do not remember Tommy ever needing a barber. 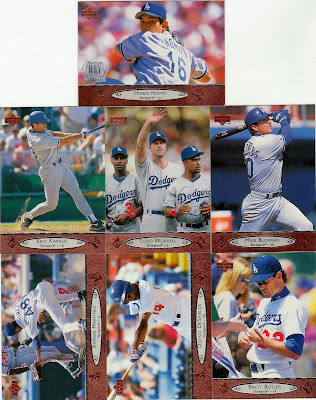 A whole mess of 1996 Upper Deck. I never liked these cards. But when you put them together the glittery gold bottoms look snazzy. 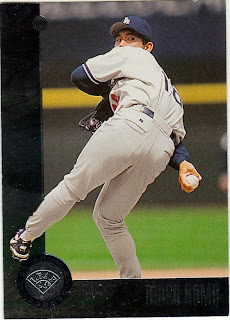 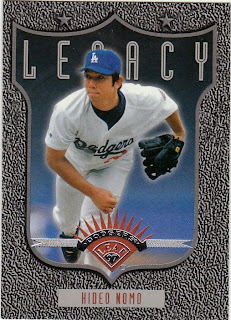 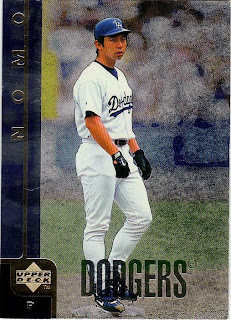 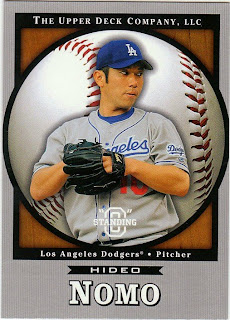 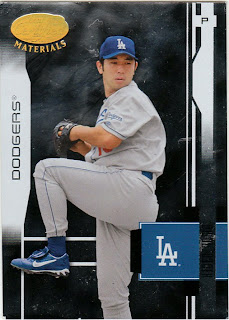 I thought I'd show most of the Nomo cards that Dan sent. I don't even think that's all of them. I love getting Nomo cards in trades. The one where Nomo is standing on second base after hitting a double is probably my favorite, just because he looks like a typical pitcher out of his element on the bases. The last Nomo card is a sample card, which is always cool. 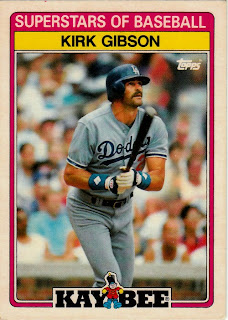 Here is a 1989 Kay Bee Toy odd-ball card of Kirk Gibson. It sort of looks like this year's Upper Deck OPC set doesn't it? 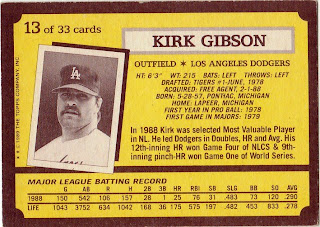 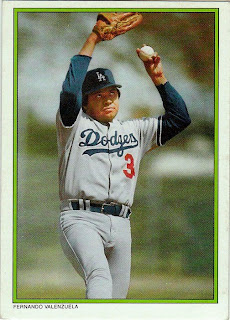 Fernando here is about to begin his wind-up by rolling his eyes upward. It looks a little creepy. 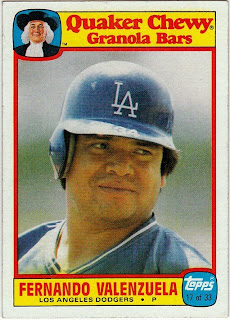 And this instantly becomes one of my favorite oddballs ever. "Quaker Chewy Granola Bars"? That reminds me of the sponsorship of NASCAR races. My personal favorite was the "Pork the Other White Meat 400" 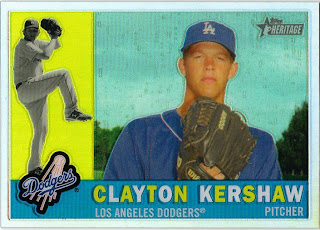 Lastly from Dan, I'll show a refractor '09 Heritage card of the hero of last night's game, Clayton Kershaw. This is No. 544/560. Very nice of Dan to send this of one of my favorite players. Thanks, Dan! 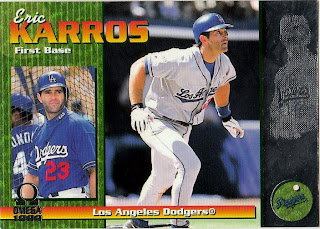 Up next are some cards from Rod of Padrographs. Rod sent a bunch of Pacific Omega Dodgers. I have none of these cards because I didn't collect at all during the late '90s.
Am I the only one that make weird, unrelated connections between cards and other things in my life? These cards remind me of the wrap-around porch at my late grandmother's house. Weird. I think it's because the green background resembles the covering on one of her lawn chairs. Fascinating, huh? 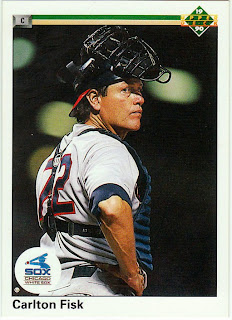 This is one of the better night cards that you will see. It's a great shot of Fisk with the blurry glow of lights -- from the scoreboard, perhaps? -- in the background. 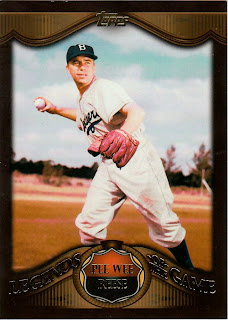 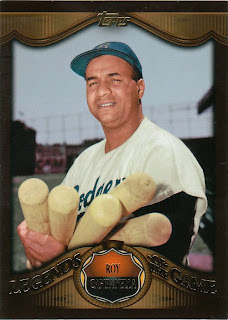 Two Legends of the Game cards of two of the best in Pee Wee and Campy. The Campy card always seemed off to me when I saw it on the blogs. Now that I see it up close, I can tell what the problem is. His cap appears to be completely drawn for some odd reason. 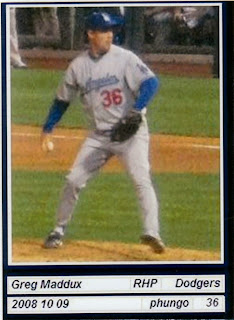 Hey! Wait a minute. I have this card already! Rod sent me a Phungo Card that I already own. I have a duplicate Phungo Card! That's a first. 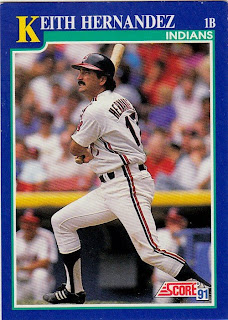 Finally, I have some Indians cards sent by David at Tribe Cards. That's right, I said Indians. David is giving away team gift packs to those who ask. I have my reasons for wanting Indians, but one of them is I am a set collector and you never know what cards you might get to complete a set.
Here is one from 1991 Score that I have a super, super, super minor interest in collecting (don't start sending me these things). I show it only because I have no memory of Hernandez playing for the Indians, probably because I was in my first year of a job in 1990, spending the whole time hoping my psycho boss wouldn't fire me. 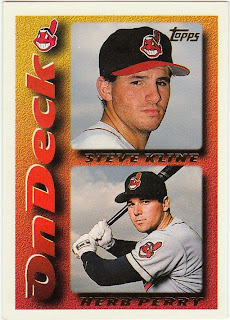 Both of these guys played for the Class A Watertown Indians, which means I probably saw both of them play live in person. 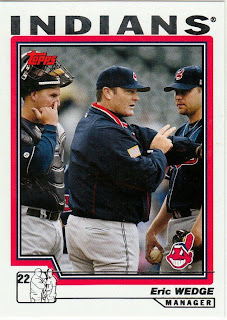 I am quite certain they could have gotten a photo of Wedge in which I wouldn't have to question what the catcher was doing with his finger. 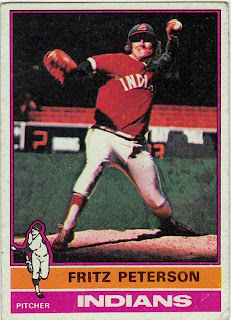 Now, here we go. I am collecting the 1976 Topps set and this card is in much better shape than the Peterson that I have. 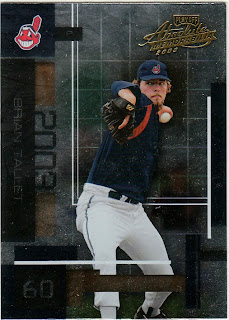 Here is my man Brandon Tallet. I haven't caught any Blue Jays games lately, so I don't know if he's still sporting the throwback look. 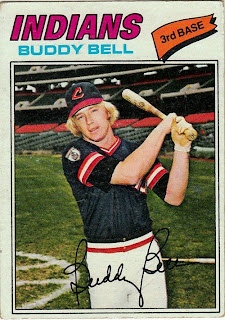 Finally, a 1977 Topps card of Buddy Bell. Getting cards from 1977 are very cool, because it's a set from my childhood that I haven't tried to upgrade or complete. So every card I get from that year is like a flashback.
Many thanks to David and everyone else. There is now a little more room on the cabinet. But I received two more packages in the mail today ...

dayf said…
I just found this post while looking for the name of your childhood trading partner. Here's what I have to say about my 'scurrilous campaign"

Of course one of them went to the playoffs and the other went home, so maybe I should shush a bit and keep looking for that name...
November 3, 2009 at 11:16 PM