The good, the bad, and something wildz 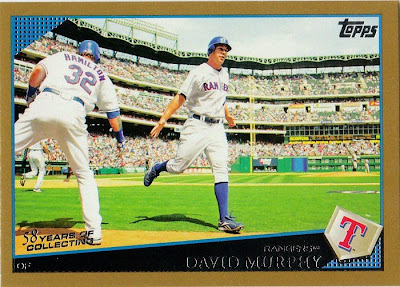 I haven't gotten around to tracking down candidates for the "best card of 2009" yet, probably because there are so many cards that I like, and also because singling out the worst cards of '09 is so much gosh durn fun.

But the card above is a definite "best card" candidate. I have seen this card on the blogs and everyone has something good to say about it. I kept hoping to pull it, and although I haven't pulled the regular version yet, I did get the gold-bordered one today, so I'm quite pleased about that. (Gold has been overdone on cards for years and should be done away with, but the fact that they made this card more difficult to pull, coupled with it being such a nice photo, makes me happy).

This card demonstrates, as close as it can, an "at-the-ballpark" moment. You can visualize having really good seats and watching the exchange between Josh Hamilton and David Murphy while taking in the expanse of The Ballpark at Arlington (I think it's still called that, right?). It's as "you are there" as you can get.

This will definitely be one of the best cards at the end of the year. I can feel it. So there you go.

But just in case you thought I had gotten soft, here is "Worst Card of 2009" candidate numero ocho: 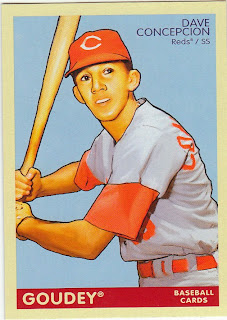 (*noise you make when opening up your outdoor garbage can and discovering maggots crawling at the bottom*) You knew this was coming didn't you? I knew it was coming. It was just a matter of getting my hands on the card.
You could blow this card up poster-size, put it on a child's wall, and give the poor kid nightmares until adulthood. There is not one thing about Concepcion's image that appears real. He is the king of the Goudey plastic pod people.
But you've all seen this and everyone's characterization, so I'll end things quickly and move onto another package I received recently. This one is from Mike of JD's Wild Cardz, a relatively new blog from a relatively new collector who is eager to learn and busting cards all over the place. Mike likes the Sawx, so I've added him to the list of Sawx collectors I have the pleasure to know.
I'm fresh out of Red Sox as a couple of packages to Boston lovers are going out in the mail shortly, but as we all know there are almost as many Red Sox cards as there are cards of Carlos Lee. So I'll be replenishing quickly.
I received a smattering of key L.A. Dodgers. I'll show four of them here: 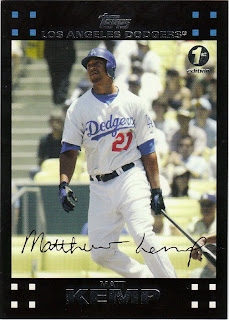 The first is a 2007 Topps hobby edition "first edition" Matt Kemp card. Apparently, Topps has been doing this first edition thing for a few years now. I just found out about it when Cards on Cards posted some 2004 versions of the cards. I thought no company in their right mind would annually offer a variation set in hobby form that differs only in the teeny tiny silver foil stamp on the front. Wrong again. 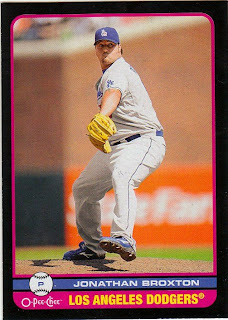 Next is a black-bordered variation Jonathan Broxton from the 2009 O-Pee-Chee set. This was the first Upper Deck '09 OPC card I saw in person until I bought two packs of OPC today (I haven't been in a Target in two whole weeks, so all the OPC I had seen were on the blogs).
I have my own thoughts on the set. They're not terribly different from anyone else's or as detailed, but I'll be mentioning them soon. So get your popcorn and Colt .45 malt liquor and sit yourself down for that. 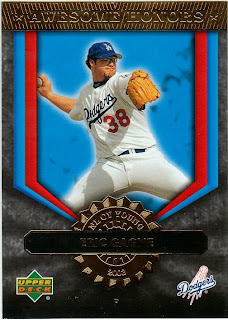 A 2004 Upper Deck "Awesome Honors" card of Eric Gagne. Gold foil all over the place. I've never seen this subset/insert/whatever it is before. I imagine this was a hobby issue? Or maybe an insert in the 2004 base set? I wasn't collecting current cards then. 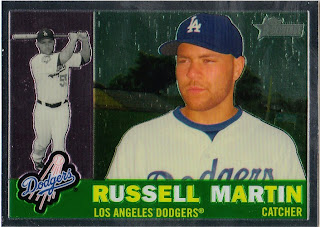 Finally, a 2009 Topps Heritage chrome card of Russell Martin, who has all of 1 home run this year. You're shiny, Russell! Play like you're shiny! Come on, man.
Many thanks for the cards, Mike. Welcome.

Anonymous said…
That Murphy card had me feeling all warm and fuzzy inside...until you threw a cold bucket of water known as 2009 Goudey Dave Concepcion. Aaahh!!!
June 26, 2009 at 9:32 PM