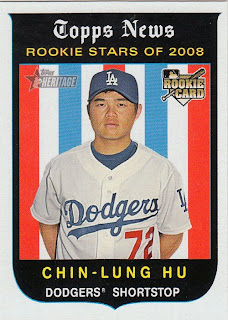 Look how sad Chin-lung Hu seems. We forgot about him, didn't we?

In the hullabaloo over Rafael Furcal's return to the Dodgers' starting shortstop position we were focused on other things. We were too busy learning about:

1. What a term sheet is.
2. That asking for a signed copy of a term sheet is akin to writing your name in blood, agreeing your sworn allegiance to playing for the team sending said sheet.
3. That the agency handling Furcal's negotiations, headed by agent Arn Tellem, was despicable, disgusting and unprofessional. And because of that Braves management is picking up its sandbox toys, going home, and never playing with Tellem ever again. Oh, and Tellem has cooties, too.

Essentially, I agree with this assessment. Business is business. It can be ugly and often-times operates below the belt. Maybe some things happened here that normally don't happen in contract negotiations. But until you have that signature on the contract you assume nothing.

But here I've forgotten Chin-lung Hu again. What about him? I don't know what the Taiwanese word for "miffed" is, but I'm assuming he's a little bit of that. Hu was the Dodgers' 2007 minor league player of the year. He's an outstanding defensive shortstop. He hit only .181 last season, but missed a lot of time with an injury. 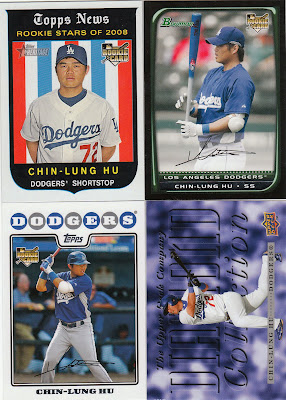 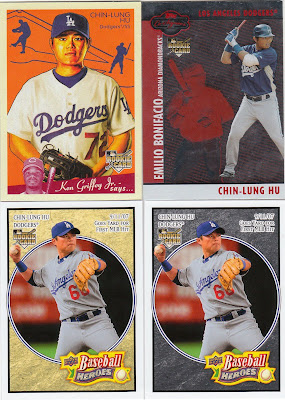 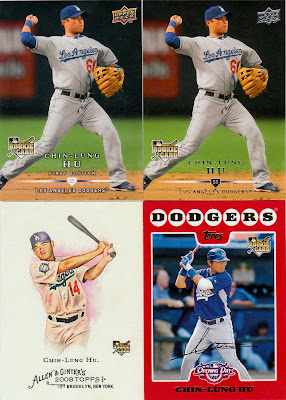 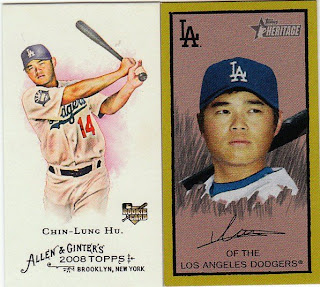 I know there are many others.
Do you think that when Hu learned the Dodgers were going to pursue another shortstop, he argued his case by saying, "but look at all the CARDS I had this year?" (Do you think any player does that?). Hu may have had more cards issued this year than Furcal, an established veteran.
Of course, Hu's number of cards have more to do with the fact that he possessed the "it" factor going into 2008. He was a rookie, he is only the fifth player from Taiwan to make the major leagues, and he has the shortest last name in major league history. That's why Topps and UD shoe-horned him into so many sets.
Right now for Hu it's a lot more style than substance, and that's why Furcal is back. We didn't forget you Chin-lung. We just want you to do better.

dayf said…
If you love Arn Tellem so much, why don't you marry him? :P

If the Dodgers are forced to move Hu to first base then this whole sordid affair will have been worth it.

madding said…
I have to side with the Braves on this one. I wouldn't want to do further business with sneaky underhanded agents either.

My Dodger-loving friend sporadically would IM me messages like "HU LET THE DOGS OUT" early last season.
December 20, 2008 at 1:30 AM