December 28, 2008
To recap, this is where I review some of the cards that I have bought over the past two months. It's kind of a retrospective of what the card companies were putting on the retail shelves in 2008. I tried to pick up a pack of as many brands as possible.

I am giving away all of the packs that I bought. What you need to do in order to win the cards is take a look at the list of cards purchased along the sidebar, under "Win These Packs!" Guess which card I pulled first from each pack, guess which pack I bought first and guess which pack I bought last, and then leave a comment with all your guesses on this post or on this post. The person who guesses the most "first cards" wins all 120 cards.

What I'd like to do now is count down what I think are the worst of what I received in these packs. Some of the comments will be common complaints expressed by collectors about 2008 cards, but most are just my pet peeves. I hope these cards don't prevent you from entering the contest. Because the "best of the packs" countdown is coming up tomorrow. So, anyway, here is the worst, from the least of the worst to the worst of the worst: 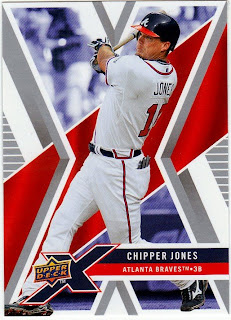 15. Chipper Jones, Upper Deck X. There is nothing wrong with this specific card. Chipper is just serving as the poster child for the whole disaster of a set called Upper Deck X. I know I'm not the first to say this, but the letter they should have selected is "Y," as in "Y" oh "Y" was this set made? 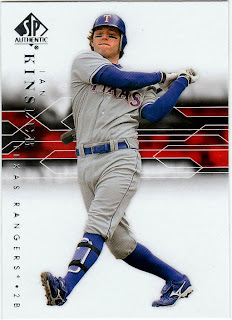 14. Ian Kinsler, Upper Deck SP Authentic. It's time to put this brand to bed, too. Nothing about it intrigues me. And this is a lousy shot of Kinsler. I'm sure the ball is in the catcher's mitt. 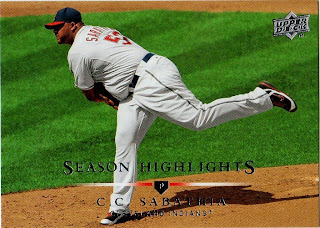 13. CC Sabathia, Season Highlights, Upper Deck Series 2. Upper Deck photography can do a lot for a card, but it can kill an out-of-shape athlete. Look at that gut! They say any ballplayer looks good in Yankee pinstripes. Sabathia will test that theory. 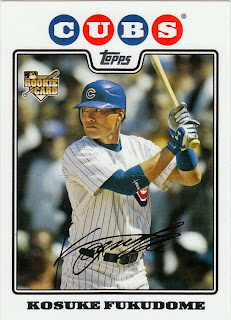 12. Kosuke Fukudome, Topps Updates & Highlights. I don't know all of the people to blame for the reason that I heard SO MUCH about a guy who hit .257 with 10 home runs. But I do know the card companies, particularly Topps, are at the top of the list. 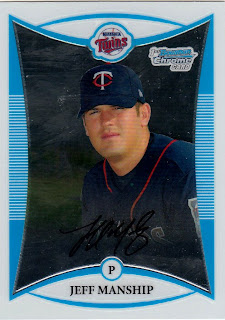 11. Jeff Manship, Bowman Chrome. You hear a lot about Bowman Chrome and Bowman's "Home of the Rookie Card" claim. But I've never heard anyone comment on the design for these "1st card" subjects. Who came up with this design? It's awful. And the color didn't work with 1992 Donruss, so why use it again? 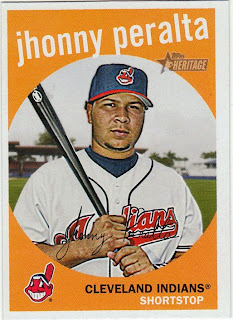 10. Jhonny Peralta, Topps Heritage. It pains me to see a Heritage card on the "worst" list, but I have to do it. Peralta represents the most frustrating part about collecting Heritage. The set has so many short-prints, that when you finally, FINALLY get a short-print and then instantly realize that you, ugh, ALREADY HAVE IT, like Peralta here, it makes you want to whip the card across the room (not that I've done that). 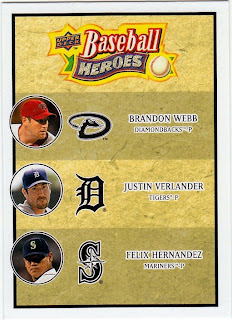 9. Webb-Verlander-Hernandez, Upper Deck Baseball Heroes (I don't even know what to call this card). The random grouping of players here is UD's answer to Topps' Combo cards. The tie-in for these three players? They're all pitchers, they're all, sort of young, I guess, and they all have enjoyed varying success. That's about as wishy-washy a pairing as you will find. Stop wasting my time, UD. 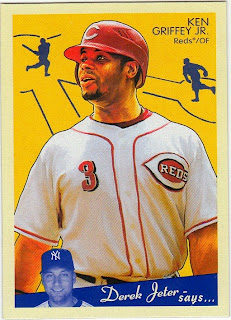 8. Ken Griffey Jr., Upper Deck Goudey. Lots of collectors like this set. For me, the fact that some of the paintings are not accurate likenesses of the players they portray killed any thought I had about collecting this set. Griffey is such an example. 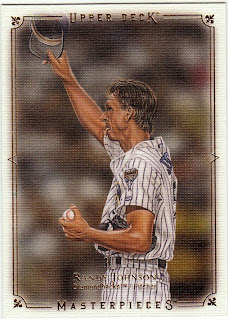 7. Randy Johnson, Upper Deck Masterpieces. (Johnson is attempting to play for every team that I despise, by the way). Here's the Masterpieces example of what I mentioned with Goudey. Johnson looks older than his 45 years -- a LOT older. 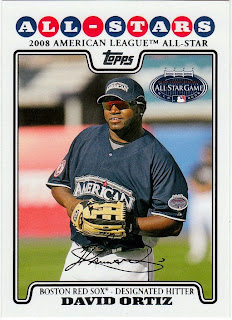 6. David Ortiz, All-Star, Topps Updates & Highlights. I know some of y'all like this. Me, not so much. The All-Star cards just take a spot away from some other players who don't get a card all year. And if you're going to feature an EXTRA card of Big Papi, get something a little more exciting. This looks like I took it with my disposable camera purchased at "Pharmaceuticals and Beyond." 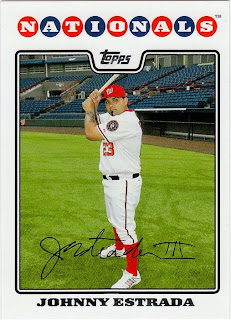 5. Johnny Estrada, Topps Updates & Highlights. Pssst, Johnny, I say this because I care: you look like a fool. 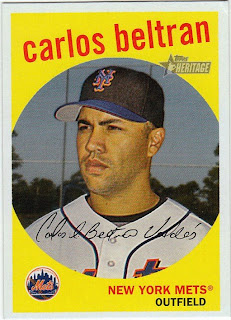 4. Carlos Beltran, Topps Heritage. 2008 has to be a record year for pulling damaged cards from packs. So many corner dings! Mr. Beltran's upper right corner is not mint, shall we say. To the person who wins these cards, I apologize for the damaged Beltran. 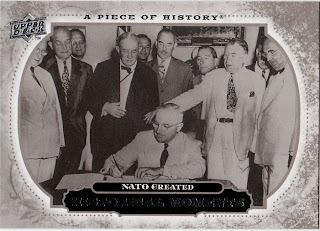 3. NATO Created, Historical Moments, Upper Deck Artifacts. These Artifact cards bore me to tears. I'm not against history or learning. I love Allen & Ginter as you all know. But somehow an A&G card of Annie Oakley works. This does not work. It reminds me of sitting in my 9th grade history class, trying desperately to stay awake. 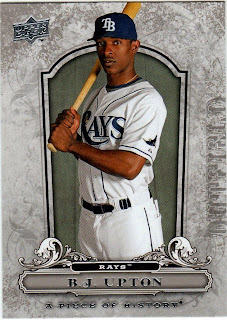 2. B.J. Upton, Upper Deck Artifacts. If you ask me, Artifacts should get the heave-ho before X. At least X is colorful. This is just plain pointless. Way to dull down an exciting player like Upton. 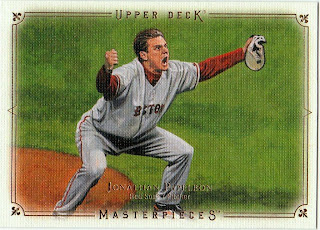 1. Jon Papelbon, Upper Deck Masterpieces. Ugh. Yes, Papelbon is excitable. Yes, he can be obnoxious. Yes, he has struck this pose a time or two. But did you have to make him look like a screaming, crapping leprechaun for all eternity?
Well, I sold those cards, didn't I? Yet, I bet some of you still want them anyway, don't you? So go ahead and leave your guesses. The good stuff is coming up tomorrow.

Goose Joak said…
Very amusing to say the least! Completely with you on the Heroes montage, or whatever we can call it.
December 28, 2008 at 5:14 AM

madding said…
Wow, I had not seen that Randy Johnson card before. It looks like he just threw out the first pitch at a game in like 2032.