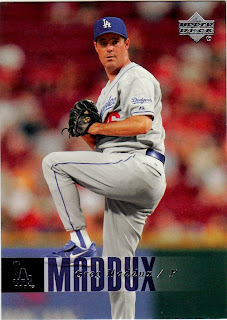 Actually, the Dodgers aren't doing much of anything, but I'm hoping that by slapping that title on this post, somehow, though the magic that is the Christmas season (c'mon, you've all seen "The Polar Express" haven't you?), Ned Colletti will get wind of exactly how urgent things are and get off his BUTT and find a pitcher or a backup catcher or an assistant clubhouse towel boy, or something. Just make yourself useful, sparky.

As everyone knows by now, Greg Maddux did decide to do something and retire after 22 years of excellence. It doesn't surprise me. I expected it. I'm glad Dodger blue was the last uniform Maddux wore, even though he did his best work with Atlanta and Chicago. I always enjoyed Maddux on the mound. He was a right-hander, but he pitched like a lefty, and you know how I feel about left-handed pitchers. 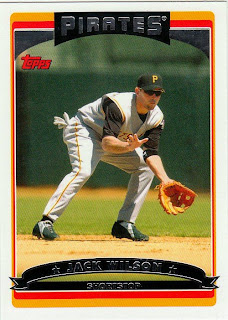 On the acquisition front, the only semi-concrete (what would that be, semi-hardened cement, I guess?) news came Thursday. According to the Associated Press, the Dodgers have been talking at length with the Pirates about acquiring starting shortstop Jack Wilson. This was something the Dodgers were supposed to do in the middle of last season.

I suppose if the Dodgers aren't going to re-sign Furcal, then Wilson is about the best that can do. I'm just not all that intrigued. Wilson's good defensively, which is a plus, but he's meh at the plate. I don't see another 2004 season coming from him. And if the Dodgers end up with Wilson, I certainly don't want another 2008 out of him. Maybe I'm letting the Pirates' last 15 years of succitude cloud my perception of Jack.

Meanwhile, Furcal has rejected the A's offer, according to a Fox report. I'm not sure where that leaves Furcal. The Giants have signed Renteria and the Cardinals have signed Khalil Greene (odd move). I would guess that leaves the Braves as the only team aside from the Dodgers for Furcal (maybe I'm forgetting a team, though). So maybe Raffy IS staying. 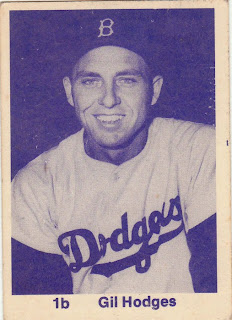 Finally, the Veterans Committee will be announcing its selections to the Hall of Fame on Monday. Apparently, Ron Santo, Gil Hodges, Joe Torre, Dick Allen and Jim Kaat are the top candidates. Three of those guys -- Hodges, Torre and Allen -- have Dodger connections. I've already said a few times that I think Santo and Maury Wills are the best candidates available. But I certainly would be happy if Hodges made it.
Here's hoping for some good news Monday -- from the Hall and on the trade front.

Dinged Corners said…
From that top list, we must have Hodges....

It's been interesting to learn more about the Dodgers roster because of the new Albuquerque connection.
December 6, 2008 at 7:58 PM

Anonymous said…
Don't forget that the Twins have broken off talks with Casey Blake, and it's not as though there's a huge demand for Manny right now.

It'd be very amusing if all the Dodger FAs came crawling back! Not that I really want Blake back anyway, but Manny and Furcal would be very nice.
December 7, 2008 at 2:12 PM