Procrastination, I know you well 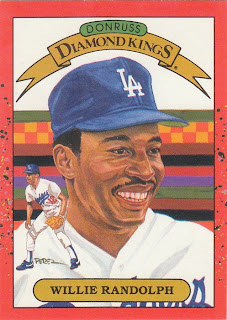 I've been known to put off the things I need to do from time to time. I'm a pretty responsible guy, but I have a procrastination streak that strikes whether I'm at home or at work, and in virtually every aspect of my life, from the mundane to the "life and death" issues.

So it is with this blog. I get behind in posting trades, in posting posts that I promised to post (that's a tongue-twister), in posting regular features. For example, I skipped a night card feature this week, although I can't be blamed for that. It was Christmas Eve.

So it's good to know there are others out there with the same issues that I have. The Writer's Journey is a great blog that I believe began as one man's attempt to chronicle the process of writing his first novel. But JT admits that the site more accurately reflects his avoidance of writing his first novel. You see, JT is not only into writing, but into rock n' roll and baseball. That's a trifecta I can definitely get behind. So I understand how he can procrast ... er, get sidetracked.

JT proposed some team trading in an effort to accumulate a bunch of cards of his favorite team, the Reds. He had a bunch of takers, including me. I received my Dodgers a few days ago, and I'm getting around to showing what I got. I guess a few days delay, with a major holiday in the middle, isn't really all that bad. So I'm not going to call it procrastination. Maybe amateur crastination :P.

I received 117 Dodgers. I needed about a third of them. I also received a couple other cool items, including a print-out of a "card" that JT created of my favorite player, Ron Cey. 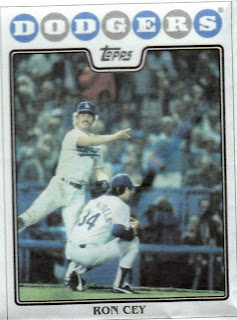 That's pretty terrific. I'm guessing that photo is from the 1981 World Series. If you want to see the card in a better light, along with a great Steve Garvey "card," click here. 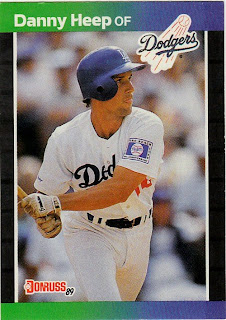 This is the last card I needed to complete the 1989 Donruss Dodgers team set. Danny Heep! Who would have figured? I still need a couple of the traded cards, though. 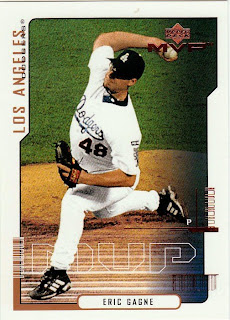 Eric Gagne, 2000 Upper Deck MVP. I believe this is a "night card," which is always cool. 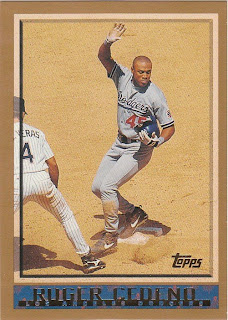 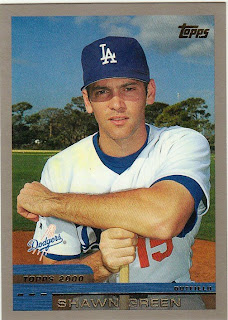 Shawn Green, 2000 Topps. This is the photo that was used to create the 2001 Topps Gallery Green card that I just featured on my last post. The forearm doesn't seem quite as apparent here. 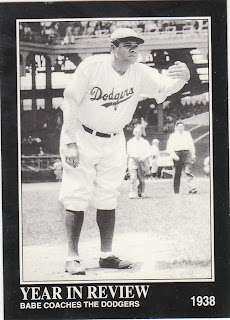 Even cooler than Waner in a Dodger uniform? Babe Ruth in a Dodger uniform! From a series of Babe Ruth cards from 1992, which I didn't know existed. I like the write-up on the back explaining how Ruth was hired as a coach purely for publicity purposes. It features quotes from Ruth, as well. 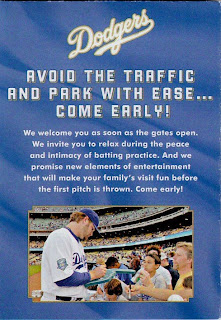 JT also threw in a Dodgers pocket schedule from the past season. I think it's only the second Dodger pocket schedule I have. I chose to display this part of the schedule, which shows the Dodgers desperately trying to get their fans to come out to the ballpark earlier. "Avoid the Traffic and Park With Ease ... Come Early!" Yeah, good luck with that.
Dodger fans are notorious late arrivers. I guess they're just procrastinating, right?
Meanwhile, I'm attempting to get Reds together to send to JT. I'm trying not to blame it on procrastination. It's the holiday! Really! I swear.

Sooz said…
I am really good at coming up with ideas, but terrible at carrying them out.

Anonymous said…
Glad the cards arrived and filled a few holes in your collection.

Guess what I'm doing now...avoiding writing my novel. It's open in another window, but I decided to blogsurf for "a few minutes" about an hour ago.