Late to the party, again 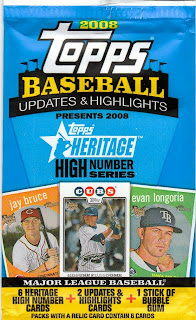 In the process of Christmas shopping yesterday, time suddenly stopped as I watched myself buy a blaster of the ridiculously long-titled Heritage high number series. It really was kind of an out-of-body experience, for three reasons:

1. I had made a vow not to buy any blasters until after Christmas. 2. I've been warned by multiple bloggers that the "2008 Topps Baseball Updates and Highlights presents 2008 Topps Heritage High Number Series," or TBUHPTHHNS for short, was a disappointment and a fiasco. 3. I'm still trying to collect the low numbers, so why take on this project?

A day later I have no idea why I bought it. I guess to serve as a four-weeks-too-late public service announcement. And that announcement is, buy Stadium Club or Masterpieces (although you may get that freakin' Whitey Ford card for the ninth time), or A&G if you're still working on that. Or get your kid a Christmas present. Because I could've done that Wednesday, and now I'll be doing it tomorrow.

Still, there are cards to show. Here goes nothing: 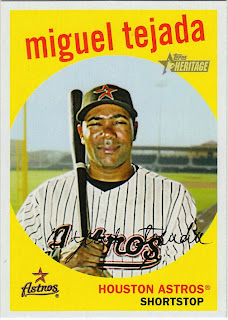 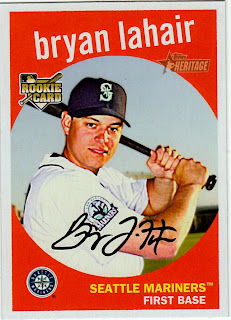 #566 - Bryan LaHair, Mariners. He had 136 at-bats last year and is apparently the reason why Seattle got rid of Richie Sexson (well, one of the reasons), but I had never heard of him. Seattle is such an outpost. What is that line New York Giants manager Bill Terry said about Brooklyn, "Are they still in the league?" 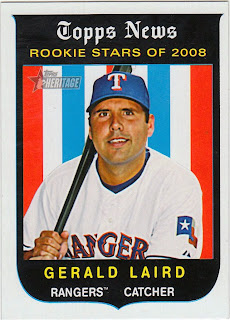 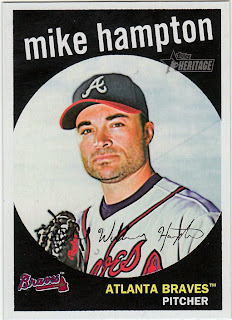 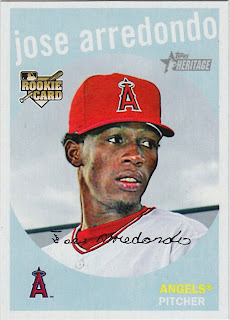 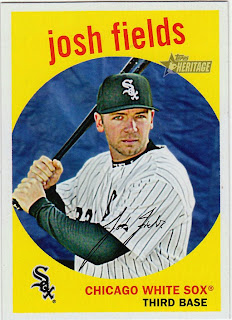 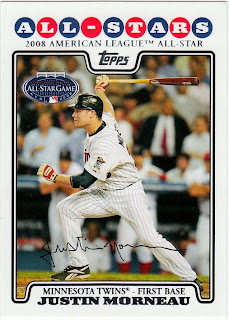 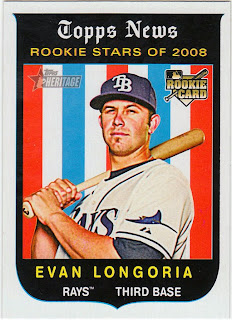 How long before they make Longoria an official spokesman for Topps? I say we see his picture as the sole representative on the wrappers of 2009 Topps Series 2 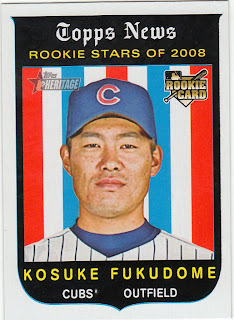 #580 - Kosuke Fukudome. I know some people are pulling Fukudome cards like weeds, but this is my first. Well, kind of. But you'll have to stick around for the year-end countdown for that. 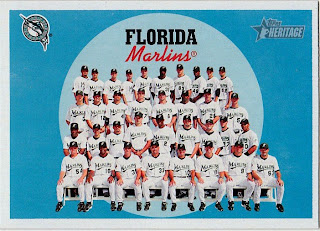 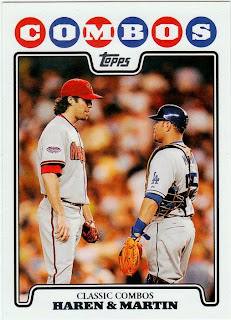 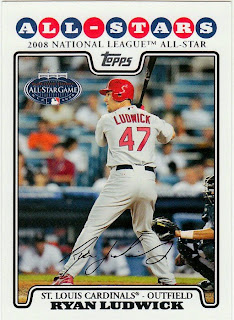 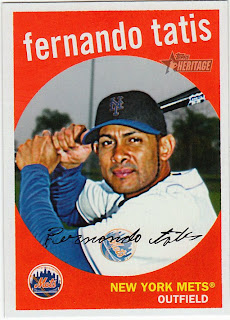 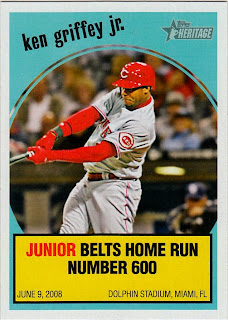 I don't think you need to recognize this achievement in two different sets. It's cool in Heritage. Not so much in U&H. 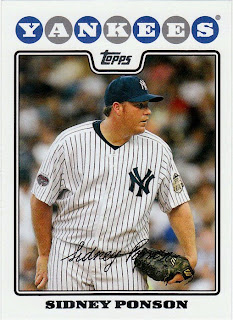 UH #182 - Sidney Ponson, Yankees. Do you think the fact N.Y. started this guy last year had something to do with the almost panicky way in which the Yankees corralled Sabathia?
UH #268 - Alfonso Soriano, All-Star
PACK 7 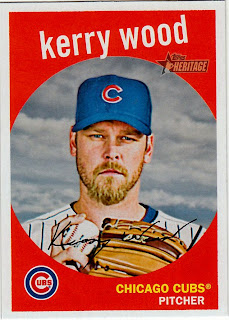 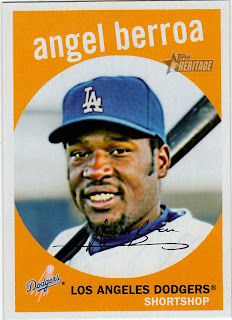 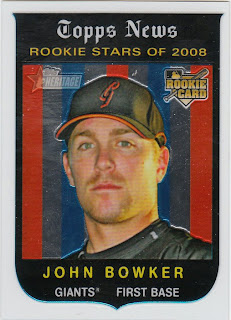 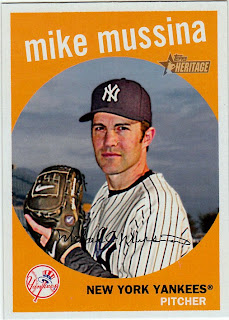 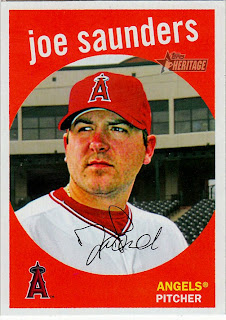 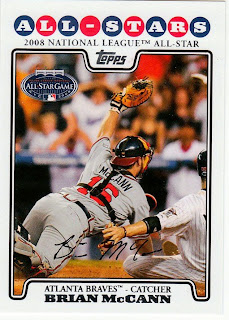 U&H 226, Brian McCann, All-Star. Everytime I see photos like this, I can't help but think how much better the photo would look if the camera was pointed at the player's FACES.
U&H 210, Joe Saunders, Angels (*facepalm with the other hand*)
There you go. I guess it's not too bad of a box if you go in knowing what to expect: a lot of nobodies, a lot of rookies and a lot of U&H cards that nobody wants. I'm actually a fan of the nobodies, who at least have established themselves as major leaguers. I'm just not interested in the rookies, which is why I'll never buy Razor products and have only faint interest in Bowman.
And then there's the gum. After reading both positive and two negative reviews of the new gum, I tried some. I have to say, I agree with dayf and morineko, although I'm not as vigorously against it as they are. When you first put it in your mouth it's OK, but after a couple of minutes, you begin to become aware that it has a consistency that isn't really gum-like. Then you get this taste in the back of your throat that I can't really describe, but it's kind of a sickly-sweet burning sensation. Meanwhile in the front of your mouth, the taste is now cardboard. I've never been so aware of the gum I was chewing since I was about 10. It's definitely not an improvement, I'll tell you that.
So, in short, I won't be buying anymore of this. I'll happily go back to my low numbers. I'll get back to you when I complete that. Sometime in 2014.

Captain Canuck said…
you can NEVER get too many Braves.

madding said…
I'm getting a blaster of this on Saturday or Sunday. I just feel like I'm forced to. If only they hadn't made the set a continuation of the regular set. Plus, there's lots of Cardinals in the checklist (although half of them are SPs I think.)

It looks like they really screwed up the rookies, though. The whole thing feels kinda rushed. In the regular series, if I'm not mistaken, all rookies had the "Rookie Stars" design but in this series some rookies do not, and then you have that Gerald Laird card... strange.
December 12, 2008 at 1:17 AM

Dave said…
I really like Heritage High Numbers, and as you noted, I like the gum too. Burning in the back of your throat? Wow. My gum has been absolutely fine. I've been chewing and enjoying it every day! That Laird card is very messed up though.
December 12, 2008 at 2:50 AM

dayf said…
I have Hampton too and the letters are white. I'm pretty sure the only variation they did in Heritage is the black backs. I'm not buying a blaster. I figure in a few months I can buy a hobby box for $40 or less and get a box topper and a relic. I'm not bothering with he SPs in this set, although I think I'll eventually get the base cards just for continuity's sake.

And thank you. I'm not the only person who tastes that weird aftertaste occasionally right on the back of my tongue. I'm NOT going crazy, at least not because of the gum.
December 12, 2008 at 4:17 AM

If the Griffey U&H card wasn't part of an endless series of U&H "accomplishment" cards that include all-star nominations, HR derby participations, random "big moments," (i.e. walk-off HRs,) then I wouldn't mind the accomplishment being in two sets. But in U&H, all that extra stuff, plus the "combo cards" just seems to take the place of more substantial stuff -- like cards of middle relievers, role players, managers, etc.

zman40 said…
Would you have any interest in trading the Soria from the first pack? I'm sure I could round up some Dodgers from your want list for you.
December 13, 2008 at 12:46 AM