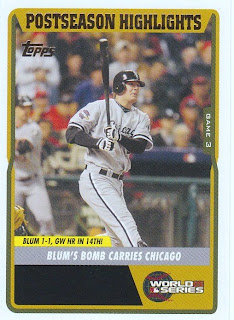 In some corners of this great nation of ours tonight, there is much wailing and gnashing. Milwaukee, for example. Boston, too. Tampa Bay. Baltimore. Los Angeles. Possibly even Cleveland, although I think they already wailed and gnashed a few months ago.

Yes, CC Sabathia is a Yankee. As a Dodger fan, and therefore a card-carrying member of the "Society of People Who Use the Words 'Evil' and 'Yankees' Together in Too Many Sentences," it's a dark day. But I won't say it's a black day. More like a shrug-your-shoulders-gray day. More like, "yep, the Yankees got another one. What else is on the tube?" (To me, the most disturbing thing about hearing the news Wednesday was learning that Brian Cashman watches MTV's Cribs. Huh?)

I'd even guess that a lot of fans who root against the Yankees felt the same way. And I think that's because the Yankees haven't been in a World Series in five years and haven't won one in eight years. Fans have come to realize that just because you add a Randy Johnson or Johnny Damon doesn't mean you're winning the Series. Throwing obscene amounts of cash and crazy numbers of years at top talents does make it difficult for teams like the Rays and Orioles and Blue Jays, who must go head-to-head with N.Y. and Boston in the AL East. But it doesn't make it impossible. And I don't think it's going to be another 12 years before someone besides the Yankees or Red Sox wins the AL East.

So, to those who are discouraged after Wednesday's news, a little list:

Geoff Blum (who hit that epic 14th-inning home run for the White Sox in the 2005 World Series, shown above in this week's night card) has won a World Series ring in the last eight years. Alex Rodriguez hasn't.

Chin up guys. And to the Yankee fans -- nice work. But I think you're aware by now that the job isn't done. It's just begun.

Steve Gierman said…
What an awesome night card! I remember that 1 AM moment. It was one of the best feelings that year. That is, until it was topped less than a day later.
December 11, 2008 at 1:16 AM

Eric Stephen said…
At least Abreu can still see out of both eyes.

Even though I knew the Dodgers would never sign CC, I still hoped against the odds until the bitter end. Technically, the contract isn't finalized yet. :)
December 11, 2008 at 1:19 AM

Dinged Corners said…
A lot of semolians, but CC won't help them. He'll be off his stride again. And the Yankees will remain off their stride for a few more years, no matter the tens of millions of bazillions they (so to speak) may throw at the problem.
December 11, 2008 at 1:24 AM

Laurens said…
Your words ring so true, but I'm afraid one of these years A-Rod will be holding up a WS trophy thanking Madonna, his new found spiritual guide, while C.C. Sabathia is named the World Series MVP.
December 11, 2008 at 1:59 AM