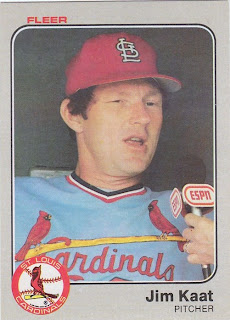 The Veterans Committee is scheduled to announce later today which former players they have elected to the Hall of Fame. Jim Kaat is on the short list, but I don't think he's going to be one of the players named.

What I think would be cool is if Kaat eventually made the Hall of Fame as a player and then also was inducted into the broadcasters' wing. I always thought he was a dynamite broadcaster. He was the calm amid the bluster in the Yankees' broadcast booth (well, Ken Singleton is also calm), and I just liked his delivery. He was smart, professional, and didn't draw attention to himself. Even when he retired after the 2007 season, he left quietly.

That's more than I can say about some of ESPN's baseball broadcasters. Whether they are showing up on the air drunk (Sutcliffe), or spouting conspiracy theories (Thorn), or just considering themselves the most knowledgeable baseball men on the face of the earth (Morgan), ESPN's got a crew that couldn't carry the box that carries Jim Kaat's jock.

Which is why I find it so interesting that Kaat is being interviewed by ESPN in this photo on the 1983 Fleer card. I'm pretty sure when I pulled this card from a pack, I had no idea what ESPN was. The cable station was only four years old at the time and loads of people back then didn't even have cable. I know we didn't.

Maybe Kaat didn't know what ESPN was either when he granted this interview. But I'm sure he was pleasant just the same. He was at the end of his career in 1983, and I didn't get to see him play much. But he seemed like the model professional out there on the mound. A great pitcher and a fantastic fielder, too. As classy on the field as he was in the booth.

Maybe Kaat won't end up in the Hall as a player, but I do think he should be there as a broadcaster. That's where I was able to appreciate him the most, as he kept his distance from the "look-at-me" phenomenon that is ESPN. You stay classy, Jim Kaat, and I'll continue to appreciate your 1983 Fleer card.

Andy said…
This is the only card I've ever seen featuring a diamond engagement ring. Obviously the person holding the microphone is a woman, which explains why it looks like Kaat is looking down her blouse.
December 8, 2008 at 9:29 AM

Eric Stephen said…
I got a box of 1984 Fleer yesterday and the Johnny Bench card also features an ESPN mic. It looks like he is being interviewed by Chris Berman.
December 8, 2008 at 10:23 AM

MMayes said…
What I like is the old original ESPN logo. I think ESPN started out in '79, but I know we didn't get cable until '83, when I'd started college. I thought I was going to wet myself to have the opportunity to watch sports any time I wanted.
December 8, 2008 at 11:19 AM

madding said…
I bet Fleer didn't even know what ESPN was back when they put this card out. I can't see them giving free advertising to a mega-giant like ESPN is today.

Jim Kaat was about the only broadcaster that CBS had that I actually didn't mind listening to. (And yes, that includes Jack Buck, but that's a discussion for another day.)
December 8, 2008 at 3:38 PM