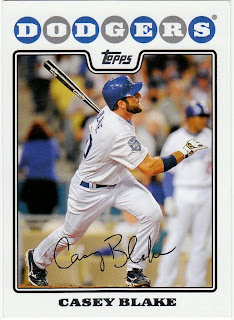 While Dodger fans fret and fume about who is going to start on the mound this year and whether L.A. will have a legitimate big bat in the lineup, GM extraordinnaire Ned Colletti is easing rooters' minds by focusing on, um, the infield.

Actually, the Dodgers do need some help in the infield. Put it this way: Colletti is getting the easy stuff out of the way first.

The Dodgers have re-signed Casey Blake (thanks for the card, John A!) to return to his post at third base. I'm happy with that. Blake isn't a star, but he will get himself dirty, and he came through for L.A. late in the season last year. Indians fans loved the guy, and I'm looking forward to what Blake can do for the Dodgers in a full season. The deal is for three years. I don't know if Blake, who is 35, is worth that long of a contract. 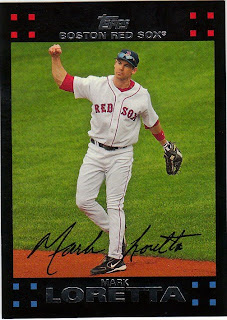 Meanwhile, the Dodgers agreed to terms with infielder Mark Loretta, which I think is nice pick-up. He can play three infield positions (he once pitched, too!). He is a great pinch-hitter and quality left-handed bat. He had several good seasons for Milwaukee and a couple great ones for San Diego. He's not that kind of player anymore at age 37, but he's nearly a .300 career hitter with a .361 OBP. He's also good insurance for DeWitt at second and for whomever the Dodgers decide to throw out there at shortstop.

Loretta, like Jeff Kent, doesn't have much range or a great arm. But he is one of those guys that I always wished could play for my team.

Eric Stephen said…
I really like the Blake deal because it's so affordable (I expected him to get something like 2/18, so this is great). I really like Loretta too as the utility guy, pinch-hitter, and essentially a platoon partner with DeWitt.

I really hope they sign CC as well. I would explode with joy if both CC & Manny were signed, but I don't think that will happen. I'll settle for the giddiness of a Furcal/CC combo or something similar. :)
December 9, 2008 at 9:28 PM

gcrl said…
so, half of our infield is set. i like loretta as well, although i also had high hopes for jose valentin.
where have you gone, olmedo saenz...
December 9, 2008 at 11:13 PM

capewood said…
Loretta had a couple of good years in Houston as a part-time player and was liked here. Good luck to him in Dodger land.
December 10, 2008 at 6:54 PM