Back that thing up 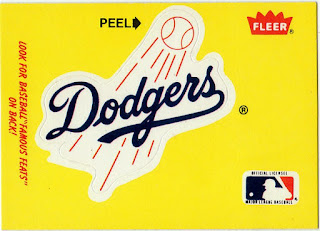 OK, mind out of the gutter everyone. There are plenty of other web sites for that sort of thing. This isn't one of them.

What I'd like to do with some of these cards that I received from Dan of Saints From the Cheap Seats is focus on the backs. The fronts get all the glory with their pretty pictures, their refractors, their stained glass and cloth swatches and bat bits. But I'm a word guy, and I find interest and amusement in what is written on the back.

A note or two first about Dan. I had finally gotten to the point about two weeks ago where I could assemble some cards and send them off without someone having sent me something first. That handful of cards went to Dan. A few things off his want list. But before I could actually feel proud of my miniscule gesture, I received a package in the mail a mere couple of days later from none other than Dan. He had done the same thing I had just done, except with a much larger stack of cards. And now I'm way behind on packages to send. Gee whiz. I'll get this card trading thing down some day.

Inside the package was a note that said, "Joshua and I thought you could use some more Dodgers." I don't know who Joshua is. I've read Dan's blog for awhile now. I don't remember any mention of a Joshua. There was a photo of a cat on the address label, so I'm going with that: Dan's got a cat and his name is Joshua. Which would be cool, because my brother has a cat and his name is Joshua, too.

All right, back to the cards. For you folks who only read this blog for the pictures, I'll show a few card fronts first. But then after that, every card front gets a corresponding back, and everyone will just have to deal. 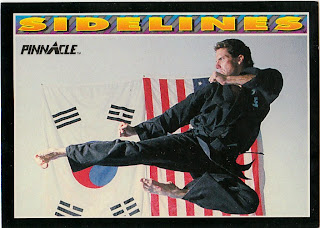 First we have Jim Gott, 1992 Pinnacle, Sidelines subset. I wasn't crazy about these when they came out. I want my ballplayers to be ballplayers on the cards. This isn't GQ. I do admit, though, the photo is cool. 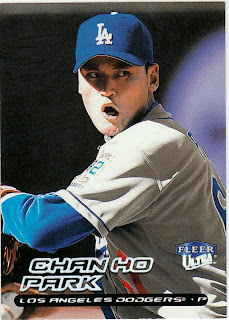 Chan Ho Park, 2000 Fleer Ultra. Did you know that Park belches in mid-delivery each time he throws a pitch? Thanks for pointing that out, Fleer Ultra. Mike Piazza, 1997 Pinnacle. I am not comfortable with where Piazza's right hand is. And I'm sure I'm not the only one. 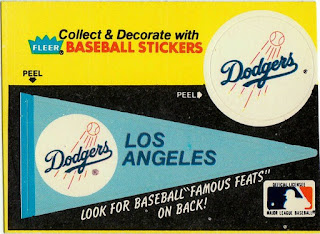 Here begins the fronts with accompanying backs. Dan sent along some stickers, which is always wonderful. I love the old-school pennant on this one. 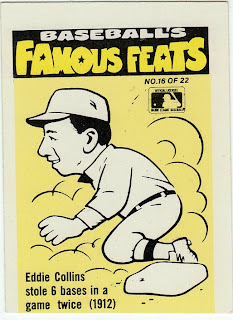 This is the back. The Famous Feats series. I don't know what Fleer set these stickers are from. Possibly 1986? It's obviously from a year that I didn't collect Fleer. Wish I did though, just for the sticker backs. 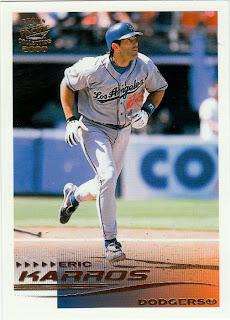 Eric Karros, 2000 Crown Pacific Collection. If it's Pacific, then you know where I'm going when I mention the back ... 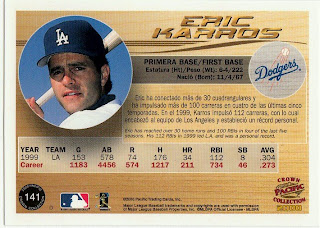 ... That's right -- ESPANOL. It's hard to read here, but apparently the spanish word for home runs is cuadrangulares. I took four years of Spanish in high school. I never learned the word for "home run." That's a tragedy. 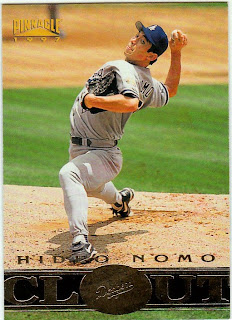 Hideo Nomo, 1997 Pinnacle. Clout must be a subset or something? Where'd they come up with these names? Clout? Sounds like a good name for a car. "Come drive the 2009 Dodge Clout." 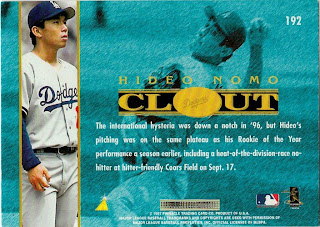 I love these 1990s write-ups. It begins: "The international hysteria was down a notch in '96." International hysteria? Were the people in Nepal and Uruguay beside themselves when Nomo took the mound?
Then later in the same sentence (yes, it is a 42-word sentence, which would give my journalism professor a heart attack), is the following phrase: " ... including a heat-of-the-division-race no-hitter at hitter-friendly Coors Field on Sept. 17." They must have marked down hyphens in 1997, and Pinnacle bought a couple hundred boxfuls. 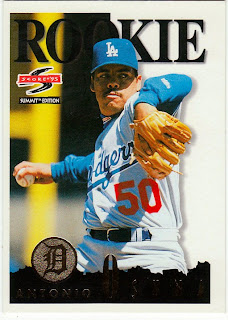 Antonio Osuna, 1995 Score Summit. I'm baffled by the gold-foil Detroit insignia on the front. Anybody? 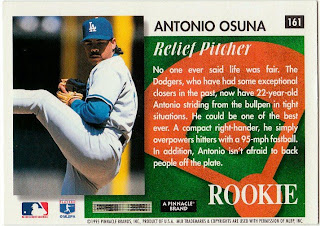 The back offers a valuable lesson in what happens when you get into the business of predicting the future. It says, *ahem*, "The Dodgers, who have had some exceptional closers in the past, now have 22-year-old Antonio striding from the bullpen in tight situations. He could be one of the best ever." Maybe one of the best striders ever. Because he didn't come close to doing anything exceptional closing. I don't even remember anyone expressing much hope that he would be an all-time great closer. 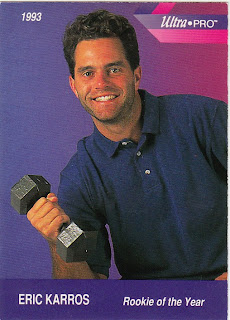 Eric Karros, 1993 Ultra Pro. Cards like this give me the willies. I don't need a card showing me why Eric gets the ladies. Only if you balance it out with a corresponding card of Jennie Finch or Catherine Zeta Jones or Jaime Pressly. Otherwise, stick with the ballplayer shots. 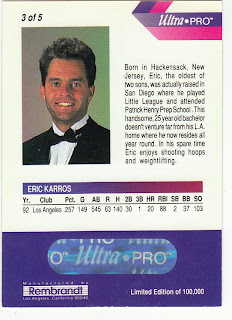 More gosh-golly-gee on the back. Karros in a tux. I'll read this in my best Jim Lange "The Dating Game" voice: "This handsome 25 year old bachelor doesn't venture far from his L.A. home where he now resides all year round. In his spare time Eric enjoys shooting hoops and weightlifting." Well, be still my beating heart. 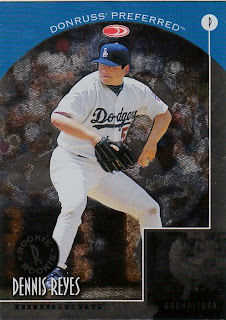 Dennis Reyes, 1998 Donruss Preferred. Very nice-looking card, but here's the most pretentious name for a card brand ever. Preferred? Where's Donruss Average? Donruss Just Getting By? Donruss Down to Earth? Why so snobby Donruss? 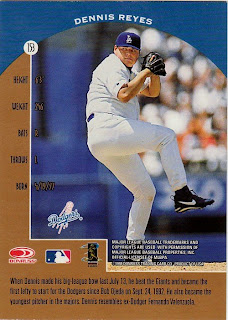 The back lists Reyes' performance in his big-league debut against the Giants. Apparently, the writer didn't feel as if he got across Reyes' worth with that sentence because he adds this: "Dennis resembles ex-Dodger Fernando Valenzuela." Nuh-uh. Yeah, he's Mexican, left-handed and largish. What else ya got? 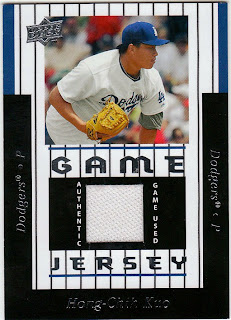 Finally, a Hong-Chih Kuo, 2008 Upper Deck Game-Used Jersey card! Thanks, Dan!
And the back? Well, it's some guy named Richard P. McWilliam saying something about certification and memorabilia. I think I'll pass on showing the back of that card.
Many, many thanks, Dan. You're too kind. I'll have to pay your want list another visit.

madding said…
The Famous Feats sticker backs are definitely from '86 Fleer. Most of my '86 Fleer cards are in lousy shape, unfortunately, and I doubt I kept most of the stickers.

I got a card similar to the Antonio Osuna card, maybe even from the same set, where Terry Bradshaw has a gold-foil Brewers logo on his card. As hard as it is to find information on a guy with a name like Terry Bradshaw, I couldn't find any evidence that he was ever a Brewer.
December 2, 2008 at 7:21 AM

Dan said…
Joshua is my son, not my cat, although sometimes I wish he would keep as quiet as one.

As for the cards, Wow, they look pathetic compared to the others you get. I guess I'm gonna have to send some better cards next time. And don't worry about this being a race to see who can send out more cards. I've got lots, so when I get a good enough pile, I send 'em. I'm not expecting anything back.
December 2, 2008 at 8:45 AM

I guess I guessed wrong, eh? :P Sorry about that.

The cards you sent were great, no need to up the quality or amount. And thanks for the reassurance on the card trade off. I'm certainly not intending for it to be a race, because I could never equal other people's collections. I just like seeing others get their fair share. If you and other traders are happy that's all I want.
December 2, 2008 at 11:54 AM

capewood said…
Ultra Pro makes album pages for cards. They used to package one sports card with a package of pages. I think I only ever got football or basketball cards with the pages I bought. If you were an Eric Karros collector (and I was once) that Ultra Pro card would be a hard one to find.
December 2, 2008 at 9:27 PM