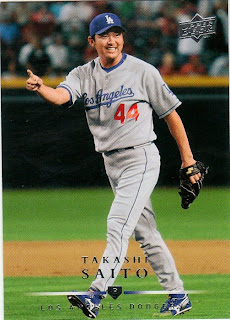 The Dodgers have shown Takashi Saito the door (he seems pretty happy about it, doesn't he?)

I'll miss him. With Saito a free agent, that leaves Jonathan Broxton in the closer's role. I'm not completely comfortable with that, mostly because we Dodger fans have been spoiled with Saito and Eric Gagne the last five years, and Broxton can't match their kind of day-in, day-out domination. Broxton probably just needs another year of maturity. I think he'll be all right.

Meanwhile, while the Yankees are throwing cash at pending disasters, the Dodgers still need a starting pitcher, a set-up man for Broxton, a shortstop, and Manny to come to his senses. That's a lot of work to do, considering the winter meetings are done and L.A. doesn't want to give up much of its talent trade-wise.

So since the trade route doesn't look good at the moment, here's a look at what free agents are still out there in each key category:

So, it looks like ol' Ned will be working through Christmas vacation. Better pack a lunch, or two, or three.

And another question: who will wear No. 44 now?