It's Gordon and that's all 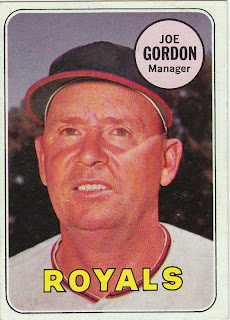 Only Joe Gordon, a World War II-era second baseman for the Yankees and Indians, was elected to the Hall. Gordon was part of the group of pre-1943 players considered by one committee. Meanwhile, the other committee, asked to select from 1943-present players, picked no one. AGAIN.

I don't understand how this is possible unless people on the committee have their own agendas. Either multiple committee members are pushing their own individual player, or maybe a number of committee members don't even want anyone in the Hall, and that's their agenda. I really thought with this change in the process that someone from the post-1943 group was going to get in.

I realize it should be difficult to get into the Hall. But I think it's getting too difficult. Committee members need to start coming to some sort of compromise, or the Hall should just boot them all and think of a new way to vote in players. 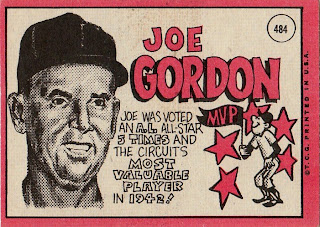 From the pre-1943 group, I would've liked to see Mickey Vernon get in. But I'm not very good at judging whether players from 60 years ago deserve to be in the Hall. It was such a long time ago. Gordon appears to be deserving. That period of time where the talent was watered down because of the war makes me wonder a little. But his numbers look good.

As for the numbers for Ron Santo, Gil Hodges, Dick Allen, Jim Kaat, Luis Tiant, Maury Wills, Vada Pinson, Tony Oliva, Joe Torre and Al Oliver, they look good, too. Santo, Hodges, Torre and Wills definitely belong in the Hall. Probably a couple others should be there, too.

Dave said…
I don't mind that the Veterans Committee hasn't been voting in many players. Truthfully, if a player wasn't good enough to be voted in by the writers, he's probably not a Hall of Famer anyway. Ron Santo is a definite exception, and he should get in someday soon. Joe Torre will go in someday too - but more for what he did as a manager than as a player. Other than that, I'm glad that the rest are not getting into the Hall.
December 8, 2008 at 5:53 PM

madding said…
Joe Gordon, as I just found out today, played baseball at the University of Oregon. The Ducks are restarting their baseball program next year for the first time since the early 80s, which I think is pretty cool.

gritz76 said…
Last time Santo missed by 5 votes. This time he missed by 9. Ryno should of added a vote so that means he actually lost 5 votes, WTF! I used to dream of the day I finally got to visit the Hall of Fame but right now I could give a damn if I ever get there.
December 8, 2008 at 10:41 PM

MMayes said…
This is a backlash to too many "cronies" getting into the HOF too easily and diluting it. It was decided to let the HOFers themselves vote and if they thought someone was deserving, so be it.

Santo was a good player for a long time, but why didn't the writers vote him in? He was certainly a popular player in a major media market. I started following baseball in 1971, so I didn't get in on his best years, but in the early 70's when someone talked about the Cubs it was (definitely in this order) 1. Ferguson Jenkins, 2. Billy Williams and 3. Ron Santo. Santo has developed a following doing the radio games and I think that's a lot of the angst over his failure to join the HOF.
December 9, 2008 at 1:13 PM