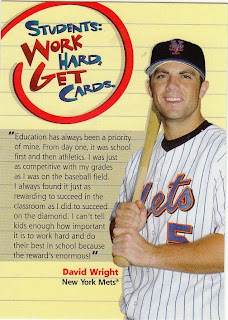 I'm not dumb enough to consider "Work Hard, Get Cards" an insert, but think about it for a minute: It's not part of the base set. It's randomly inserted in packs; you don't get one in every pack. That's the definition of an insert, right?

OK, enough foolishness. This is where I count down the inserts/subset cards I got in the various packs I purchased since November. Fourteen separate packs yielded what I'm about to show, and it's a pretty depressing lot. I like the last card, and that's about it. What follows pretty much sums up what you got in retail packs in 2008. Or at least what I got. These cards and the rest, listed along the sidebar, go to the winner of the contest. You can get the rules and enter here. 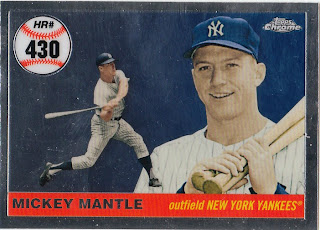 11. Mickey Mantle, Home Run History, No. 430, Topps Chrome. This is a waste of valuable chrome. Get these out of the chrome set. 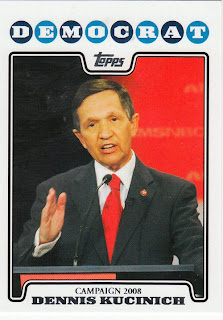 10. Dennis Kucinich, presidential campaign subset, Topps Series I. You see correctly; I ranked Kucinich above Mantle. That's because Mantle cards have been annoying me for about four years now. The presidential cards are only a recent annoyance. 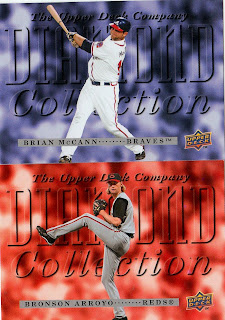 9. Brian McCann and Bronson Arroyo, Diamond Collection, Upper Deck Series 2. Was anyone thrilled to get these cards? They almost look like advertisements, instead of cards. 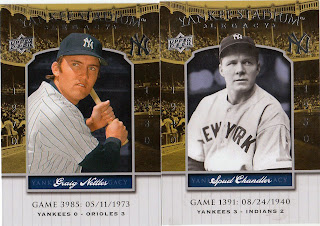 8. Graig Nettles and Spud Chandler, Yankee Stadium Legacy, Upper Deck Series 2 and Upper Deck X. YSL cards don't quite tick me off as much as others. They have no value to me, I know that. But I can see the attraction for Yankee fans. My question is when is Upper Deck going to genuflect before the 29 other teams that make up Major League Baseball? 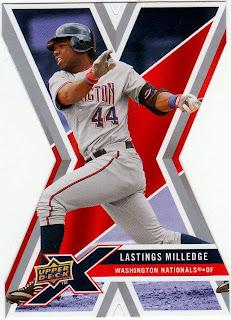 7. Lastings Milledge, Upper Deck X die-cut. This barely qualifies as a card. Good thing it's not Upper Deck I. That'd be one skinny "card." I'm wondering, if you remove the hanging-chad type things does that decrease the value of the card? (Everyone now: "No because Upper Deck X doesn't have any value." Ba-dump-bump.) 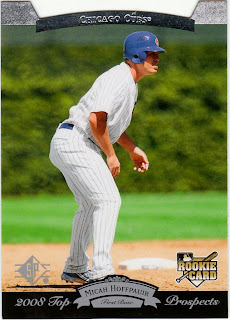 6. Micah Hoffpauir, Upper Deck Timeline, SP die-cut. This is a better use of the die-cut, although still not a fan. Card is cut a little rough on the right side. 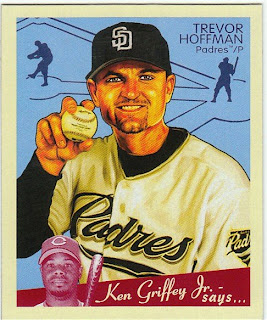 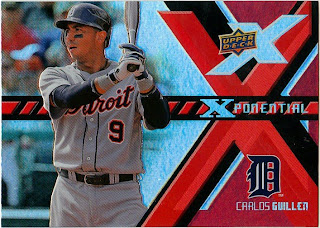 4. Carlos Guillen, Upper Deck X, Xponential. I agree fully with everyone. If these were the base cards it would be one heck of set. 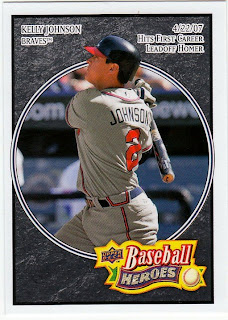 3. Kelly Johnson, Upper Deck Baseball Heroes, charcoal variation. I don't know what the deal is with me and Kelly Johnson cards this year. At one point I had four different Heroes variations of Johnson, and I was pulling a Johnson chrome card out of every other pack.
I'm not a Heroes rainbow chaser. I like the idea of chasing rainbows. I also like the idea of getting paid to write this blog, and that's not going to happen. 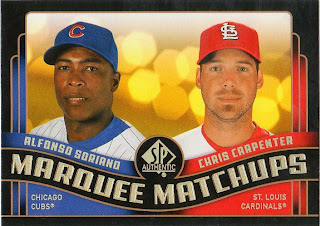 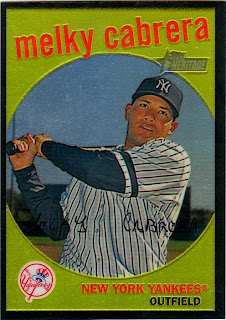 1. Melky Cabrera, Topps Chrome black border (19/59). Nice card. This is the first one of these that I've pulled from a loose pack. And the best of a fairly sorry bunch of inserts/subsets.
That will do it for the 2008 card countdowns. I'll post one last farewell to 2008 tomorrow. Then it's on to "aught nine"!

Ryan Cracknell said…
Hoffman looks like he belongs in Lord of the Rings on that Goudey card. Maybe the ball is his Precious.
December 30, 2008 at 4:08 AM